The many lives of U dvou Koček

The many lives of U dvou Koček

Copy
The many lives of U dvou Koček
Length of audio 6:00
U dvou Koček, photo: Ondřej Tomšů
Download
Share

U dvou Koček, At the two Cats, is bang in the middle of Prague’s Old Town not far from Wenceslas Square. That’s been a boon in some senses but also a problem as the traditional brewery and restaurant try to juggle keeping locals and thirsty and hungry tourists with many Czechs moving out of the centre and into the suburbs. Manager Roman Pohanka explained some of the history of the that has been put together of the pub although many gaps in the chronology still remain.

U dvou Koček, photo: Ondřej Tomšů
"The last thing we discovered was that around 1920 the name of the house, which was itself very historic going backed to the 13th century, changed. And the name U dvou Koček (At the two cats) came into being. No-one knows what was the reason whether it was due to the owner or what, but people started saying that. When the restaurant was created later the name struck and the sign on the restaurant was "At the Two Cats Restaurant." In the 1960s and 1970s it became well known and popular as a restaurant selling Pilsen beer. It was recognised as a traditional place and that has remained until today.ʺ

The pub appears have been established on some already alcoholic foundations and later came to be owned by the central Prague 1 district council. An interesting example of municipal entrepreneurship.

Roman Pohanka, photo: Ondřej Tomšů
ʺThanks to one writer who not long ago produced a book about our restaurant, it was discovered that up till 1910 a wine seller operated on the site. Mr Dragicevic was a Croat who sold wine across all of Prague and had one outpost here as well as in Korunní Street. During the war the wine sales business was taken over by his nephews. We have documents describing how a large scale reconstruction took place here at the Brač winery. We have been able to find that out from the archives but further searches have not been able to determine when the restaurant itself came into being. It was later nationalised and came under the control of the Prague 1 district as a Pilsner beer restaurant."

At its inception as a pub, U dvou Koček probably did not stand out much from its rivals as central Prague pub for local, or Štamgast to use the Czech phrase derived from German. But the city has changed and the locals in the city centre now have a much more transient character. 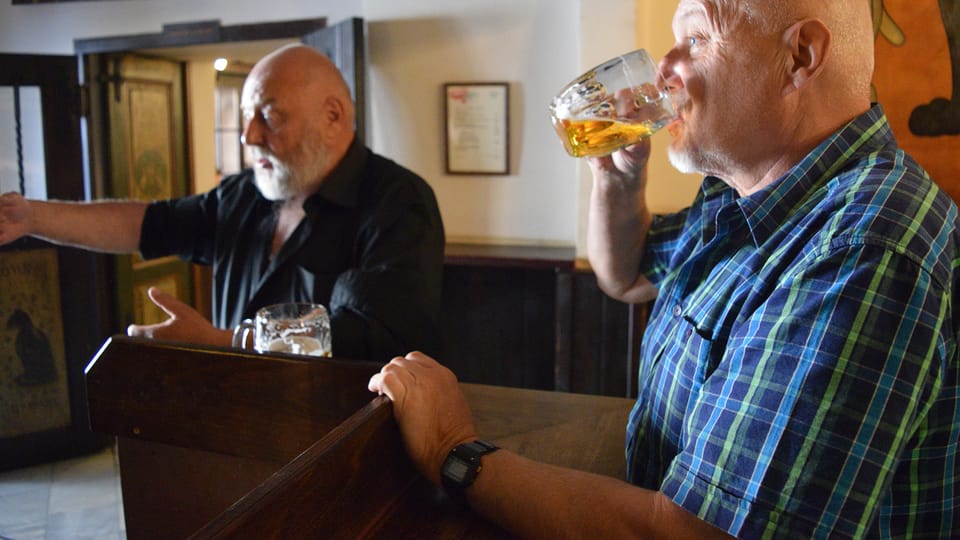 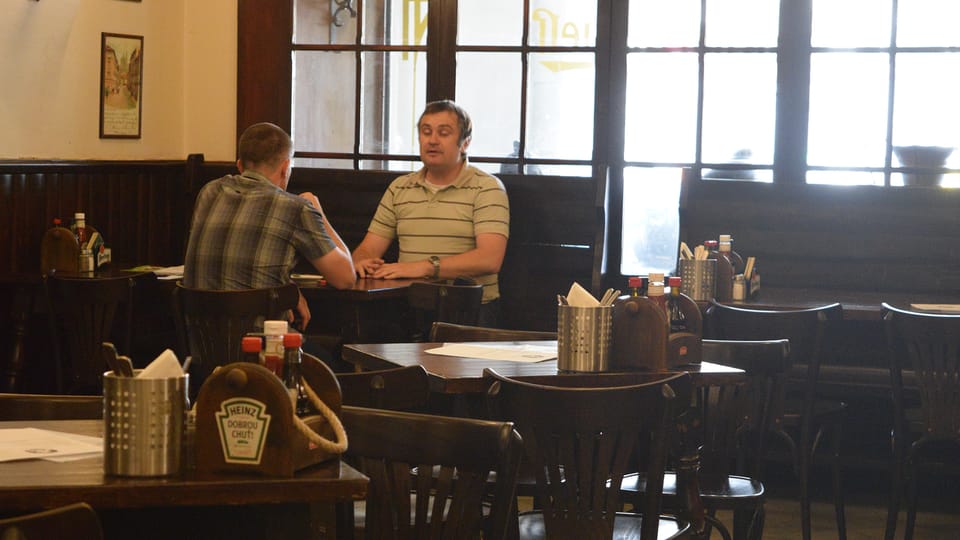 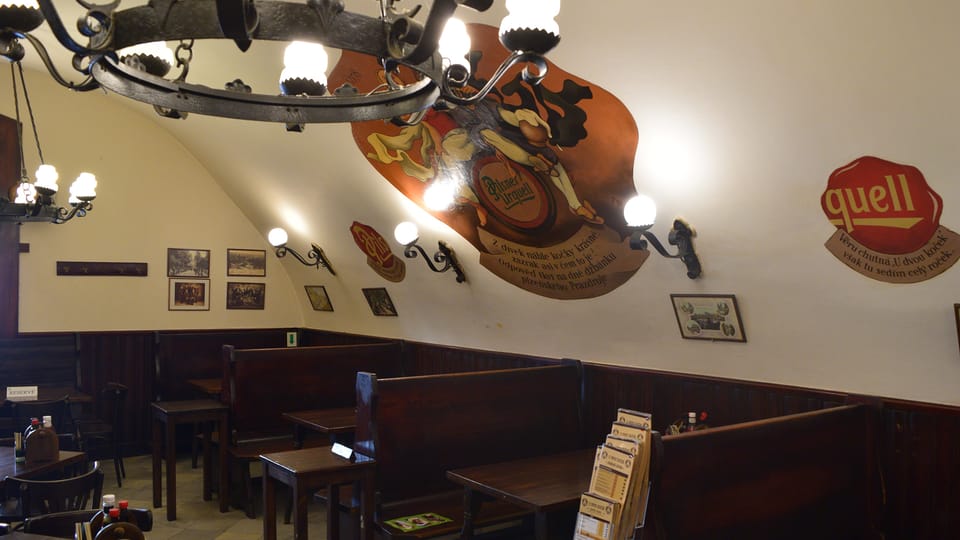 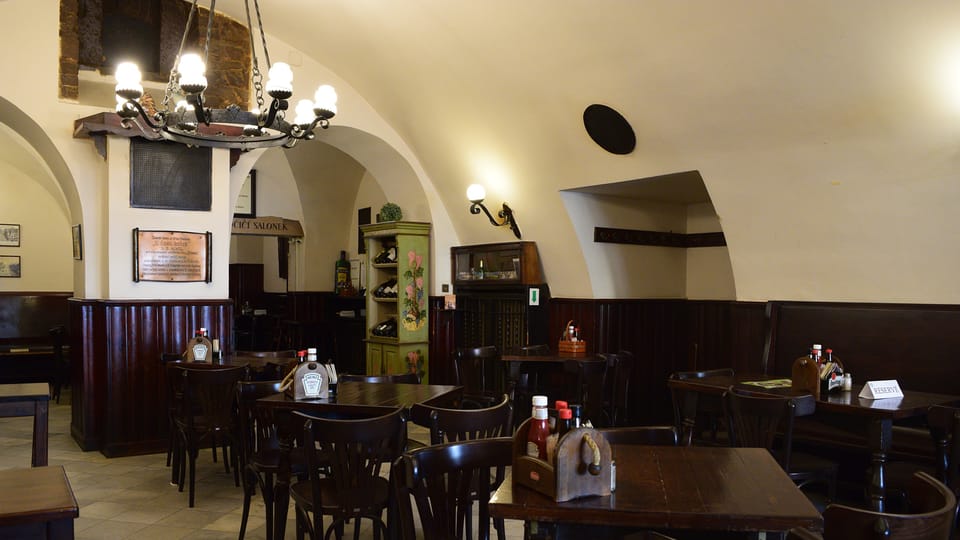 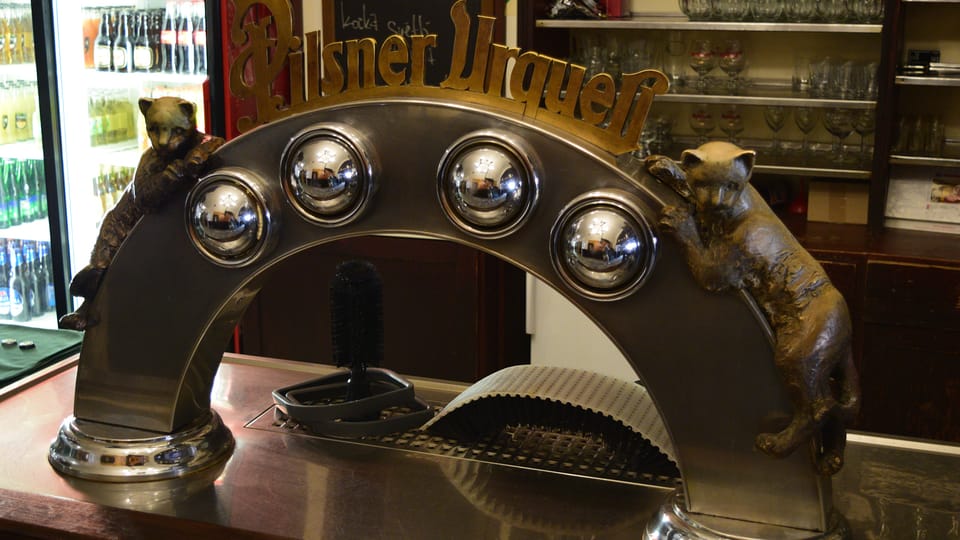 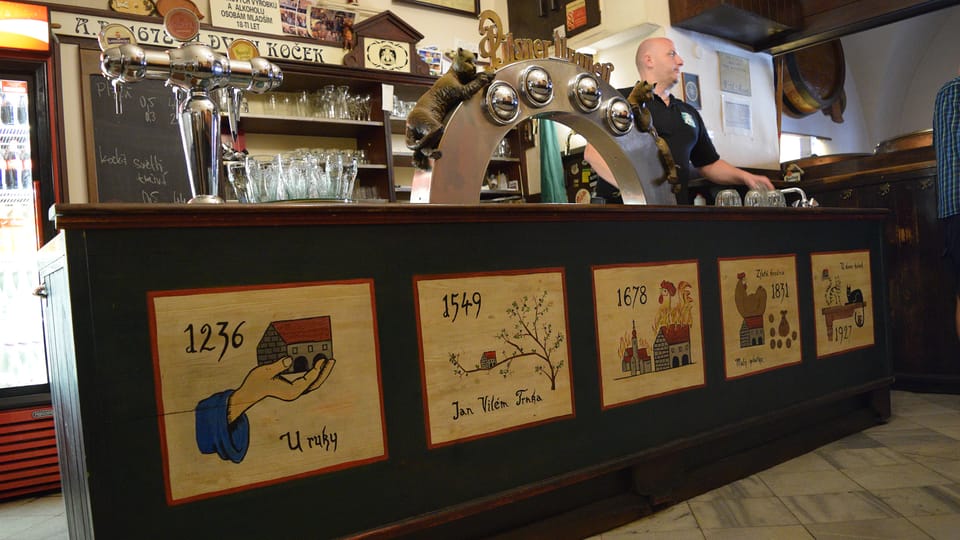 "There was a period when we did not stand out that much but were the same as the rest. But due to the economic situation and the increase in rents it came about that a lot of traditional pubs disappeared and there are now a lot fewer of them and many had to change. The centre of Prague is no longer inhabited by local people because they have moved out. There are a lot of firms and businesses here and the traditional pub which was full of regulars has often gone. Today there are around 70 percent of Czechs at midday having a meal but that percent is turned around in the evening when foreigners seek out traditional restaurants for something to eat."

U dvou Koček, photo: Ondřej Tomšů
That evolution has, so to speak, been the mother of invention with the pub and restaurant deciding a few years ago to take a bold step into the unknown and start brewing itself. The results appear to have paid off.

"Around seven years ago we widened our offer of traditional Pilsner beer by creating our own mini brewery. We created the mini brewery and produce lager and dark beer. We use the At Two Cats label with a light and dark cat. That differentiates us a bit. We are still selling the traditional Pilsen beer as well. Together with one or two other pubs we therefore have beer from one of the big brewers and our own domestic production.ʺ

At the time, the pub was one of the pioneers in the Czech micro brewer new wave.

U dvou Koček, photo: Ondřej Tomšů
ʺIt occurred to us that beer was becoming too expensive in the centre of Prague for people who worked in the centre and wanted a beer at a reasonable price. The owner then came up with the idea, I had a share in it, that we would set up our own mini brewery which, of course, has a bit higher profitability. And the idea was that with at more reasonable prices we could maintain our customers and continue to serve Czechs and not just tourists. That was the primary aim. Later we found that it people were really interested in this. It was the time, in February 2010 when we started to construct the brewery and May when production started, that there were then around just over 100 mini breweries. Now there are more than 300 such breweries. So it was a good idea and interest has increased in that Prague tradition where almost every second house had the rights to produced beer and actually made it."

There’s another reason for visiting the pub which will resound with Czechs but likely be lost on those from further afield. The pub was the backdrop for some scenes from the 1981 hit Czech comedy Vrchní prchni [Run Waiter, Run] which recounts how a father tries to get rich quick by pretending to be the head waiter collecting cash from customers. The pub prides itself as having hardly changed since those days.