A tailor made Prague beer institution

A tailor made Prague beer institution

Beer is an important part of Czech culture. Czechs love to drink beer and the country’s numerous pubs are veritable hubs of social activity, where Czechs grumble about politics, talk about the weather and discuss the hot issues of the day over several pints of beer. In a new mini-series Radio Prague will take you to some of Prague’s famous pubs.

U Pinkasů, photo: Ondřej Tomšů
The legendary pub U Pinkasů is located in the centre of Prague, not far from Wenceslas Square. It was the first pub in Prague to offer its customers beer produced in Pilsen by the Prazdroj brewery. The history of the famous Pilsner Urquell, brewed since 1842, is closely linked to that of the restaurant, explains Karel Doubek, general manager of the company, which owns the establishment:

“The first Mr. Pinkas was called Jakub. He was originally from Budětice, a small village near Plzeň. He was a tailor by profession and had come to Prague with his wife for an apprenticeship. They moved into a downtown house where he made clothes, among others, for the monks of the nearby Franciscan monastery.

“Jakub Pinkas had a friend, Martin Salzmann, who was a carrier from Pilsen, and who would often sleep over at his house. One day, it was in April 1843, Salzmann brought him two barrels of beer, which they had just started brewing in Pilsen.”

Jakub Pinkas wasn’t exactly sure what to do with so much beer, so he put it in the cellar and started offering the brew to his customers. As you can imagine, people quickly took a liking to the Pilsen beer and started coming for the drinks rather than to have their clothes made.

Karel Doubek, photo: Ondřej Tomšů
Eventually, Jakub Pinkas decided to hang up his craft as a tailor and make a living as an innkeeper instead. His lack of experience in the business actually proved to be an advantage, explains Karel Doubek:

“At the time, beer was served in large jugs, which would stand on the tables, and people would pour the beer directly in their glasses. Because of that, the beer didn`t taste so good, but it saved a lot of work for the waiters.

“However, Jakub Pinkas didn’t know this and he would fetch the beer in the cellar, pouring it into the glass straight from the barrel. The quality of the beer vastly improved and in turn attracted even larger crowds.”

U Pinkasů soon became a center of Czech society and culture. A great number of famous people started frequenting the tavern, including actors, politicians and intellectuals of the National Revival movement, such as František Palacký or Josef Jungmann. Among regular guests was also president Tomáš Garrigue Masaryk and his son Jan.

In the 1950s, the pub was confiscated by the Communists and it only returned to the former owners’ hands after the revolution in 1989. The current owners acquired the tavern in 2001. Today, the place still looks very much like it did at the time of its greatest fame. Karel Doubek confirms that this was a deliberate choice:

“When I started my business I discovered that the owners of other traditional pubs in Prague try to preserve their genius loci or the spirit of the place. I admit that when I took over the management of the pub, I wanted to make innovations. But it wasn’t the trend then, and nor is it today.

U Pinkasů, photo: Ondřej Tomšů
“On the contrary, the tendency is to preserve tradition, because people are attached to it. That is why our policy is to return to what was being done and existed at the time of the National Revival or the First Republic.”

With its small terrace and a few windows facing the street, you might easily walk by U Pinkasů without actually noticing it. But once you get inside, you discover a whole new world full of history. Karel Doubek again:

“If we count all the rooms, including the gardens, we could accommodate up to 600 people. The pub takes up more than three floors, including the basement and Gothic cellars. The ground floor is attended by regulars. Next to it you can see the historical kitchen.

“But at this time of the year, I think the most beautiful place is the Gothic garden, which we say is a garden with Gothic air conditioning. Even when it is hot, the thickness of the walls of the courtyard keeps you cool. The conditions are ideal for tasting the Pilsen beer.”

Along with the Pilsen beer, which has been served at U Pinkasů for nearly two centuries, you can also taste some of the great variety of foods, which are inspired by traditional recipes. And you can discover another legendary Prague pub, U Fleků, in the next edition of our miniseries. 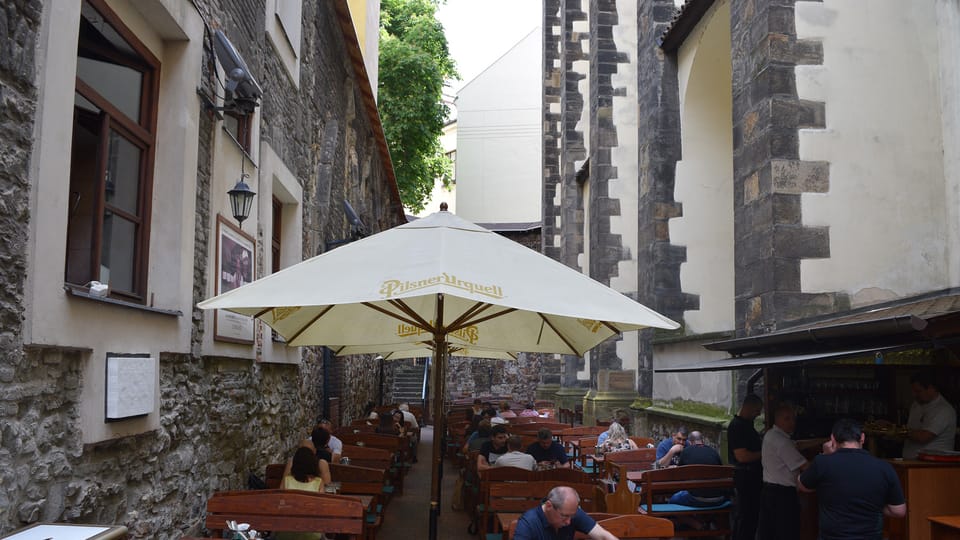 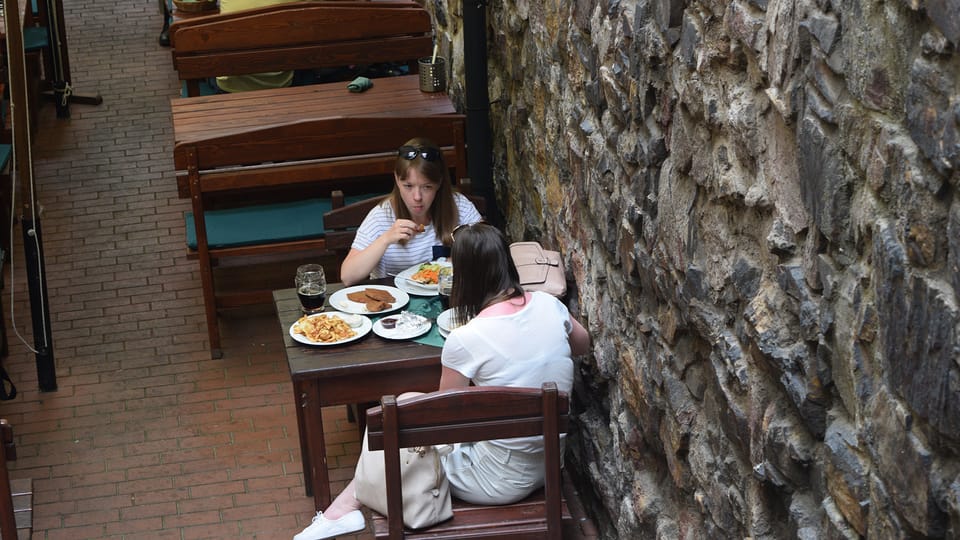 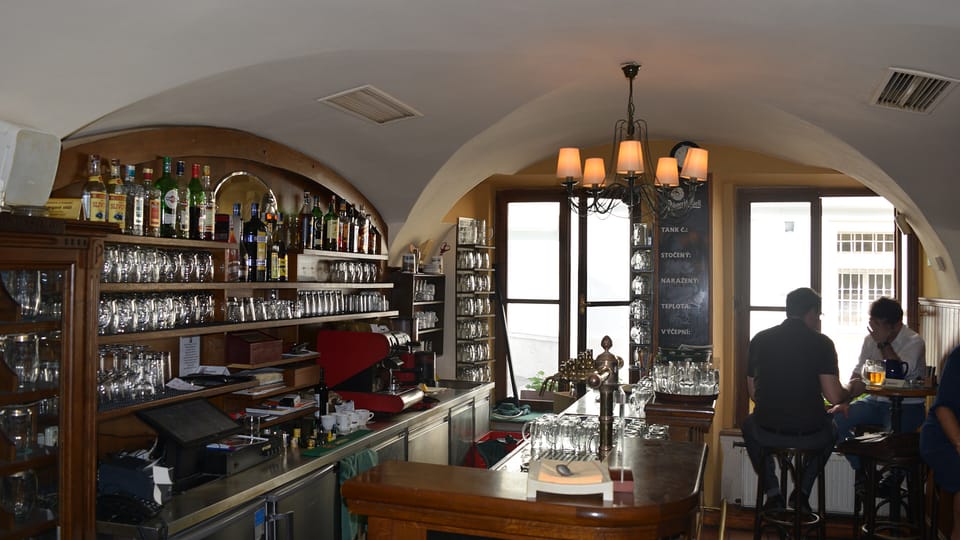 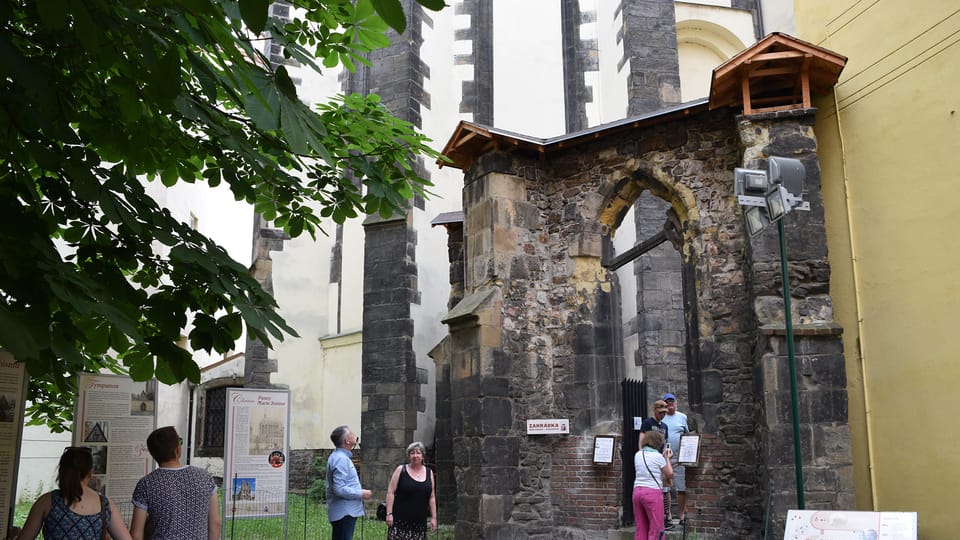