The Winternitz Villa in Prague is housing an exhibition titled “No night so dark”. It documents the history of a successful Czech-Jewish family, the Wels’, which was almost completely wiped out during World War Two. The exhibtion, which houses many of the family’s objects and documents that survived the Holocaust, will later move to Germany as well as possibly Britain and the US.

Those who have visited Prague know that outside the city centre there are many picturesque villas built during the nineteenth and early twentieth centuries. One of them, the Winternitz Villa in Prague 5, now offers a real opportunity to get a feel for what life inside may have looked like during the interwar era.

As part of the exhibition “No night so dark”, its rooms are the filled with the valuables and personal memorabilia of the Welses, a remarkable Czech-Jewish family whose memory was nearly wiped out as a result of the Holocaust.

Their story was uncovered only relatively recently and brought to Czech attention thanks to journalist David Vaughan, who researched the Wels’ and created a Czech Radio series depicting their life during the Czechoslovak First Republic.

Mr. Vaughan, who is also the curator of the exhibition curator, says the history of the Wels family stretches back several generations.

“They lived in Western Bohemia, in the country not far from the city of Plzeň. They were a Jewish family.

“In the second half of the nineteenth century, Šimon Wels, who was a quite successful shopkeeper with a shop on the village green, was extremely interested in the world around him and did his best to get his children a good education.

“He managed to get his son Rudolf into the Catholic grammar school, which was quite uncommon for a Jewish family. Furthermore, when he discovered that the grammar school was not giving his son a good education, he had the cheek to go to the friars there and tell them that he will be moving his son to another school.

“He sent them to the technical school, which was the best thing that he could have done, because Rudolf went on to study at the Vienna Academy and went on to become an architect."

As a student in Vienna Rudolf Wels was able to learn from some of the best in the business. Among his tutors was one of the great architects of the twentieth century - Adolf Loos - who is also the architect of the villa where this exhibition is taking place.

Rudolf not only studied under Loos, but also worked with him and designed many buildings in Western Bohemia in the spirit of his great tutor. 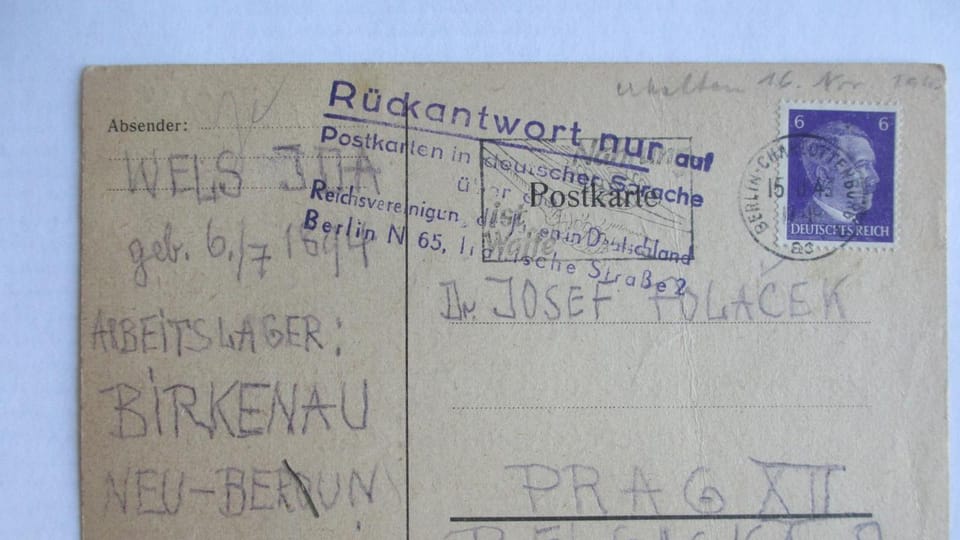 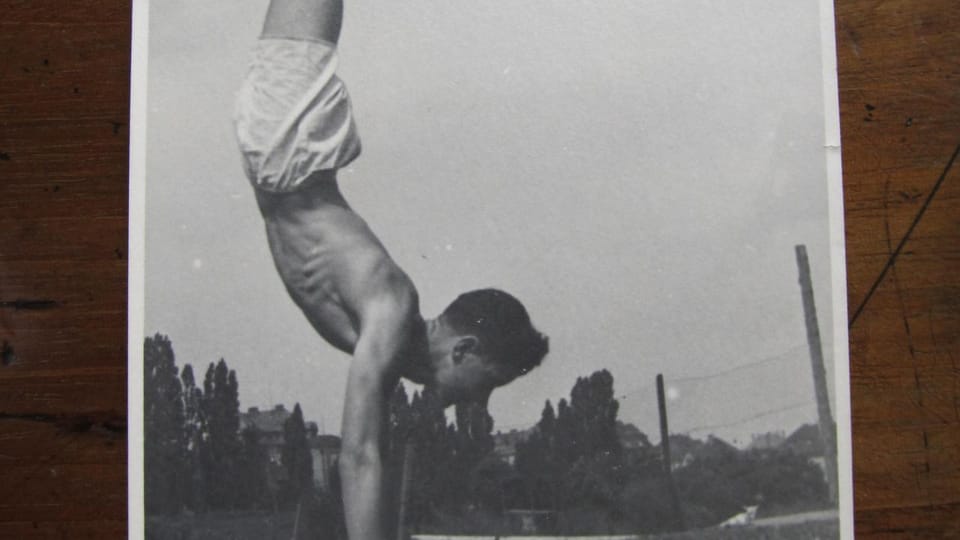 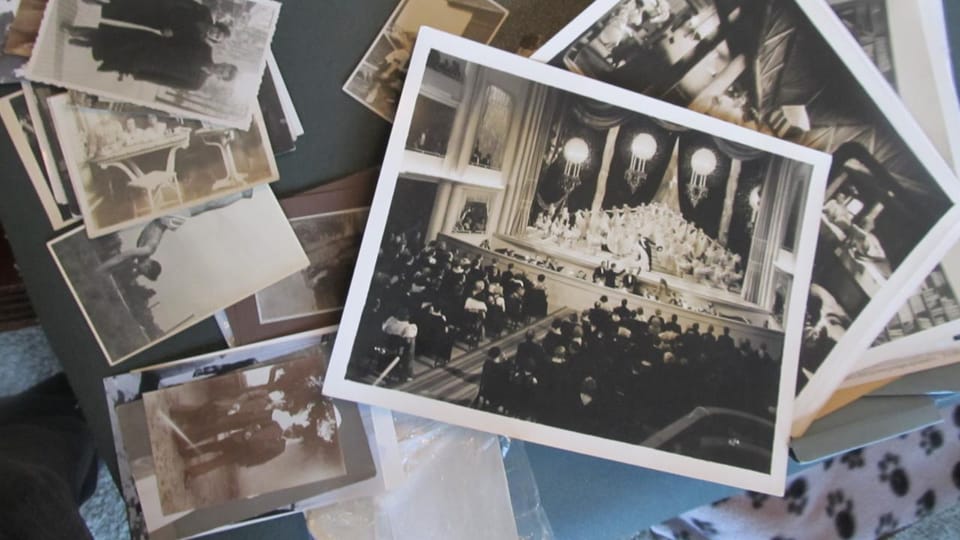 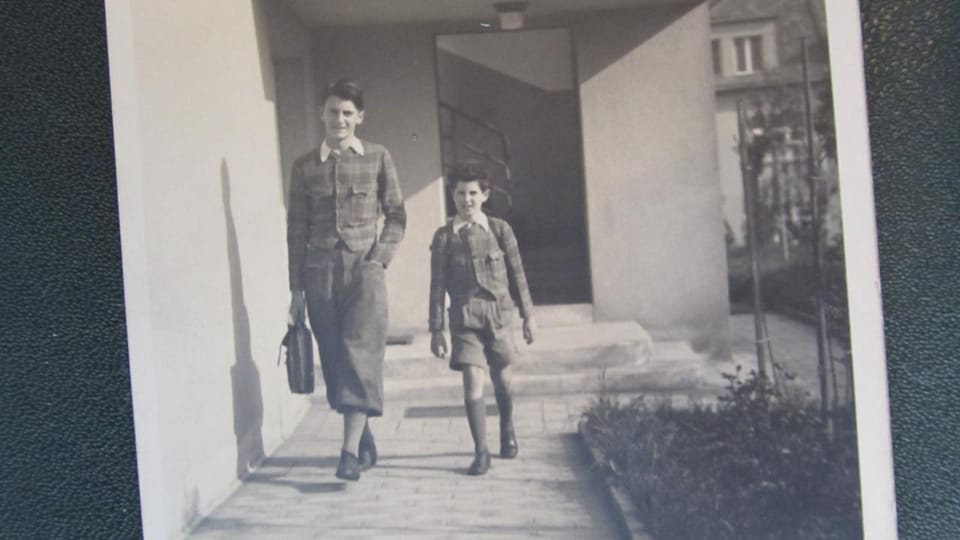 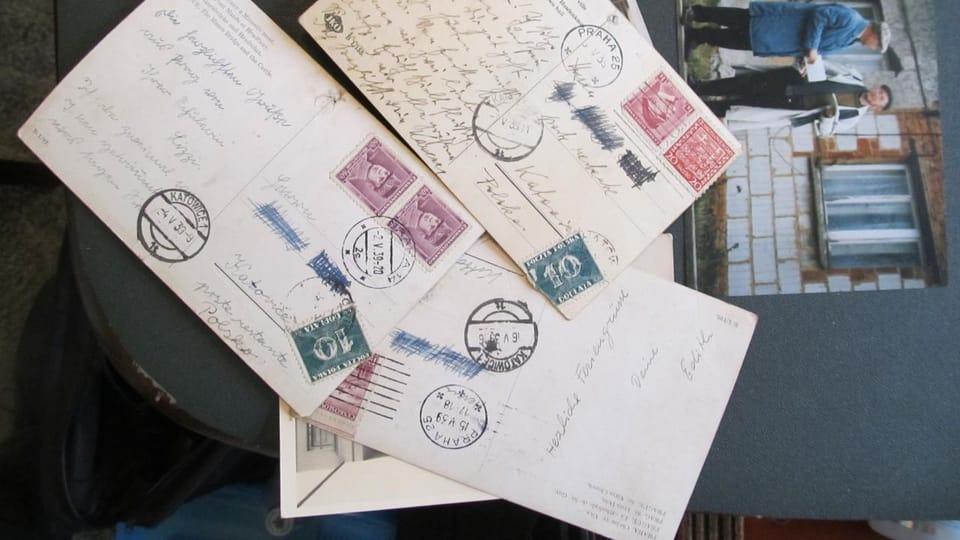 David Vaughan says that this was not the only area of design that interested Rudolf Wels.

“What is interesting is that in the 1930s he moved with his family to Prague. Not only did he build many interesting buildings in Prague, many of which you may have seen without being aware of who designed them, but he also worked as a designer for film. Together with his partner Guido Lagus, they did the architectural designs for one of my favourite Czech films called “Hej Rup”, a wonderful pre-war comedy.”

Rudolf Wels and his wife Ida had two children, both boys. Towards the end of the 1930s, the younger son, Martin, was 13-years-old and was already showing considerable artistic talent. He began creating a book together with his brother, says David Vaughan who used it as a source in his series.

“They wrote this absolutely wonderful book. It is made up of scenes from their daily life and is illustrated by Martin and it gives an incredible picture of the life of a middle-class family in the 1930s.

“You can identify with them. You can feel that you know them. At the same time, it is also deeply unnerving, because Martin, Ida and Rudolf were murdered by the Nazis in Auschwitz. Only Tomáš, the older brother, survived by escaping to Britain.”

Tomáš managed to escape to Britain and worked as a cook during the war in the RAF. Immediately after the war, he returned to Prague to see if he could find his family. However, he quickly realised that no one had survived. However, his relatives had the foresight to leave all of their most treasured items with their friends, a family called Schtifter which lived just behind the Czechoslovak Radio building in Prague 2. 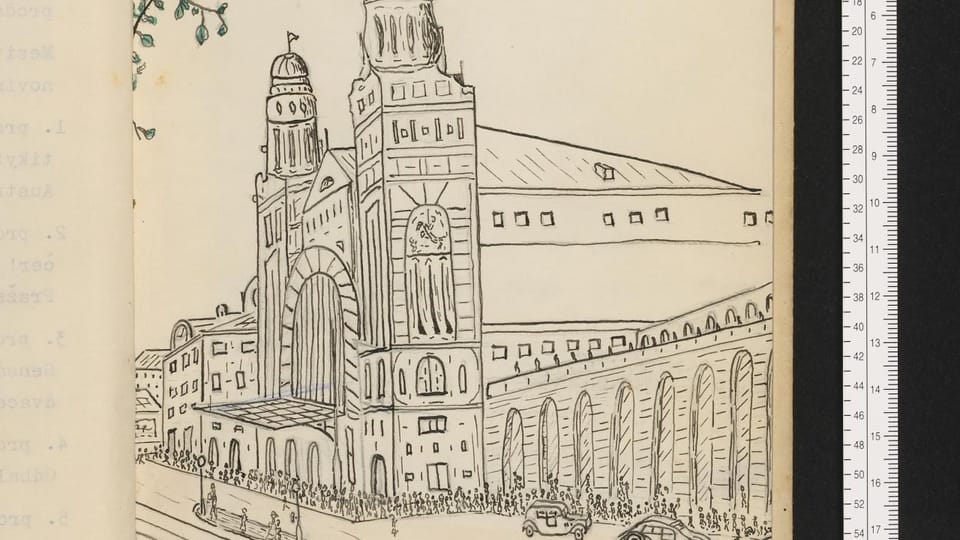 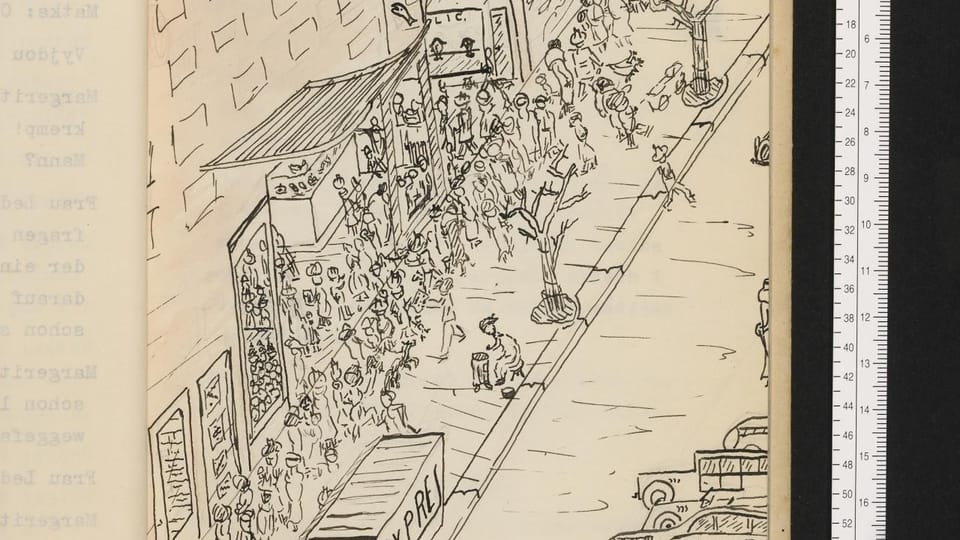 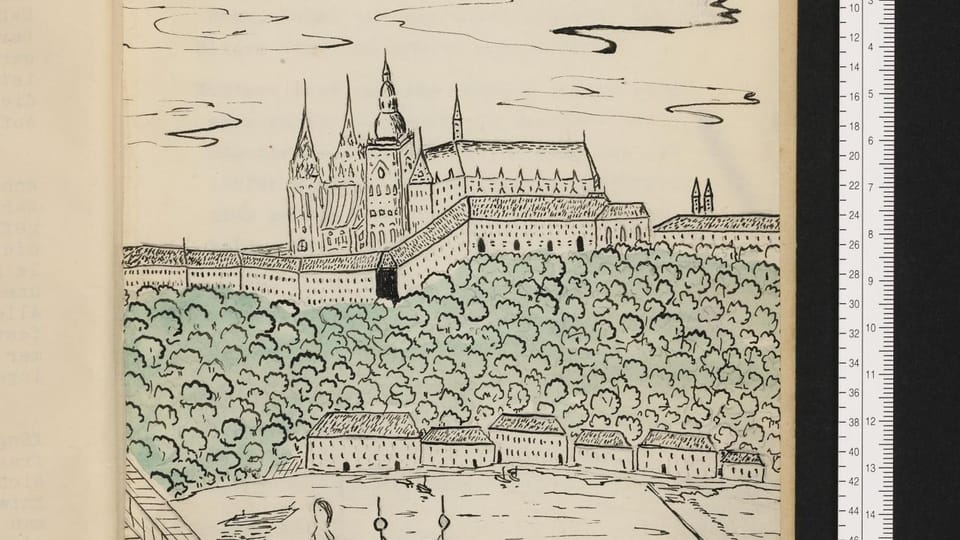 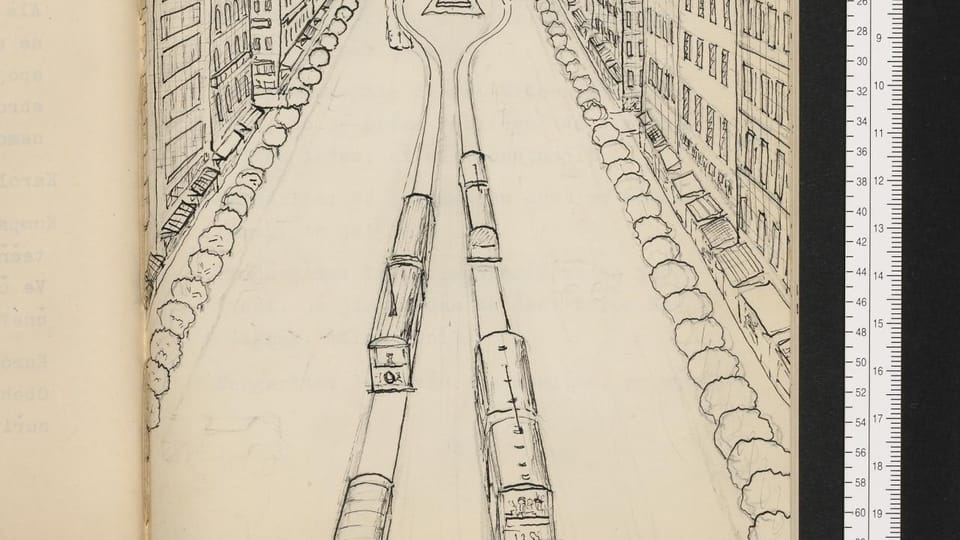 David Vaughan explains what happened next.

“He took these things back with him to Britain. By that time he had an English wife and had two children. The trauma in him was so strong that he never talked about his past with his family. He carefully looked after the things that he had preserved, he put them in a cupboard, but never talked about it.

“It was only decades later in the 1980s, after he had been hit with a stroke, that his son, Colin, decided to open the box and try to put together again the pieces of family history.”

It was this wealth of visual documents and the family’s tragic, but important story, that led Mr. Vaughan to pursue making something more.

“I made this radio series and realised that it was not enough. There is such a wealth of visual materials, the letters, the photographs, sketches, drawings and Rufolf’s architectural designs, that it would make for a very interesting exhibition.

“So I went looking for partners and found Post Bellum, the organisation which is interested in keeping alive the memory of witnesses to history, and they said yes.

“I approached the owner of the Winternitz Villa, because I knew that it had been designed by Adolf Loos, an indirect connection but one nevertheless. I asked if they would like the exhibit to be here. He was immediately enthusiastic, because it was his great-grandfather who had commissioned Loos to design this building. His great-grandfather also perished in the Holocaust and he was also in the process of piecing things together regarding his family’s past, so it meant a lot to him.

“It was a very lucky constellation of several things and the result is this exhibition.”

The items on display are accompanied by texts in three different languages - Czech, German and English. So are the catalogues of the exhibition.

The multi-lingual presentation is not only useful for potential international visitors, but is also necessary, because “No night so dark” will soon be moving to Germany, says Post Bellum’s International Coordinator Marie Janoušková.

“Now, we have specific plans to present the exhibition in Berlin, Friedrichshain, in February of 2021. However, we are also open to new possibilities.”

Those new possibilities could be the United Kingdom and the US, reveals David Vaughan.

“We are hoping to bring this exhibition to Britain and the United States next year, we are currently in negotiations.”

If the plan does work out, “No night so dark” will likely be displayed in the Czech Centre in London, he says.