An LT 35 tank – pride of the Czech arms industry in 1938 – comes home. A Czech chemistry textbook wins a gold medal at the Frankfurt Book Fair. An 18-months-old baby boy gets a place in the Czech Book of Records! Find out more in Magazine with Daniela Lazarova.

Photo: CTK
Czechs enjoy their excellent beer more with every passing year. The consumption of alcohol in the past 70 years has tripled, with beer, wine and plum brandy at the top of the list. But, there can be too much of a good thing. Close to 100 Czech towns have now issued bans on drinking in public places – such the main square, the local park and the vicinity of schools and hospitals. Consequently a pint of beer could cost you up to two thousand crowns and mayors say the fines are proving extremely effective. Over thirty more town halls are preparing to introduce similar bans. At first some hard drinkers thought to outsmart the authorities by pouring hard-drinks into soft-drink bottles, but officers have now been equipped with alcohol-detectors which indicate whether a bottle contains an alcoholic beverage or not.
Photo: CTK
Czech Radio’s morning broadcasts in south Bohemia have unexpectedly re-introduced a ten-minute callisthenics session for listeners. This rise-and-shine early morning slot was a staple in the communist era and was abolished after 1989. Now someone wading through the archives found the programme and the station decided to run it as an experiment. The response was instant – young listeners thought it was hilarious and considered it a joke, older people for whom the radio gym slot brought back nostalgic memories of their youth, promptly started exercising according to the directions given by the instructor. Czech Radio says it is amazed by how many people have contacted them to say thank you and intends to keep the ten minute slot in its morning show for as long as the interest lasts. “Our older listeners benefit from regular daily exercise – and if this will do the trick, then we are happy to comply,” the station’s editor in chief told the media. Just goes to show that old habits die hard, and while young people have their spinning and kick-box classes, the older generation is happy to go back to callisthenics.
Photo: CTK
The damage caused by a fire that ravaged the entire left wing of the art-deco Industrial Palace at Prague’s main exhibition grounds has been estimated at 1 billion crowns but things could have been a lot worse if the fire had broken out a month earlier when this particular wing housed an exhibition of precious stamps including the Blue Mauritius and the famous black one-penny-stamp, both part of the British royal stamp collection. The stamp exhibition was insured for one billion crowns but the Blue Mauritius itself is said to be priceless. When the fire broke out there was a stomatology exhibition underway and dentists drills will certainly be a lot easier to replace.

If you’d like to be able to whip up a few gourmet dishes for friends – then consider going to this year’s Gastrofest in the town of České Budějovice. The three day festival will present new products, technologies and trends in the field of gastronomy and in addition to presentations for professionals there will be a variety of fun events for the public such watching international chefs and barmen at work and sampling a variety of Czech and foreign dishes. There will also be two attempts to get into the Guinness Book of Records: gastronomy students will produce an outsize pancake and a gingerbread cake inspired by the architecture of České Budějovice. The cake should be 3 x 3 metres large, contain 1,640 eggs and weigh an incredible 300 kilograms. If you like the sound of that – then remember that the food festival takes place in České Budějovice from November 13-15th.

The LT 35 tank was the pride of the Czechoslovak arms industry – and that’s saying a lot since between the wars Czechoslovakia was one of Europe’s most industrialized countries and one of the world’s biggest arms producers. This light tank was first produced in 1935 and perfected three years later. At the time it was the most cutting-edge weapon in its category. In 1938 it formed the backbone of the Czech military. During the war the Nazis used it in their battles in Poland and France, after the war the Americans shipped it to the United States to study its technology. The tank could go as fast a 34 kilometres per hour, weighed 11 tons and included a riveted armour, a two-man turret, and a 37-mm cannon for which 72 rounds were stored on board. Although the Czechoslovak army had close to 300 of these tanks – they were all destroyed in combat or sold abroad. The Museum of Military History desperately wanted one in its military collection and repeatedly entered into negotiations with other European countries, but to no avail. Now one of these tanks has finally come home – courtesy of the US military. It arrived last Friday and will be permanently housed at the Lešany Museum of Military History where it will have pride of place as the museum’s most precious acquisition.

The main complaint levelled against the Czech education system is that it is based on drills and memorizing, another relic from the communist era – and maybe even the Austro-Hungarian Empire. However things are slowly changing. Two Czech professors – Pavel Doulík and Jiří Škoda - put their heads together to produce a chemistry textbook for eight-graders that is inventive and inspiring, and makes chemistry an exciting adventure. The book was a hit at this year’s Frankfurt Book Fair where it was awarded a gold medal. The co-authors, who are good friends, said their aim was to show kids how to apply their knowledge of chemistry in everyday life. 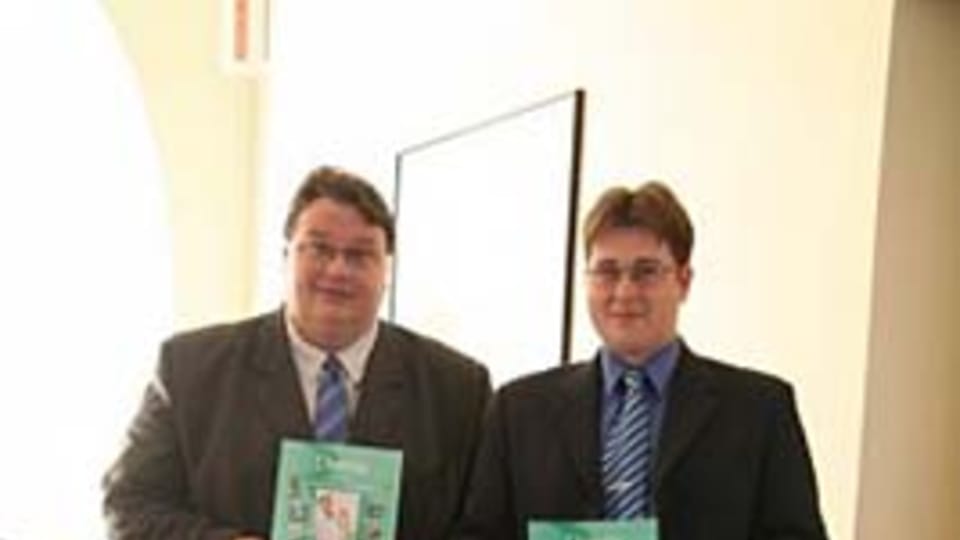 He is just 18-months-old and already has a place in the Czech Book of Records. Jakub Mulaj a baby boy from Plzen, West Bohemia, can distinguish 28 types of cars – whether you show them to him on telly, in magazines or on the road. Surprisingly, Jakub’s father is neither a mechanic nor a particular fan of cars. It is his grandfather who unwittingly sparked his interest in cars. When Jakub was seven-months-old his mom would hold him up at the window to wave goodbye to his granddad saying “there’s grandpa leaving in his Golf”. From then on Jakub started calling every car “golf”, and was patiently corrected by family and friends. No one really expected him to recognize a Mini Cooper, Hyundai or Lancia when he saw it again. But Jakub did, and now he’s better at recognizing various models than his dad!