A place called America in the Czech Republic has its own Statue of Liberty! Duchcov celebrates the 280th anniversary of the birth of the famous lover Giacomo Cassanova and the people of Becva gather to see a Dragons Boat Race! Find out more in Magazine with Danieal Lazarova.

Illustrative photo: Olga Mullen
Hundreds of people turned up to watch the dragon boats race on the river Becva near Prerov this week. The dragon race dates back some 2,000 years when a Chinese poet and philosopher committed suicide by jumping into the river Milo in protest against the high level of corruption in society at the time. His friends took out their boats to try and recover his dead body, using drummers to scare away any predatory fish in the river. The tradition of having a summer dragons race in the Czech Republic started some years ago and became incredibly popular. This year 30 teams from all over the Czech Republic took part. There are 21 people at the oars in each boat, and a drummer who sets the pace. Most of the contestants are canoeists, but increasingly amateurs are joining the race just for the fun of it.

Several hundred smokers marked non-smoking day by climbing the Czech Republic's highest mountain Snezka. The event was organized by the State Health Intsitute. For the most part they managed to climb the mountain without any trouble and enjoyed filling their lungs with fresh air, but few could resist lighting up whenever they took a break. Snezka is 1,602 metres high and despite the fact that Czechs in lower altitudes were trying to cool down in a 33 degrees C. heat wave, the mountain climbers waded through snow on the last leg of their climb. A full thirty percent of Czechs smoke and the annual consumption of cigarettes puts the country among the top five states in Europe.

Flying enthusiasts are having the time of their lives at Balloon Jam 2005 - an annual event attended by 30 teams from nine European countries. There are also special events for the public - balloon flights and fireworks in the evenings. The balloon show is on from Wednesday till Sunday and has attracted some 500 balloon flying enthusiasts from at home and abroad. The guest of honour at the event is Bob Kinsinger, the American who flew over the north Pole in a balloon.

Goulash sounds like a common dish - but cooks who took part in the international Goulash Festival here in the Czech Republic say that making a great goulash is an art. The best goulash cooks from the Czech Republic, Slovakia and Hungary competed out in the open cooking goulash in a kettle over a camp fire. They all had their secret ingredients -including what kind of firewood should be used. And, although there is a widespread view here that it is men who make the best goulash, the winner was a woman - Vladimira Vesela from Tabor. The jury said her goulash was out of this world. Asked where people could sample it, Vladimira said she only makes it for her family. The overall winner just happens to be a pastry cook!

Last weekend's heat wave broke century old records for the month of May with temperatures around 34 degrees Celsius in the shade and as high as 43 out in the sun. The heat storm that followed this tropical weather was the worst many people remember. For ten minutes hailstones the size of walnuts rained down on Prague as people scuttled for safety. Torrential rain quickly turned many streets into rivers, parks and streets were strewn with broken tree branches and water even filled an underground passageway of the Prague metro. Three people were injured by falling objects - one of them a window that was torn from its hinges. The storm brought down telephone networks - and the temperature by 12 degrees within minutes! Similar scenes of devastation were reported from other parts of the country. 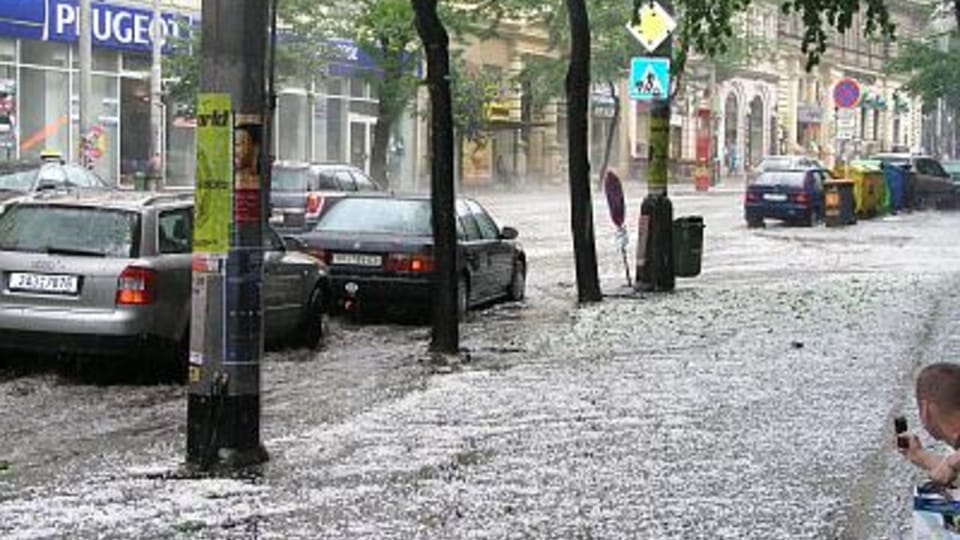 The town of Duchcov is celebrating the 280th anniversary of the birth of the famous lover Giacomo Casanova. Cassanova spent the last 13 years of his life at Duchcov Castle where he was employed as a librarian. Although his performance as a librarian is reported to have been second rate, his skills as a lover stood him in good stead and the town is proud of being associated with him. The Casanova celebrations now have an eleven year tradition.

This year the town's mayor, together with the Italian ambassador Giorgio Radicati unveiled a commemorative plaque to Casanova and planted a lovers oak tree on the castle grounds. The original oak tree -which was there in Casanova's life time - was destroyed by lightening 13 years ago. The mayor said that the old oak tree -surrounded by legends about who Casanova had met there -was badly missed and the locals had asked to have a new one planted for all the present and future lovers from near and far. Casanova was born in 1725 and the celebrations of his birth are tailored to those times - there are horse drawn carriages and a steam engine. The local theatre is staging a special performance about Casanova's life and loves. The three day celebrations culminate on Saturday.

You would not only find a place called America in the Czech Republic - you'd also find the famous statue of Liberty. The place to go is Vsetin where in 1996 one of the streets was officially named Amerika. The owner of the statue, who wishes to remain anonymous, told the press "when our street was named America I thought how can you have America without a statue of liberty? So I went to France and ordered one especially for our town." The copy was actually made in the Philipines and it is only 4.1 metres tall while the original is over 46 metres. Still the locals are proud of it. Ironically, their Statue of Liberty faces a valley called Moscow, something the locals love to point out to visitors and what they are particularly proud of is that they can actually light the torch of this statue any time they want.

The warm weather and occasional rain showers are good news for the thousands - if not millions of Czechs who enjoy the pleasures of mushroom picking in the country's forests. Mushroom picking is a national pastime and the minute that the first mushrooms appear you see people wondering around the forest with their eyes scanning the ground. Some say that there is no better way to relax and de-stress. And you come out with a basket full of delicious wild mushrooms for supper. Most Czechs can identify a vast variety of mushrooms from the age of nine or ten and the real pros at mushroom picking have their own secret locations for prize finds. A huge mushroom usually makes the prime time news and Mr. Josef Partac from Ceska Skalice boasted the first record find of the year this week. Nova TV showed him carrying his trophy: a field mushroom that weighed 5,5 kilos and measured 147 cm in circumference! Enough to feed all his friends at a mushroom bash!