The town of Duchcov, in North Bohemia, commemorates the great lover Giacommo Casanova. A Czech model wins the Miss Euro title and a dissatisfied client drops piles of manure all over the premises of a Czech insurance company. Find out more in Magazine with Daniela Lazarova

He’s been dead for over two centuries, but not forgotten. Every year in the first week of June the town of Duchcov, in North Bohemia, organizes an event to commemorate the great lover Giacommo Casanova on the anniversary of his death. It’s a popular summer event celebrating romance but that’s not all there is to it. In many ways Duchcov lives off Casanova to this day – its single claim to fame being the fact that at the close of his life Casanova worked at the Duchcov chateau as its chief librarian. This is where he wrote his memoirs and where he died 210 years ago. The town’s sightseeing route includes his favourite haunts, including a tree under which he is said to have seduced dozens of women. There are seasonal exhibitions in the Gallery Giacommo in the chateau’s main courtyard, Casanova festivities, and the Rose from Casanova troubadours’ singing competition. This year visitors were able to admire an exhibition of Casanova on old postcards and attend the world premiere of a new play by the local Casanova Theatre ensemble. And of course every year there are lots of pretty girls taking part in the Casanova festivities – what more could Giaccommo ask for – except to be allowed to take part. A survey focusing on what Czechs like to snack and the kind of food they take on outdoor trips has revealed that nothing much has changed in that department. Czechs are still primarily meat eaters, although they now throw in an apple or pear into their lunch boxes as well. Czechs out on an outing are most likely to unpack salami-and cheese sandwiches or else a “schnitzel” wedged between two slices of bread and pickled gherkins. A schnitzel is a slice of pork or chicken breast roasted in breadcrumbs and is considered a favourite snack – as substantial as a proper meal and something that you can easily consume on-the-go. No wonder so many Czechs breathed a sigh of relief this week when Croatia announced it was withdrawing a ban on meat and dairy imports by tourists. Most Czechs heading for the country’s seaside resorts have their car boot packed with leg of ham and other favorite foods.

The Socrates Education Institute is in an embarrassing position. It recently published hundreds of brochures advocating its services, only to find that the studious-looking brunette on the cover was actually a porn-actress. Worse still, the cover picture in which she is shown reading a textbook, was taken straight out of a lesbian porn movie. Moments later the studious schoolgirl was approached by another and the pair of them devoted themselves to anything but studying. The head of the Socrates Institute Pavel Petr says he is mortified and is considering legal action against the graphic studio responsible in order to protect the institute’s reputation. A lot of people have signed up for the Socrates classes and, as Mr. Petr, points out – under the circumstances there’s no knowing what they might expect.

The Czech Republic is off to a good start at the Euro 2008 football tournament. This week Czech model Dominika Hužvárova beat all 15 rivals for the "Miss Euro" title and said she hoped that the Czech team would maintain the high standard she’d set throughout the tournament. The 22-year old blond model won the beauty contest ahead of Filiz Heilmann of Turkey and Mariola Shabanaj of Greece. "I am proud to represent Euro 2008. Football is an exciting sport," said Hužvarova told the media. She said she had as a soft spot for her country's footballers, not only for their football skills but mainly for their good looks.

Kids in the town of Brandýs nad Labem were asked how they wanted to celebrate international children’s day last weekend and the verdict was unanimous: they said they wanted a huge cream-cake fight. The weather was perfect and local chefs produced hundreds of cream cakes for the occasion. The free for all took place on a green on the outskirts of town with fire-fighters ready to give them a wash-down once it was all over. 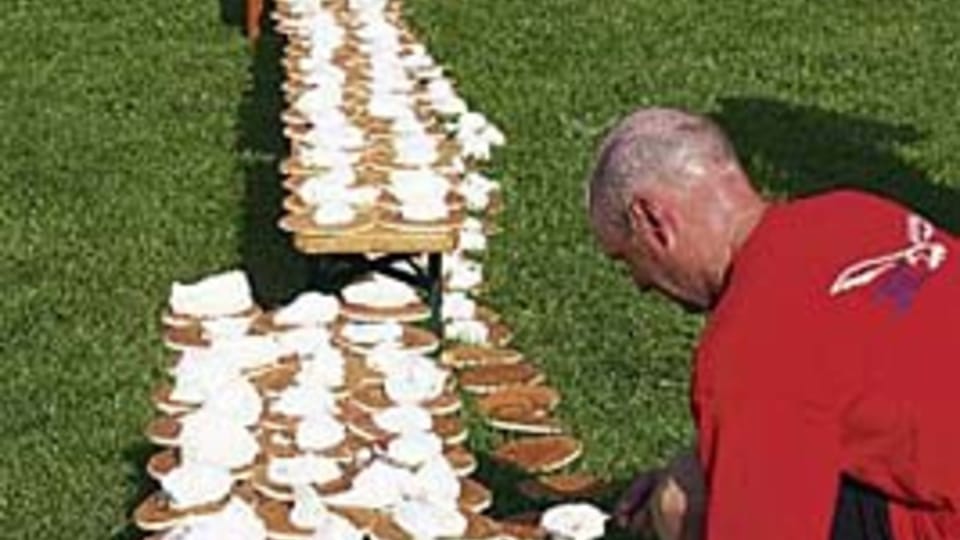 Everyone gets the hiccups occasionally and there is plenty of advice going around as to what will stop you hiccupping – having a drink of water, eating a cube of sugar, taking a deep breath and holding it or lifting your left arm and right leg simultaneously. Of course, none of that folklore really works but a Czech physiotherapist says he’s finally got the answer. The hiccups apparently are brought on by a cramp in your diaphragm and the trick is, he says, to do twenty or so push-ups without taking a rest. This will force your stomach muscles to move rhythmically and get rid of the cramps. Well, next time you get the hiccups you can put that to the test.

The country’s largest insurer Česka Pojištovna was in for a shock this week when a dissatisfied client took extreme measures to protest against what he though was unfair treatment from the institution. Mr. Miroslav Barták got out of his car at midday on Friday wearing nothing but boxer shorts and was covered from head to food in dried mud. Swinging a pail of manure in his hand he entered one of the company’s outlets and proceeded to drop large portions of stinky manure all over the place. The security guards were so shocked they failed to prevent his entry into the building. As for Mr. Barták –he did what he’s come to do – and left the place so well fertilized that the outlet had to be closed down for the rest of the day and an army of cleaners was called in to take over. Evil tongues say that inspite of their efforts and a car-load of detergents you can still detect a slight smell of manure in the air.