Czech politicians to resolve their differences with a bow and arrow! A respected Czech diplomat will make his film debut later this summer and - the modest bank robber who would only accept a few bank-rolls from the teller. Find out more in Magazine with Daniela Lazarova.

The two main rivals on the Czech political scene - the outgoing Social Democrat Prime Minister Jiri Paroubek and the winner of the June elections Civic Democrat leader Mirek Topolanek may try to resolve the drawn out stalemate on the Czech political scene with a bow and arrow. The idea came from Mr. Topolanek himself who at one point noted how much easier it would be if he and his rival could resolve the deadlock by some simple means such as a duel or archery contest. The organizer of archery competitions for the handicapped happened to hear the interview and promptly made an offer to host such an event at their convenience. Both politicians have accepted and they are now looking for a suitable date for the event.

A Czech man drove an armoured personnel carrier through a historic town centre just to buy his kids ice-cream. Miroslav Tucek - a 34 year old military history buff - now faces a heavy fine for driving the 12-ton military vehicle from his own collection through the streets of Hradec Kralove. The police patrolling the town couldn't believe their eyes when they saw the personnel carrier parked outside a sweetshop, a police spokeswoman reported. Tucek explained that his own car had broken down and since he'd promised the kids ice-cream -and it was a long walk into town -he decided to put his personnel carrier to good use. It's probably the most expensive ice cream his kids will ever have.

The former Czech Euro-commissioner Pavel Telicka will be making his film debut later this summer. Mr. Telicka will be playing the part of a school inspector in a new Czech film called High School. This unusual bit of casting is the work of Czech actress Eva Holubova, who insists that with his looks Mr. Telicka can't put a foot wrong. The former Euro commissioner said he was amused to get the offer and decided to go for it "just for the laugh". "I have no ambition to be in the film business, this is just a bit of summer fun" the respected Czech diplomat said.

A paper model of the Prague Castle compound is the latest addition to the Pelhrimov Museum of Records and Curiosities. The model is 140 x 60 cm - in other words 450 times smaller than the real thing, but in every other way it is a perfect copy - down to the intricate designs on the cathedral's windows. The number of windows, arcades and chimneys matches reality, as do the colours. The paper model of Prague Castle is made up of 3,000 components and it took two Czech enthusiasts Pavel Bestr and Robert Navratil 500 hours of hard work to make.

Of course that is nothing compared to Antonin Langweil's famous paper model of 19th century Prague which is permanently exhibited at the Prague Museum. The model was made by lithographer Antonin Langweil over a period of ten years - between 1826 and 1837. What started out as a hobby became his life's dream and he devotes all of his spare time and most of his family's resources to making it come true. He worked alone, painstakingly recording every detail of the building or street he was working on - walking around the capital early in the morning and late in the evening in his spare time to make sketches that he would use later. The details he included are mind-boggling - such as a broken window or a ladder left leaning against a wall. The houses are numbered, there are lanterns, front gardens and sheds - everything painted in its authentic colour - more than 2,000 buildings - including the Prague Castle compound - on a space of two by two metres. Today the model is regarded as a treasure - but the man who made it died in sickness and poverty and the model was eventually sold - sometime after his death - for a price that barely covered the cost of making it.

Although Czechs are not making an effort to lead a healthier life - they are living longer. Improved health care is one of the reasons, according to a report in this week's Pravo. Today the life expectancy for men in 72; for women its 78, which is the second best in the post communist world after Slovenia. However it still leaves room for improvement if you look west. And confirming that things are looking up - Czech doctors this week operated on their oldest patient ever - giving 100 year old Ludmila Koukalikova a pacemaker. "I performed for President Masaryk - Czechoslovakia's first president - and I aim to be around for a while yet," the old lady said. Although it may seem that the lady has set a record she is not the oldest person in the Czech Republic with a pace-maker. That record goes to a lady who is going on 107.

Two bizarre bank robberies took place in Prague this week. The first happened in the centre of Prague where a 62 year old pensioner nearly got away with half a million crowns. He threatened to blow up the building and in a panic the clerk started shoving banknotes through the glass partition. When the robber's bag was full he turned to run but dropped the bag and notes scattered in all directions. Before he'd managed to collect them all- the police had arrived to arrest him. In a different part of Prague, another man walked into a bar and asked about a job vacancy - when he was turned down he asked the staff to direct him to the nearest bank - which happened to be just around the corner. He walked in and when the teller saw his gun he also started shoving banknotes in his direction. To his great surprise, the robber only took part of the money, shoved the rest back, thanked him and left. The modest robber is still on the run with the money that was obviously meant to tide him over before he got a job. Both men face up to ten years in jail. 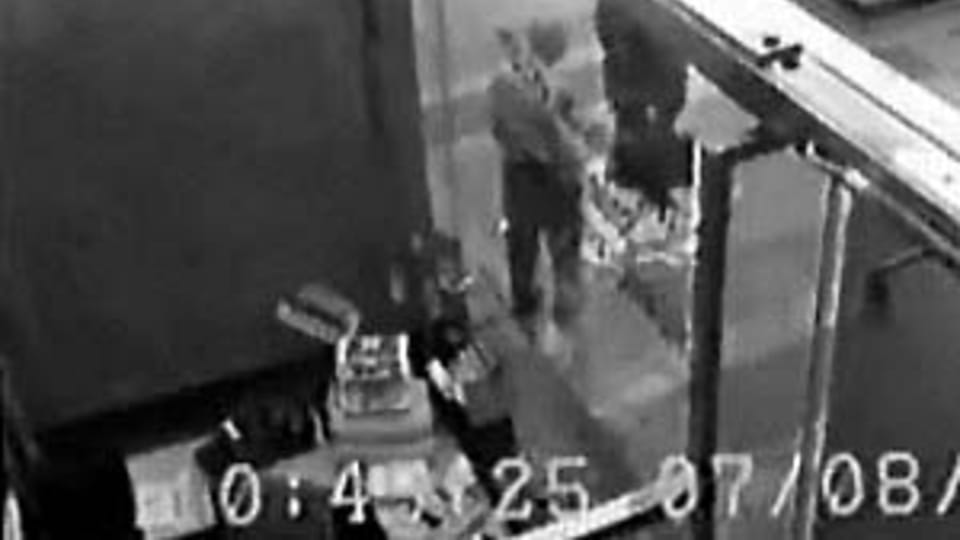