Patrik Ouředník’s 2001 book Europeana: A Brief History of the Twentieth Century is one of the shortest and most fast paced histories of humanity's bloodiest century. A work of experimental prose, details about the period are knitted together in neverending sentences and paragraphs, more or less equalised in importance through the use of a single recurring conjunction. The result is a book that provides an alternate, almost absurd view on humanity and its efforts over the past century.

“Psychiatrists said that in many people the First World War provoked traumas that had been previously hidden in the unconscious, and in the 1920s and 1930s the people started to be neurotic because they were not adapted to their inner or outer state, and in Europe in the 1960s, 25% of women and 15% of men were neurotic, and journalists called it the disease of the century. And in the 1970s the number of people suffering from depression also started to rise, and at the end of the century every fifth citizen of Europe was depressed. Sociologists said that neurosis and depression mirrored the cultural transformation of Western society in the twentieth century. And neurosis mirrored a society dominated by discipline and hierarchy and social taboos and that it was a pathological expression of a sense of guilt.”

Patrik Ouředník, photo: Argo, CC BY-SA 3.0
The moment you pick up Patrik Ouředník’s book Europeana you are assaulted with an arsenal of information flung at you with virtually no interruption until you reach the end of the rollercoaster ride through the 20th century on page 120, finding out that nothing has fundamentally changed in humanity, which is still trying to find a better future while being riddled with old rivalries.

Facts, often unrelated in importance or context, are all knitted together by a seemingly naive, detached narrator in long paragraphs and sentences connected simply with the conjunction “and”. It may seem confusing when described, but it works. Thoroughly readable, it is easy to digest in one sitting. A quick history to the 20th century for some, a seemingly simple book that hides a deeper point for others.

Ouředník himself explained what led him to writing this book in such a way when interviewed by Czech Radio in 2018.

Europeana has since become the best selling Czech post-1989 novel abroad. It has been translated into at least 10 languages. Scientific facts, often in the form of idiosyncratic observations, are laced into paragraphs depicting both descriptions of the great horrors of the age and its greatest accomplishments. The book has been summarized as highlighting not just the absurdity of the 20th century, but of even attempting to narrate its history.

“And if someone who looked strikingly jewish turned up amongst the prisoners, the Nazis cut off his head and stuffed it and sent it to German schools so that young people could recognise a Jew at first sight. Jews could be recognised by the fact that they had a hooked nose and villanous eyes and an evasive gaze and long bony fingers and they were often weak and sickly because nature had thrown them from her bosom. The twentieth century saw great advances in medicine and doctors invented penicillin and compulsory vaccination and blood transfusions and contraception and erection stimulants and women gave birth in maternity hospitals and received maternity leaves and people no longer died at home but in hospital, surrounded by the best that modern medical care could provide.”

The author of its English translation, Gerald Turner, likened its prose to that of reading a twitter feed.

A Brief History of the Twentieth Century by Patrik Ouředník, photo: Dalkey Archive Press
“It is that sense of scrolling down. When you see the pages within Europeana your eyes are scrolling down the page. Of course we have these little marginalia which are nonsensical, or which do not add anything to the text at all. As with social media now or with websites, where you have links and so on. I think it has very much to do with the explosion of mass media.”

Europeana certainly resembles modern day social media scrolling in its overflow of details, detached from each other, yet also strangely connected thanks to the algorithms through which it is governed, or the network of followings that its user has established.

Ouředník of course wrote the book before social media had become a major factor in international information and communication. However, there is another aspect that Mr Turner, when asked if there is something typically Czech in the book, notices about the prose.

“Having lived here ten years in the 1970s what strikes me is that it emerges perhaps from this whelter of nonsense that formed the media here in those days. It was full of statistics about fulfillment of five year plans and so on. I wonder if that was not in some way a source for his inspiration, just these mind-deadening statements of fact that in those days normally bore absolutely no relation to reality.”

The Czech lands experienced all three of the great ideologies that shaped the 20th century and the book playfully switches through their interpretations of the world as events and resulting consequences.

Petr Fischer, photo: archive of Cyech Radio
It is this playfulness in the retrospective portrayal of the absurdities of puritan ideology which Petr Fisher, one of the few journalists to have interviewed the normally reluctant author, sees as the most memorable characteristic book.

“We no longer have any great ideological narratives that would be able to interpret the world in an all encompassing grand narrative. Acknowledgement of this fact is a very characteristic aspect of the book. You will encounter it while reading.

“Different ideologies collide, whether in sociology, in political science, or the politics of everyday life. You notice that transformation. All those theories become false. They can no longer guide us in our interpretation of history.

“This is a big topic for Patrik Ouředník, but it doesn't mean that we should completely accept being lost, because the critical mind is not lost. I think that is the main point of the whole book. We no longer have grand ideologies, great theories through which we can definitively explain the world in order to subsequently inhabit such a version in perpetuity. At the same time, it does not mean that we need to get rid of critical thinking.”

It is not only in bookstores that Europeana has had success. Despite its lack of dialogue, the book has been adapted by both Czech and international dramatists. One of those successful adaptations was created by director Jan Mikulášek and dramatist Dora Viceníková from the Na Zabradli theatre in Prague. 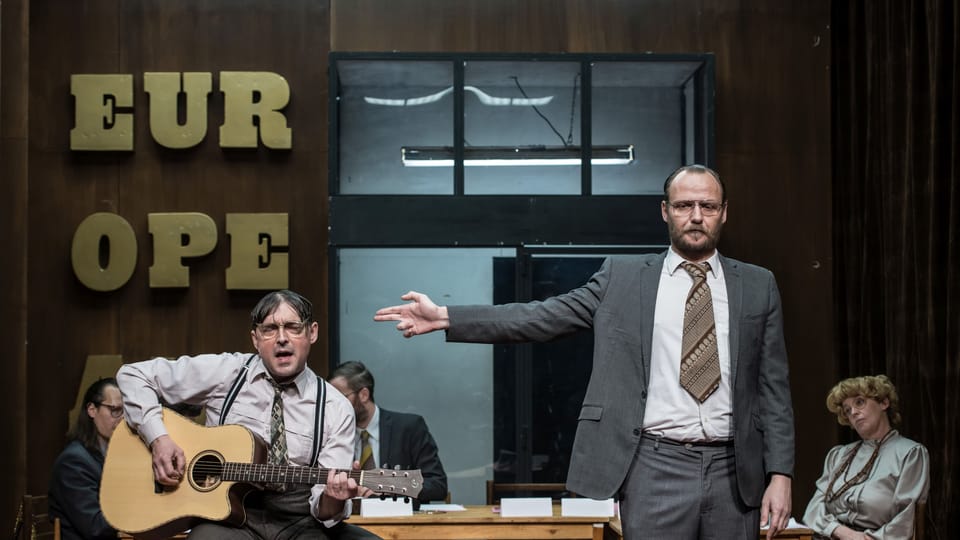 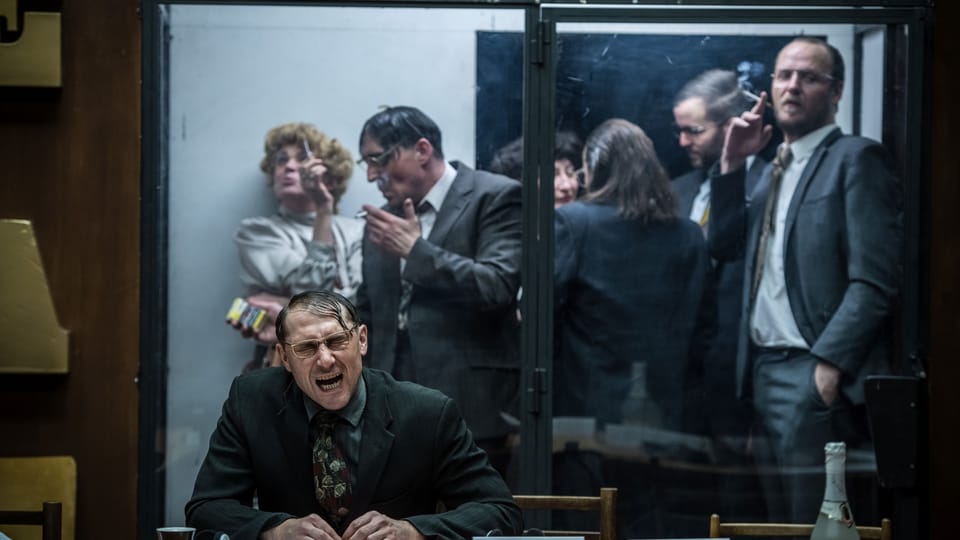 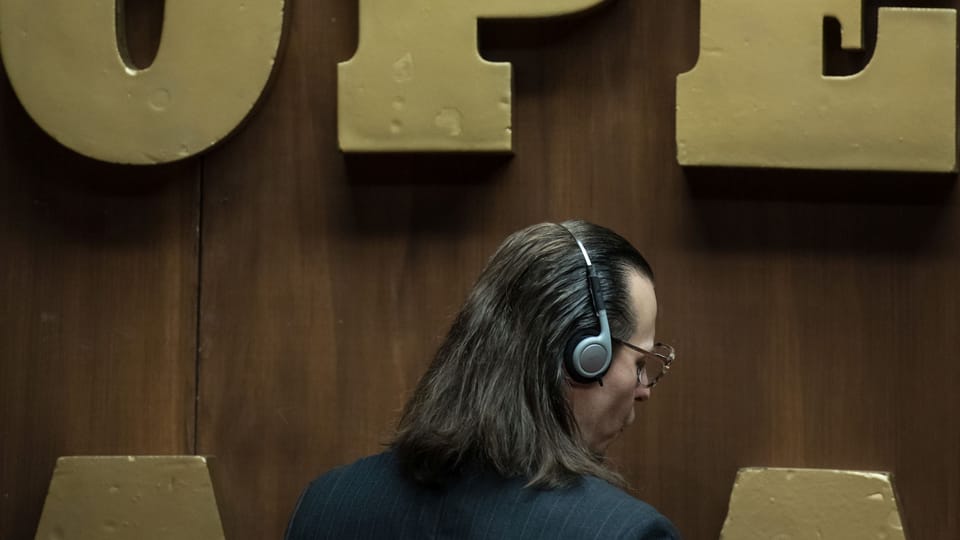 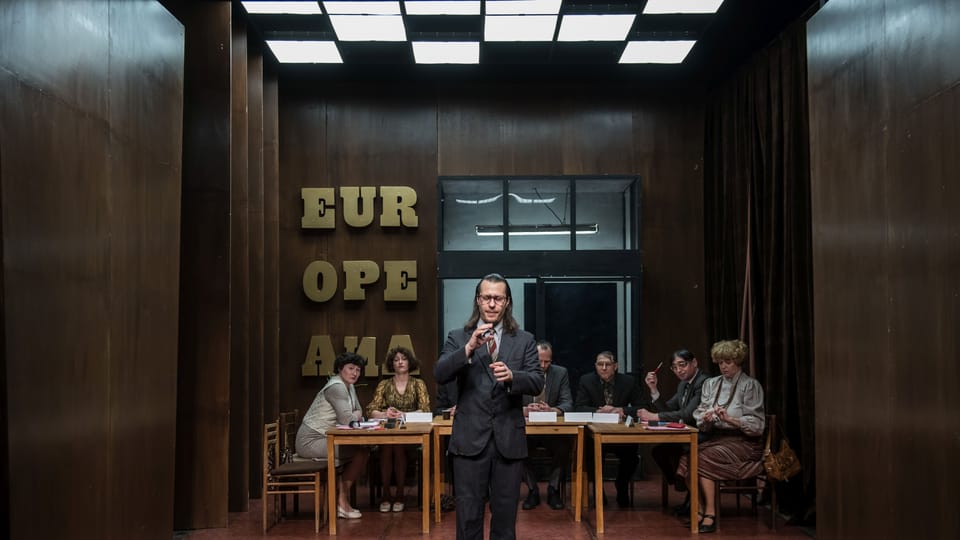 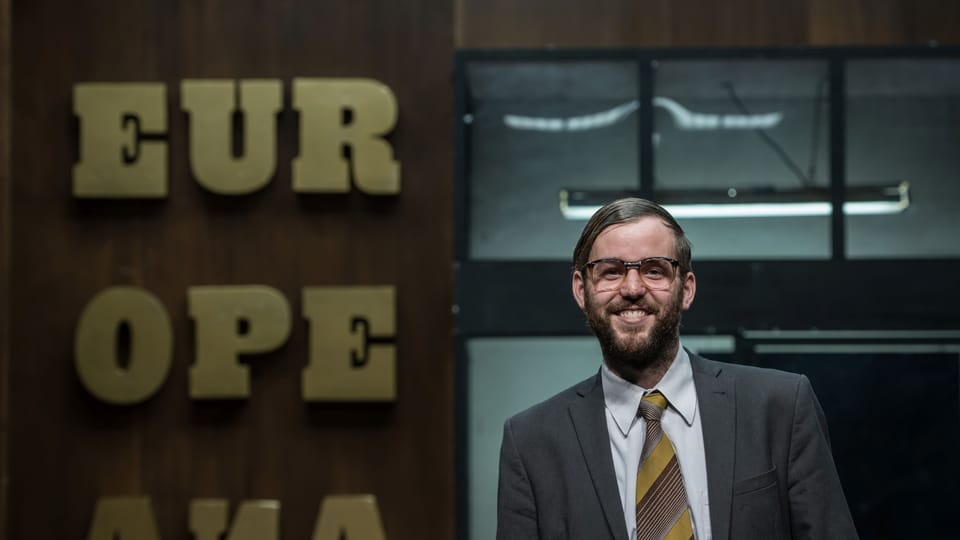 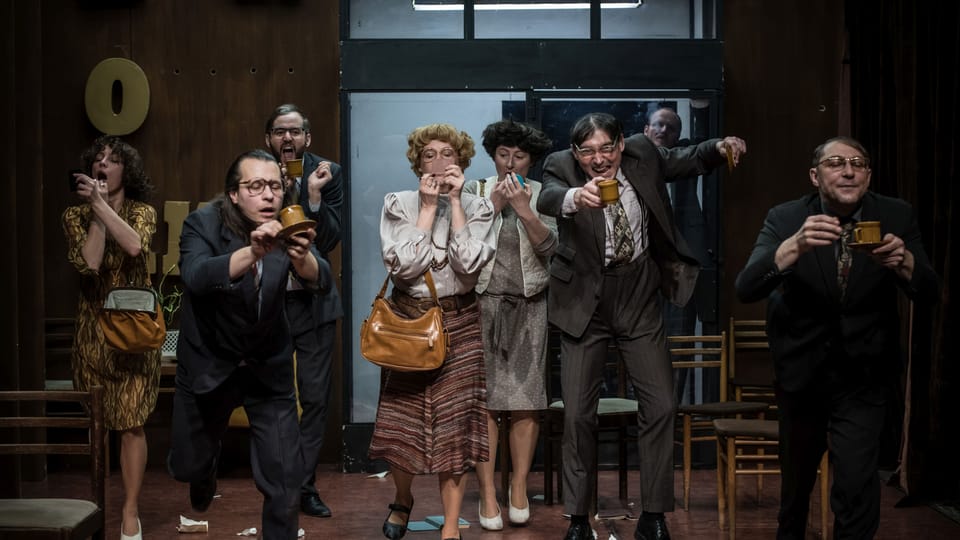 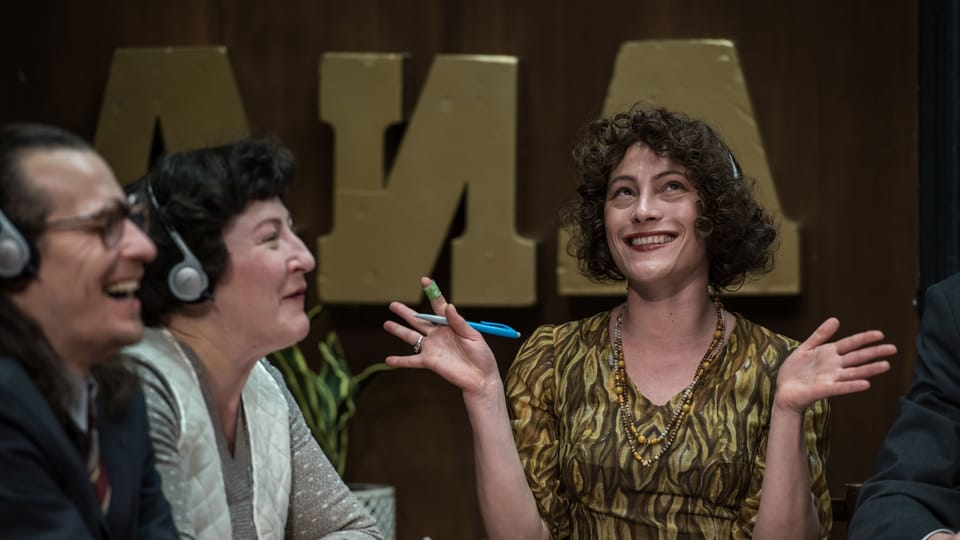 “The main impulse was that it was one of my favourite books. Another reason for the decision lay in the fact that it contains such imagery and the themes switch so sharply in the different cuts that I found it as very interesting material for an ironic look back at history, which could also find its potential in theatre.

Dora Viceníková, photo: Tomáš Vodňanský, ČRo
“That said, we did come across a number of difficulties. Particularly, because the text in the book already has a clearly defined opinion. It already has a defined view on the subject that it covers. We thought that would be tricky for theatre at first, because you cannot provide comment on something that is already a commentary by itself.

“However, on the basis of this scepticism, we ended up going in the direction of an illustrative form, where first the text, which is very fixed and powerful, is read and subsequently we made our own theatrical commentary based around powerful imagery. Summed up, we did not alter the text, we left it there. Rather we created a sort of parallel depiction on the stage.”

The play was first performed in 2013 and received wide critical acclaim. Its success has led to regular repeats with the latest performance scheduled for this September. But it is not just in the Czech Republic that Ms Viceníková and her team have had success.

“It is our most popular production abroad, possibly also due to its cosmopolitan appeal. We have traveled through the world with this play, for example we performed it in Bogota non-stop for a week. It was shown in Germany, Poland, or Serbia.

“What is interesting about this play is that, because it depicts world history with all nations included, different parts of it get different reactions depending on the country where it is performed. For example, when the book’s bombing of Sarajevo comes into the performance, in Serbia it is met with dead silence, almost disapproval. It is interesting how each nation finds a problematic moment in a part of the play, a painful topic that it is unwilling to approach with humour.”

Patrik Ouředník is a Czech writer, poet and dramatist. Born in Prague in 1957, he now lives in France where he writes in both French and Czech.