100 years of the Republic - Dining at Prague Castle

Dining is one of the most important manifestations of material culture. At state dinners the quality of the porcelain and glass used represents a given state. On the occasion of the 100th anniversary of the founding of Czechoslovakia, we have prepared a photo gallery, documenting the porcelain and glass dining sets used by Czechoslovak and later Czech presidents. They did not necessarily change with every administration, changes in the porcelain, glass and silverware used were usually related to a change of state symbols. So how was the Czech Republic – a country with a long tradition in the production of glass and porcelain - represented at the highest tables in the land? 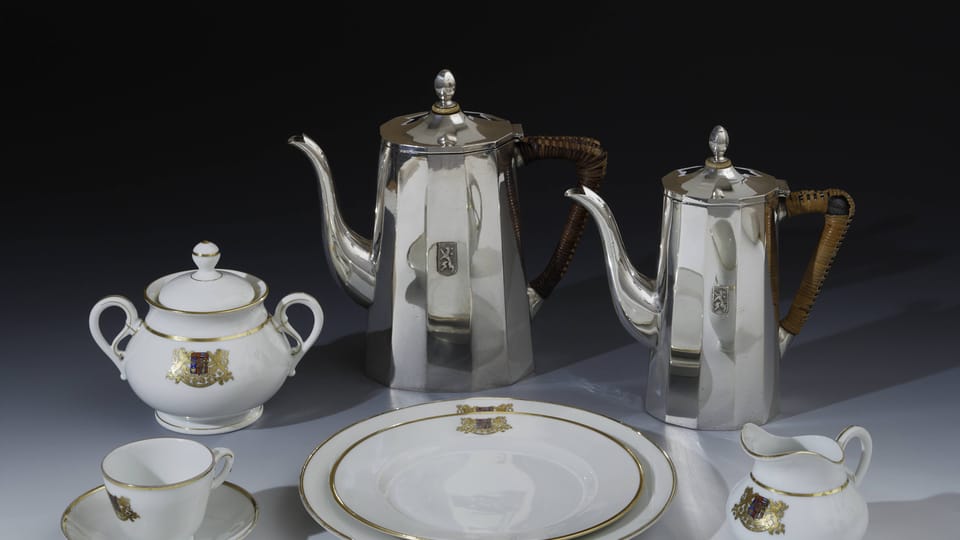 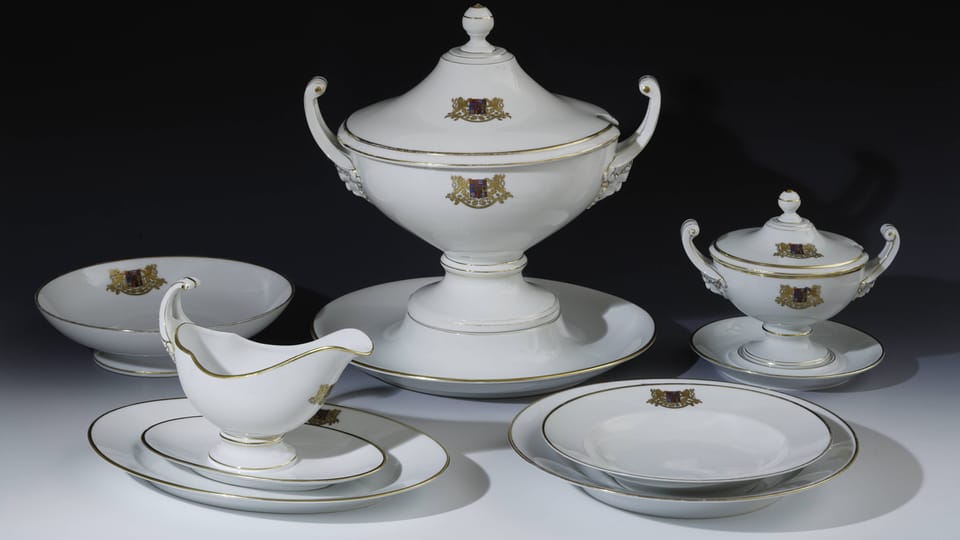 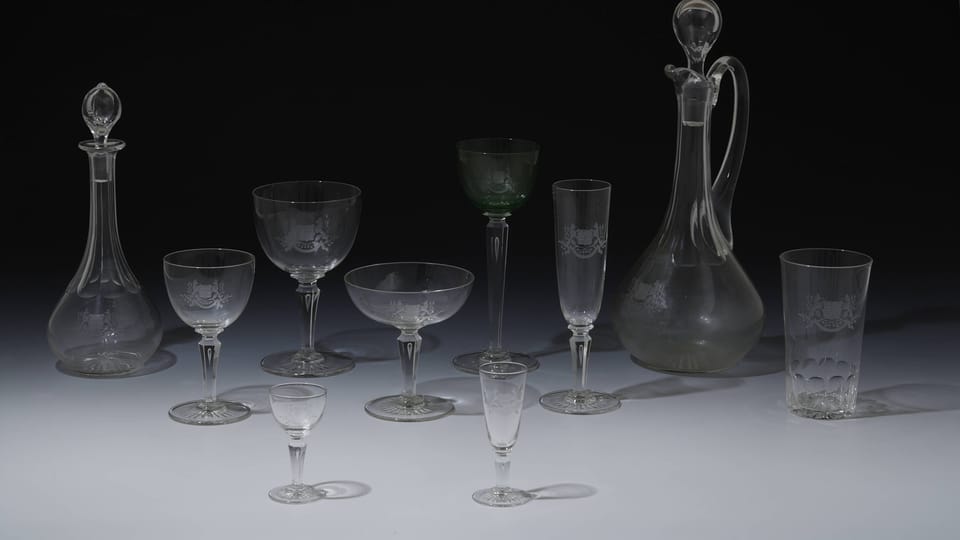 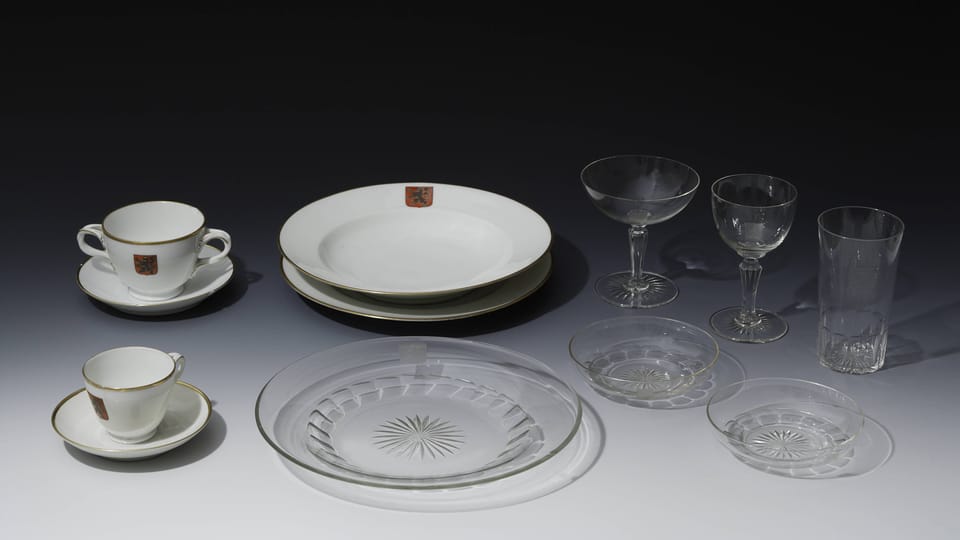 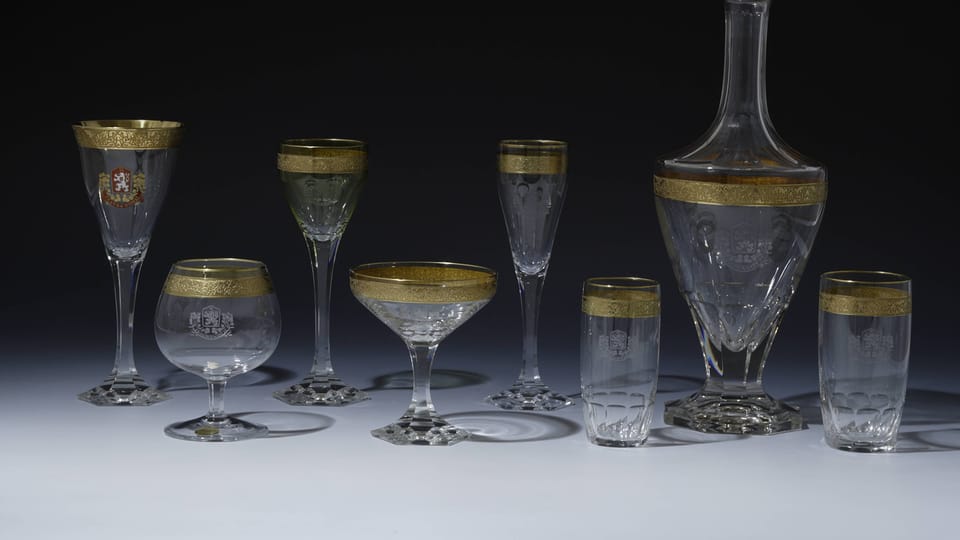 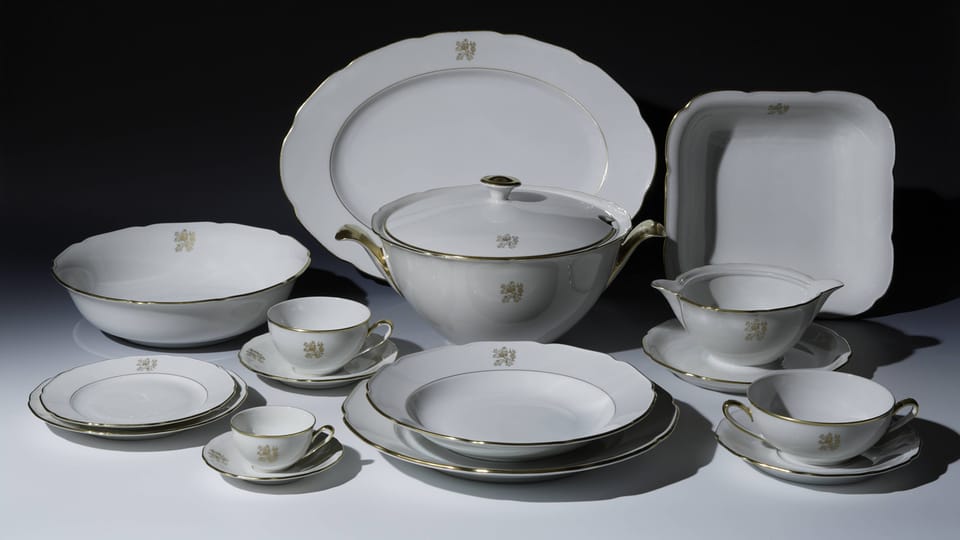 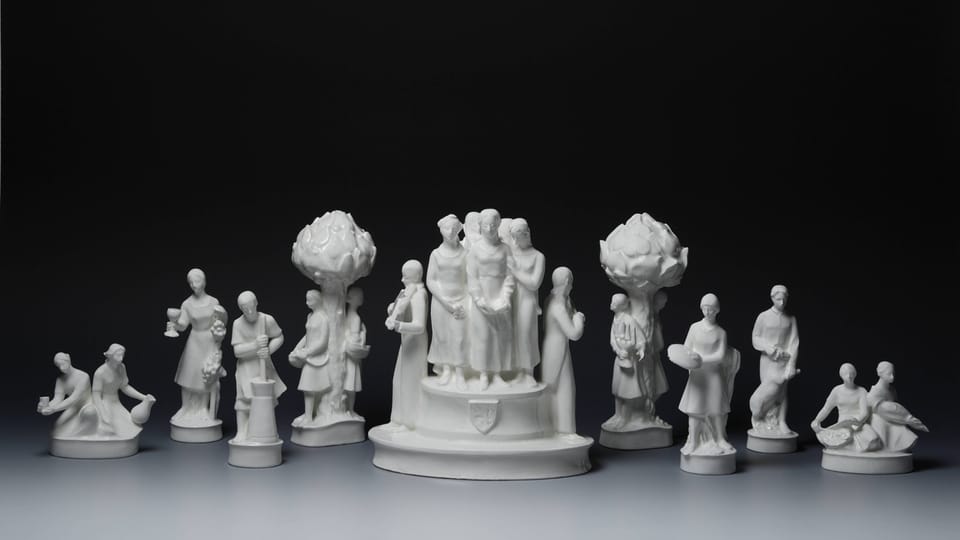 Czechoslovakia’s first president T.G.Masaryk and his office had to start from scratch and set a high standard. The dining set for Prague Castle was made by the best porcelain producer in the country, Pirkenhammer in Březová, and was decorated prominently with the country’s national emblem. The sauce boat from this set is still considered one of the most beautiful items in Czech porcelain manufacture. The dining set was complemented by robust Moser glasses with the state emblem engraved in crystal.

The dining set used at the time was complemented by Moser glass bearing a small state emblem, photo: © Prague Castle collection, Jan Gloc
The dining set with a small state emblem designed by Jaroslav Kursa in 1919 had a strange fate. The emblem, showing only the traditional Czech lion, sparked strong criticism in Slovakia and in order to prevent antagonism the set was almost never used. In 1939, however, the Czech lion became the emblem of the Protectorate of Bohemia and Moravia and the set was brought out to be used at Prague Castle in years 1939-1945.

The dining set used at the time was complemented by Moser glass bearing a small state emblem.

During the term of the second Czechoslovak President Edvard Beneš, a porcelain dining set was ordered at the exclusive porcelain manufacture in Nové Roli. It delivered an impressive dining set with a lobed border decorated with a golden lion. The set was used with Moser glass.

A change of the state emblem, enacted in 1960, led, among other things, to new orders for dining sets for the needs of the Office of the President of the Republic. In 1966 the Karlovy Vary Bohemia porcelain subsidiary in Nove Roli, favoured by Prague Castle, delivered a modern porcelain set named Claudia. The service was complemented by elegant and simple cut glass by Moser.

In 1972, the Office of the President ordered a new dining set traditionally from Bohemia porcelain in Nová Role. The porcelain with a decorative edge was a departure from the modern, sober shapes of the previous era. On the tables of Prague Castle it was complemented by Moser glass.

The dining set, which is still in use at Prague Castle, was ordered in 1998. Designed by academic sculptor Jiří Vlaštovička it was produced at the Karlovy Vary Bohemia porcelain subsidiary in Nová Role, which later became part of Thun. The glassware was traditionally supplied by Moser. 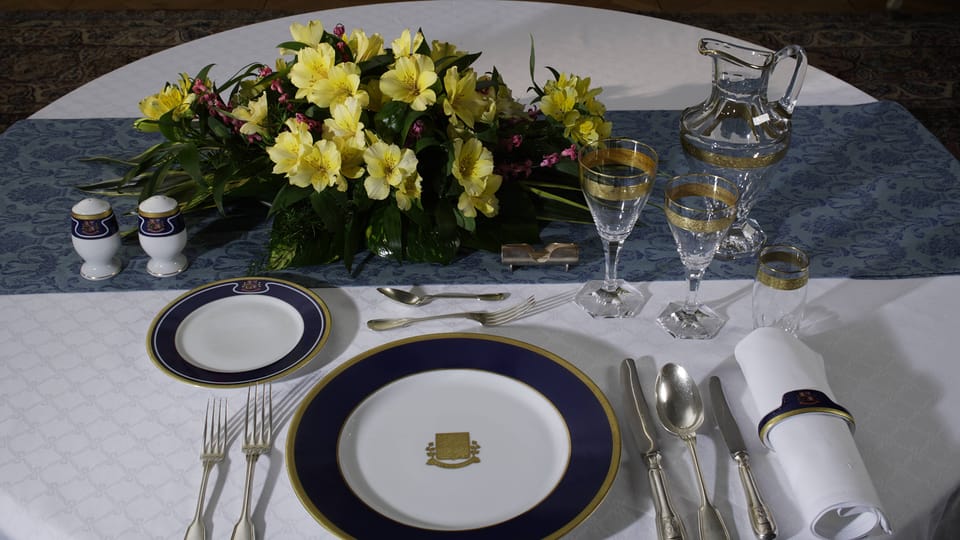 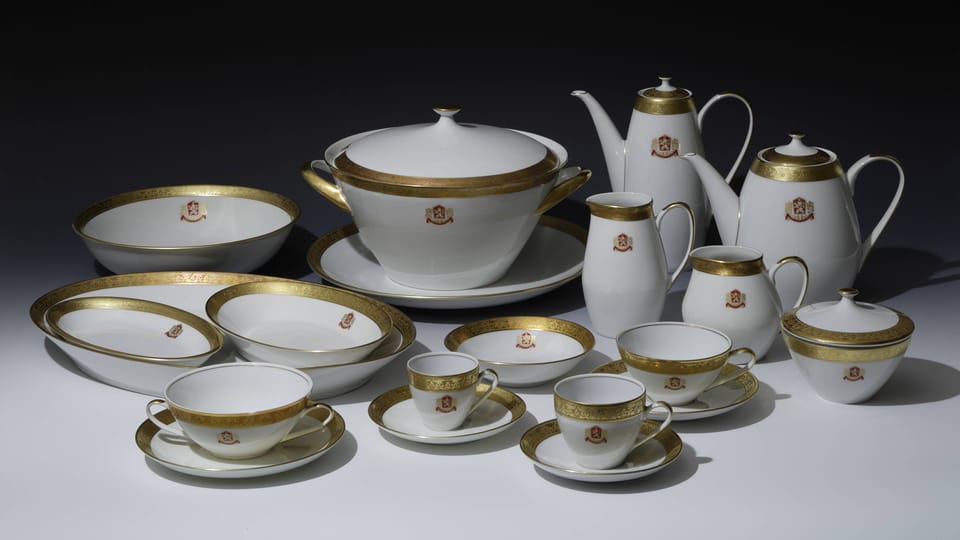 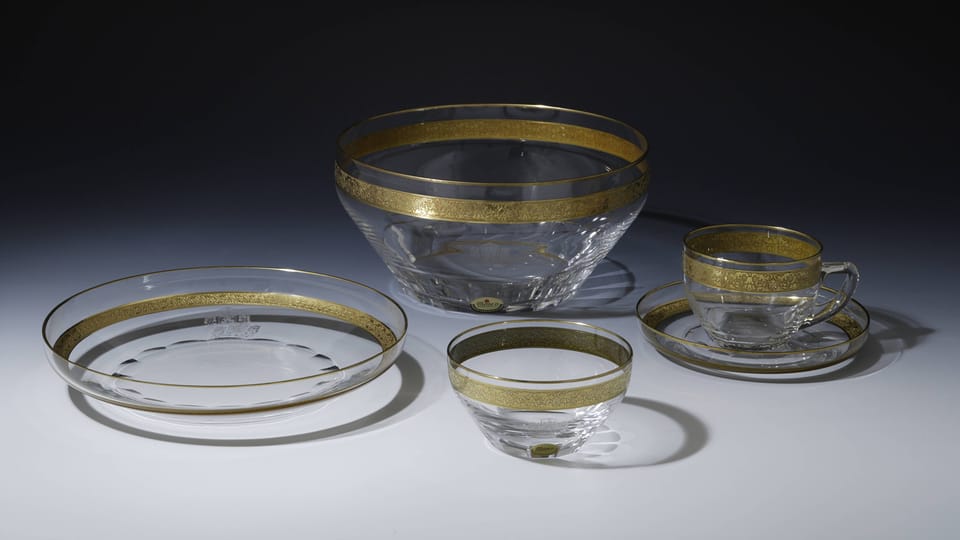 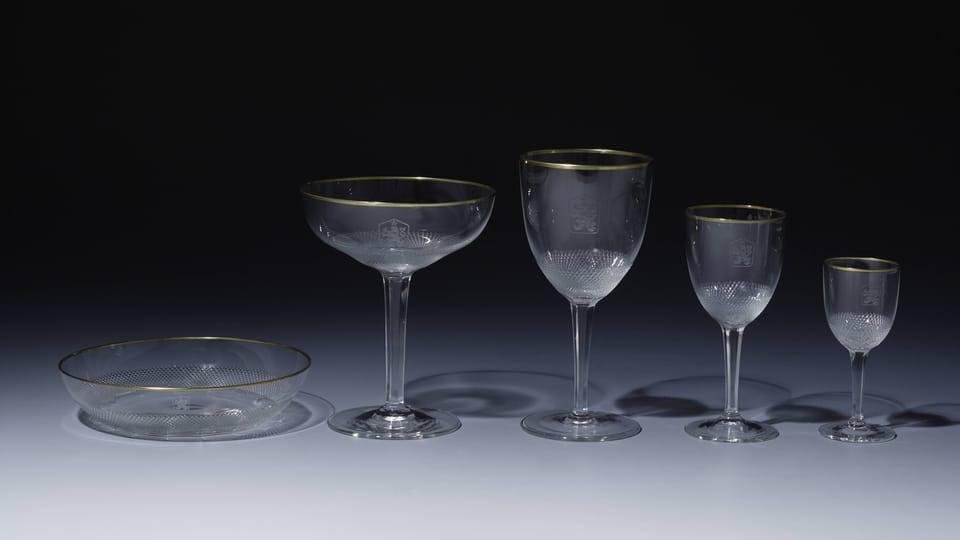 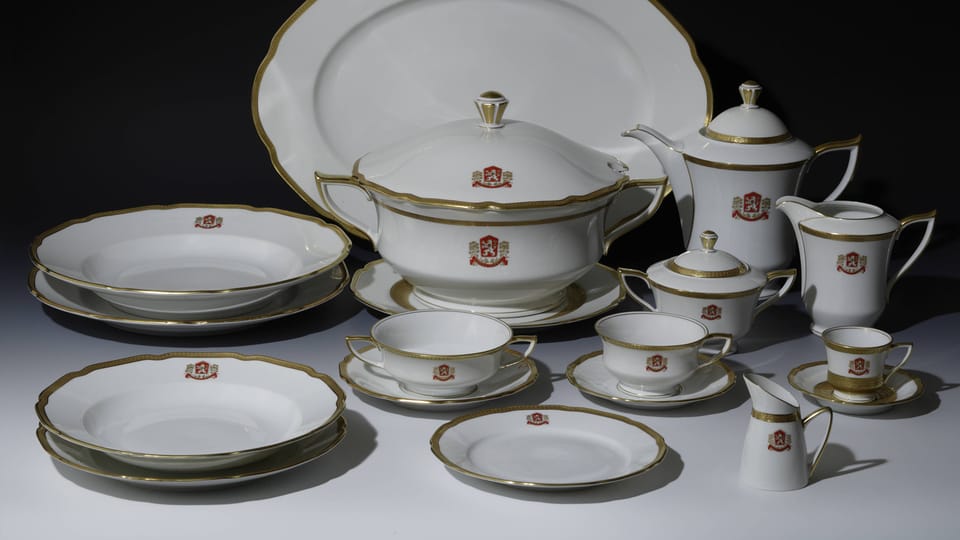 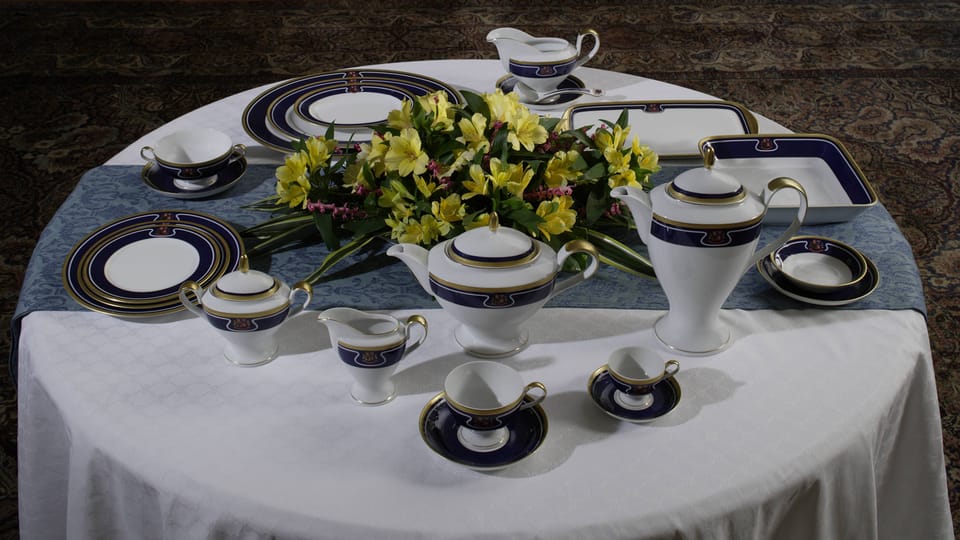