The west Bohemian town of Karlovy Vary (also known as Carlsbad) is well-known as a seat of luxury and wealth. Foreign kings and aristocrats have for centuries been visiting its healing spas, and in more recent times it has played host to the Karlovy Vary film festival, attracting scores of celebrities and famous personalities. It is therefore fitting that it is home to arguably the most prestigious manufacturer of luxury glass in the world - Moser. The company is one of the Czech Republic's finest brand names. And this year, it celebrates its 150th anniversary.

Josef Slunecko
Josef Slunecko is Moser's marketing director. At the Moser factory and museum in Karlovy Vary, he showed me samples of one of the company's trademark products, pictured in the hands of some illustrious clients:

"These are untypical Moser products, plain glasses. It's a set of 'Giant Snifters', six different glasses designed according to the physiognomy and character of a human being. There is a ceremony, the Giant Snifter's club, in the past, normally during the international film festival at Karlovy Vary. Movie stars come to Karlovy Vary, come to pay visit and still come to celebrate this festival. They use Giant Snifters for drinking, for celebrating, for show. Of course we have many famous members of the club, and we can see Laura Bridgett, this is Sophia Loren, Claudia Cardinal, Whoopie Goldberg, and even the master jazzman Louis Armstrong and his wife drinking from Moser Giant Snifters. It's tremendous. The biggest is roughly five litres. It's alot!"

The list of other famous personalities who have invested in Moser products over the years is extensive, ranging from King Edward the 7th of Britain, Pope Pius the 11th and the Turkish sultan Abdul Hamid. Due to its royal clientele, Moser has acquired the slogan 'King of Glass, Glass of Kings'. So where did this success begin? Josef Slunecko told me about the company's history:

Ludwig Moser|Photo: unknown, Wikimedia Commons, public domain
"Well the Moser factory, celebrates this year 150 years of foundation, in 1857 by Ludwig Moser. Ludwig Moser and his family was a German Jewish family and he founded a small shop and cutting workshop in the middle of Karlovy Vary in the spa, just serving wealthy visitors to the European spa here in Karlovy Vary. As the business grew, he decided to open and build up a glassworks here nearby to Karlovy Vary in Dvory, opening in 1892, 93, starting with own glass material, lead free, which was different to others on the market, and started creating his own repertoire, which was different and unique in comparison with the competitors of that time."

The Moser family sold all their shares in the business in 1938 when the Germans took over parts of Czechoslovakia and they were forced to flee the country. Their factory was privatised by subsequent German and Czechoslovak governments, and in the present day is run privately.

Glass production is no layman's task, and the worker's at the factory are all masters of their art. At the factory's glass blowing furnace, Josef Slunecko explains part of the process of making these works of art that stand in homes, embassies and palaces throughout the world:

"We are at the furnace. There is a pot inside with glass and it's like honey. The temperature inside is roughly 1300 C and the glass master just heats the final product just to finalise the process of forming the vase, and then the piece will be carried to the cooling furnace.

"Do you know exactly what this is going to be?

"This is a vase designed by Czech leading designer Jan Mares. The vase is called 'Triumph', and we produce the vase in a limit of 50 pieces only, and it's part of the collection for the 150th anniversary of the founding of this company."

Glass blowing is the most essential of the skills required in Moser's production, but a no lesser skill is that of glass engraving. In fact it is one of the company's specialities. Master engraver Vladimir Skala works for Moser, and is at the very height of his profession, having recently returned from an international show of glass-art engraving in Taipei. I asked him how the craft had changed in the 150 years since Moser's founding.

"The practical approach has not changed at all. Only our resources have changed really. That means that today we don't use natural sand or natural stones, nowadays we obviously use synthetic materials. Perhaps diamond cutting wheels have been a great help to us, but then again that's not everything. Diamond cutters can't make that finish that original engraving tools provide, where you use classical techniques, such as cutters and emery-wheel grinders which actually draw off the glass. So as I say, you can't replace everything with those diamond-cutters. The classic techniques are always the same as they were even in the 16th century, so for us not much has really changed. Oh excuse me, apart from electricity of course!"

Mr Skala added that, thankfully, unlike many of his forebears in the craft, he doesn't have to use a foot-pump to operate the machines.

With such a skilled workforce required to produce Moser's products, the company has to invest a part of its resources not just in production, but also in education and training, if it is to ensure its future and continued success. Luxury glass production is after all not just a business, but an art, and there is always a threat that without support from those with resources and know-how, that artistic skill and knowledge could be lost. Josef Slunecko explains just how Moser maintains its workforce:

"Well for the company nowadays work 350 employees, roughly 250 directly in the production process. It's true that we look instantly for new workers, good workers, cutters, blowers, engravers, because we feel a lack of this capable workforce, and we are in a state of expansion, because we have a large number of orders and we have to prolong delivery time. And our way is to work with the schools, in Karlovy Vary, in special schools, in Kamen Spisov, Zeleny Brov, in the university in Prague; mainly on designing new things regarding the university, but in Karlovy Vary for instance we have twenty two young students studying blowing, cutting and so on. The school is for three years, and we expect that in three years they will be working for Moser."

As well as these measures, the company founded the Moser studio in the 1990s, as an atelier for the best Czech designers, to encourage innovation in their products. Moser's designers have won numerous awards, and it is the daily task of the studio to come up with new designs to meet the needs of customers around the world. This individual approach to product supply and innovation is a major factor contributing to what, after 150 years of the company's history, looks to be its continued success. Josef Slunecko:

"We celebrated this year 150 years, it means the company is still alive, still in a very good mood, thanks to mainly the know-how of our workers, and of course awareness of the Moser brand on the market. In this sense I'm really very optimistic, because Moser found already a firm place on the market and Moser is I would say chosen really by connoisseurs, somebody who would like something special, something a little bit of an art piece, in an assortment of table-wear for instance - something special and unique where there is the touch of a human being." 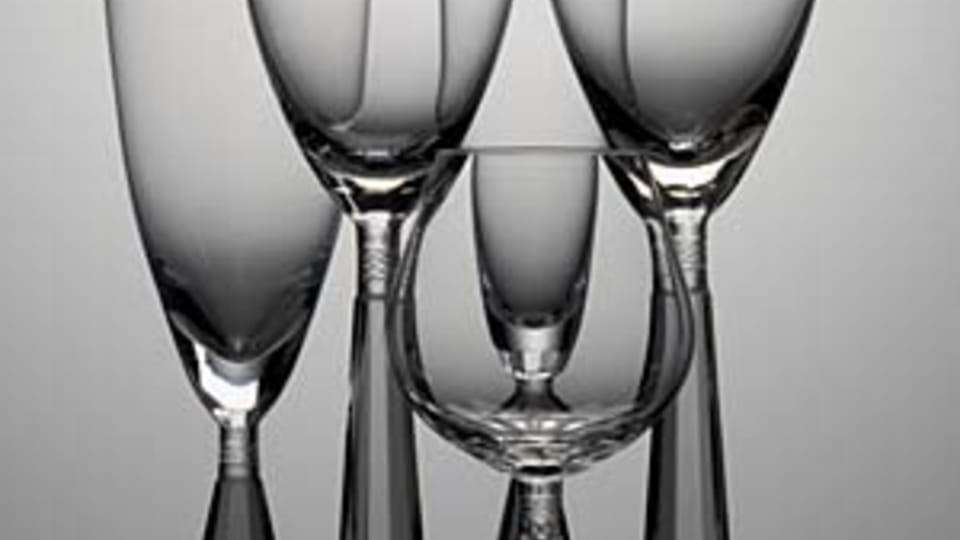