Facebook Twitter
“We are not ready to give up” – Protests in Prague after Russian invasion of Ukraine
Length of audio 8:06
People protest at Prague's Wenceslas Square, Feb. 24, 2022|Photo: Martina Schneibergová, Radio Prague International
Download
Share

Hundreds of people gathered on Prague’s Wenceslas Square on Thursday to protest against Russia’s invasion of Ukraine. There were also gatherings at several other places in the Czech capital, including in front of the Russian Embassy. Among the protestors were many Ukrainians living in the Czech Republic, their faces expressing shock at what just happened.

Since Thursday morning, the streets of Prague are largely silent and people speak little as Czechs process the shock of a full Russian invasion into the territory of a sovereign state.

Ukrainians are people most Czechs know well. Indeed, with over 200,000 of them living in the country, Ukrainians make up the second largest minority in Czechia after Slovak citizens. This, mixed with similar past experiences with Russia and the Soviet Union, led to hundreds of people gathering on Wenceslas Square on Thursday, to show solidarity with Ukraine.

A wide range of flags, some of them Ukrainian, others Czech, Slovak or the red and white of the Belarussian opposition, were being waved around the statue of Saint Wenceslas, accompanied by prayers, calls of “glory to Ukraine” and various other words of support. Many wore Ukraine’s blue and yellow colours, while others held signs with slogans such as “Stop Putin’s crime”, or “We will not give you Ukraine, Ivan”. 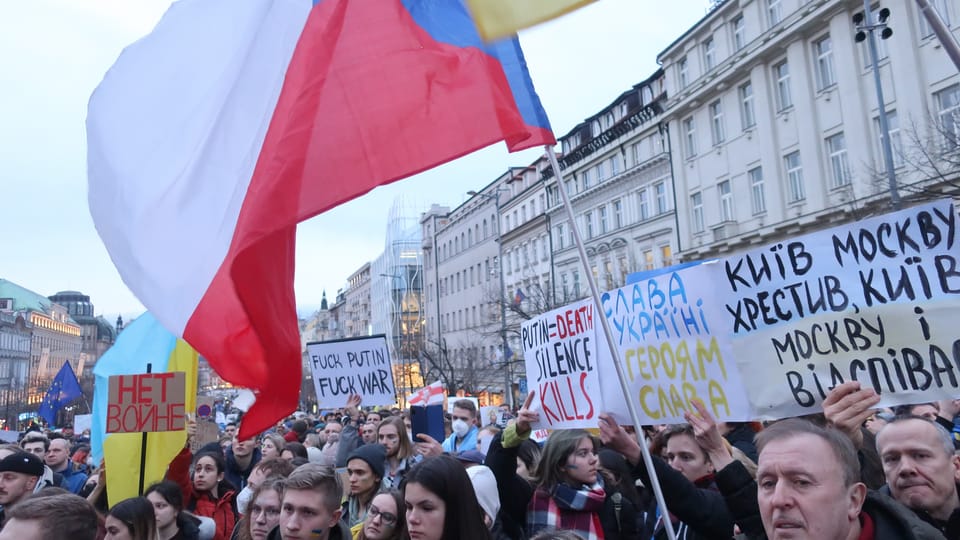 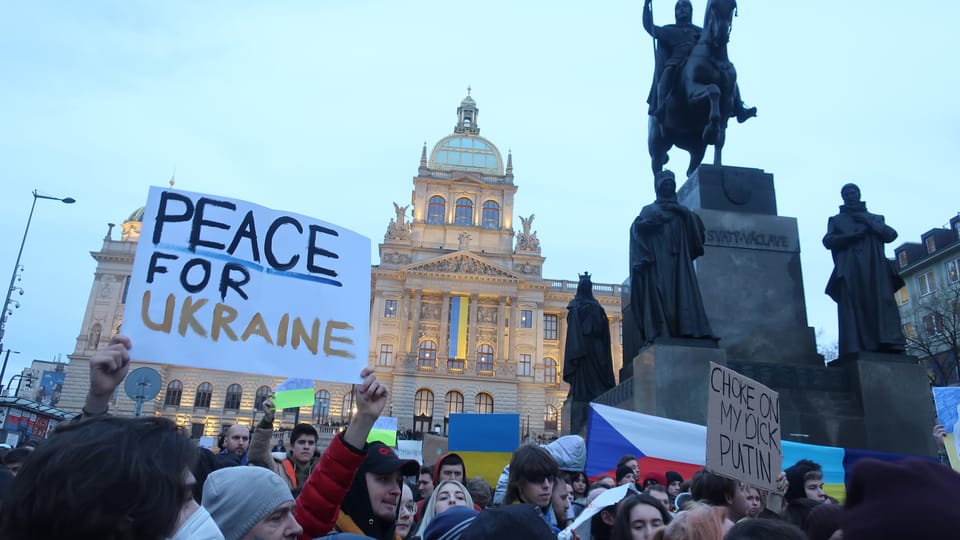 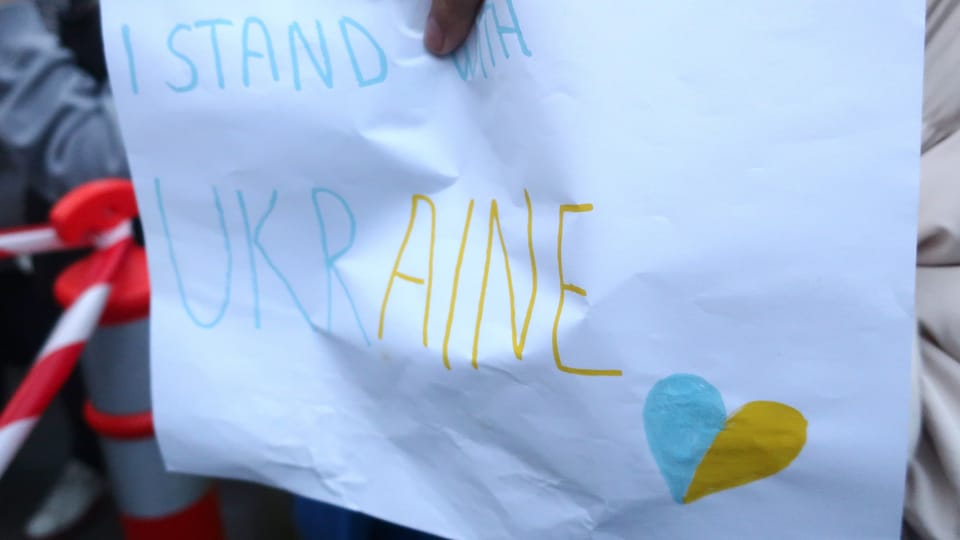 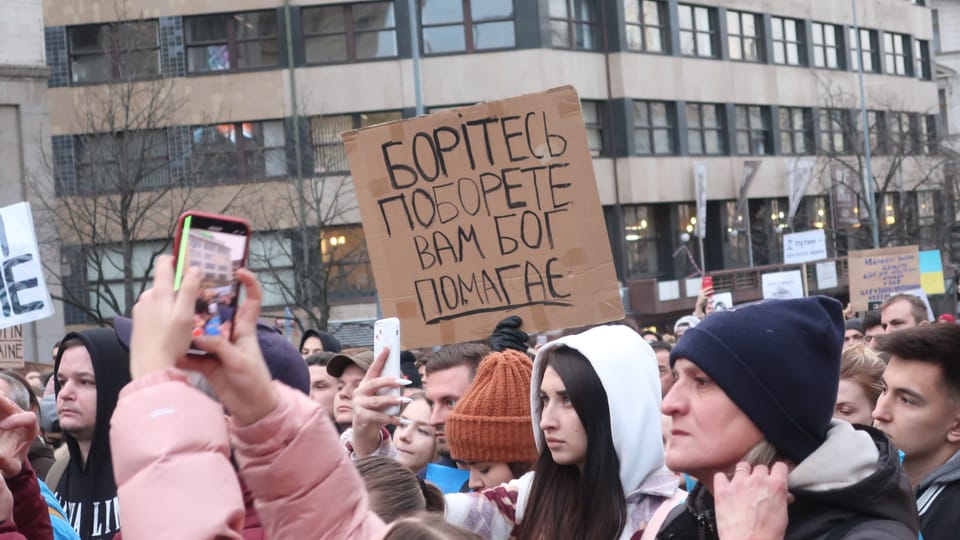 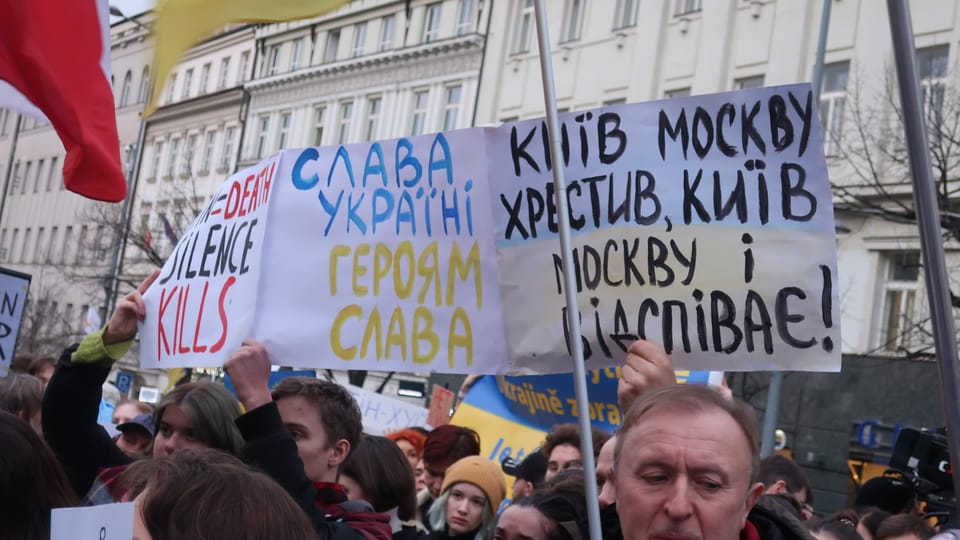 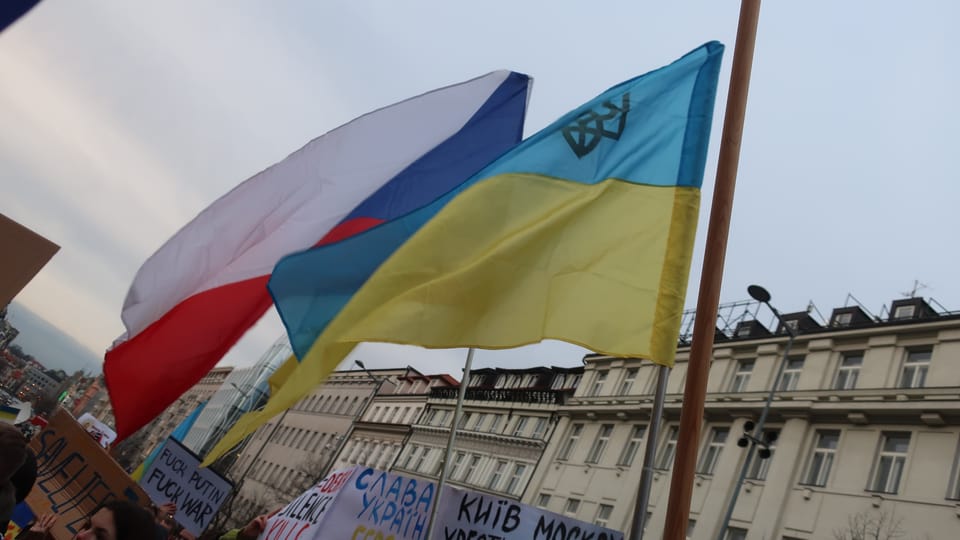 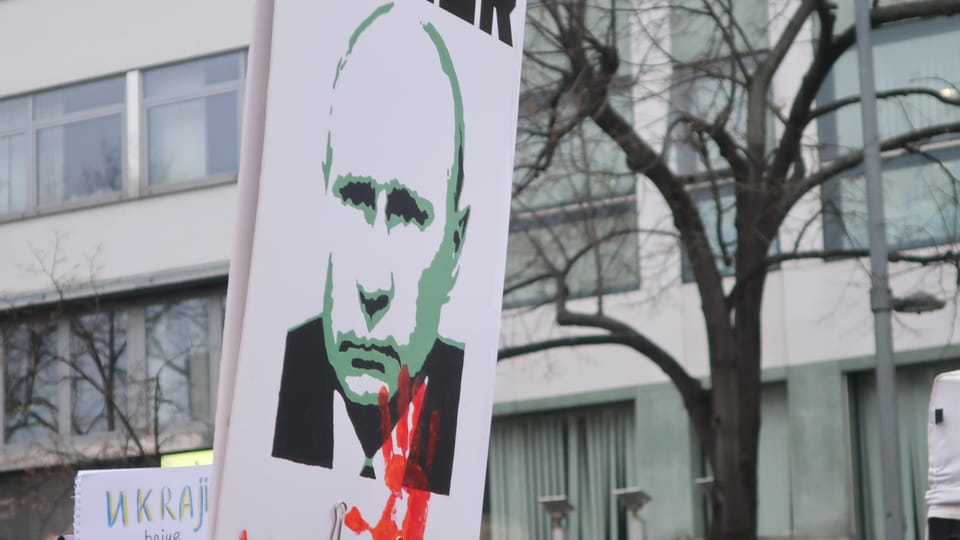 Perhaps unsurprisingly, Ukrainians also made up a large number of those who turned up to the protest. Among them was Masha, a young Ukrainian woman who took part in the Maidan revolution in 2014.

“It was terrible and until the last moment I didn’t believe that it was actually possible. We are really hoping for the best right now, waiting for support and, as I said, we are not ready to give up.”

Are you thinking of what will happen in the future, or are you still confident that Ukraine will defend herself?

“Absolutely. Ukraine is going to defend itself. That is guaranteed. In the worst case scenario we are really hoping that the Czech Republic and other European Union countries can take actions and help Ukraine defend itself.”

What do you think would be the most helpful thing that the EU, or the “West” could do for Ukraine in this situation? Is it the sanctions?

“Sanctions, of course. As for me, I am not looking to escape and neither is my family. We are on our land and are looking to protect it. We are not going anywhere and we really hope for financial and military support, but we are not ready to give up on our lands.”

Do you have any family members fighting in Ukraine?

“Yes. Actually all of my family is there. This morning, my father entered military service in our region.”

Has he told you anything?

“He told me that I should take care of myself and not worry about him.”

Also in the crowd were Volodya and Katya, a Ukrainian couple who are studying in the Czech Republic. They said that they felt all alone against Russia, with no serious international support.

“I think that the world should do at least something, because they are doing nothing at all right now.”

“At least we can be here to show our protest, maybe donate to the Ukrainian Army and just pray.”

What do you think of the Czech government announcing it is opening up to Ukrainian refugees? Will you or your family members make use of this option?”

“My mother and father will be in Ukraine, because my father does not want to just leave the country. He wants to fight. However, I would like my sister to be here, because she is 18 years old and I am worried for her.”

The Ukrainian ambassador to the Czech Republic said earlier [on Thursday] that he expects Ukrainians will be going back to their home country now, to help defend it rather than the other way round. Have you also thought of going back to Ukraine, precisely at this moment? Is this the moment that a Ukrainian should go back to their country?

“I certainly think that there will be people who go back. It is a moment when you really want to help your country and I don’t really think that we can do at least something here.”

“I am just scared, because even if I was in Ukraine. I couldn’t help.”

A few dozen meters away from them, a group of youths chose to express their anger and shock more vocally, shouting abuse at Russia’s President Vladimir Putin.

However, even in this situation, Katya raised the importance of remaining fair to Russians living in Czechia.

“I would also like to say that I have a few stories that I’ve heard from my friends here, where, for example, the teacher at university said that those who are from Russia cannot take part in the lecture. I don’t think that it’s good to just hate all Russians, because of the situation. Especially since those Russians that are here are here for a reason – they don’t like their politics.”

Have you noticed people getting a bit angrier at Russia right now?

“I told you I have a few stories. For example, my friend was talking with her mother on the phone and some guy just…

“Because she’s talking Russian. But I am from Ukraine and I also speak Russian, simply because we are used to doing so when we talk among family. It doesn’t mean, however, that I am a bad person because I speak Russian.”

Thursday also saw a smaller group of protestors gather in front of the huge Russian Embassy in Prague. Surveyed by local police, the demonstration was peaceful, but sheer outrage at what had happened led one of the protestors to kick the metal fence separating the group from the embassy’s fence, before being quickly moved away by the police. “A sudden burst of emotion,” he told Czech Radio, “I am not an aggressive person, but this is the Russian Embassy, the only place where you can have at least some influence.” His family, he said, is still in Kiev and worried about the lack of food supplies.

Aside from demonstrations, many Czechs are also donating money to Ukraine and her armed forces. According to Šimon Pánek, the director of one of Czechia’s leading human rights NGOs Člověk v tísni, over CZK 100 million has been donated by Czechs to Ukraine over the past three days.

“Where possible, the money will be used for help in Ukraine. Right now it is not clear what will happen. The situation is developing very fast. Now it is largely people fleeing from the Ukraine. Few things are moving into Ukraine. The money will mainly be used to support families, people on the run, whether they are in Western Ukraine, or in the nearby states. However, it will be used also to help Ukrainian’s finding refuge in Czechia, if it is necessary.”