The Velvet Revolution in Moravia

The Velvet Revolution in Moravia

Copy
The Velvet Revolution in Moravia
Length of audio 12:19
Ringing the keys as the death toll for the totalitarian regime, photo: Michal Štosel
Download
Share

Thirty years ago the communist regime in Czechoslovakia started to fall apart. The main demonstrations and events were taking place in Prague. But the key question was whether the regions would join in and support the not so numerous college students and actors in the capital who were calling for a protest strike. Vít Pohanka witnessed how the Velvet Revolution started in the Moravian city of Olomouc:

Students meeting at the Palacky University Sports Hall, photo: Michal Štosel
It was Friday, 17th November 1989 and the communist riot police brutally suppressed a peaceful student demonstration in Prague. I spent the following weekend glued to the radio, listening to the news on Radio Free Europe and the BBC World Service.

As a student of Czech and English at Palacky University in Olomouc some 150 miles east of the capital, I doubted that the protests would spread to the regions. I did not believe that the communist regime was ripe to collapse and I was determined to defect to the West as soon as I had finished my studies.

To my surprise and that of many other sceptics, even students in the provincial town of Olomouc were already fed up with the totalitarian government. Ivan Langer was a student of medicine in 1989. Later on, he became an MP for the Civic Democratic Party and even served as minister of the interior. He agrees that we were at first more hesitant than in Prague.

"It was harder to start the student strike and protests. I think the regime had more clout in smaller towns like Olomouc. On the other hand, there was one significant advantage: we knew each other quite well, so it was easier to put people together, to get organized.“ 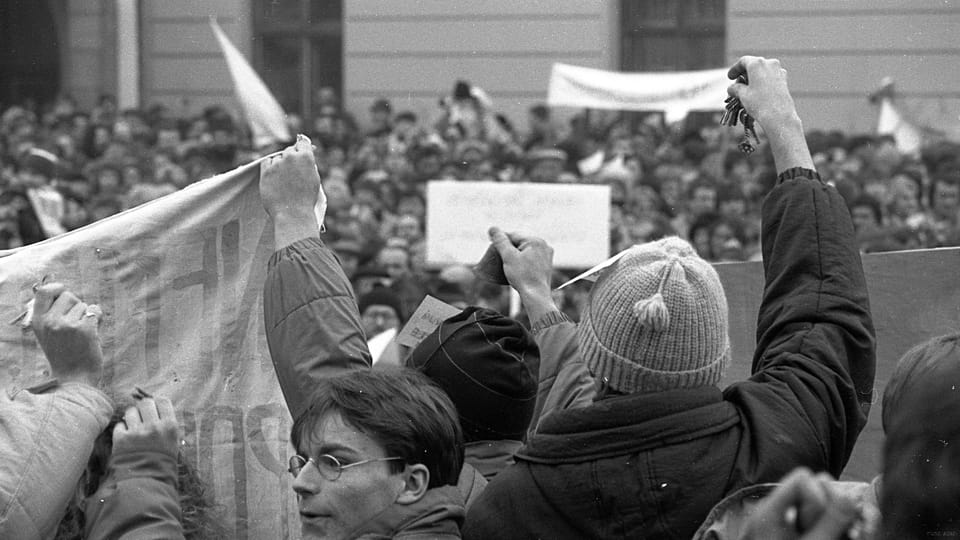 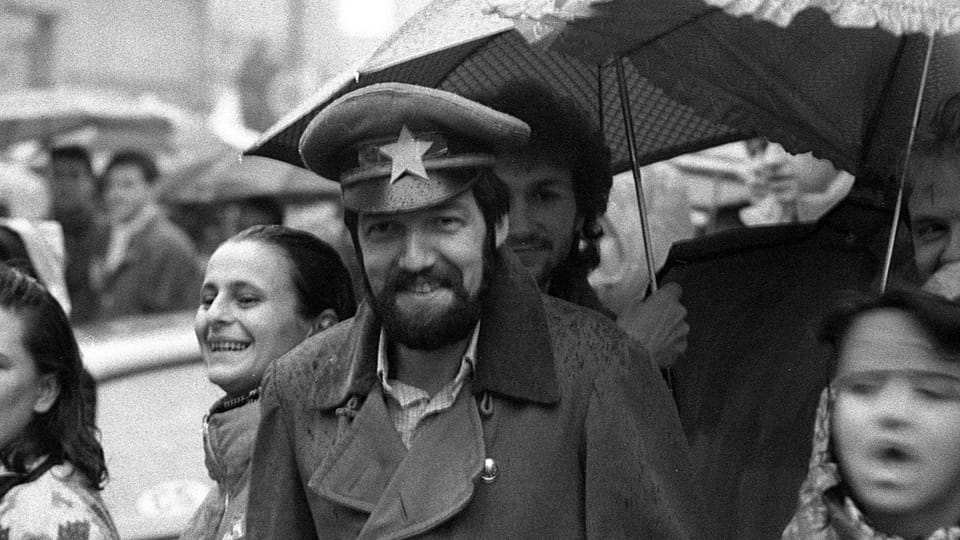 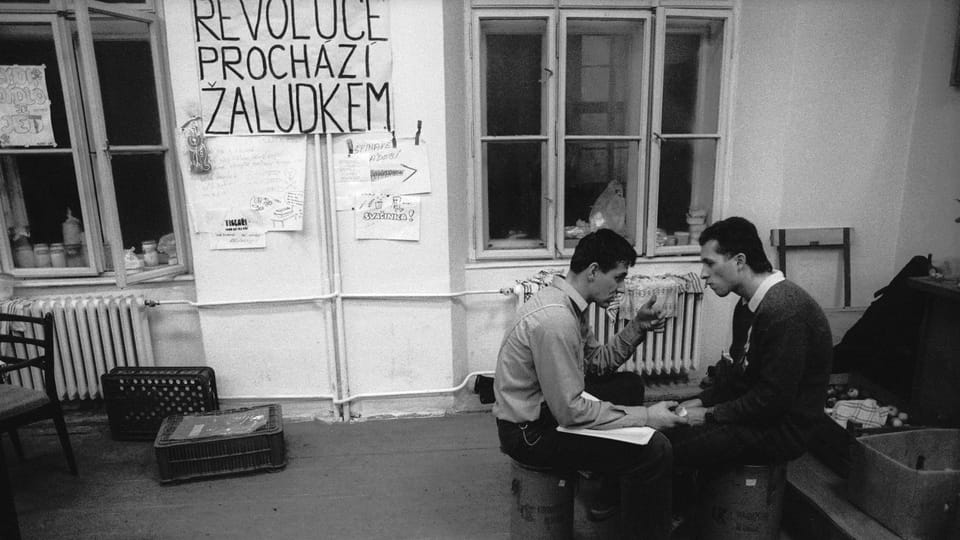 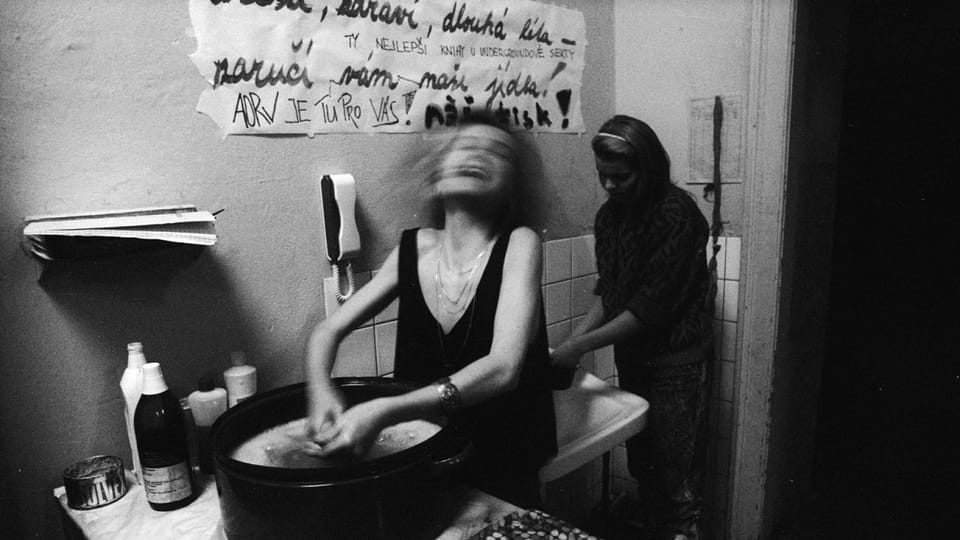 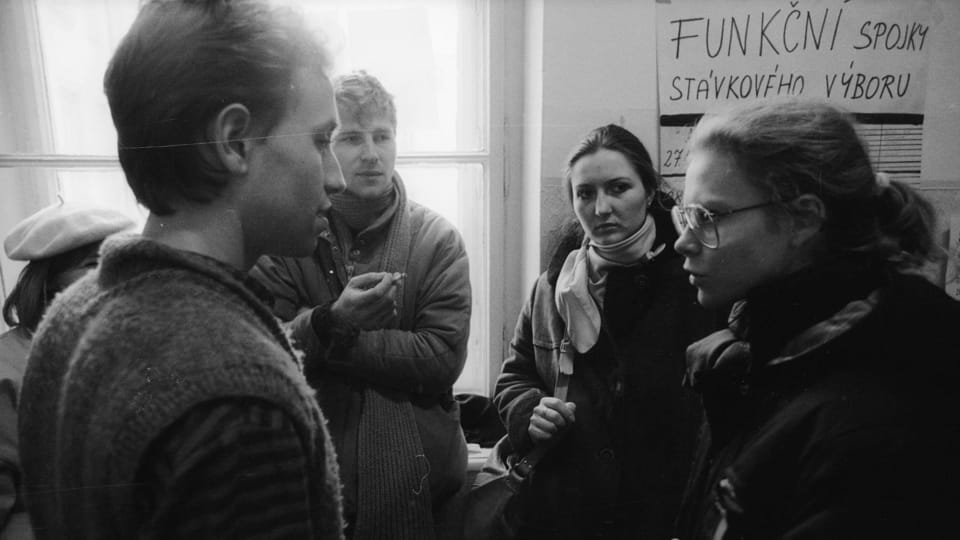 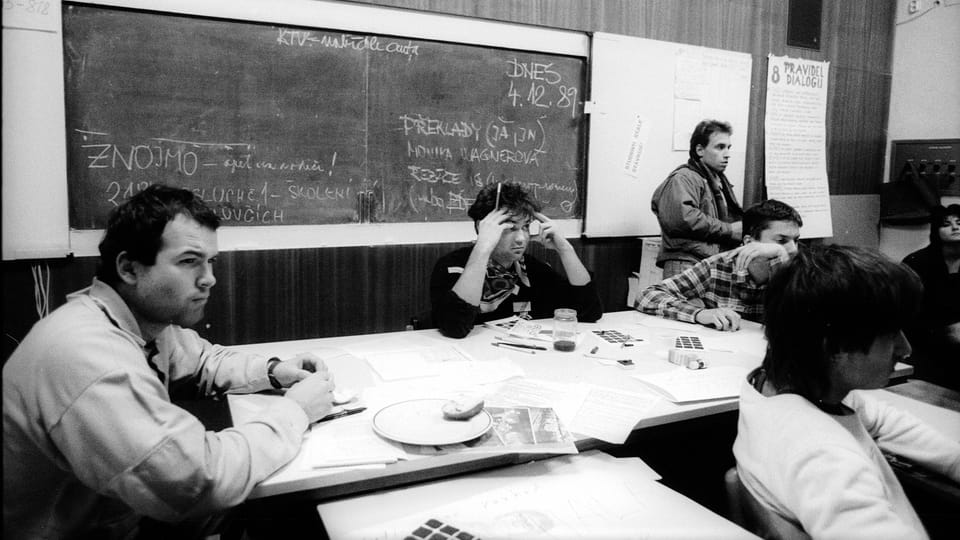 Another former student of medicine Vladislav Raclavský remembers the tense meetings during those early days of what would later be called the Velvet Revolution:

"There was a meeting at the dorm where I was elected a member of the strike committee for the School of Medicine. We faced our teachers at a meeting in the main lecture hall. I remeber standing there, facing the table, where the dean of the faculty was sitting together with the main Stalinist ideologue whose name was Soviar and who was very aggressive.

And Soviar started threatening us. Indirectly, but very menacingly in a way that everybody understood. He said: "Keep in mind that you have a university student card in your pockets. So behave and act accordingly.“ This was, of course, only a thinly veiled threat: "If you want to finish your studies, wake up!“

Student demonstrations in Olomouc were merry affairs satirizing symbols of communism, photo: Michal Štosel
And it was not a man who raised his voice and stood up to the bullying, but a petite young woman called Katka Kuzniková. She stood up and answered: "Yes, I have a university card, but I am also a citizen and that is more important to me!“ For me, that was the breaking point. People started applauding and suddenly Soviar, the almighty Stalinist, was very, very small, indeed.

And it all happened very quickly, suddenly, it didn’t take more than a few seconds. One minute Soviar looked very powerful, capable of expelling us all from the university. But all it took was that young woman who stood up and spoke and everything was different!

What followed was something unforgettable for all those who took part in it: hectic weeks of meetings, demonstrations, negotiations. Even for Ivan Langer, who would later experience a lot of turmoil as one of the country's prominent politicians, it was the most intense period of his life. Another member of the strike committee thirty years ago was Jiří Křeček who is now a civil servant at the Ministry of Education:

"You must remember how it was. Everything was happening so fast! One did not have time to think much. We lived minute by minute, slept some three hours a day and it went on until the end of December.“

Thirty years later, the former student leaders get together in a cafe in Olomouc. Now middle-aged men and women prepare to remember the events of November 1989 by re-enacting the occupation strike of the Faculty of Arts – of course, after getting official permission to do so by the present Dean of the Faculty. Martin Štainer is the main organizer:

Production of leaflets and posters, photo: Petr Zatloukal
"We will welcome anyone at the Faculty of Arts which was the nerve centre of the student strike in 1989. We want to show people the places and rooms, where we were met, organized protests and information campaigns. We want to recreate the hub of our strike after thirty years, to show what it was like during our revolution.

The invitation is meant both for former students, who were here and remember those heady days, and younger people, who would like to learn about what happened. We want them to see how we made posters, printed leaflets, organized travel to the regions, concerts, etc.“

For Martin Štainer, one thing is crucial: it must not be forgotten that thirty years ago it was not the academics or other official representatives of Palacky University or the city of Olomouc who took the initiative. The students themselves swung into action starting a chain of events that led to the fall of communism in their country.