Retired US astronaut Eugene Cernan is one of only three people to have travelled to the moon on two different occasions. In fact, he is the last human being to have walked on the moon: as commander of the Apollo 17 mission in 1972, he was the last astronaut to re-enter the Apollo Lunar Module before the crew returned to Earth. As the name might suggest, Mr Cernan is of Czechoslovak descent. Indeed, he carried Czechoslovakia’s flag with him on his final space flight. He told me why:

Eugene Cernan, photo: CTK
“I took some special flags. Because of my background and heritage I specifically requested a Czech[oslovak] flag to take, with the intent of bringing it back here. Of course at that time, it was one country.”

And what happened when you tried to bring it back here in ’74?

“It was a very trying time back in 1974. I was officially not recognised as a visitor, although everybody knew who I was. I was able to at least deliver the flag – not to the government officially, but I think in the end it went to the Astronomical Society.”

I’m sure you’re tired of this question, but how did it feel standing on the moon and looking back at the Earth?

“It’s a tough question to answer. It was overpowering to realise where you were in that moment in space and time and history, and that that’s the Earth, a quarter of a million miles away.”

You also took part in spacewalks. For me, that’s equally as mind-blowing as walking on the moon – how did those experiences compare?

“On my first flight I did a spacewalk. At the time that we did it we didn’t know what we were doing. I almost lost my life on that one – in my book I call that chapter ‘Spacewalk from Hell’. We learned a lot, though it was a harrowing experience.

“Now they do it every day, it’s sort of common-place, though it’s still very dangerous. But when we did it many, many years ago back in 1966 it was…unusual. I was only the second American ever to walk in space.”

Tell us, if you don’t mind, the lovely story you told us earlier about visiting Slovakia, and the church that also played a part in the history of your family.

“Yes, several years ago I was in Vysoká nad Kysucou and had a chance to go to church, to go to mass, where my grandparents were baptised in the place they grew up as children, long before they emigrated in their early 20s to the US. That was a special experience.”

By the way, the Czechoslovak flag Eugene Cernan carried with him on the moon is now on show at an exhibition at the National Museum in Prague; it was there that I spoke to the former astronaut on Wednesday. 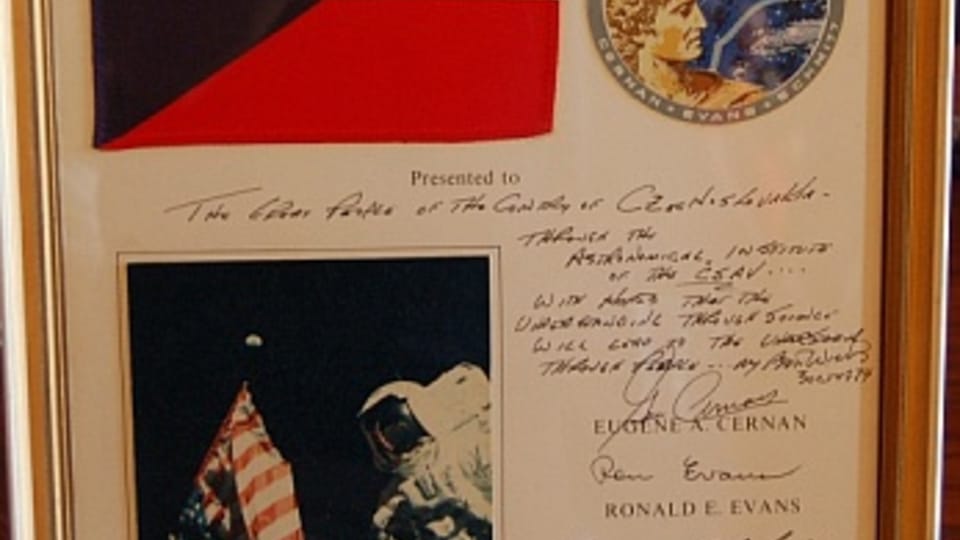