Prague’s Municipal House is one of the gems of the city’s rich Art Nouveau architectural history. And the complex’s café is one of the best ways of getting a taste of pre-World War 1 and First Republic café society in its heyday.

The whole Municipal House complex, built on a triangle of land where the former royal court of the Bohemian Kings used to stand in the middle of the city, was launched with a competition for architects to come up with plans in 1903.

But the public tender – in an echo of current practice – did not meet the aspirations of the city elders and they decided to go with their own choice of architects instead. The whole complex was completed between 1905 and 1912 with many of the most famous Czech artists and designers having a hand in the final work of art.

The building entered into history when an independent Czechoslovakia was declared there in 1918. In a later echo, it was also the scene for one of the first meetings between dissidents and representatives of the ruling regime that paved the way for the end of the Communist regime in 1989.

The main café is on the ground floor with a gallery in the same Art Deco style on the first floor. Tomáš Bílek is the café’s commercial director and described the impression that will strike visitors on their first visit.

"The whole café is a large, beautiful, and well-lit area. You can come in take a seat and imagine yourself in the era of the first Czechoslovak Republic. It is photographed a lot, mostly by foreign tourists. A lot of them just come in to take photographs of the entrance and interior, which is of course marvellous, and then they go.ʺ 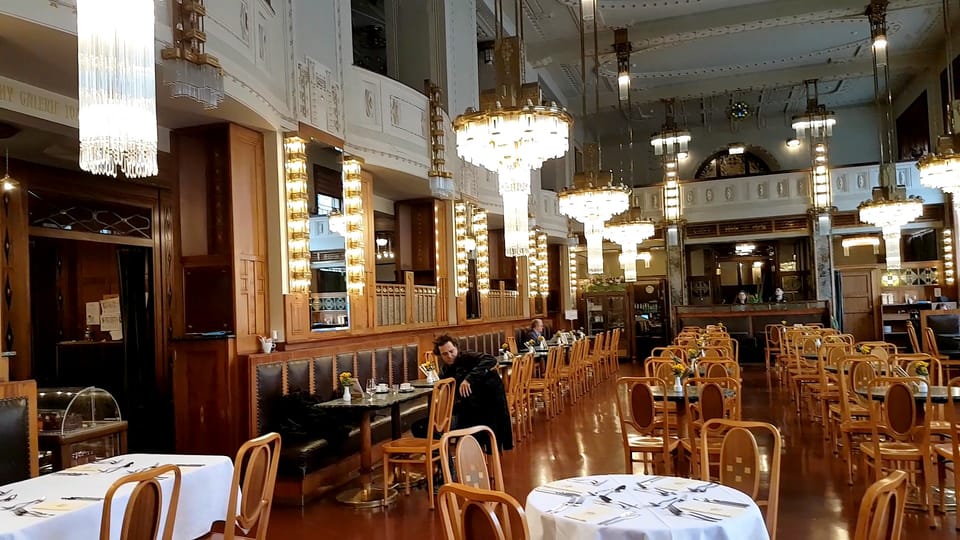 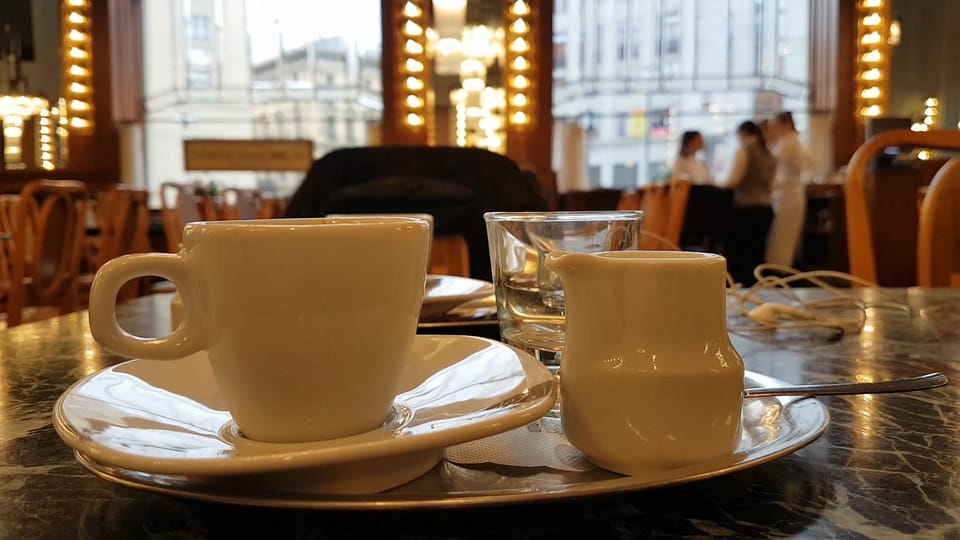 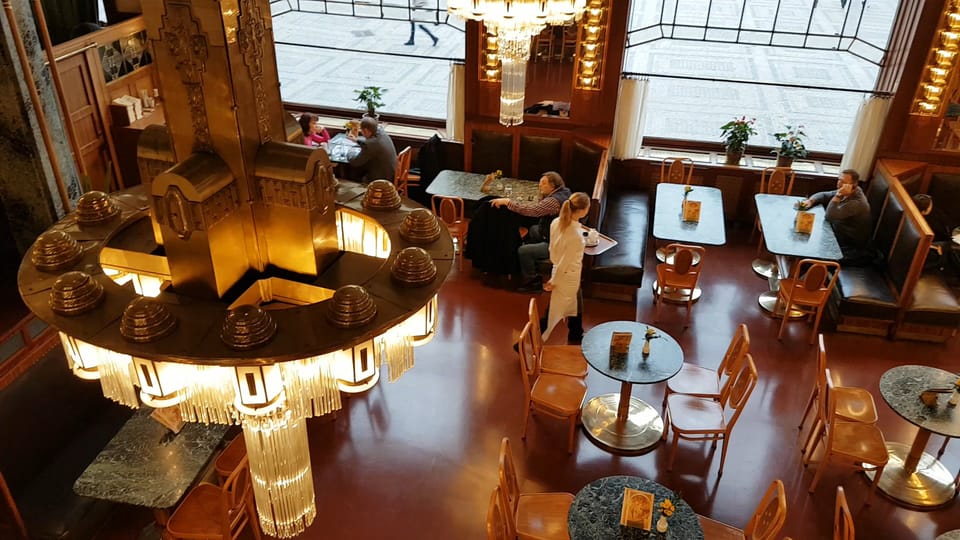 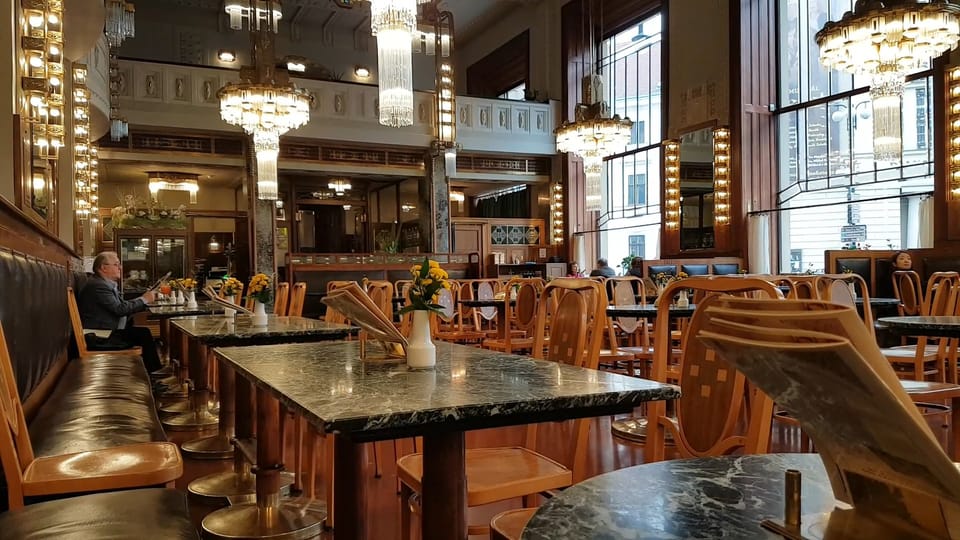 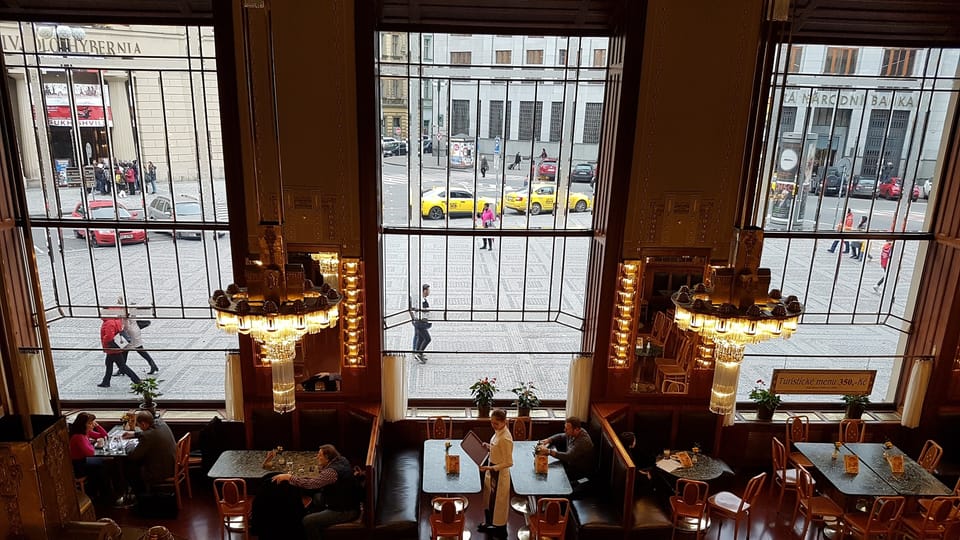 Those who care to stay a bit longer than a fleeting visit can enjoy a coffee and a selection of cakes that the café likes to boast are the equal of anything on offer in Vienna. A special local cake, such as the Wiener dort, though is not available. Visitors can also take in some of the Art Nouveau decorations and other attractions of the cafe.

"When you come into the café, right opposite there is a fountain with a relief of nymphs created by the sculptor [Josef] Pekárek. The chandeliers are by František Křižek, which have been gradually restored after damage. There are mahogany boxes with leather covered stools. The chairs are replicas for the most part since only a few of the originals remain and they are in storage.ʺ

While the whole building, with its complex of exhibition rooms, meeting rooms, and symphony hall, is a mecca for everyone, tourists do predominate in the summer. But if you choose you time or season carefully throughout the rest of the year you can still escape the crowds and perhaps enjoy some more of the authentic atmosphere.

"Of course Czechs do come here because we in a good place for meetings. It’s not just for businessmen and managers but also for ordinary Prague people. I think everyone can allow themselves the luxury of coming to the café without it ruining them. We are on the royal route and when we have the seats outside we are sometime surrounded by tourists. Tourists then will outnumber Czechs. But at certain times in the morning and out of season and at mid-day it can be the place for meetings between Prague people as well.ʺ