For today's spotlight, and with the coming of spring firmly in mind, I hopped onto the 112 bus and headed for Prague's Botanical Gardens. Prague has the unusual accolade of having two sets of Botanical Gardens. I focused my journalistic powers on those in Prague 7, right beside the zoo. The Gardens' spokesperson, Marcela Uhlikova, showed me around. We started in the outdoor enclosure, dodging the convoys of tractors, diggers and ploughs.

"So here we are in the outdoor section of the Botanic Gardens, and I apologise if it gets a little bit noisy, because as you can see, spring has arrived. Winter, gave us a bit of a break, but is now over. The snow covered everything for so long, but now that it has melted, we can see what we need to fix."

Winter seemed particularly long in Prague this year. The leaves still aren't on the trees and the usual crop of Easter 'snezenky' or snow drops, are nowhere to be found. But Marcela tells me that this sort of long and snowy winter is just what plants love.

"This winter may have seemed like a really bad winter because there was so much snow, but the gardeners here love winters like this. It was very damp and there was no big frost. When this snow came, the flowers were completely covered. We say they 'slept under a blanket of snow'. When this snow started to melt it trickled into the ground and gave the flowers a more thorough and pleasant watering than they normally get too." 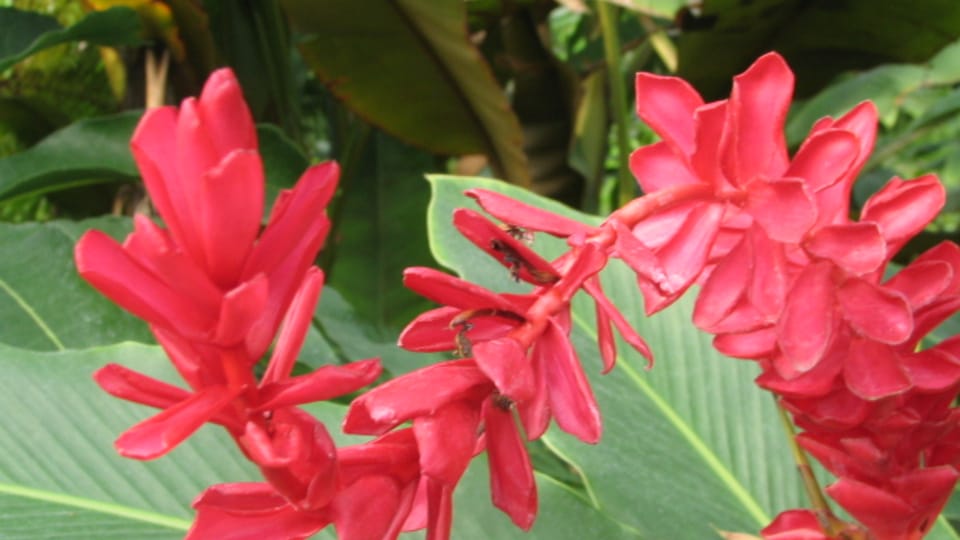 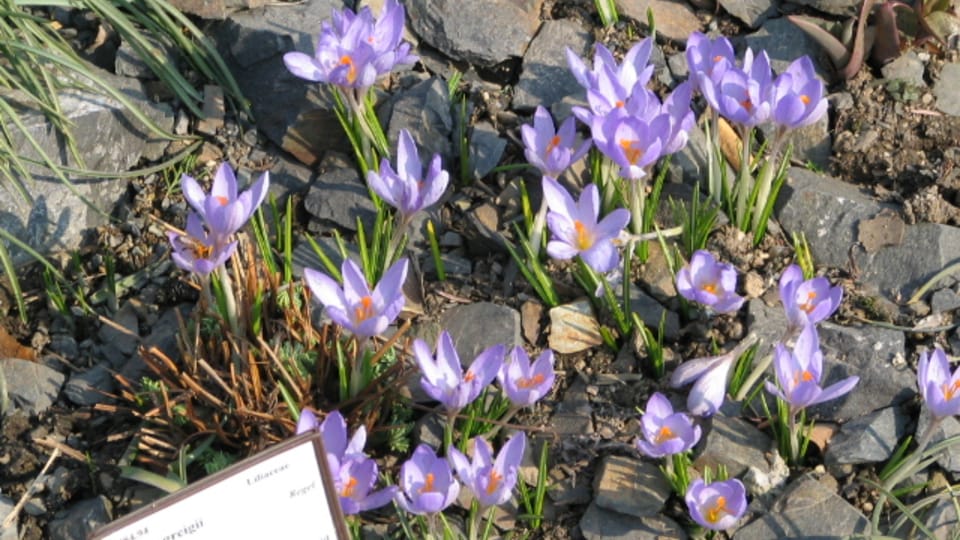 The Botanical Gardens are expansive to say the least, and connected by a series of residential streets. As we trekked up to the impressive-looking 'Fata Morgana' greenhouse, Marcela pointed out a little green house in which the gardeners bred frogs.

Blind Cave Fish, photo: JohnstonDJ, Creative Commons 3.0
I asked Marcela about the other wildlife to be found in the Botanical Gardens. As well as a band of wild pigs which escaped from a nearby slaughterhouse a couple of years ago, Marcela mentoined the 'blind cave fish' which the gardeners breed:

"Blind Cave Fish come from around the Mexican island of Yukatan, and the reason that they are interesting is that when they are born, they are not blind at all. In fact quite the opposite, they have 20:20 vision. But because they spend their lives in caves they don't actually need to see. So, in their first couple of days they lose their sight and skin grows over their eyes. They learn to get by on smell and touch alone." 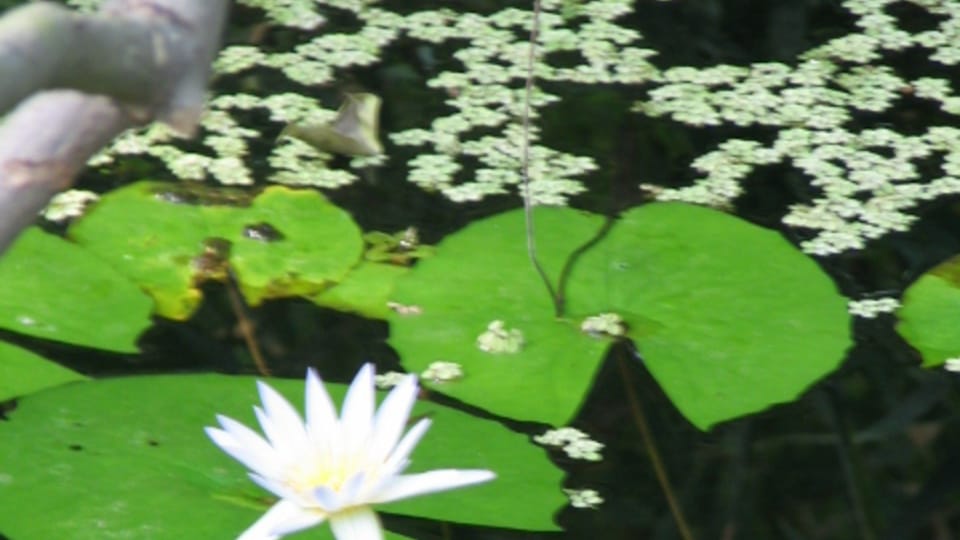 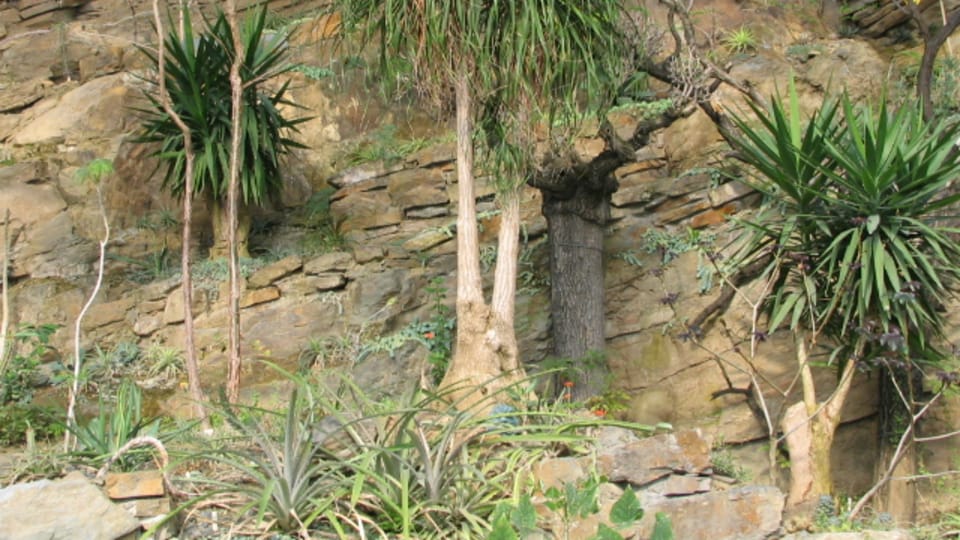 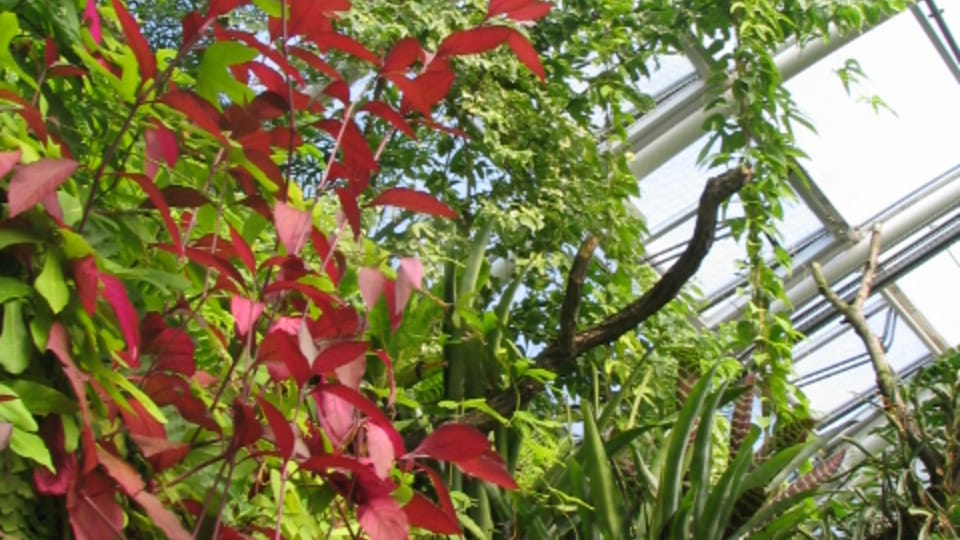 On our ascent to the Botanical gardens' newly-constructed showpiece - the Fata Morgana greenhouse - Marcela primed me for its central attraction:

"One of the flowers you'll see in the greenhouse is the Strongylodon. As the name would suggest, this is a rather exotic plant. It is still flowering right now. It's a bluey-green coloured flower, which looks a bit like a parrot's beak. It's particularly interesting because it was planted here when the gardens were first opened in 1836. At this time, American botanists were collecting flowers from all over the world, and a lot of them ended up in the botanical garden's collection."

So after all the anticipation, I am now in the Fata Morgana greenhouse, winding my way from desert to rainforest and back again. A hanky would be helpful to mop my sweating brow. It would also make a useful pomander when it came to certain plants...

"If you had come a week earlier, then maybe you would have seen this plant in full bloom. It's called 'Devil's tongue', people often grow it at home, because it is very beautiful until it starts to blossom, and then it smells absolutely terrible. Some people say it smells like decaying meat, others insist that it is more like smelly socks. Either way, in this hot and damp environment it is absolutely disgusting."

The Fata Morgana greenhouse is also home to hundreds and hundreds of butterflies, which aren't the shyest of creatures. The spectacle that unfolded before me then, was by no means rare. But it still was lovely to see...

"Can I ask what has just happened to you?"

"That has never happened to me before, that beautiful butterfly just settled. I must be very blessed, I'm sure. {Shrieks of delight}" 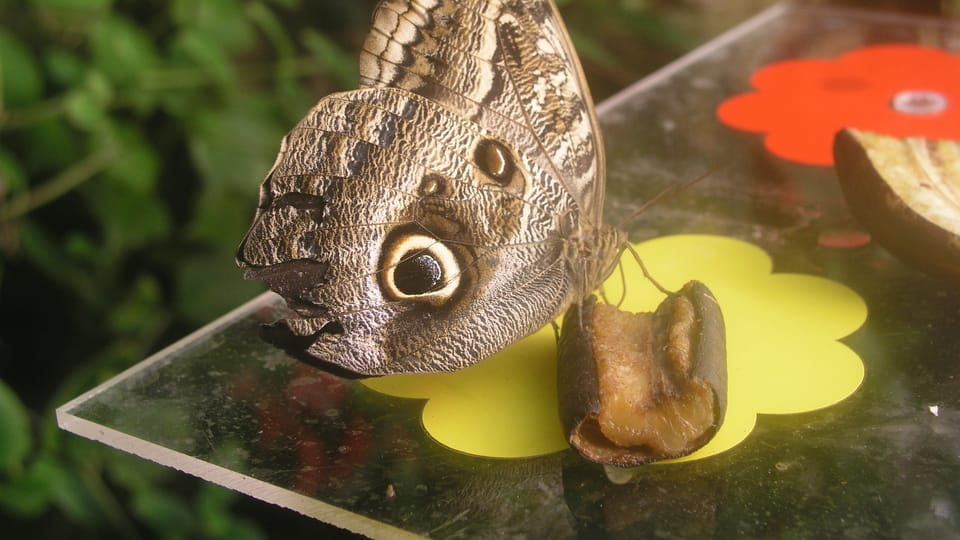 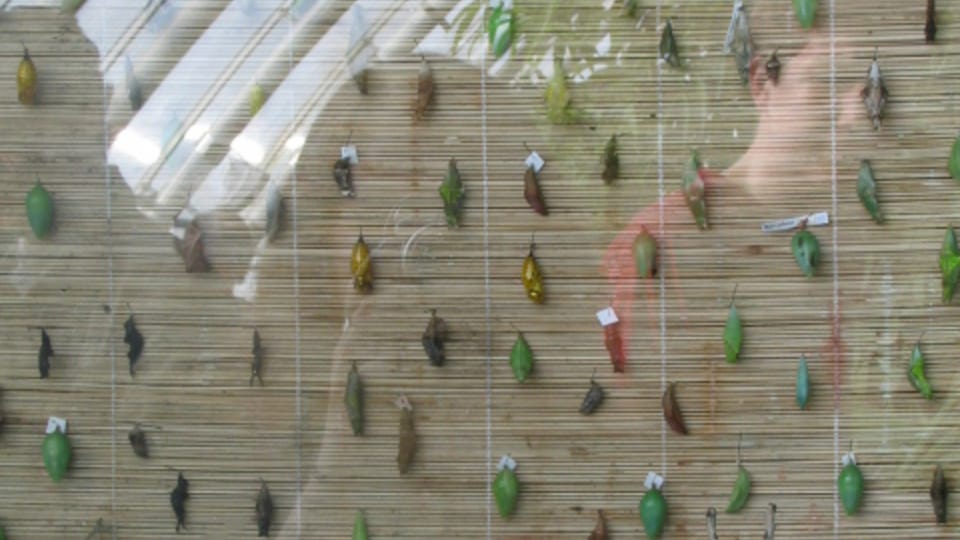 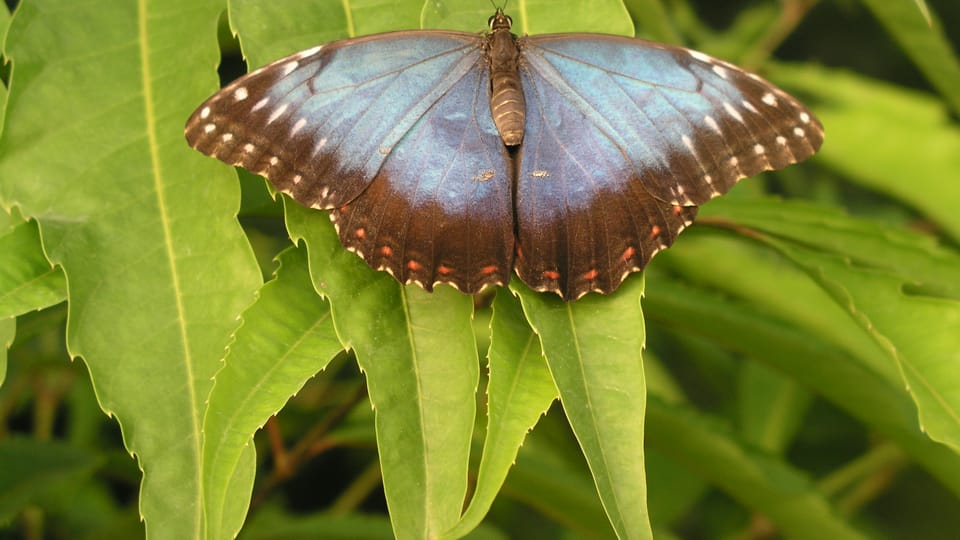 Butterflies at the Botanical Gardens hatch in an artificial environment. There aren't enough prime branches around, so caterpillars have to make their cocoons in three big, glass boxes instead. Some of the cocoons look more like jewelry than living creatures. Visitors can watch them hatch. The process takes around two hours, which I will spare you from listening to. Instead, here's Marcela explaining the reason behind these boxes' odd shape:

"These boxes are on stilts, and the stilts are in the water. You might be wondering why... Well, it's because ants love to eat the butterflies' cocoons, so we've placed this natural obstacle in their way and now they can't get at the butterflies."

The butterflies also seem to be behind the colourful piles of rind found all over the greenhouse:

"Butterflies eat flowers, more specifically their nectar. But we don't have enough flowers here for all of them, so we leave out fruit too. They absolutely love rotting bananas and oranges. Today it was me that sponsored their lunch."

...And now it's time for mine, I'm off to slurp on an ice cream, in the most exotic flavour I can find. It's a shame that Strongylodon isn't on the menu. 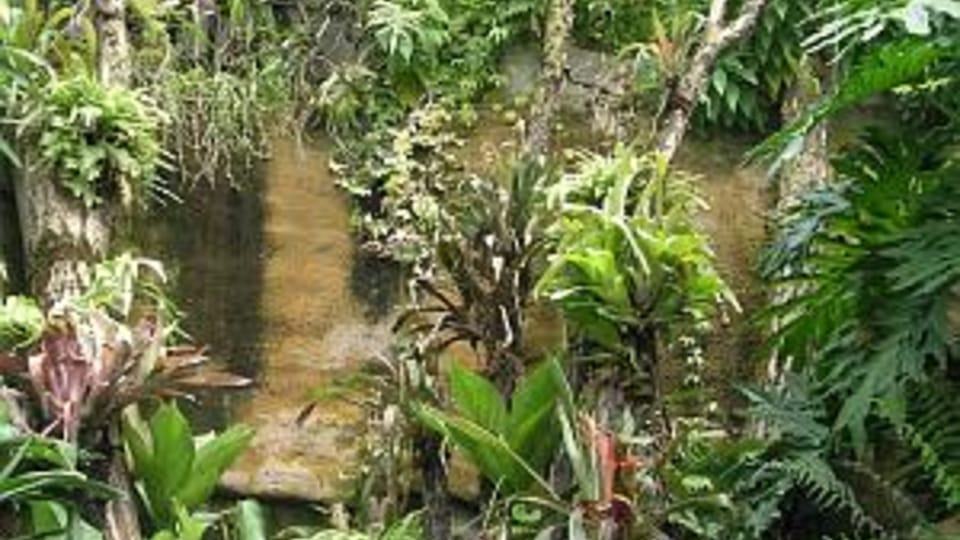 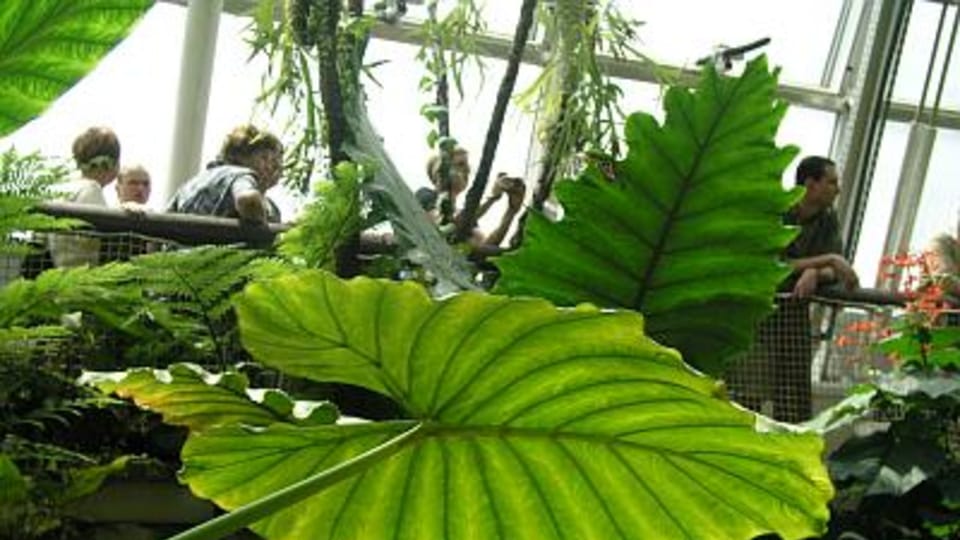 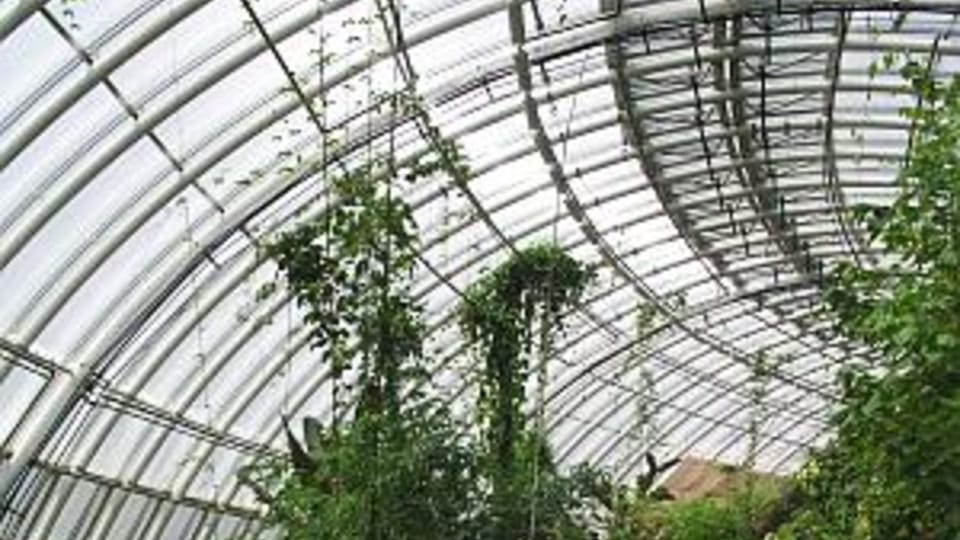 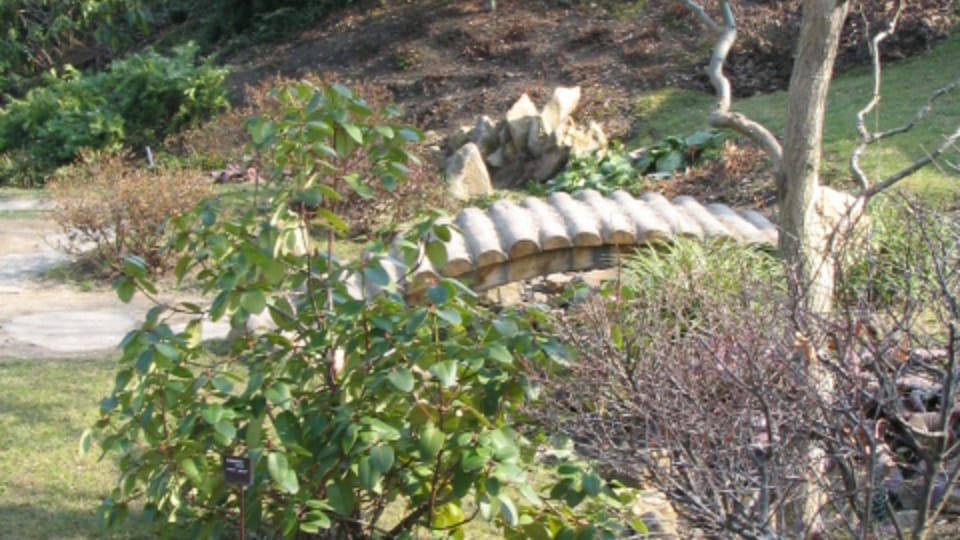 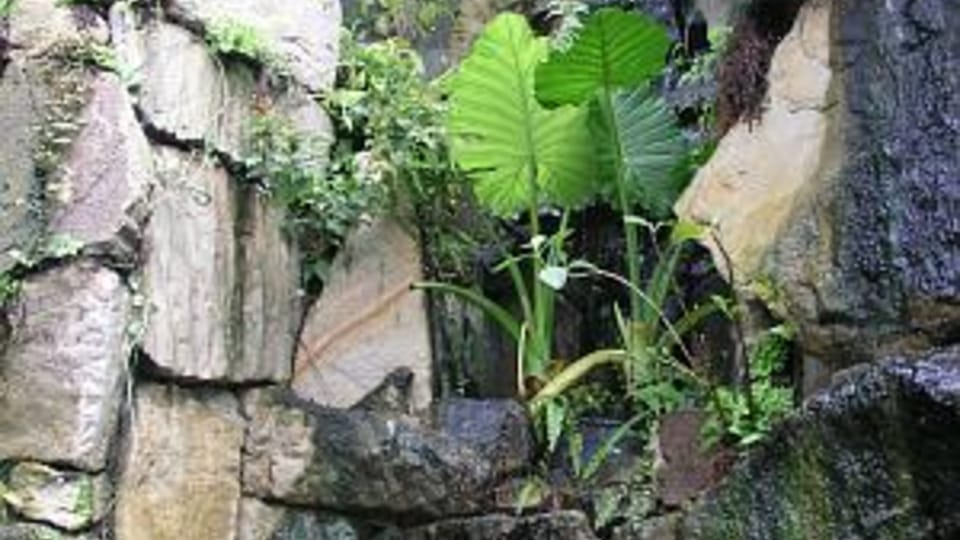 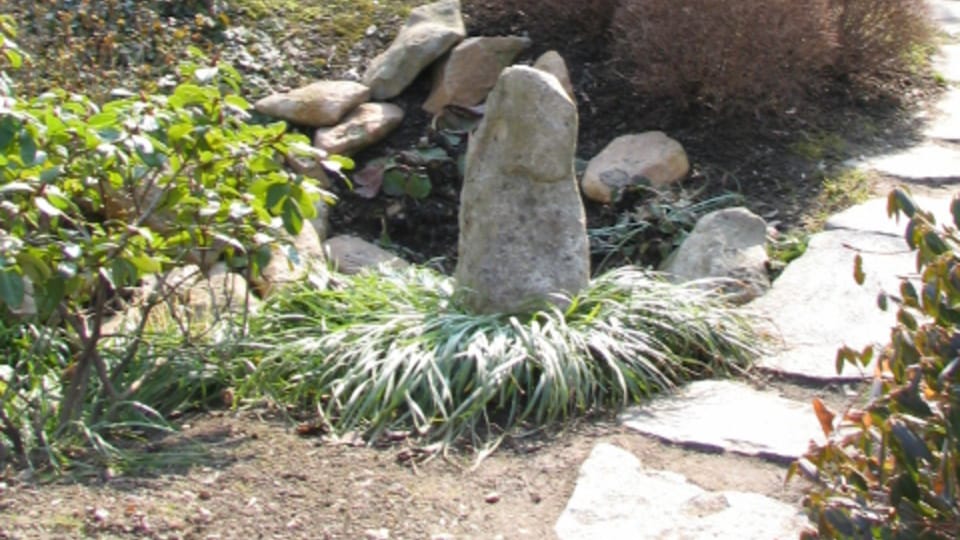