Ski hills in the Czech Republic had reason to be happy last year, seeing lots of snow and consequently a boost in business. So far, this season is shaping up quite nicely as well (although there hasn't been snow in Prague). Radio Prague took the opportunity to hit the slopes at two of five hills run by operator Mega Plus s.r.o.

Photo: Ondřej Tomšů
Those are the well-known Černá hora and Pec pod Sněžkou in the Krkonoše Mountains.

Our day began at Černá hora (Black Mountain in Czech) at the edge of popular spa town Jánske lázně. Zina Plchová, in charge of media and marketing for the operator, was kind enough to show us around so we would know what to expect.

“Right now we are at the top of Černá hora in the eastern Krkonoše Mountains. This hill is a cornerstone of the Černá hora – Pec resort, the largest of its kind in Czechia, offering 44 kilometres of trails. The resort is actually five hills which are all connected either by 12 ski bus routes or by our fleet of tracked vehicles.

“In practice, can start your day here at Černá hora, ski, and later take a tracked vehicle over to Pec pod Snežkou for a total of 30 kilometres of available and well-groomed runs.”

Tracked vehicles are a constant near the top of the mountain, arriving every fifteen minutes. They can transport 20 passengers at a time and drop you at the head of the second resort, for you to ski down. Ms Plchová again:

“Traditionally, Černá hora sees the first skiing of the season and also often the last.”

“It’s fair to say that we want to compete or offer an alternative to mid- to large-sized resorts in Austria. Our hills are not as high as the Alps, of course, but they are among the highest in Czechia. Traditionally, Černá hora begins operation the earliest of all hills every season. It is also one of the last places still being skied at when warm weather arrives.”

Ski Resort Černá hora - Pec sees around a million visitors a year, with around three- quarters of visitors coming for winter sports and activities and the rest coming in the spring or summer, she confirmed. Visitors can ski or likewise toboggan on the oldest sledding run in the Krkonoše Mountains.

“Any visit should include trying the sled run. Some of you will be skiing today and others are going on the sleds. The run has a history which goes back more than 100 years. Originally the trail was used to collect and transport wood and hay.

Photo: Ondřej Tomšů
“A lot of people probably won’t know that sledding pre-dated skiing at Černá hora and Jánské lázně. There was a tow here in 1913 which took sledders up for a one-kilometre run. Three years later, however, the copper wire which was used to take them up was taken down for the war effort.

“In later years, skiing became more popular but sledding has a special place here and we still organise night sledding for families, for example, where sledders go up on the day’s last cable car with a guide to come down in the dark, equipped with headlamps. It is a really great experience.

“During the day, you can ski, you can have something at the Apres Ski bar here on top of the mountain and in the late afternoon you can sled. Alternatively, if you head over to Pec, you can go on walking tours or, weather permitting, take the cable car to visit the Czech tallest mountain, Snežka.”

First on the agenda, on our day at least for some of us was skiing at Černá hora, a run entitled Anděl (Angel). 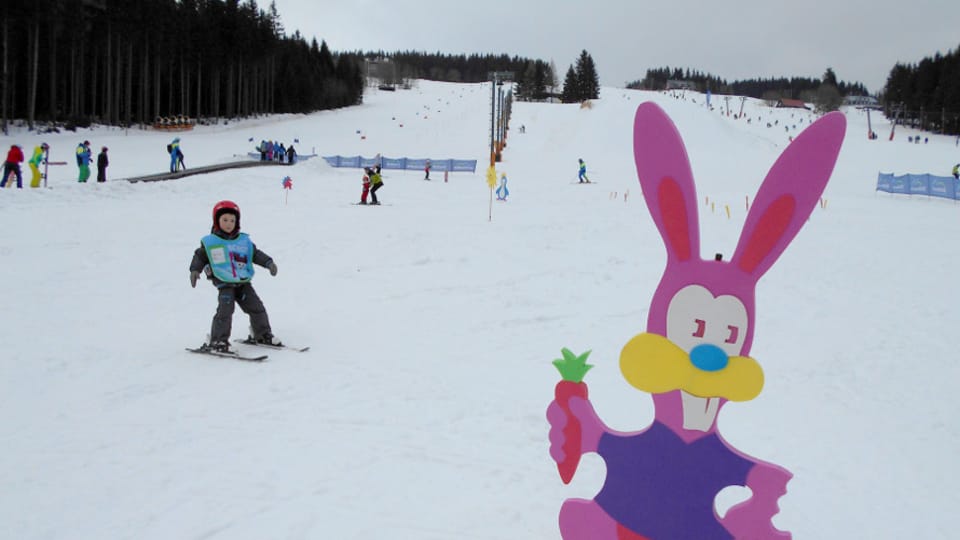 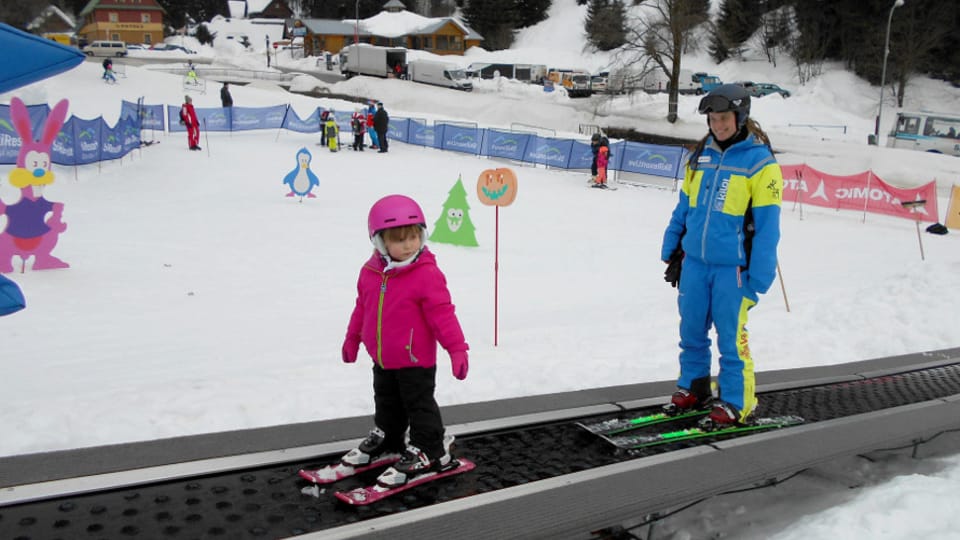 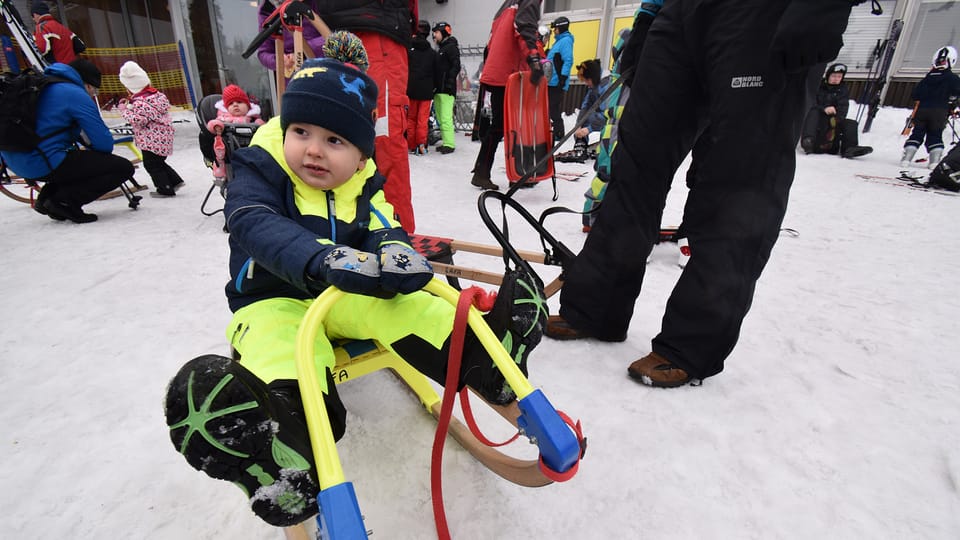 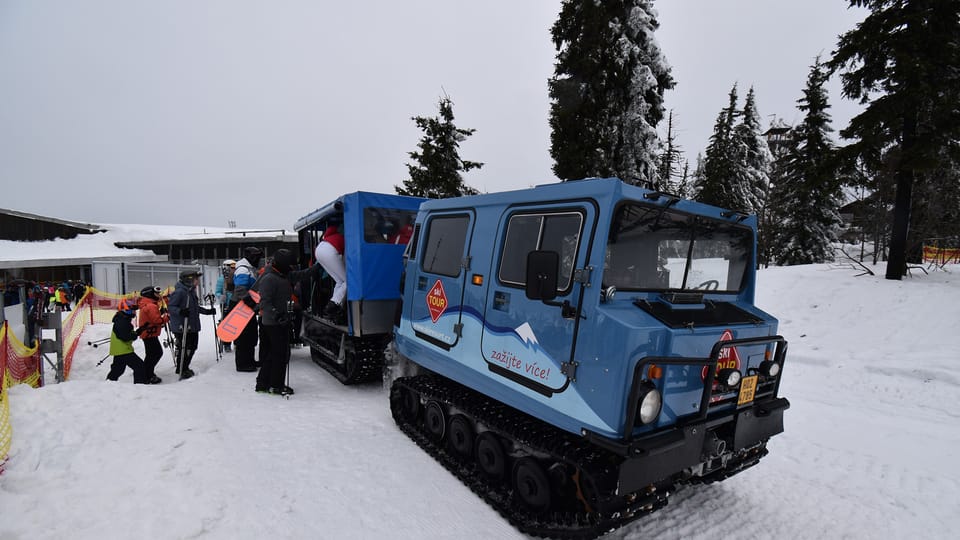 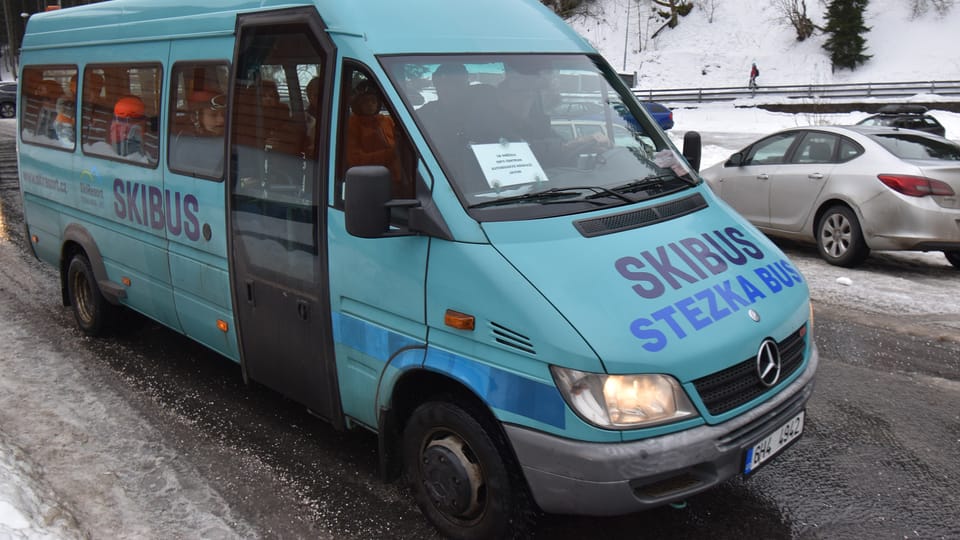 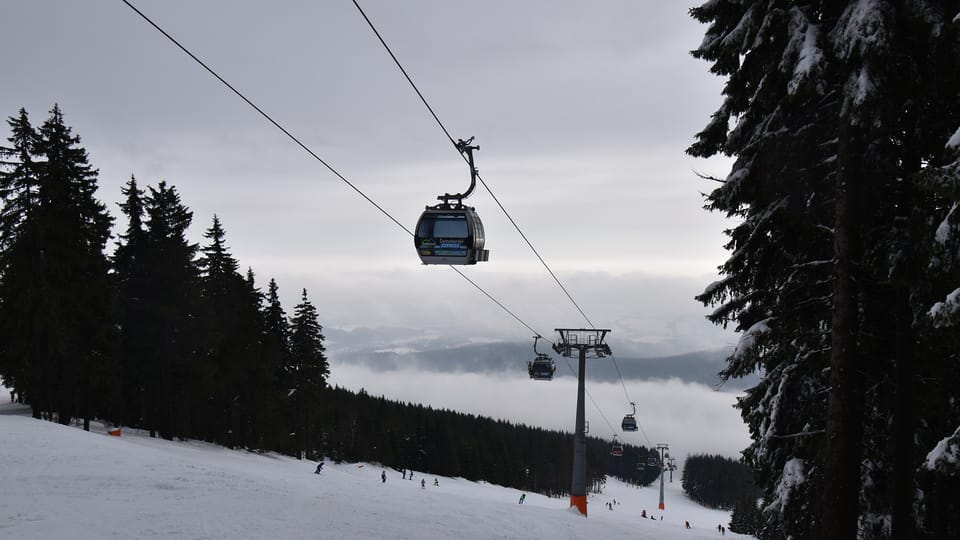 We spend the morning skiing at Černá hora; although it is a Thursday, the mountain is quite busy. Ski schools are out in force with smaller children as well as teens; the lines aren’t two bad on the upper half of the slope. Because the weather is warm, we decide to ski the top half rather than the bottom where the snow is heavier and the waiting lines a longer.

Speaking of lines, a fair number of people at the top of the peak have been waiting for track vehicles take them to Pec. The group has grown too large to be dispatched quickly. Some say they have waited too long, other, that is it not as bad as it appears. One outspoken skier, who gives his name as Radim, says he and his family should have stayed on one of the smaller hills.

“If you come to Černá hora and Pec pod Snežkou you can’t just ski but should also sled.”

“We were skiing on Úpa earlier and there were fewer people. But we wanted to come here because of how nice it is. But at Černá hora we ended up getting only two runs in. I’ll put it this way, there are just a lot of people on the slopes today.”

Anyone who has a ski week or skied for years, know things can be different from one day to the next and it’s true that sometimes factors can combine to complicate or even mar a ski day even at the best of hills. The character is set by the weather, the number of visitors, visibility, snow quality and sometimes just overall mood.

Conditions can also change quickly or vary from site to site, as I find at Pec pod Snežkou, where the mood on this day is more laid back, despite a slalom race being organised for juniors.

More than a few people tell us they are glad they had been able to escape to the mountains- some travelling from hundreds of kilometres away to be here in Pec pod Snežkou.

Young man: “We came for the skiing and we’ve had a look around and gotten a feel of the runs. It’s quite warm, hopefully the snow won’t melt.”

Man with girlfriend: “I have to admit that we are in Pec for the first time. It has been a little warm: four or five degrees above zero is pretty mild for January. But it is supposed to get colder starting tomorrow.”

Polish father: “We are from Poland and we are here for a ski vacation.”

Alan Tomášek, photo: Ondřej Tomšů
So it is fairly close by for you.

“Well actually not really. We are from the north of the country near the Baltic Sea about 600 kilometres away. But if we want to ski, this is the closest destination. We are glad that we came here today; yesterday was worse.”

You ride a snowboard, you’re not skiing… which is better?

Clicking out of the skis and walking into the town of Pec pod Snežkou, population of 600, you can see many parked cars, few of which probably belong to locals. It is easy to understand why the town has been looking into ways to push cars out of the centre and more onto the periphery, through Park and Ride systems. Mayor Alan Tomášek:

“The ski resort business is a huge thing for the people of this town. It is a major factor in the local economy, providing employment and opportunities for the service sector, especially for accommodation. Both winter and summer are heavy seasons when it comes to visitors. In the summer, in some ways it is more intense on nature because people come to hike and go on tours and so on. So that is something we have to consider and balance out. But I am thrilled Czechs are coming back to - and enjoying - the mountains.

“Czechs are coming back to the mountains and we’re happy to see it.”

“Our key upcoming projects, within two years, are to find better parking solutions. I am not a fan of large parking areas in the middle of the mountains, and even having cars everywhere in the city centre is nothing nice. So we are looking into solutions which would make it easy for visitors to park further out. We are talking about space for 370 cars.”

Near the ski hill again, snowmobile or other tracked vehicles zips by. As the mayor says, this is a town which lives and breathes winter sport, as Pepa, owner of the aptly named Pepa Sports confirms. His shop rents everything from ski equipment and snowshoes to fat bikes and electronic fat bikes, capable of chewing up the snow, and in the summer, the dirt. He talked specifically about how electric bikes were a game-changer.

“Even those who are diehard mountain bikers and resisted electric bikes until the last minute, changed their mind. The great thing about the electric fat bike is that it levels the playing field between riders. Less fit riders can switch to electric on hard climbs and still share the experience; so even those who were against changed their minds immediately after they tried it.”

We tried the bike too, for the first time and can confirm he is right. The next time we report from the mountains, in won’t be on skis but perhaps in the saddle on some fine single-track.