The once picturesque village of Libkovice lay nestled in a small valley not far from the hilltop where legend has it the primal Father Čech decided his people would settle in Bohemian. Founded nearly a millennium ago, Libkovice was the last town slated for liquidation after 1989 to make way for coal mining operations. Its residents, together with environmental activists faced off against freshly minted capitalists in an ultimately futile battle to save the village, which lay above a rich seam of coal. But the sad story has one silver lining: the destruction allowed for an altogether different kind of excavation – archaeological “rescue digs” – which unearthed a treasure trove of information about life in a human settlement in Europe spanning a millennium.

Libkovice, photo: Public Domain
Czechoslovak Television news report (1991): “A rather nice looking village at first glance, with lots of greenery and a picturesque church, Libkovice’s days, perhaps even hours, are numbered. It will soon join others forced to give way to coal mining, which is not unusual in the region...”

More than a hundred villages and towns in north-western Bohemia were razed by the former Communist regime in the second half of the 20th century. In their place, are brown coal mines and quarries that pockmark the landscape. Some residents in the greater region of Most were compelled to move several times in their lives as mining expanded.

“… Of the thousands who once lived here in Libkovice, only about 200 people remain. Most houses are abandoned and crumbling. And the residents? A handful moved to surrounding villages, which might survive. Others now live in the paneláky (prefabricated apartment blocks) in the city of Most.”

Libkovice was already marked in the 1970s for possible demolition, as it was known to sit atop a rich coal seam. Official word on the village’s fate came in 1987 – one year after this Czech-Germanic village celebrated its 800th birthday.

Powerlessness of the People

The fall of Communism gave some hope to the 70-odd families living in Libkovice that the decision to raze the village could be reversed. But in an early post-Velvet Revolution test of the “power of the powerless”, to borrow Václav Havel’s phrase, Libkovice’s residents fought in vain to save their homes – this despite denunciation of the liquidations from the dissident playwright turned president himself.

A já jsem myslel, že spletl jsem silnici
A místo do města, dojel jsem k věznici
K velkému táboru, kde lidé pykají
Za to, že člověku, bratru ubližují
I thought I’d mistaken the road.
Instead of a town, I came to a prison.
To a big camp, with people burning,
For having harmed a brother.

So go the lyrics to “Litvínov” by the beloved Czech folk singer-songwriter Jaroslav Hutka, a Charter 77 signatory hounded into spending two decades in exile (who returned days into the Velvet Revolution, and sang to a staggering crowd of 800,000 at Prague’s Letná Plain).

Excavations in Libkovice, photo: Frederik Velinský / Czech Radio
Hutka lent his voice to the effort to save Libkovice, as documented in a Czech Television film from 1994 called Hnědouhelný teror (Brown Coal Terror):

“I wrote the song ‘Litvínov’ more than twenty years ago, and of course much has since changed for the better… but in our democracy, borders are still encroaching on basic human rights.”

Ironically, it was another former dissident, Zdeněk Stružka, who had revived the Communist-era scheme to liquidate Libkovice. A professed environmentalist, he had become director of state-run miner Doly Hlubina, which was eager to extract the village’s coal and find a foreign suitor willing to privatize it.

Asked in 1999 why the village had to be razed, Stružka said it was in fact impossible to save, in the long run. Decades of digging and drilling and obstructing subterranean geologies around Libkovice, he says, had bequeathed it an unstable substrata, akin to quicksand.

“Libkovice had to be liquidated due to its unfortunate location. It was absolutely the last village in the entire review of the SHD [Northern Bohemian Brown Coal Mines region] built on ground with a lot of clay, horizontal layers of sand, which have long been sinking… It is unstable, also because of mining that took place up to its borders in the past century.”

On a Wing and a Prayer

Church of St. Michael in Libkovice in 1998, photo: Nadkachna, CC BY 3.0
The liquidation of Libkovice was carried out in stages from 1991 through 1993 despite major protests and blockades by residents and environmental activists from Greenpeace, Hnutí Duha and other groups, keen to ween the nation off of dirty coal power. The case provoked a debate on employing mining methods that make it possible to preserve the landscape – and people’s homes.

When the dust settled, just over a dozen houses were left standing in Libkovice. So too was the Church of St. Michael – up until August 2002, when private miner Mostecká uhelná, which had promised to preserve it, tore it down. Virtually no one was left to object to its demolition.

Among the few families remaining in the village was that of Petr Šmídl. He recalls how the army and police liked to conduct drills among its ruins.

“A MiG-15 jet fighter was installed in the village. I think it was part of the childhood of every kid from Libkovice. We’d climb into the pilot’s cabin, slide on the wings. We just fooled around there all the time.”

The bitter irony is that no coal mining whatsoever was carried out beneath Libkovice – brown coal mining limits set in 1991 had in fact extended into the area, preventing excavation without a legal battle.

That changed after 2015, when restrictions affecting the razed village were lifted at the request of Severočeské doly, a mining unit of state-controlled utility ČEZ. Surface mining there could continue until 2030, says company spokesman Lukáš Kopecký, starting with open-cast mining to remove sand and clay covering a coal seam roughly 4 kilometres long and 30 metres deep. 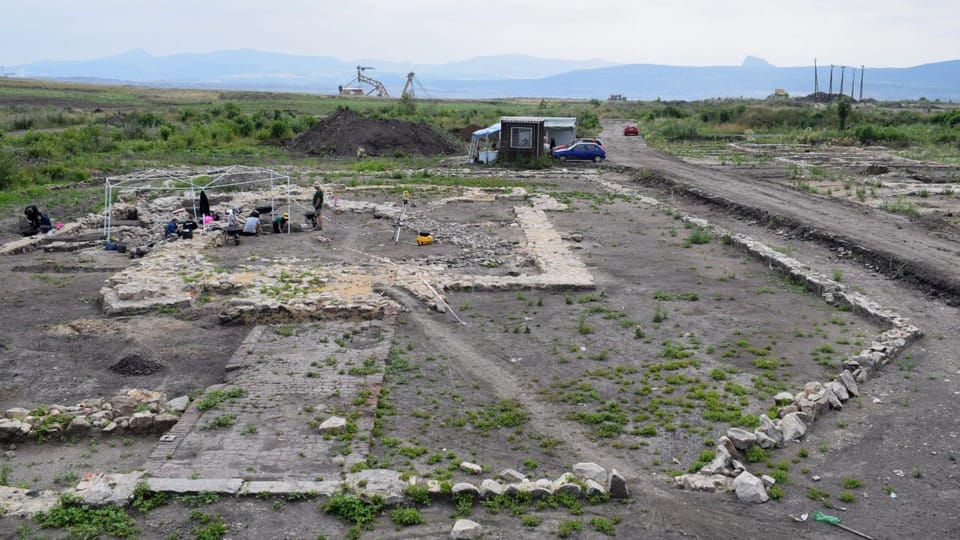 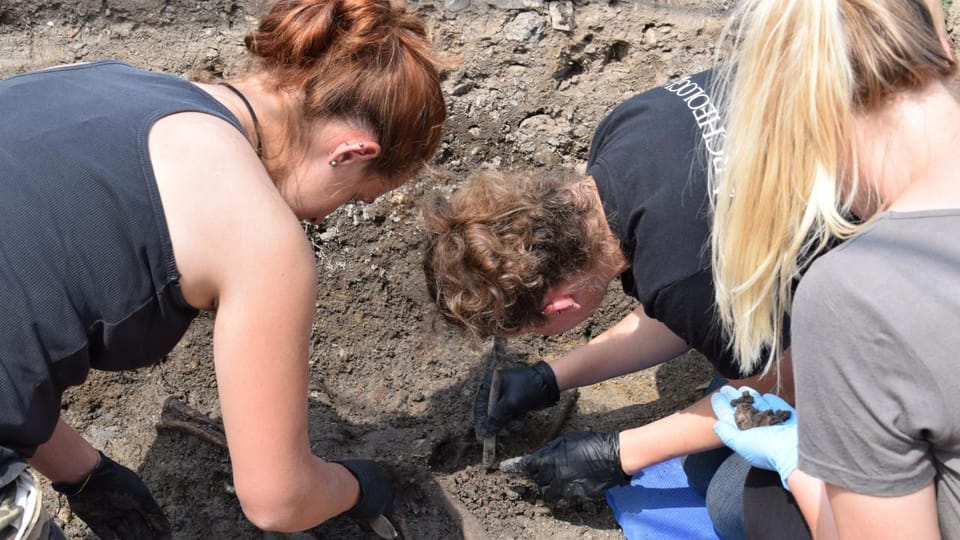 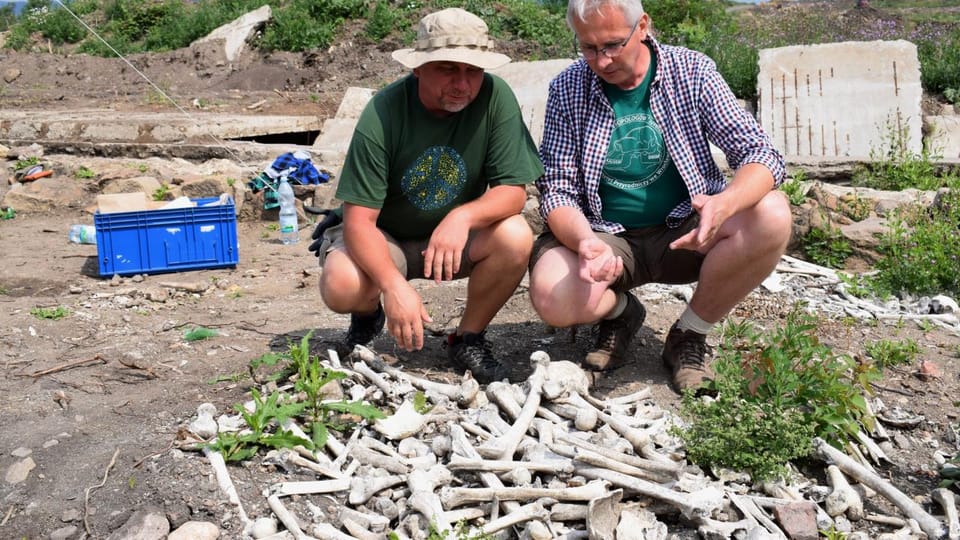 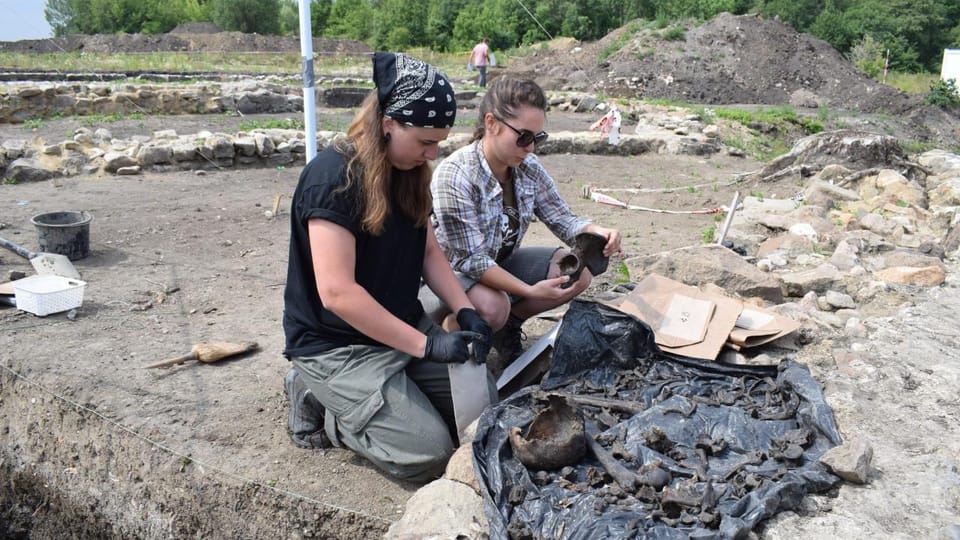 A ‘rescue excavation’ of Libkovice

Insensitive construction work worldwide has destroyed priceless relics and monuments. In some cases, Czech “rescue” excavations as they are called – where significant archaeological finds objects are preserved before diggers move in – have unearthed entire Neolithic and Bronze Ages villages.

Rescue excavations usually cover only a fragment of a cemetery – often urban cemeteries at a construction site. But in the Middle Ages and early modern period, of course, most Europeans lived in the countryside.

Libkovice, a village occupied for over 800 years, has a layout, roads and squares of medieval origin. So, the possibility of studying an entire untouched rural cemetery, used from the turn of the 13th century until the 18th century, is a scientific sensation on a European scale – it is exceptionally rare to be able to trace the development of a community from its earliest settlement until its disappearance.

“Part of the church graveyard was exhumed, and the remains of people buried here in the 20th century were reinterned in cemeteries nearby. But the graves of people who lived here from the 13th century up through the 20th century, including Germans, are still here.

“We’re thrilled to be working with anthropologists from the University of Wrocław who have tremendous experience with burial sites. There are 1,000 graves to exhume and examine, and not much time. So the Polish anthropologists are a great help to us archaeologists. They have expertise that we don’t.”

In a few years, the final remnants of Libkovice will likely be destroyed when a new Severočeské doly brown coal mine is in fact dug. In the meantime, Czech researchers are coordinating summertime rescue digs including archaeologists and anthropologists from Poland, the Netherlands, Kyrgyzstan and Finland.

The destruction of the village – as tragic as it was for the families who lived there – has at least one silver lining. Its razing has allowed for a comprehensive in situ study of human settlements spanning a millennium.

The cadastre of Libkovice has been systematically studied off and on by archaeologists since the 1970s. Before the initial razing of the village of Libkovice in the early 1990s, care was taken to exhume human remains – the skeletons of victims of two totalitarian regimes.
On the outskirts of the village was a glassworks which during World War II the Nazis converted into a prison camp. Allied prisoners of war – Polish, Belgian and French, and Red Army soldiers – were buried in a mass grave there.
After the war, the Nazi prison camp became a holding pen for ethnic Germans before they were expelled from the country. Czech communists turned it into a Stalinist-era gulag, where political prisoners were buried in the 1950s.