Make those rotten products look good! The hypermarket chain store that risked consumers health by selling old meat and salamis. A Czech town builds a 10,000 euro bridge for squirrels. And, who has got the fastest steam engine? The Czech Republic has won the Steam Engine Grand Prix. Find out more in Magazine with Daniela Lazarova.

A Czech town has built a 10,000 euro /12,000 dollar/ bridge to protect a handful of squirrels from a busy road, without even knowing whether they would use it. The mayor of Sokolov, the town in question, said people had reported seeing dead squirrels on the busy road and he himself had found two. I felt it was high time to do something, Karel Jakobec said. The result is a construction that is believed to be unique in the world - a seven metre /23 foot/ high cable bridge attached to two trees now spans the road dividing a large park. The idea is that instead of going down trees and crossing the road to get to the other side of the park the squirrels will go up and across - but we don't really know if it will work, Jakobec said. The town has already arranged for more squirrels to be brought to the area from an animal rescue center and hopes that the squirrel population in the park will grow. It's an idea that the locals have welcomed. The only thing that has left many people shaking their heads in disbelief is how a cable bridge attached to two trees could have cost 10,000 euros. The bulk of the financing was provided by the Staropramen Brewery as one of ten grants it awarded for ecological projects. The rest was put up by the town council. The past week has revealed horrific practices at some supermarket chains. First food inspectors closed down a hypermarket run by the Dutch chain Ahold because the store was infested with mice. We found a lot of mouse droppings, chewed groceries and mice both dead and alive on the floor -one of the inspectors said. Ahold now faces a fine of several hundred thousand crowns -or tens of thousands of euros. Before shoppers had recovered from this news - inspectors discovered that the Julius Meinl supermarket chain was selling rotten food. When products such as ham and salami were way over their pass by date a Meinl store in Ceske Budejovice would simply have them taken to a back room and washed in salt and vinegar to cover up the signs that the food was going bad. Saleswomen said they were then ordered to grease some of the products with oil so that they would appear to be fresh. Inspectors found the store selling salami the pass-by date of which was originally May of this year. "When the mould was visible on a product we had to cut those bits off and put it back on sale," said a salesgirl who no longer works for the store. The shock revelations have resulted in a crack-down on food stores across the country and Czech consumers are now studying the products they buy very carefully indeed.

Matej Lehar from the town of Pardubice is a perfectly normal fourteen year old -interested in computers, girls and football. There's just one thing that makes him special - he has six fingers on his right hand, all of them perfectly formed and fully functional. It not something that people normally notice, Matej says and in many ways he sees it as an advantage - he works faster on the computer, finds it easier to play musical instruments and says he handles things better. The only disadvantage really is when it comes to buying gloves. So his grandmother just knits them for him. Matej's mother says that nobody in the maternity hospital noticed that her son had six fingers and neither did she. It was only when she brought him home and let his elder brother play with him that he ran into the kitchen and said "Mom, Matej's got SIX fingers!" I didn't believe him of course, Matej's mother admits, in fact I made him go back and count three more times before I went to check for myself - and he was right!

Photo: CTK
Twenty thousand people attended the wine harvesting celebrations in and around Karlstejn Castle last weekend. There was plenty of young wine called "burcak", and tables groaned under the weight of good food as befits a celebration presided over by Emperor Charles IV and his court. The royal procession arrived on horseback in period costumes and when the cameras stopped clicking they sat back to enjoy the performances of fencers, jesters, musicians and magicians who were there to amuse the company throughout the two days. 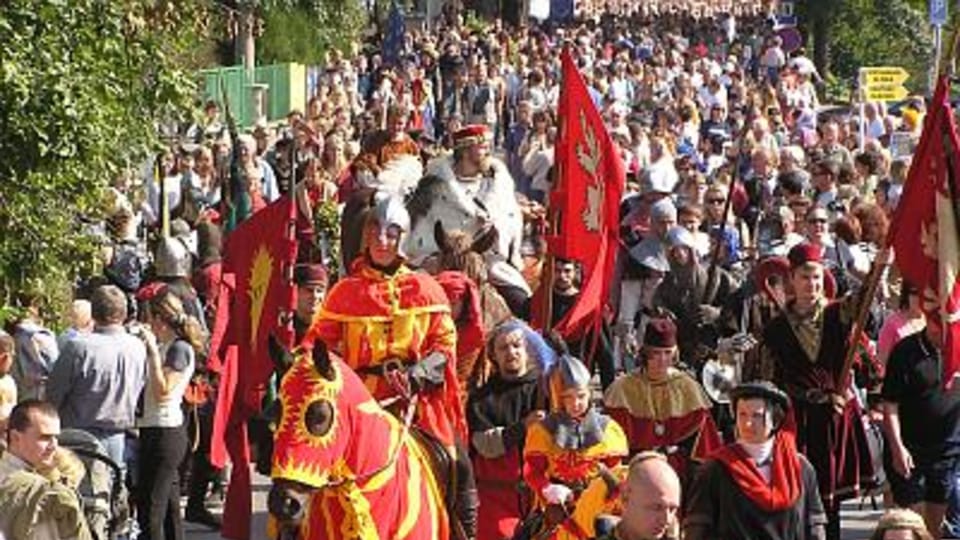 Viteslav Jandak, photo: CTK
Culture minister Viteslav Jandak says he wants to build an old age home for artists. The minister who refuses to have a spokesman, saying that he was well able to communicate with the media himself, unveiled the plan in the course of a TV debate last week. Himself an actor, Jandak said he had seen many famous Czech actors who had been stars in their hey-day spend their last years alone and in dire poverty. The minister said that actors aged differently from other people who simply took up hobbies to fill their time with. Actors lived their lives on stage and when they were no longer needed or wanted - they had a harder time finding a new purpose in life. According to the minister the old age home for artists could be planned and decorated by artists and once filled - its inhabitants could put together an ensemble and continue acting for the sheer joy of it. They could travel around other pension homes or put on a performance for whoever was interested.

The Czech Republic is the winner of The Steam Engine Grand Prix which took place in the Hungarian capital Budapest on September 18th. Steam engines huffed and puffed around the track as the crowd admired the freshly renovated old locomotives. Steam engines from across Europe competed in several disciplines - how smoothly they could start off, gather speed, how fast they could go and how quickly they could stop at short notice. Hooting was of course of equal importance. Nothing like a few well pitched hoots as the steam loco sets on its way. Czech engine driver Miroslav Svozil driving the Rosnicka at a maximum speed of 90 km per hour won not just the Grandprix but the admiration of hundreds of visitors who came to watch the unusual contest. She may be ancient, but Miroslav says, Rosnicka is simply the love of his life.