Czechs re-enact the coronation of Emperor Charles IV. Baby Methusaleh comes to Prague! And - a young man seems to have started a pink bike craze in the Czech capital! Find out more in Magazine with Daniela Lazarova.

Prague witnessed an impressive sight this week - a historic procession marking the 651st anniversary of the coronation of Emperor Charles IV. The procession was led by Charles IV with his royal consort Queen Anna followed by the royal household, courtiers and commoners - over three hundred people in all. The coronation procession went from Vysehrad through Charles Square, Celetna Street past the Town Hall, over Charles Bridge and up to the Castle. On Old Town Square the Emperor was greeted by Prague Mayor Pavel Bem with all his councilors in attendance, all in costumes borrowed from the National Theatre. Evil tongues say the Emperor had a bone to pick with his subject - saying "What's this I hear about you renting my bridge for a dubious event? A grave mistake - the councilors responsible will be executed Your Majesty" the mayor is said to have replied, bowing low before his king. In good humour, the Emperor let it pass and made his way to the Castle where he was welcomed by Cardinal Miloslav Vlk, royally fed and lavishly entertained by dancers, jesters and musicians.

Caught up in the mood of the celebrations a Czech couple decided to marry in historic costume - although there were no restrictions placed on what part of the world or period the costumes came from. As a result the wedding party was a sight to behold - the groom wearing the costume of a Roman soldier, the bride a tunic. They rubbed shoulders with Cleopatra, Henry VIII and Madame Pompadour - among others. "It was my son's idea - and it was definitely the merriest wedding I've ever attended," the groom's mother said.

Elsewhere fans of the Good Soldier Schweik were enjoying their annual Pisek-to-Putim tour - a distance that the good soldier Schweik covers on foot in Jaroslav Hasek's famous novel. In Putim, Schweik shook hands with the grandson of his creator - Richard Hasek. He then grabbed the mic and kept the audience in fits of laughter all afternoon. "If Schweik were alive today he would give our politicians a piece of his mind - it's a pity he isn't," Radko Pytlik, the country's leading literary expert on Hasek, told journalists.

Meanwhile Porsche owners and fans have been celebrating the 132nd anniversary of the birth of Ferdinand Porsche in the town of Vratislavice, now on Czech territory - then part of the Austro-Hungarian Empire. Porsche worked on the construction of the first automobiles produced in the Austro-Hungarian Empire and after the First World War he and his son launched their own enterprise - starting a long line of Porsches. The townspeople are immensely proud of the link and the anniversary of Porsche's birth is celebrated annually with a get together of Porsche owners - ranging from veterans to the latest sports models. "It is our way of saying thank you for the best car ever constructed" - said the chairman of the Porsche Club Milan Bumba. He recalled that he had initiated a Porsche get together back in 1985 and subsequently spent hours being cross examined by the communist secret police, who wanted to know why he was advocating a foreign car and who was paying him to do it.

Mr. Vetvicka with the offspring of Methuselah, photo: Zdenek Valis
The Botanical Gardens of Prague's Charles University now boast an immense treasure - an offspring of the world's oldest trees known as Methuselah. Methuselah - a 4, 768 year old bristlecone pine - grows at a secret location in the White Mountains, in Inyo County, in the USA. Botanist David Milarch has been given permission to "clone" Methuselah by taking cuttings and grafting new offspring. He has so far managed to graft ten 3-inch bristly green offspring - nine are in various parts of the United States and one has been donated to the Prague Botanical Gardens. The director himself - aptly named Pan Vetvicka, or Mr. Tree Branch - planted the newcomer as botanists and journalists pressed around him. "We are immensely proud of this privilege and we shall take good care of this baby," Mr. Vetvicka promised. The tiny Methuselah is now living happily in a glasshouse with some American cacti - as soon as it gets bigger it will be replanted out in the open. And maybe in some 4, 000 years' time someone else at Radio Prague will report on its progress.

It was the dream of every teenager back in the communist 1950s: the Jawa 550 Pioneer motorbike. Dubbed Parez, the Jawa Pioneer was a small one-seat motorcycle with a cylinder capacity of 49,9 ccm (output 1,2 kW) a three-gear, foot-operated gearbox and reached a speed of 45 km/h. The frame of the motorcycle was made of a tubular profile and the front wheel was suspended in a telescopic fork. In the 1950s it cost around two thousand Czech crowns. People often advertise to buy one of these veterans. But now the famous motorbike is back. A replica of the Pioneer is being sold - in a limited series - on the Czech market. "It is not a renaissance and we don't expect to make a huge profit - its just a bit of nostalgia for older clients" the head of Motoscoot, Milan Veces told journalists at a promotion event for the New Pioneer. Within 24 hours 140 of them were sold or reserved. Although the New Pioneer bears a striking resemblance to the original - it movers with the times: powered by a four stroke Honda engine, four gears and an electric starter.

A Czech man has painted his bicycle a bright pink colour after having his previous four bikes stolen - and he says the shocking pink colour works better than any lock and key when it comes to keeping thieves away. Thirty year old Michal Krivohlavek who rides his bike to work every day says his patience ran thin when he has four bikes stolen within five years. "I figured a really crazy bike would be harder to sell so I bought a can of pink and gave it several coats. Now I look like a nut case but I can leave my bike anywhere - I just prop it up against a wall and I always find it there when I get back. I've also noticed other unexpected benefits - Michal says - I am much safer on the road nowadays because cars slow down when they pass me. Drivers can't resist taking a closer look to see who the loony on the pink bike is." However he may not have that advantage for long - many cyclists love the idea of spray painting their bike pink and they've planned a mass spray -painting event in Prague on September 17th. 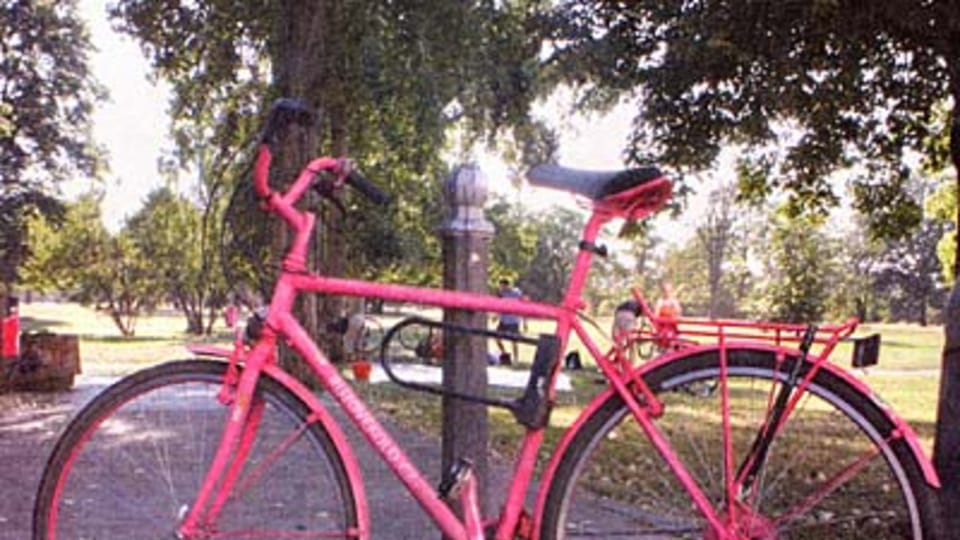