Czech firefighters win the gold medal at the World Firefighters' Games in Adelaide. Czechs develop a taste for exotic food. And, the Pub of the Year Award goes to....Tramway! Find out more in Magazine with Daniela Lazarova.

If you want to start a business in Prague then I have a tip for you - exotic restaurants are in fashion and there's not enough of them to meet demand. Wealthy Czechs have discovered the pleasures of tiger shrimps in Oriental sauce and mussels in martini. There are now about three hundred exotic food restaurants in Prague - mostly offering Indian, Japanese and Thai specialties. But, according to market experts, there's still room for more. Czechs now travel the world and having tasted Mongolian and Malaysian food they would appreciate being able savour the experience at home. Although the prices in these restaurants are not for someone with an average salary they never lack clients. Czech and foreign businesspeople in Prague like to do business over lunch and dinner at these fashionable restaurants and for those who can easily afford it - it's the place to be seen. "Czechs are very open to new food experiences," says Prague-based Japanese businessman Tomio Okamura, who likes to do business over a gourmet meal. So is there anyone left for pork and dumplings? Foreign visitors, apparently. According to the head of the Prague information centre, foreigners who visit Prague want to taste traditional Czech food. What are the typical Czech specialties and where can we get them - are reportedly the most frequently asked questions. But then who would come to Prague to eat mussels?

Most Czechs have their favourite brand of beer - and would explain to you in great detail why a particular brew is better than any other. But few people know about the beer and cordials made at Czech convents. "Pray and work" is the motto of the St. Benedict Convent and that is exactly what the monks and nuns do, making beer, cordials and syrups according to centuries' old secret recipes. The money they make is spent on the maintenance of their convent and on charity. Before they would offer their goods to selected salesmen but now their products have a better outlet. A Moravian businesswoman has opened the first specialized convent goods store in the Czech Republic. It is in Brno and is kept well supplied not only by Czech convents but also by well known foreign ones. You can buy things like fig marmalade with port or the famous La Trappe beer from the French Monastery Notre Dame de Sept-Fons. "La Trappe beer is only made in seven monasteries around the world and we get deliveries from six of them" the owner says proudly. So - if you want beer with a blessing - you'll know where to go.

Any pub-goer will tell you that a good pub needs to have "character". And pub owners often put in a lot of work getting the interior décor right. Some build their image around a well known personality who frequented it - such as Bohumil Hrabal, others have a mascot or create an atmosphere reminiscent of the communist years or the first republic. The pub that won the 2006 Pub of the Year Competition creates the illusion of a tram - one of the vintage models that made the rounds in the 1950s. There is even a tram bell over the bar - just in case the waiter is not looking your way. But regulars say the service is excellent, the food is great and the company is such that you don't want to go home to your wife. The Tramway Pub, as it is called, has to be good - it was one of 50 pubs nominated and won hands down. And, if you are still not convinced, the owner will proudly show you a picture of President Klaus enjoying a pint there with the mayor of Prague 4. And he certainly seems to be having a good time. 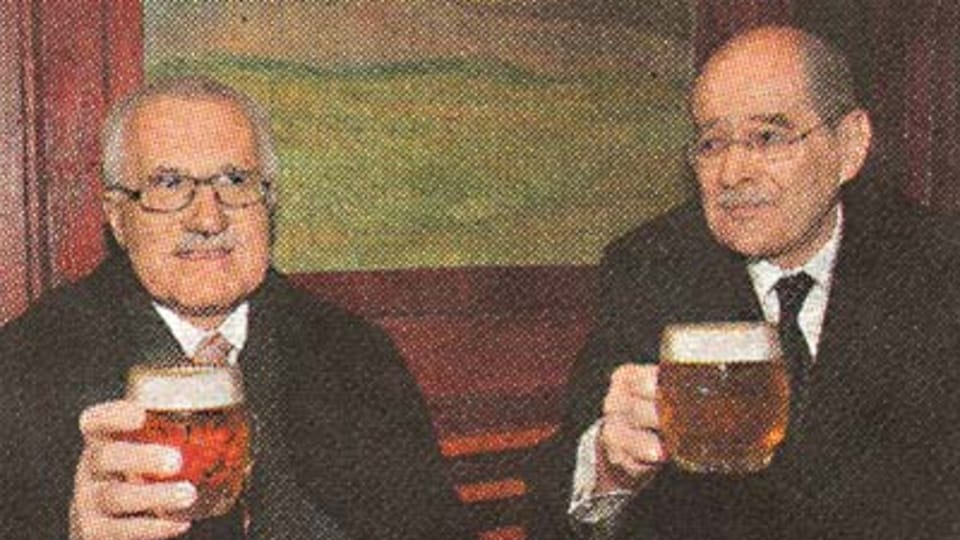 A four-member Czech firefighting team has just won the gold medal at the 12th World Firefighters' Games in Adelaide, Australia - something like the Olympic Games for firemen. The annual competition is attended by the cream of the crop from around the world and the games simulate real-life situations that are a grueling test of strength and endurance - such as tunnel crawling, a two kilometer run with a 20-kilo backpack and a 21-floor stair climb wearing breathing apparatus. The Czech heroes were given an enthusiastic welcome on their return home. A fire is not something you ever want to experience -but it's comforting to know that our boys are the best!

When you are a teacher of Russian at a Brno secondary school you don't admit to having an extensive condom collection. Frantisek Zvacka kept his hobby a secret for years, fearing he would be labeled a pervert and sacked. But after the revolution things loosened up and Frantisek Zvacka published an article on the history of condoms in one of the local dailies. Now his students bring back a condom for him from wherever they happen to be holidaying. He currently has two and a half thousand condoms and condom wrappers from around the world including a glowing condom, a condom that plays a wedding march and condoms with the faces of leading world celebrities and politicians. And recently he expanded his collection to include condom ads from the beginning of the 20th century. He is now a member of the Czech collectors' club and the proud owner of the Most Noteworthy Collection Award. Some of the information that Frantisek Zvacka has collected on condoms is noteworthy indeed - apparently the very first references to condoms date back to ancient Egypt but they did not serve the purpose they do today - the sheath allegedly protected Egyptian males from painful insect bites. As for contraception they had something far more effective - Egyptian women made their own concoctions from crocodile excrement and sour milk.