More and more Czechs are taking up slacklining. A woman is in big trouble after attempting to smuggle three banana plants to Australia in her undies! And, a spooky dinner – why are those chicken bones shining in the dark?! Find out more in Magazine with Daniela Lazarová.

Czech anglers are green with envy. This autumn’s record catch has gone to a woman – 38-year-old Anna Balounová - who last week pulled a prize huchen from the Otava river in southern Bohemia. This species of freshwater fish is the biggest in the salmon family and although it was once plentiful in Central Europe it is rarely seen nowadays. Anglers catch two to three specimen a year. Certainly no one in the country can boast a catch of this size – the huchen was 1 meter 22 centimeters long and weighed 15 kilos. Although Anna first started fishing with her father at the age of two she says she has never come across a huchen in her life and was shaking at the knees when after a half hours struggle she finally managed to reel it to the river bank.

A Czech family who dined on roast chicken this week was somewhat shocked to discover that the chicken bones which they took out to the dog late that evening shone a luminous green in the darkness. The spooky bones have been turned over to the hygiene office which is conducting tests, but the family was assured that the meat they had consumed was not in any way a health hazard. When the news was aired on commercial TV Nova this week several people working at poultry farms said they were not unaware of the problem and claimed it was the result of antibiotics which chickens were fed in order to get them to put on weight faster. Well, luminous chicken bones may be great for Halloween, but I think I’ll start buying bio chickens as of now. 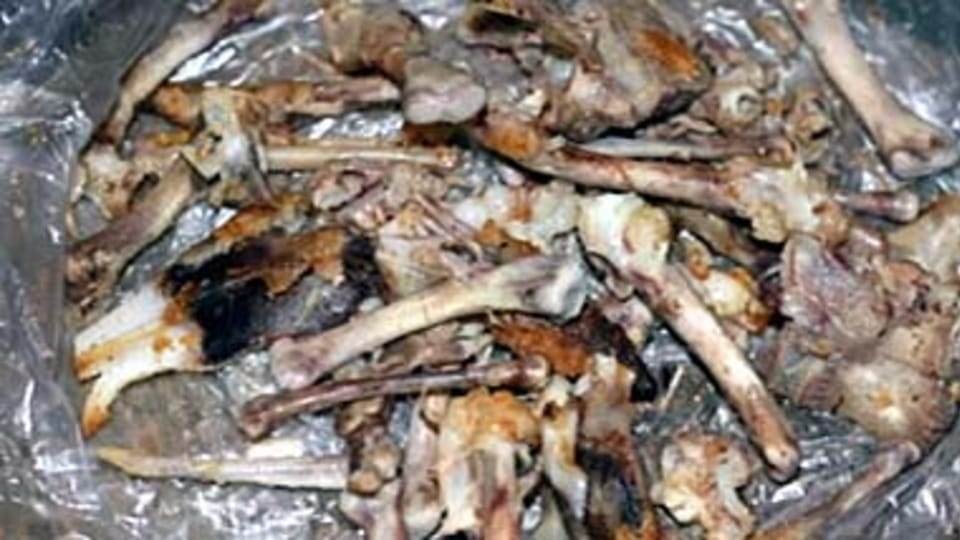 A two-year-old beagle called Jack has just proved that not only cats have nine lives. Jack likes to wonder about and occasionally gives his owners the slip. Last week he decided to leave the flat through the bedroom window – located in the second storey of a block of flats. Mercifully he landed on all fours and a visit to the vet confirmed that there wasn’t a scratch on him. The vet said he could thank the fact that he was in great shape, but he has advised Jack’s owners to keep their windows closed in the future.

Czech schoolchildren are increasingly affected by the advance of modern technology. Their style and spelling suffers as a result of abbreviations in SMS messages which have become second nature and increasingly the use of computers is making it harder for them to learn to write by hand. Whereas in the past everything was handwritten and schools placed great emphasis on penmanship – the quality and style of handwriting – today they are thinking about easing the norms in this respect. A new handwriting technique for first graders is now being tested in one class in the Czech Republic. Instead of the old loops and twirls and obligatory slant, the new way of forming letters has a closer resemblance to forming block capitals and the letters of one word need not be written in one uninterrupted motion of the hand. This is not only easier to master but helps children not to forget diacritics. Before they were taught to write a word in one flowing motion and only then dot their I’ s and cross their T s, which often led to their forgetting to do so. However this new style of penmanship is only in its nappies. If it goes down well in this one class then it may be introduced across the country. For the time being Czech students are still labouring over their handwriting very much as they did half a century ago. But with every passing year they are finding it harder and harder to master – and a handwritten letter is something that many of them have only ever heard about.

Ten years ago nobody knew what it was – now slacklining has a growing number of fans in the Czech Republic. The sport emerged in the 1970s in the United States and its name accurately describes the activity involved – basically it is like tightrope walking on a slack line, a line that it dynamic instead of being taunt, shifting and bouncing under one’s feet and making it extremely difficult to keep one’s balance. The two ends of the nylon webbing are stretched between two anchor points and the line’s tension can be adjusted to enable a variety of feats. The sport was first brought to Europe by the Austrian mountaineer Heinz Zak and it was his book Between the Earth and the Sky that sparked an interest in slacklining in the Czech Republic. Today there are some two hundred people practicing the sport, up from 50 last year and its popularity is spreading fast. The majority are lowliners, only about thirty of the best – usually professional mountaineers –engage in highlining, stretching their lines high above ground anchored to tall trees or mountain ridges. Forty year old Jiří Janoušek – who pioneered slacklining in the Czech Republic- says walking out on the line is a battle against one’s self-preservation instinct. He says that what attracts him to the sport most is that it is novel and nobody knows just yet where its boundaries end. At forty he may not be up there for very much longer but already kids are lowlining in gardens – ready to test those boundaries when the time comes.

Photo: Blueshade, Creative Commons 2.0
A 56-year-old Czech woman made headlines this week when Australian customs officers caught her trying to smuggle three live banana plants in her underpants. The woman had arrived from Samoa at Sydney Airport where an officer frisked her and found she had three suspicious looking bulges in her underwear. Quarantine officers have seized the plants and the woman is likely to be issued a court attendance notice when investigations are complete. Customs consider the plants a threat to Australia's banana industry because they can carry black sigatoka disease and the penalties for breaching quarantine laws can result in fines of more than 66 thousand dollars or 10 years in jail. Well, the woman may have had a bad day, but she certainly raised plenty of laughs - people have been cracking jokes about it from here to Sydney.
Author: Daniela Lazarová
tag:
run audio