Are you ashamed of your Prime Minister and want to tell the world? Try a "personalized" billboard! Who's the Czech champion in opening oysters? And, how do you attract more tourists to the Czech Republic? Give them an unforgettable wedding day! Find out more in Magazine with Daniela Lazarova.

Are you ashamed of your Prime Minister and want to tell the world? Come to us - says a Prague firm which is now making profit from the political scandal surrounding the Czech Prime Minister Stanislav Gross. People can grumble about him in pubs but some want to be more visible and so the firm is printing personalized billboards with the message "I'm ashamed of my Prime Minister" along with the name and photograph of the person who wished to express this sentiment. So far 30 Prague citizens have paid 3,000 crowns / 100 euros/ for this dubious pleasure and the billboards are to be seen in many parts of the Czech capital. One of them has been placed just a few metres away from the Prime Ministers luxury flat in Prague - which got him into this mess in the first place.

The city of Kladno has chosen an unprecedented way of battling against council flats being leased on the black market. Many of its flats are being leased out to a third party while the original tenant just collects the rent. The rent in council flats is at around 1,500 crowns but they get leased out for around 6,000 per month. The city hall is urging illegal tenants living in council flats to report on their landlord, promising that in return they will not be prosecuted and will be able to keep the flat for the regular rent-not an inflated one. The decision has evoked mixed reactions. While some people consider it a good way of getting council flats off the black market, others say that the practice is immoral. The town hall is nonetheless determined to see this through, arguing that previous attempts to resolve the problem have failed. And to prove that they mean business, they have awarded an illegal tenant in a council flat a proper contract, filing charges against the original tenant who was making a tax-free profit by renting out council property. Although it is not yet clear how successful this new tactic will prove it has certainly sown fear among those who have put a council flat on the black market. The illegal tenants stand everything to gain - and the temptation to report on their landlords would be tremendous.

A crowd of curious onlookers gathered on Prague's Old Town Square last Friday to see a chefs' contest in opening and serving oysters. The event took place within celebrations of St. Patrick's day in Prague, and the judge was none other than Jean Paul Manza, world champion in opening oysters. Although the Czech Republic is a landlocked country and imported oysters are a fairly new and expensive delicacy, Czech chefs proved to be very adept at this unusual discipline. Vaclav Fric had the best time and best looking plate of oysters -opening 20 oysters in 2 minutes flat. The chef from Radisson Hotel refused to disclose the secret of his success saying only: "every oyster is unique and you have to know how to best approach each and every one-some need more force, others would crack under the pressure." Asked how much practice he got in his daily work at the hotel Fric said it was different every day "on some days I open 200 of them, but there are days when nobody orders any". As Czech champion, Fric will attend the World Championship in Opening Oysters which is to be held in Ireland in September.

The employee of an exchange office in the town of Olomouc frightened away a robber who was threatening her with a hand grenade. The man allegedly entered the office, brought out the hand grenade and threatened to blow the place up if the woman failed to hand over all the money she had behind the counter. The employee, who's had a long and hard day, told him in no uncertain terms to get out and stop bothering her since she wasn't in the mood for jokes. The young man pocketed his grenade and fled.

Eurasian elk|Photo: Dave Bezaire and Susi Havens-Bezaire, Wikimedia Commons, CC BY 2.0 Generic
Although the European moose is not an animal many of us have seen outside of the zoo, there are a few of them living in the wild on Czech territory. The Sumava National Park is reported to have a herd of around twenty, many of them having wondered over the border from neighbouring Poland. The Park has now announced a special monitoring project within which around thirty moose and other deer living in the park will be given electronic collars enabling zoologists to document their movements and habits. The only problem is that the park's employees have so far not managed to track down a single moose. The moose is a very cautious animal which feeds only at night on tree bark, leaves and berries and rarely leaves the depth of the forest. The head of the Sumava National Park has now announced a special reward for any employee who manages to track down a moose and fit it with a collar to enable the project to go ahead.

How do you best attract tourists to the Czech Republic? The Pardubice authorities claim to have hit on the perfect solution: give them an unforgettable wedding at a reasonable price. The region is spending close to a million crowns on publicity and is cooperating with a firm which would organize weddings for foreigners down to the smallest detail. Brides and grooms could take their pick from a large number of beautiful castles and chateaux -baroque, gothic or renaissance - they could chose to have a ball or live band or maybe take a trip in a balloon after the wedding ceremony. According to the agency working on the project they would take care of every little detail - down to the groom's shoes and the bride's hairdresser. Weddings in the country's many castles and chateaux are extremely popular with Czechs and their administrators are used to offering special services. A wedding fair held in the Czech Republic recently showed that many foreigners would be interested in a wedding day in a historic environment, especially when the overall expenses would be much lower than in their own country. So, if you are planning to tie the knot - check out the possibilities in the Czech Republic. 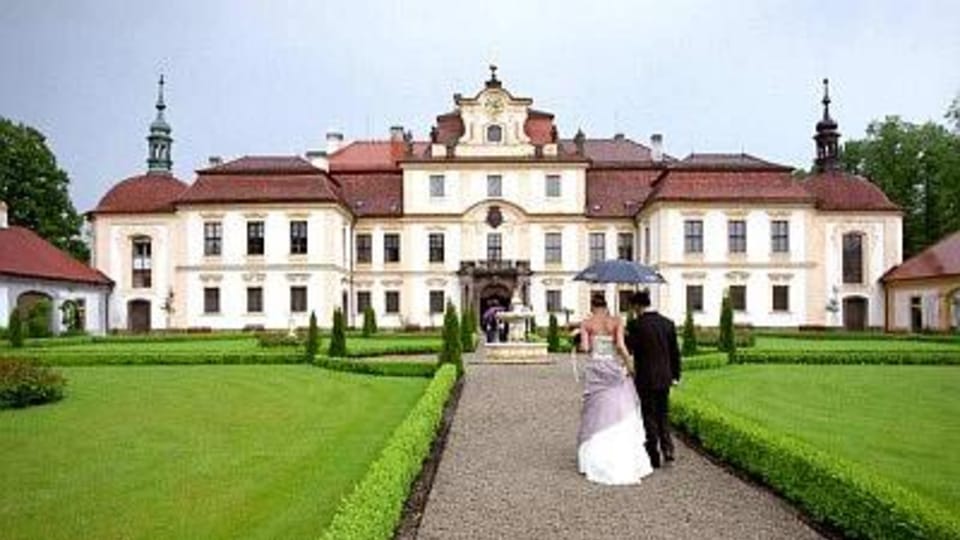 And finally, doctors at a Brno clinic have managed to save an eight year old girl -Terezka Fortova - giving her a heart transplant at the eleventh hour. Terri waited to get a new heart for over two years. There was no suitable donor and both the doctors and her family feared she wouldn't make it. Then the tragic death of a three year old boy saved her life. Tereza is said to be recovering well and is looking forward to learning to ride a bike. There's one lady who'll always be able to claim she's young at heart!