A new exhibition entitled ‘Fear of the Unknown’, previously shown in an earlier inception in Bratislava, opened this week at Prague’s National Technical Library, focussing on the plight of refugees and the discourse surrounding the migrant crisis. The discussion is one which has been highly-politicised and exploited not only by fringe politicians but sadly even by the political mainstream. One of the exhibition’s main aims is thus to show that hate and xenophobia are never the answer – and many of the installations make the point very effectively. We have a look at some of the works with Slovak-born curator Lenka Kukurová.

Lenka Kukurová, photo: CTK
When we met on site, she began first by discussing the show’s background.

“The title of the show if Fear of the Unknown and it is conceived as a special European and eastern European exhibition for local audiences: the main focus is the refugee issue and we have used ‘fear’ as a starting point for discussion. The reason is that the artists and I had a feeling that most of the discussion about refugee issues began to be very tense, counter-productive, not bringing any solutions and not leading anywhere.”

Certainly many politicians have gotten involved, not just in the EU but around the world, some for the better, some worse.

“Yes and we wanted to react to the political agenda as well as the lack of solidarity in our country. With this show we are saying it is ‘Ok to be afraid’, this is a new situation, we don’t have great experience with multicultural society over the last 70 years but it is not okay to be xenophobic. Fear is the beginning platform but we try and develop discussion from there.”

And by ‘we’ you mean the former Czechoslovakia, now the Czech Republic, which saw great changes in the population make-up because of the Holocaust, because of the expulsion of millions of ethnic Germans after WWII…

If we go back to the start of the refugee crisis, one of the central images of the show which we can see around us in the main room, are life jackets. If we go to the beginning of the crisis with refugees trying to make it across the Mediterranean, European politicians met and agreed it was not acceptable to do nothing. Now, politically, people are blaming the German chancellor for opening Germany to the most refugees, and also, we are living in the age of Trump, where we have seen a ban enacted on people from seven countries. So we have even more upheaval added to the mix. That is part of the situation as well, obviously…

Photo: CTK
“Unfortunately, the growing lack of solidarity is not only in Europe but in the US as well and we just see a lack of a humane attitude. From my perspective, artists are the first who should and who do react to wrongdoing in society; their work is an indicator about the state of society. Art needs to serve as a means of communication and a means of making people alert of the fact that there is something going on which is not correct.”

How many artists are represented?

“Twenty-seven artists or art groups. The artists selected are mostly from this region: Slovakia, Czech Republic, Poland, Romania, Austria and Germany. The Prague show is the second inception of this show, the first was in Bratislava. This one is slightly modified; around half of the artworks are created specifically for the show. All of the artists represented have been commenting long-term on political and social agendas.”

And what are some of the media in which the artists are working? Is it a mix? Video, found object…

“The main focus is the refugee issue and we have used ‘fear’ as a starting point for discussion.”

“We have some found object, for example, in the form of the lifejackets which were found in Lesbos, by German artist Birgit Rüberg and we also have this large set of children’s vests for kids from three months of age and older which are lined up here – that is the work of Czech artists Katerina Šedá. And there are videos, for example, Austrian-German artists Anna Witt who comments on migration from Czechoslovakia before 1989. We tend to forget today that we were also once refugees.”

So we are looking around now at some of the other works.

“This artwork is in the form of ‘traditional’ plates on the wall but with a twist. Instead of traditional images, we have various catastrophic scenarios or conspiracy theories depicted: an Arab group taking down a Christmas trees in Brussels, the Star of David as world domination, West Ukraine declared a country and so on. The artist, Janka Duchoňová, was inspired by the book The Clash of Civilizations, full of xenophobic ideas about how the world will be conquered.”

Photo: Jan Velinger
It is interesting that you should mention Samuel Huntington: there is an article in the New York Times (Trump Pushes Dark View of Islam to Center of U.S. Policy-Making, Politics, New York Times, February 2, 2017) about how much traction that theory has allegedly gotten with the current Trump administration...

“I think it is very dangerous to create catastrophic scenarios because they create an agenda of fear, hatred in society and people are pushed into a corner and begin to react irrationally, which is obviously not good.”

“Here on the side we see work by German artist Mandy Gehrt who has worked with refugees for many years. What you have are pieces of furniture, wooden chairs which show photos of things which refugees from Aleppo lost, who had to flee because of bombardment and the war. They are their only memories, in their phones now. Fragments of their homes.”

“Unfortunately, there is a growing lack of solidarity, not only in Europe but in the US as well.”

There is a contrast also between these very simple seats, crates almost, very basic, to some of the ornamental details depicted. There’s that contrast at play as well. Okay, let’s try upstairs…

Now what we are looking at work by Lukáš Houdek of the Czech Republic whose installation is a large replica of a metal transport container. It is a multimedia installation and what you can hear is the constant rumble of a truck on the highway and what it captures is the desperation and fear that refugees must feel in trying to get to the EU, hidden in the back, in the dark. None of us would want to experience this.

“Many times this is what refugees have to endure, to huddle crammed in the back of this kind of container to try and cross the European border.”

My three-year-old daughter has been with me at the show and we have entered the container. She is not afraid but I am still worried she will get scared, so I will take her out now. This experience, even for just a couple minutes, feels like it will drive you mad, if you had to endure this hour after endless hour. It immediately makes you think of people at home watching TV in comfortable living rooms and not fully understanding the desperation that people face to make them take this step. And of course this is just a tiny sliver of the whole refugee experience.

“I really hope that this encounter will open people to think in a different way.”

Fear of the Unknown is FREE and continues at the National Technical Library (NTK) until March 31. 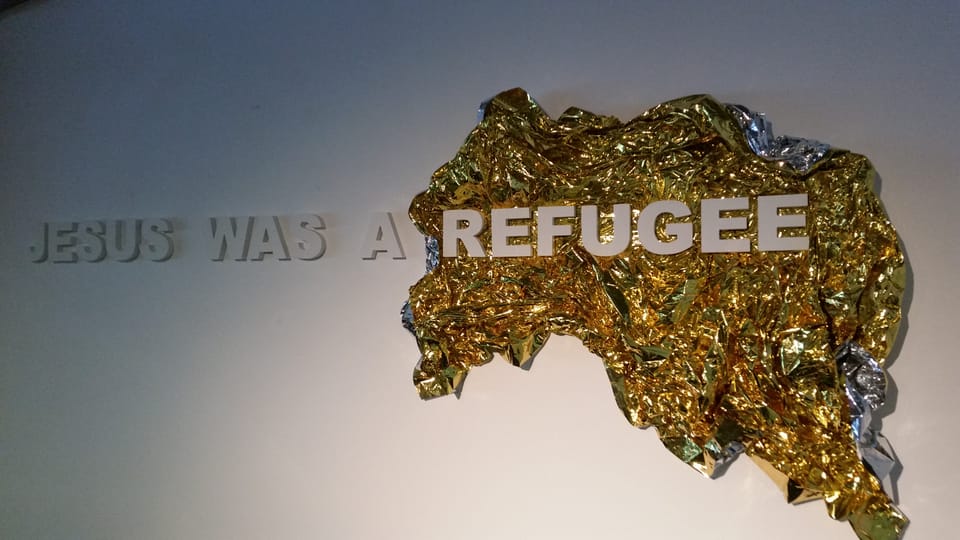 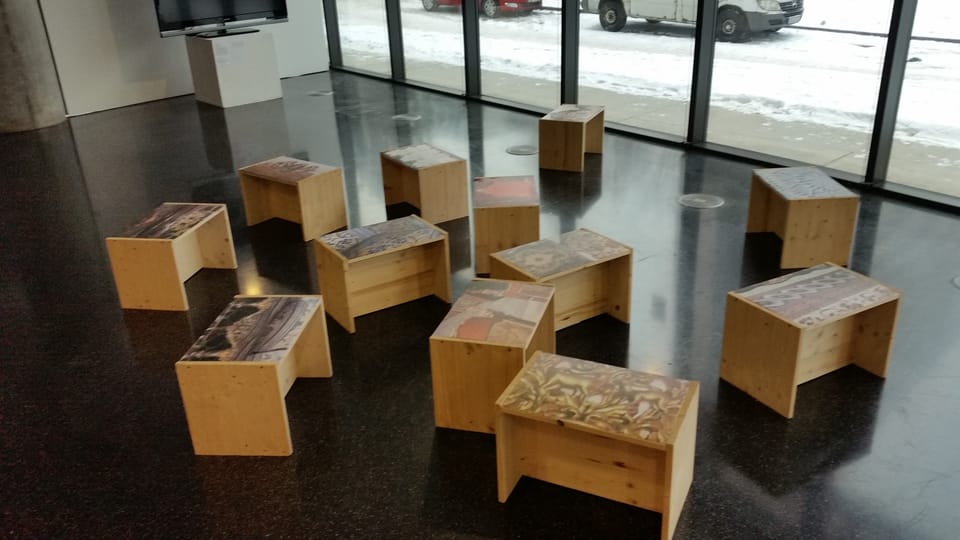 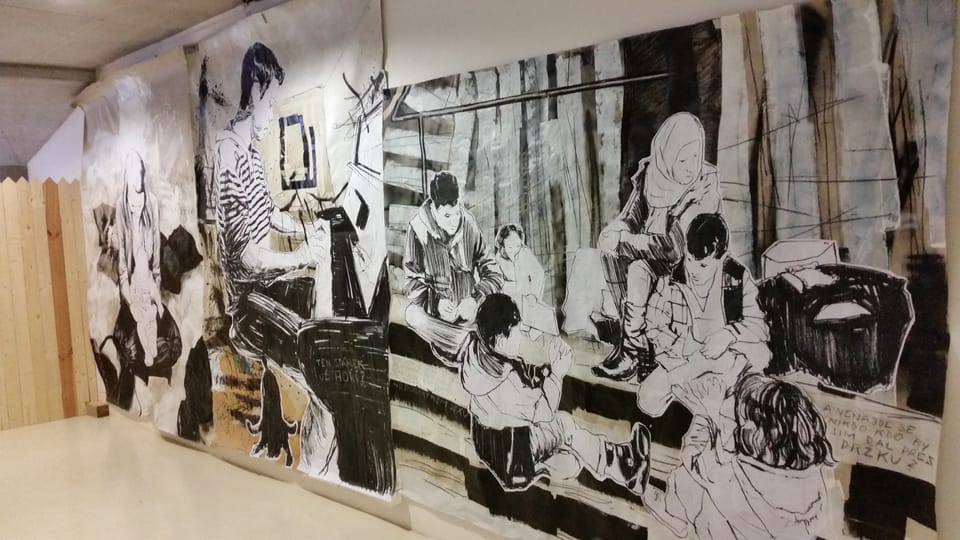