Czech photographer in Cambodia: I aim to tell a story through my photographs

Czech photographer in Cambodia: I aim to tell a story through my photographs

Jakub Žák is a photographer who spent more than five years in South-East Asia documenting the work of the Czech Development Agency and other NGOs active in the region. On his return from Cambodia, he visited Radio Prague’s studio to talk about his work there, the remote areas he visited and how the experience changed him as a photographer. I began by asking him how he came to work in Asia.

Jakub Žák, photo: Ondřej Tomšů
“I was working as a journalist in the Czech Republic, when I got an offer from the Ministry of Foreign Affairs and I was sent as a communications officer to Vietnam to work for the WHO and that’s how I got to Asia. From Vietnam I moved to the Philippines and then to Cambodia. In total I spent more than five years in South-East Asia.”

You just spent a year in Cambodia documenting the work of the Czech Development Agency and the NGO Caritas, where did your work take you and what kind of things did you cover?

“The Czech Development Agency is mostly funding health-related projects in Cambodia –every year it spends over one million euro in the country on such projects. I was documenting projects in Takeo Province in Cambodia, a province that lies south of the capital Phnom Penh. Those projects were related to eye-care, eye operations and then there are projects in the northern provinces of Cambodia and those are related to child mortality and mother health care.”

So where did you start?

“First I worked at Takeo eye clinic which is co-funded by the Czech Development Agency and Caritas. Imagine a provincial hospital in South-East Asia…the place is clean, by local standards, but it is very poorly equipped. Every year this clinic provides eye-surgery to over 11,000 patients. The patients come to the hospital with different problems. The most common is a cataract and the hospital provides cataract eye-operations. The patients who came in were almost blind, they paid three dollars and thanks to the operation, which takes 15 to 20 minutes, they could see clearly again –it was like magic. I was taking pictures before and after the operation and I will never forget the expression of joy on the face on one woman when she came out of surgery –she was 63 years old and had been almost blind for the last eight years. I will never forget the smile on her face when she could see again.”

You said you also documented a project aimed at fighting infant mortality, right?

“There are two or three projects in the northern provinces of Cambodia involving Caritas Czech Republic and the NGO People in Need where local doctors and nurses are trained in how to take care of mothers and how to take care of newborns. Because Cambodian mothers often lack basic information about infant care – how to breast feed, how to care for newborns…and thanks to the training provided by Czech NGOs the child mortality rate is really decreasing.” 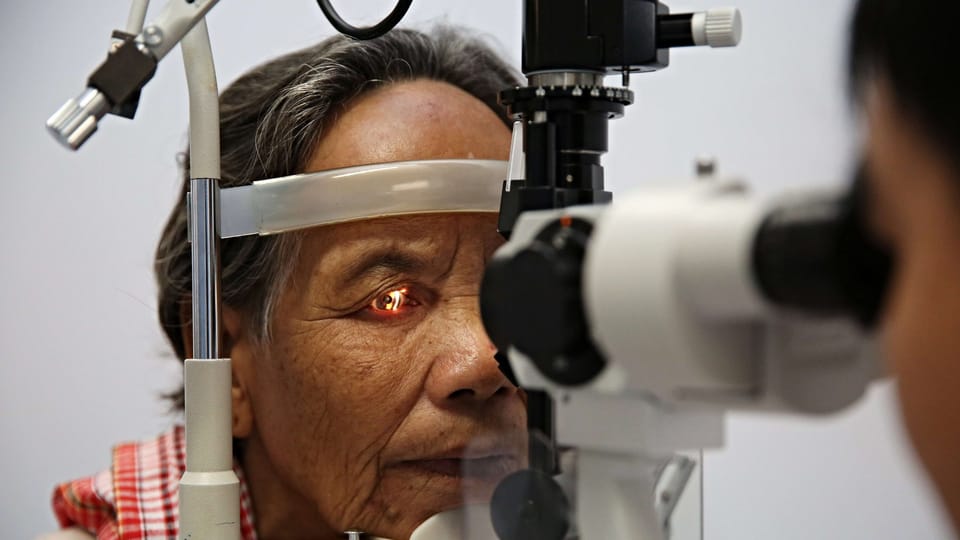 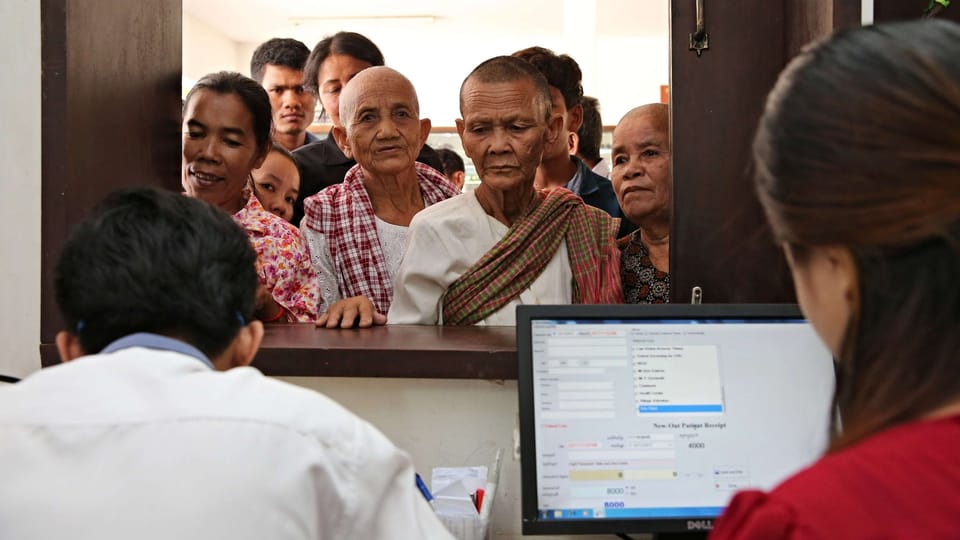 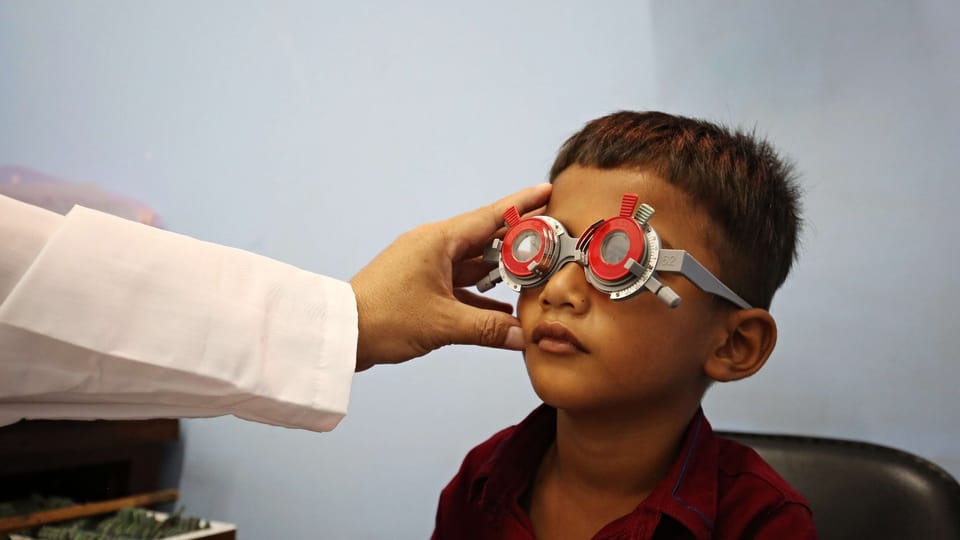 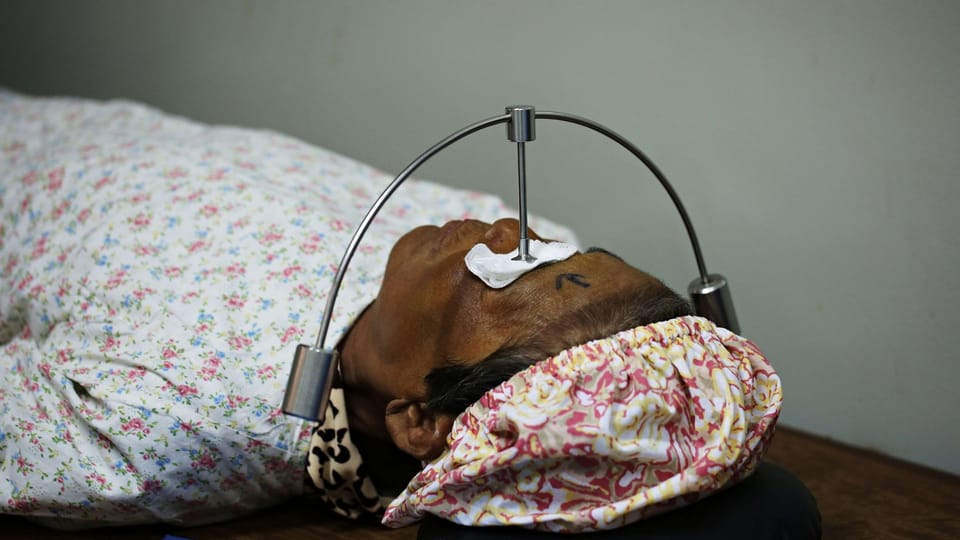 You told me you actually saw a woman die in childbirth…

“That was at a provincial hospital in Takeo Province and I had the opportunity to go there and take pictures during a delivery, because some of the equipment there was provided by the Czech government. Unfortunately, I was there during a delivery at which the mother died because of extreme bleeding. It was one of the saddest and most heartbreaking moments of my career as a photo journalist, because there was nothing the doctors could do.”

You also work as a freelance photographer wherever you are and you told me that you travelled around Cambodia on a motorbike – where did you go?

“After I landed in Phnom Penh I bought a motorbike at a local market and travelled round Cambodia for a couple of months. I tried to avoid all the tourist attractions, I travelled to the northern provinces of Cambodia - Ratanakiri Province and Mondulk iri Province and I can tell you that it is not super easy to get there – there are unpaved roads, no electricity and it is almost impossible to get there during the monsoon season because everything is flooded. Cambodia is a flat country and once the rainy season starts you basically need to take a boat.”

When you travelled how did you communicate with the locals, where did you sleep, what did you eat?

“It is not a big issue. Cambodians are always helpful, they are kind, nice people who smile all the time. You may know that Cambodia is a kingdom and what is interesting is that the king studied in Czechoslovakia, so once you mention that you are Czech it is really helpful and then even if you do not understand a single word of Khmer you can always communicate with the locals using your hands ….if you go to the countryside there are no hotels, but the locals are always willing to take you in and let you stay in their huts – mostly made from bamboo or wood – and give you food – mostly rice, fried chicken or eggs.”

What were your impressions of the country – the nature – did you photograph nature or people?

Photo: Jakub Žák
“I mostly took portraits. I would say that a photograph is good if there is some story behind it. So what I usually do is ask for permission to take a picture and then, if it is at all possible, I talk to the people to get more information about them – to get the whole story.”

“When I lived in Phnom Penh, I lived near a place called the Russian market – no one really knows why it has that name – and it was a perfect place to take pictures. It opens very early in the morning – I would say 5 am – and you can see all the locals from different villages coming to sell their wares –from live turtles to any kind of goods that come to mind. It was a perfect place for portraits.”

Did you prefer to work at dawn or dusk? What kind of light do you prefer?

“For me it was easier to work in the early morning, because Phnom Penh is not really safe after darkness falls. There are people trying to snatch your camera or your bag and that does not happen in the morning.”

You also mentioned that you look for the story behind the photograph – what kind of stories did you find there – give us an example.

“As you probably know Cambodia was under the Khmer Rouge for almost 30 years and if you talk to any Cambodian they always have something to say about the previous regime, how their family was involved, who died or who was tortured by the regime – there were many interesting stories, though most of the time very sad stories.”

Did you photograph children as well?

“Yes, but I much prefer taking pictures of old people?”

“Because of what they have been through, because it shows in their face. There are many landmines in Cambodia still and there are many people missing arms and legs, often begging in the street and they are always willing to share their story with you.”

Photo: Jakub Žák
Did your time in Cambodia change you as a person and did it change your priorities as a photographer –what you want to capture on film, what is important?

And did it change your priorities as a photographer?

“When I started working as a photographer I rarely stopped to ask for permission. I just wanted to get a good picture in any possible way. Now I always ask for permission and always try to work more closely with the people I am taking pictures of.”

You mentioned that you always look for a picture with a story behind it. Did you do that in Europe, before you worked in Asia?

“In Europe I worked as a photo journalist for big media outlets, so I was taking pictures at meetings of political parties, conferences and so on – not a picture that tells a story on its own. But once I moved to Asia I found that it is very important for me to capture something that tells a story on its own, so right now I am really into portraits and I prefer to tell a story through my photographs.”