Kampot Pepper, a gourmet pepper sought after by chefs around the world, comes from Kampot province on the south coast of the Kingdom of Cambodia. Klara Dohnalova and David Pavel discovered it on their first trip to the country and soon set up a business aimed at bringing Czechs a whole new culinary experience. Their company Pepperfield offers a luxury line of black, red and white Kampot pepper that is guaranteed to spice up any dish. They came to Radio Prague’s studio to talk about their enterprise and started out by telling me what inspired them to launch this business.

David: “Basically it was a love for Cambodia. When we travelled to Cambodia we simply fell in love with the culture, the people and the whole country. After that it was easy, because we were looking for projects that would enable us to help and everyone pointed us in the direction of pepper. We didn’t know anything about Kampot pepper at the time, so we needed to learn a lot, go through all the stops, logistics, business and so on and now we are in the marketing stage and selling Kampot pepper to customers here in the Czech Republic and have big plans to expand to other EU countries.”

I understand that pepper farming has a long tradition in Cambodia, but the pepper farms were almost wiped out during the terror of the Khmer Rouge, is that so?

David Pavel, Klára Dohnalová, photo: Miloš Turek
David: “Exactly. Kapot pepper farming has a tradition going hundreds of years back. The Khmer Rouge broke it off –ordering rice production for about five years- and after that it was difficult to start it again. In around 2,000 the farmers re-established the first pepper farms and drew on know-how from their parents and grandparents about pepper farming. It was a long way and I think in 2015 the European Union recognized this old tradition and they gave Kampot pepper the certificate that helps to make it so special and so unique.”

So this pepper has a protected geographical indication – like champagne…

Well, let us talk about what makes it so special. Why is it that chefs and gourmets the world over swear by this pepper?

David: “It is simply in the taste. Because when you have ideal conditions –like the soil and climate-it makes the pepper so special.”

Combined with the know-how of the locals regarding when to harvest it and how to dry it and so on?

David: “Yes, you have to know when to harvest it. You have different types of pepper, but they all come from the same plant. So at the beginning you have green pepper. When you harvest it in January or February and you let it dry out in the sun it turns black and that is the well-known black pepper. But in Kampot you have the best conditions to leave it on the plant until late April and then you get red peppercorns. I think in the world there are only about five places where the pepper can reach that stage. And that makes it so special. When we talk to chefs in the Czech Republic they know different kinds of pepper, but usually they do not know this red pepper and are surprised by its consistency and taste because it is fruity, it is completely different but it is still spicy. 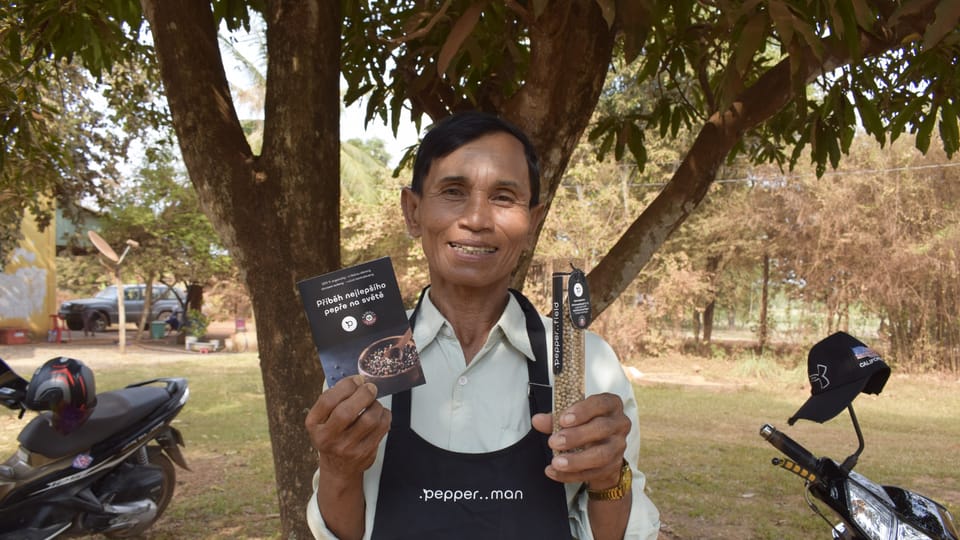 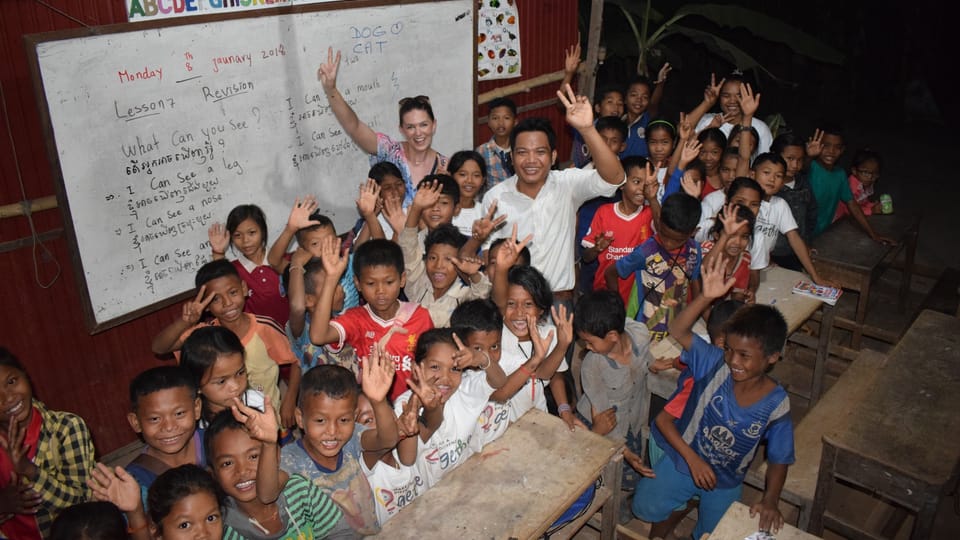 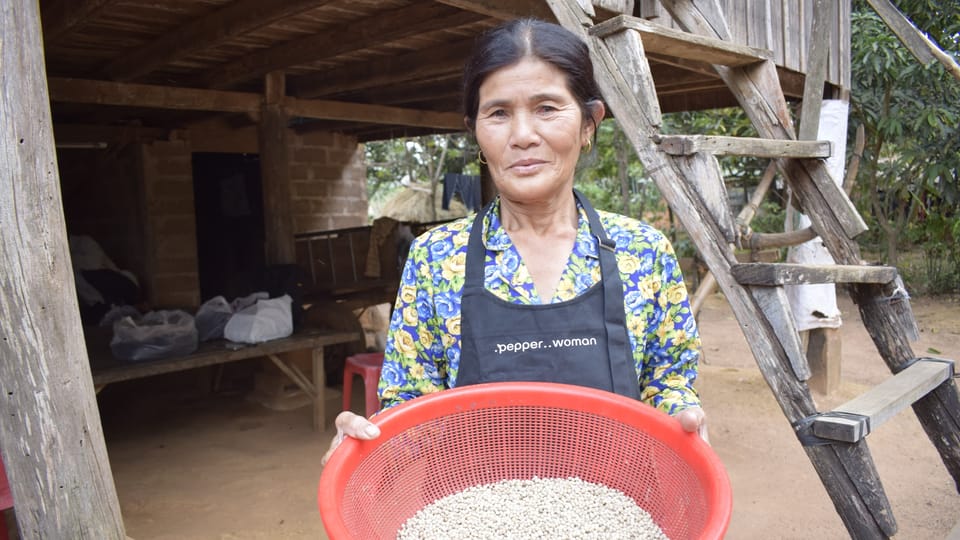 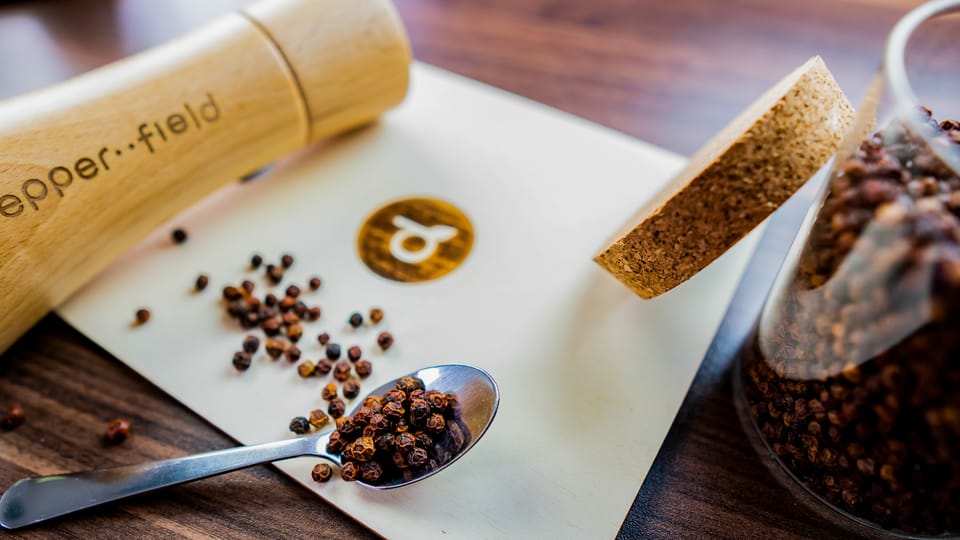 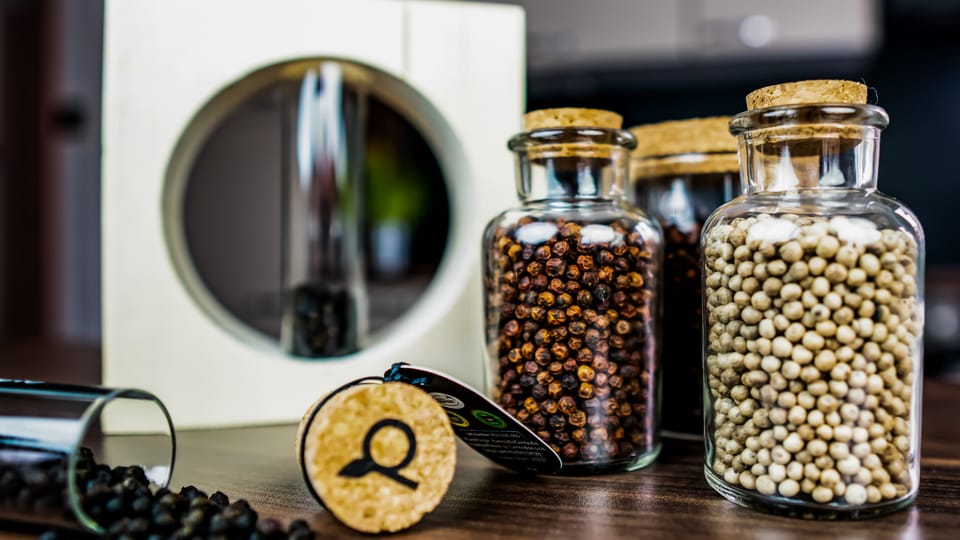 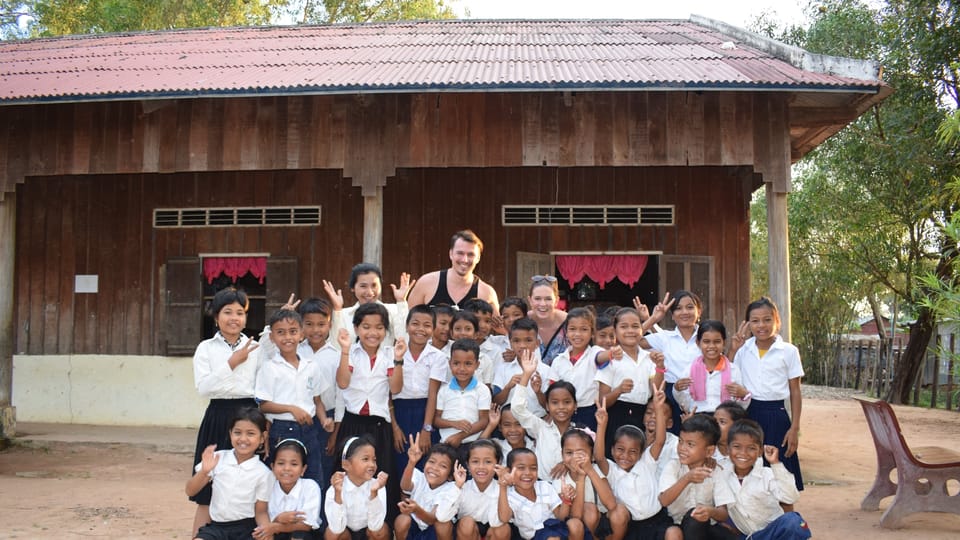 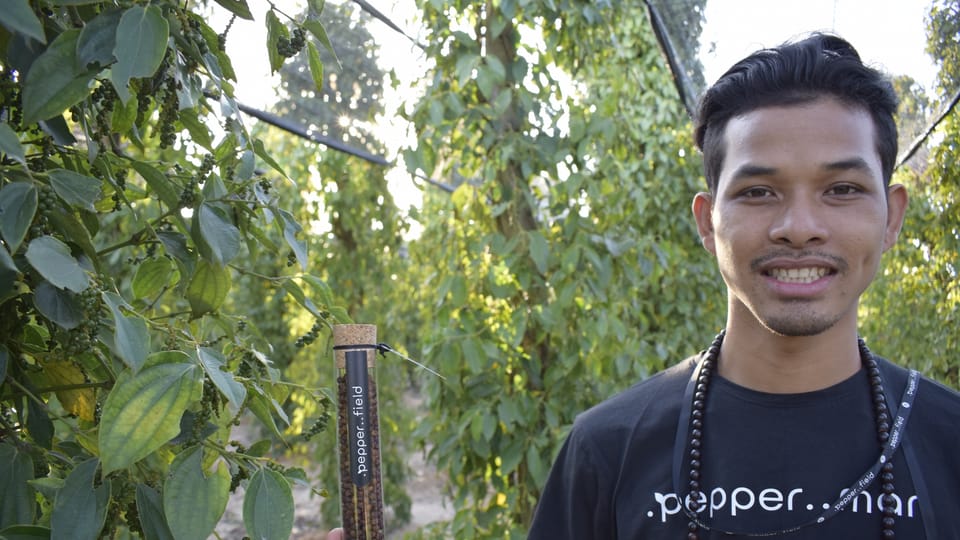 So this white pepper is actually red pepper that has been peeled?

David: “To get the white pepper you take the red pepper, you boil it and by boiling it the pepper corn loses the peel and all the spiciness of the red pepper. You have only the core of the pepper and that has a unique taste of its own.”

So you sell black pepper, red pepper and white pepper. Klara presumably you cook with all of them – and I suppose each is used for different dishes?

Can you two remember when you first tasted it?

Klara: “We first tasted Kampot pepper in Cambodia with sea food and it was so amazing! It was fresh green pepper and they had whole peppercorns. It was a completely new taste for us.”

Was that when you first thought to start a business with it – or did that come later?

Photo: archive of Klára Dohnalová and David Pavel
David: “It came later. We had come back after a long stay in Cambodia and the only thing we really knew was that we wanted to launch a project that would make an impact. Not a small charity project with a school that we have there, but something beige with long-term sustainable impact. To be honest we had a lot of ideas and some were even more interesting for us at the time, but somehow the pepper won out in the end and we chose it as the best option. We knew it would not be easy and time proved that to be so.”

You got help from the Czech Development agency did you not?

David: “’Only later. We first approached them with another project, not very well prepared, a snap decision on our part so they did not want to commit. The second time around we presented them with our pepper project and this time we were fully prepared, we had tested the market, done the logistics, certificates, laboratory tests and all that. And they said - OK guys we will be happy to be part of this project.”

You now work with a number of Cambodian farmers, is that right?

Klara: “Yes, we want to help small farmers in Cambodia who really need our help because they are not able to export their pepper by themselves. They do not speak English, know nothing about logistics, lab tests, certificates and so on. So sometimes, it is very difficult to work with them, but they are amazing people. We buy their pepper for fair prices and help them have better living conditions, travel, to repair their houses and pay for their children’s education. That’s why we do it. Of course, there are big farmers in the country but they are rich and sustainable and we wanted to help the slam farmers of whom there are about 400 in the region.”

I understand you are also helping local schoolchildren as well –is that right? That part of the profit goes back to Cambodia?

Photo: archive of Klára Dohnalová and David Pavel
David: “Yes, that was the idea behind the project. We wanted to establish a long-tern sustainable business - to take the best Cambodian product and bring it to Europe. So we buy from small farmers and the logistics and all that is up to us. Whatever profit we can put back –we will. When we came to Cambodia we started helping one school. We met the director, became friends and started to support them but that is help on a smaller scale. With this project we want to achieve more. We want to channel the profit in two areas – education and health care. But first we need to get the business going so we would not be able to offer hundreds of dollars, but thousands. For me what is best about this idea is that we are doing our job, but it is the Kampot pepper making the profit and part of it goes back to Cambodia –that is the sustainability behind it.”

Clearly you have gained a good knowledge of Cambodia, you meet with the farmers, talk to the locals…what are your impressions of the country and its people?

Klara: “We like especially the warm nature of the Cambodian people. They are amazing people who love their families. For them the family is the most important thing in the world, and after that are friends and their work. I like that. They are so honest, always smiling, always happy. They have next to nothing but they are immensely positive and grateful for what they have.”

Do you feel they opened up to you –even though you were foreigners from a distant land?

David: “That’s part of their culture. Even if you meet someone on the street in the evening and start chatting they will invite you to dinner or to join them for a beer…”

So you have eaten with some of the locals?

David: “Yes, in their homes, in a restaurant, on the street just to have a beer. What usually happens is you have too many beers and the next day you are best friends. We made a lot of friends that way. Not just friends, but we have families there which we feel connected to and any time we go back to Cambodia we feel like we are going home. It is like coming back to our parents, our sisters, our brothers. That is unique.”

Photo: archive of Klára Dohnalová and David Pavel
Klara: “Sometimes we say that we are Czech people with Cambodian hearts.”

And what are your long-term plans?

Klara: “To make the business sustainable, not only in the Czech Republic but also in Europe. This year we have set ourselves the goal to help 50 farmers but next year we want to help four hundred – so we will see.”

David: “If we stay just in the Czech Republic there is limited buying power –a limited number of customers – but our long-term goal – and something we promised these farmers –is that we would open the door not just to the Czech Republic but to the European Union. So there are still many countries where we need to promote Kampot pepper and all the steps we are taking here –like PR, education, marketing the product, finding customers – all that can be replicated in other countries and you multiply the effect. You do not just have a profit from the Czech Republic you have a profit from other European countries and more money for the projects that we want to implement in Cambodia.”