The bombing of Prague from a new perspective

The bombing of Prague from a new perspective

For all the suffering that Bohemia and Moravia endured during WWII, relatively little of the damage was physical. Prague escaped the terrible bombing that left so many of the ancient cities of Europe wasted. There were incidents, however - two in particular in the last year of the war that brought large-scale destruction and great loss of life.

The first was during the bombing of Dresden, when a cloud of American B-17s arrived over central Prague due to a navigational error and let fly more than 150 tonnes of bombs, killing 701, wounding over a thousand, and flattening 93 buildings. Error or not, Prague had been a secondary target.

The second sortie one month later was no accident, and it targeted the industrial area in north-eastern Prague. Three waves of more than 500 planes pummelled the area for about an hour and a half. Another 370 people were killed in that event.

While these were key events of the war, there was hardly any quality photographic record until just a few years ago, when a set of photographs was brought to the attention of the Military History Institute. Their creator, one Stanislav Maršál, had died a few years before, and had never in his long life shared them with the public. Perhaps he kept his memories to himself because, during the war, he had been employed as a photographer for a Nazi youth organisation. But that was also the thing that allowed him access to the events that he photographed in February and March of 1945, and let him make a major contribution to military history.

Jan Uhlíř
A new book by the well-known historian Jan Uhlíř of the Institute of Military History called Bomby na Prahu (Bombs over Prague) presents a little-seen side of this city’s torments towards the close of WWII.

“The set of photographs is outstanding in just about every possible way. It does not often happen that a photographer would make such a series and let it lie for more than half a century without anyone noticing… What makes it so unique is the huge number of fantastic shots, and photo historians are very excited because they had no idea that someone like Stanislav Maršál was taking such high-quality photos in such quantity at that time… When I first had them in my hands in 2008 I was simply thrilled, because I realised that no one, even the Czech Press Agency has shots like this.”

You can very quickly see what makes these photographs so marvellous – they capture central moments of a largely unseen moment in the conflict, but they also do so with excellent artistic grace. The Defence Ministry has referred to the photographs as some of the most significant from military history. Who then was this man, almost a complete unknown? After the war he worked for 14 years in a steel foundry, until receiving a disability pension. For the thirty years after that he devoted himself again to photography, focusing on classical music and theatre. He died in 2004 at the age of 94. Six years after that, when the photographs were first released, his daughter Jana spoke with Radio Prague. 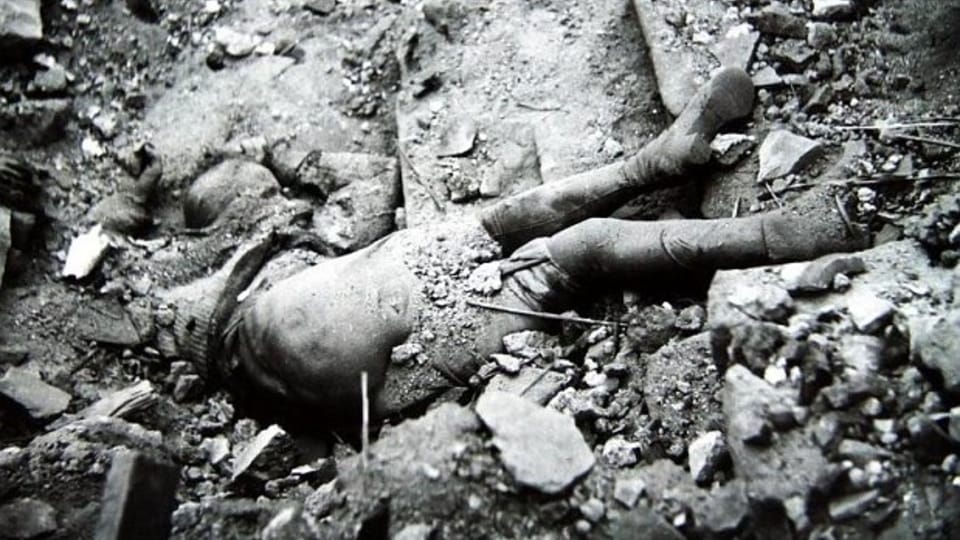 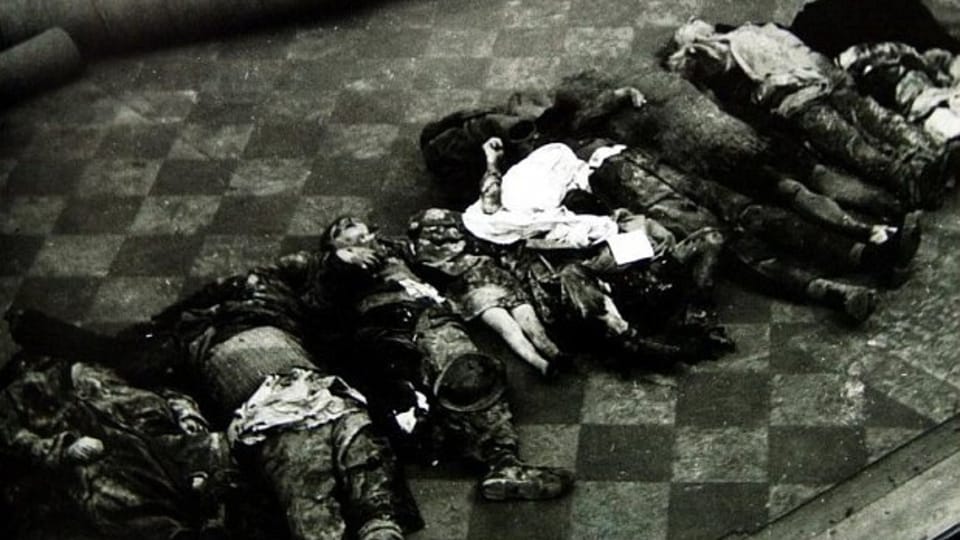 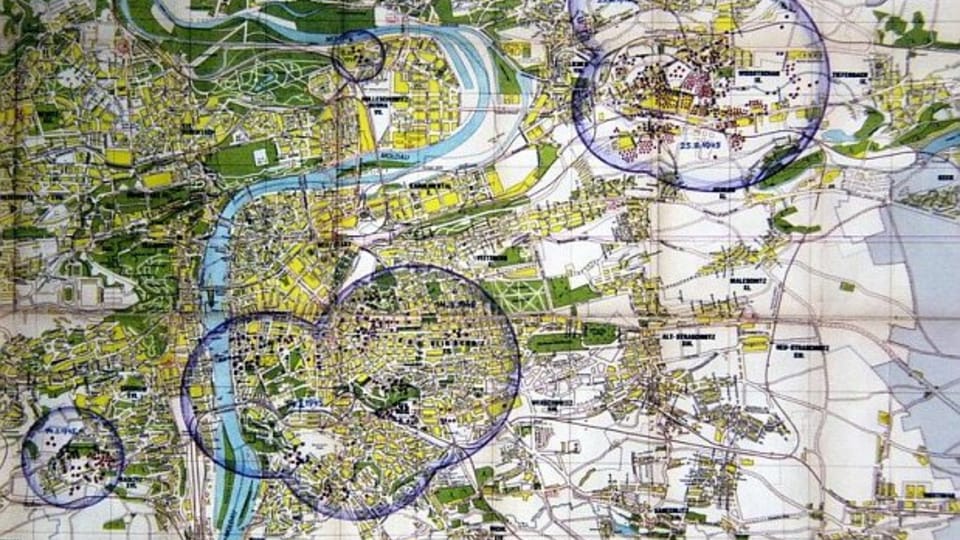 “It’s very unique. He never showed them to anyone. He didn’t want us as children to look at them because he was afraid it would be too emotional for us. Now I understand it better. I saw them once, and I remember I couldn’t sleep afterwards. Our father really took that time very personally. He was always emotional, long after that event. When we went to those places he always talked about it and you could see how unhappy he was. The memories of this event were still in him, the whole of his life. You can’t get over something like that easily.”

A particularly peculiar aspect of the photographs is that Stanislav Maršál was able to photograph both of the American raids of 1945. Apparently, the youth organisation he worked for was sent to clean up the rubble. The February raid had nothing like the force of the one in late March, but it was twice as deadly, sweeping through the central districts of Vinohrady, Vršovice and Nusle. A bomb that later made the space for the famous Dancing House, killed a number of children, including three whose mother survived, only because she was in the next room. The fact that that raid was intended for Dresden shows what different strategies the Allies had for German and occupied targets.

Photo: Stanislav Maršál
“There was a huge difference between the strikes. The first was a navigational error - we are almost 100% certain of that today. The second was aimed at industry and at limiting victims as much as possible; it was scheduled for a Sunday to make sure that workers on machines wouldn’t be there. It was targeted on Libeň, Vysočany and the airport, and they used different types of bombs. People knew from the February bombing that cellars were not the place to hide – many had collapsed in the first strike, and bodies were still being found in the 1970s. So on the outskirts of Prague people ran into the fields, but there they were killed by the shrapnel...“

Prague was of course not the only Czech city struck during the Second World War, nor was it the worst hit. The western industrial centre of Plzeň suffered a hard fate for the presence of the Škoda works, now known for their cars, but even in the First World War reputed for the powerful weaponry they manufactured there. Kolín and Záluží u Mostu were also targeted for their storages of gasoline, which was worth its weight in gold towards the end of the war. All in all, the Protectorate of Bohemia and Moravia was relatively safe until mid-1944.

Back to Stanislav Maršál, though, a little-known Czech being carried along by the 20th century, who will now be known by historians as just the right man in just the right place. Dr. Jan Uhlíř again:

Photo: Stanislav Maršál
“Another interesting thing about Stanislav Maršál’s story is his age. He was born in 1910, so he was around 35 when he made his 250-some-odd photos, and they say something about that age. It’s not just the speed with which he was able to move from one bombing scene to another, but a certain kind of courage with which he aimed his camera even at things that other photographers shied away from, namely human remains. He captured bodies torn apart by bombs and other exceptionally sorrowful things. He had the energy to be down on the square taking pictures of the funeral ceremony one minute and to be up in the church steeple taking pictures the next. If he had been ten years older or younger, the pictures would probably look completely different. I think his age played an irreplaceable role in his achievement.”
Author: Christian Falvey
tag:
run audio