This week’s Sunday Music Show is focused on the new vinyl record Traxler 110, which will receive its ceremonial christening at the Gala Evening of the Czech Presidency of the Council of the European Union on September 26, 2022. The record is dedicated to the Czech-Canadian singer, arranger and pianist Jiří Traxler, who co-defined the Czechoslovak First Republic’s swing music era.

Traxler 110 features 11 covers of Jiří Traxler’s songs. These are performed by leading Czech and Czech-American swing, jazz, rock and opera musicians. Coming out with the record is also a special booklet tracking the history of Czech Canada. The author of the booklet, and the leading man behind the project, is the Czech Ambassador to Canada Bořek Lizec, who is our guest on today’s show.

“I am very excited about this project because of the many partners and friends who joined me in the effort to pay tribute to not only Jiří Traxler, who would be celebrating his 110th birthday this year, but also to Czech Canada as such and to our Canadian friends who stood by us throughout our history.

“The project is made up of two parts. One is the record, which is called TRAXLER 110 and features music of Jiří Traxler covered by music stars from many different genres. Those who don’t know Jiří Traxler will almost be able to listen to the original sounds of his songs, how they were first recorded in the 1930s and 1940s, thanks to the interpretations of Ondřej Havelka, his Melody Makers band and the Havelka Sisters.

“However, I also wanted to offer a different angle to Jiří Traxler’s music by showing how he would sound when covered by contemporary jazz and swing musicians, like Jan Smigmator or The Swings.

“I even asked some artists who probably never interpreted jazz and swing music before in their lives, by this I mean rock musicians, starting with the Czech-American global rock star Jim Peterik. Your listeners will know him as the co-writer of the song Eye of the Tiger, which I think is one of the best melodies in rock history. I am very pleased that he took part in the project.

“Another interpreter of Traxler’s songs is Czech rocker Petr Janda and his daughter Marta Jandová. We also got country music musicians, namely Jan Vančura and the band Plavci. Even our world opera star singer Adam Plachetka performs in two songs with the great pianist Emil Viklický.”

And just to give us an idea, how long is the album? How many songs are there?

“The album has 11 songs, which I think is a good amount. It is being released as a vinyl record. The idea behind it is actually a Czech-Canadian story in itself because the world’s largest record producer is a Czech company. I approached them and asked them if they were willing to help me with the album and also with the booklet that is featured together with the album.”

Will people be able to buy this album, or is it just going to be handed out to a special group of people?

“Unfortunately, this album, this set, is intended as our official gift during the Czech presidency of the European Union, so people will not be able to buy it.

“That said, I definitely wanted to share the project with a wide audience and therefore we prepared a special website: www.traxler110.cz.

“On this website you can find both the music and the booklet detailing Czech-Canadian history that comes with the record. I really felt that with so many star artists it would be a great pity not to share it further. I would like to thank them all for putting so much effort into it and I really hope that your listeners will enjoy the product of that effort.”

That booklet that comes with the album is something special by itself isn’t it? What exactly are you covering there?

“The booklet is large in size, just like the vinyl record of course, and it has 60 pages. I named the first chapter ‘Dawn of Czech Canada’. That was the time when Czech immigrants arrived in the prairies where there was absolutely nothing. In the best case scenario they would be dropped by a railway into the middle of nowhere without anything and they would build these iconic sod houses, or, in the beginning, just dig a hole in the middle of the prairie. This is the start of the booklet and there are even some photographs from this era in there, which were shared with me by these historical communities when I visited them. There are around 250 pictures from the past and closer to the present in there.

“The booklet covers the dawn of Czech Canada, then it goes covers the efforts of Czech Canadians to support President Masaryk and create Czechoslovakia. It also looks into the work they did to save it during the Second World War and the support that we received from Czech Canadians during the Cold War. Of course the prominent example in the case of the latter would be the Škvorecký couple, who by founding the 68 Publishers publishing house basically saved independent Czech literature of the Cold War era.

“Then in the booklet we trace the time after the Velvet Revolution, when Czech Canadians like the Škvorecký couple were cordially welcomed and received the well-deserved thanks for what they did for us. After that, we move into the contemporary period and list the most important projects that exist between Czechia and Canada.

"In the pages of the booklet I talk not just about the communities in Czech inspired Canadian cities such as Prague, or Taber (named after the Czech Tábor), but also about famous Czech Canadians throughout history.”

You actually have the booklet right here and, as I am flicking through it, I can see that it has a very nice retro design, one that is also reminiscent of that which was featured in your previous project – Together to Victory. Is this a uniform style that you are going with in your projects, or did you just choose it to go along with the many historical images contained within?

“First of all, I would like thank graphic designer Karel Scherzer, who is my good friend and to whom I send my warm regards for working with me on this. It was a big undertaking.

“But back to your question. Yes, it was certainly my vision from the beginning. We really wanted to have this retro feel with the booklet.” 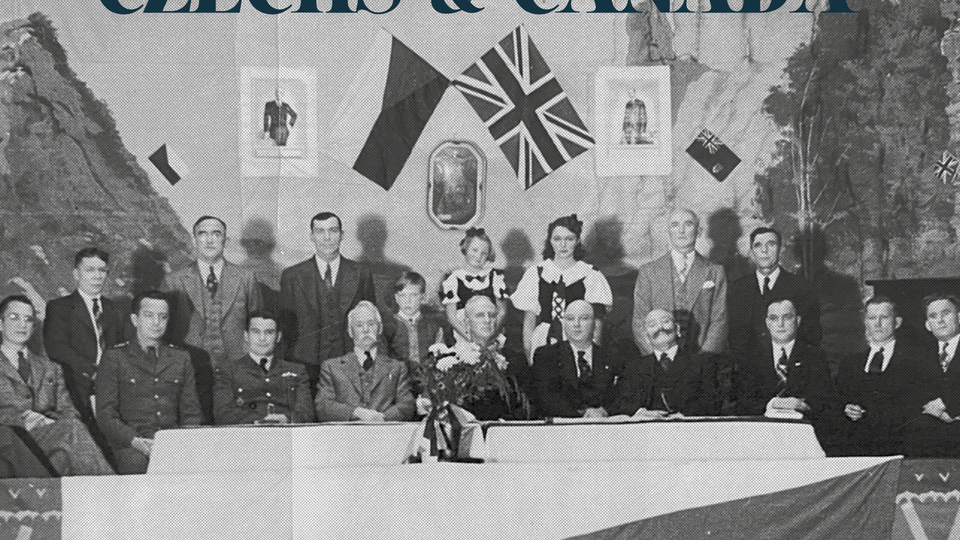 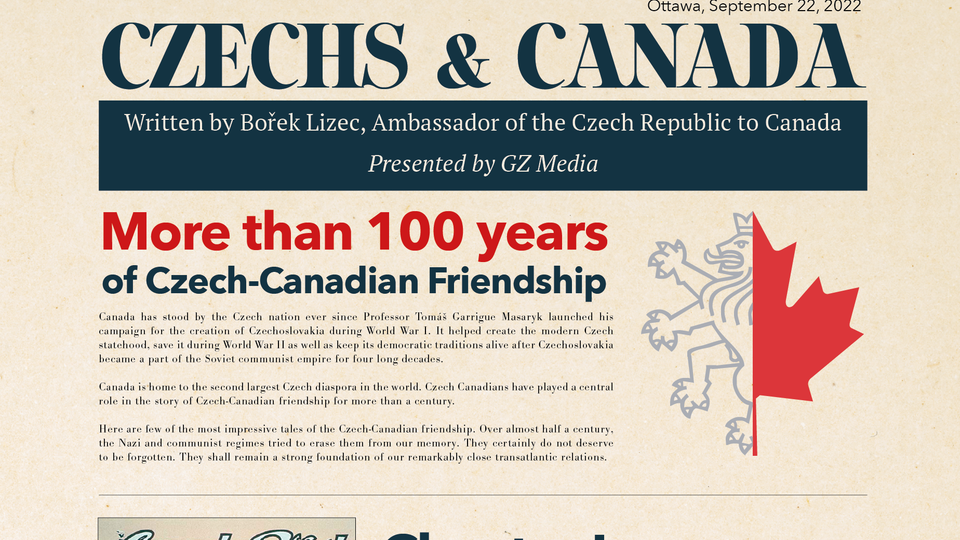 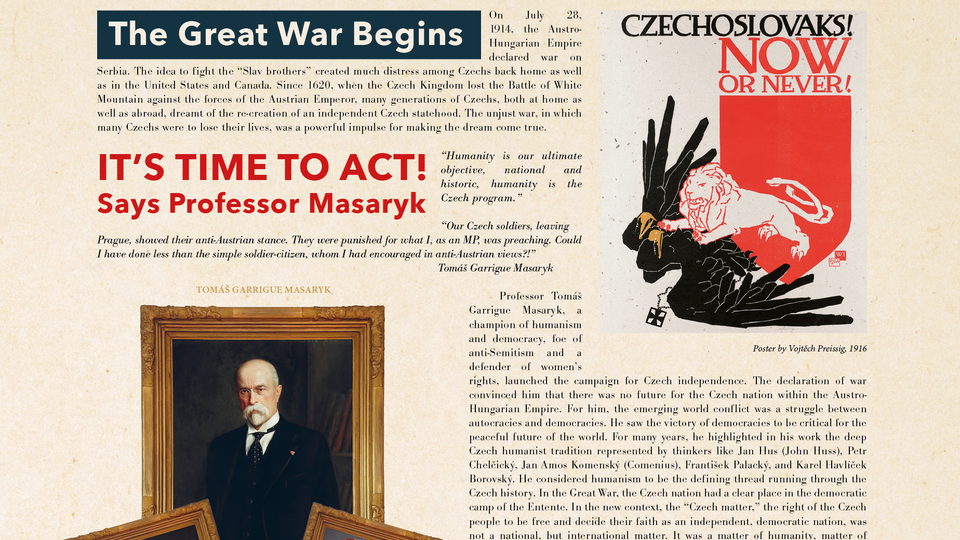 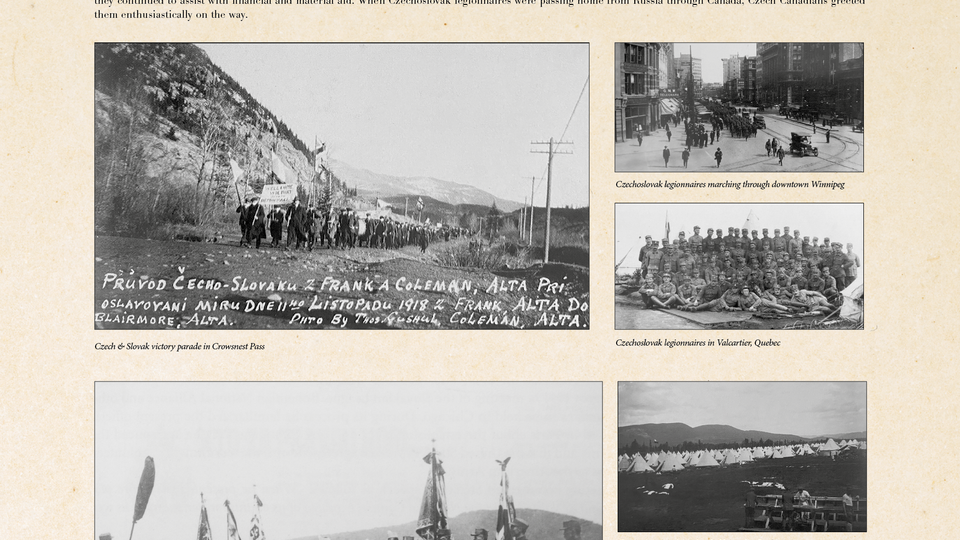 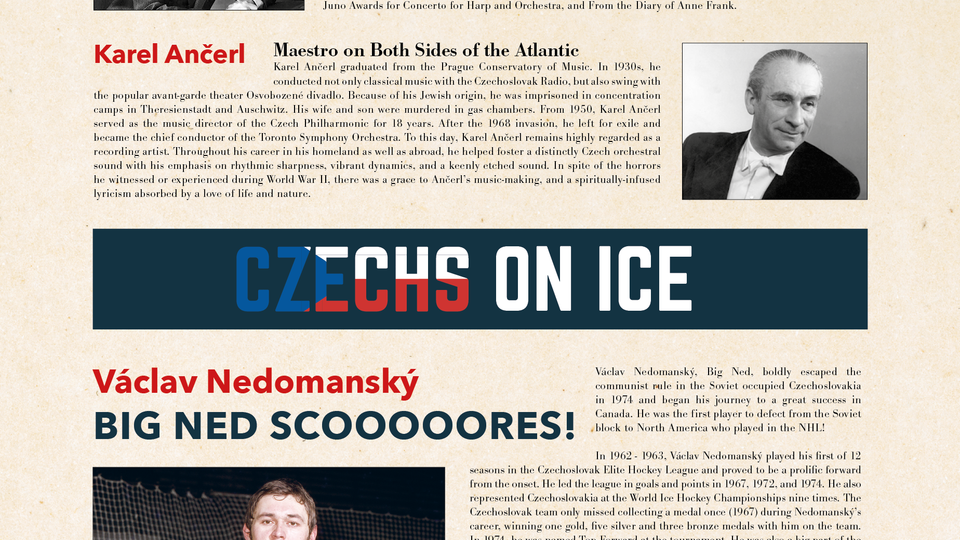 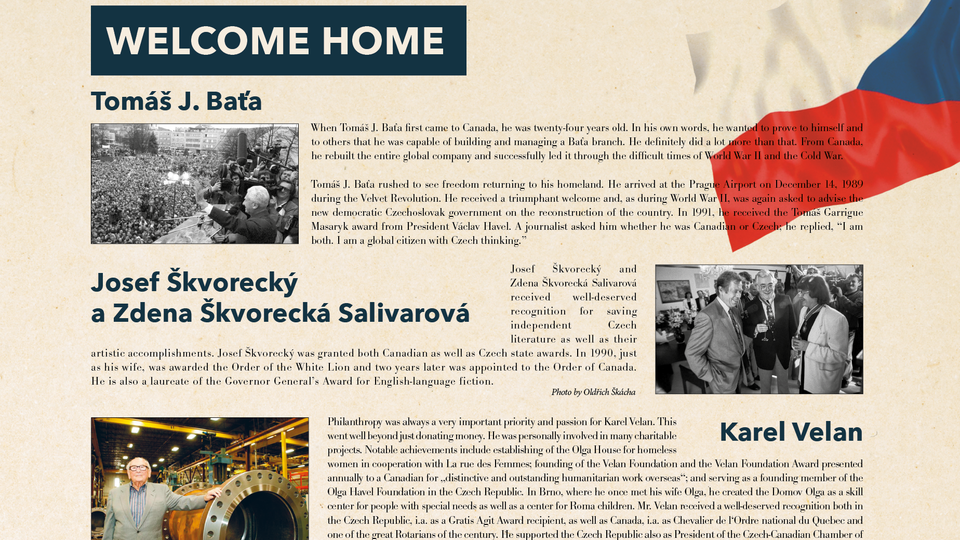 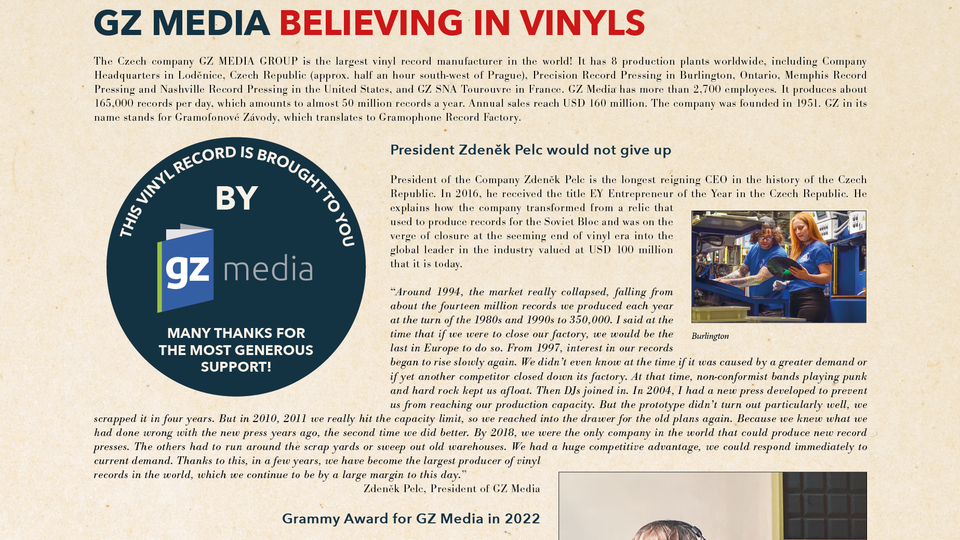 Is there something especially appealing about that interwar retro style of Czechia?

“I think that subconsciously there certainly is. I sometimes think about it myself. I think that as Czechs we are very proud of the First Czechoslovak Republic and we have good reasons for that. It was founded on humanism. Even the campaign to establish it, the fight together with the allies, was a fight for democracy and the values of humanism and the success of the First Czechoslovak Republic was overwhelming. We still are nostalgic for it and even during the communist times we were able to watch the old films from the First Republic, so I think that this has somehow stayed with us.

“But in regards to this project I would add that I also wanted to express our thanks to the oldest communities whose truly fabulous stories, that are again associated with these ideals, were unfortunately somewhat forgotten due to the 40 years of communism. Today, when I meet with these communities, often as the first Czech representative since the Second World War, I feel that we should make sure, and I am trying to add another part, that these communities know that the help of their grandfathers, great-grandfathers was not forgotten and that we still appreciate it. That is the underlying idea behind the project.

“Since I am returning to those early times and, because perhaps the biggest help that Canada provided was – in view of the numbers of immigrants – during the Second World War, I wanted to go with that era.”

The Traxler110 record can be listened to on the website: https://traxler110.cz/ The site also contains a biography of Jiří Traxler, as well as the digital version of the accompanying booklet looking into the history of Czechs in Canada.