Sociologist: When the situation becomes more dramatic the attitude of the public will change

Sociologist: When the situation becomes more dramatic the attitude of the public will change

“Catastrophic“, “alarming”, “dramatic”, those are just some of the adjectives used to describe the deepening coronavirus crisis in the Czech Republic. Politicians, doctors and data specialists have appealed to the public to adhere to the tight restrictions intended to help avert a disastrous scenario. However opinion polls indicate that a third of Czechs are still refusing to wear face-masks where they are compulsory and many consider the government-ordered lockdown to be over the top.

Why has the Czech Republic, which was deemed exemplary in the first wave of the pandemic, lost control and what will it take for people to start taking the coronavirus threat seriously? Those are some of the questions I put to sociologist Jan Hartl.

“Well the situation in the second wave is very different from that in the first wave. In the first wave this was something completely new and we could observe an increase in solidarity, cooperation and discipline. This time, although the situation is much more serious, people’s behaviour is different. Older people are very much afraid of the second wave and are very disciplined in adhering to the restrictions, limiting their social contacts and so on, while the younger generation does not seem to care much.”

What is behind the rejection of face-masks and other restrictions? After all, people have already seen what the virus can do in Italy or New York – so why do they find it so hard to accept that this is more than just a flu?

“The clue is loss of trust in the government and lack of leadership. We knew back in August that the second wave would inevitably come and the respective measures should have been taken well in advance. The problem was that there were elections due at the beginning of October and it seemed that politicians did not want to disturb the public with preventive measures, they issues a lot of confusing messages, there was a lot of improvisation and the result is that people are not taking it as seriously as they did during the first wave. Especially young people felt like the government was issuing orders that were unnecessary. There was a lack of effective communication for which politicians must be blamed. Our politicians are not used to explaining –carefully and constantly – what they are doing and why. So it seemed like they were saying – give us time for us to reach agreement and then we’ll tell you our solution.”

Is this reaction also to do with the fact that Czechs have always had scant respect for the authorities?

“Yes, that’s it. During the totalitarian years people survived by ignoring all kinds of authorities and all kinds of institutions. And even in the present day they have continued more or less rejecting all kinds of norms and measures taken by the authorities. It is a typical Czech trait – to evade direct instructions and look for backdoor solutions. But now the situation is very serious and that attitude has to change.”

So people do not trust politicians. But then who do they trust in this crisis? Anyone? 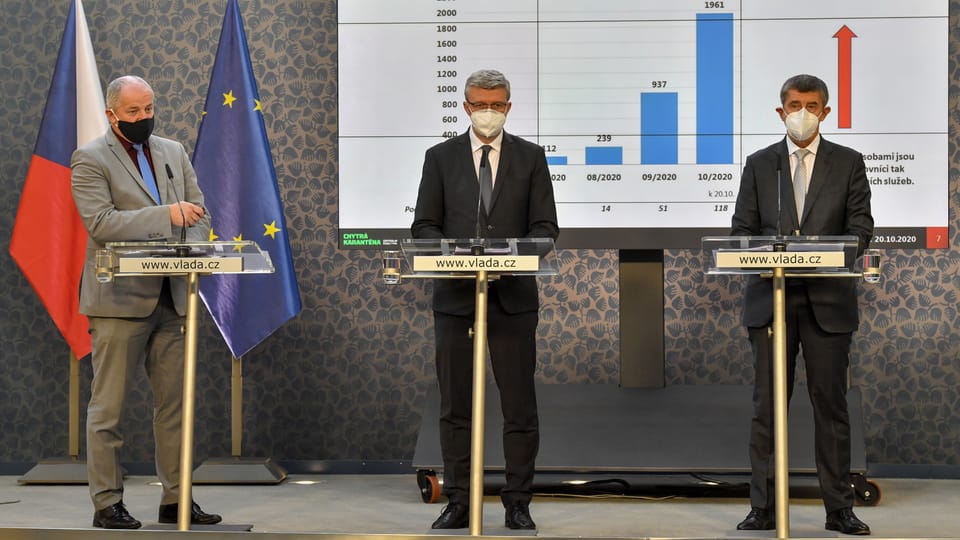 “That’s a good question. Normally you would suppose that if they do not trust the government and its experts they would trust the opposition, which would try to take an active role, but that is not the case. The government is weak in the eyes of the public, but the opposition is even weaker.”

What about doctors? Doctors have been ringing alarm bells – why don’t they trust doctors?

“Doctors are part of the confusion. Because there is not much consensus among doctors either on what measures need to be taken.  There were various actions by groups of doctors protesting against the measures that were taken. Generally people are willing to listen to experts and professionals, but this time it seems that every professional has a different opinion.”

What needs to happen for people to take this threat seriously? A soaring death toll?

“Unfortunately that seems to be the case and we are on the verge of a very dramatic situation. The data from the Czech Republic are very bad and you need to keep in mind that the data you have now reflect the situation that was here a month ago, so there are three to four weeks ahead of us that will be increasingly dramatic and when that happens I think the attitude of the public will change – but it will take some time.”

Where will the pandemic leave Czechs – how will it change their way of thinking, their behaviour, their lives?

“It has changed their lives already. If we look at the near past, people had no worries, they relied on the assumption that everything is good and would remain so, they felt they didn’t have to worry because things would be fine anyway. Now those perceptions of security are gone, people have come to realize that the situation could be very volatile, that they may have to be more active, possibly look for a new job, change their lifestyle etc. but for the present time there is just a vague feeling that something will change, but no one really knows what it is.”

So Czechs are waiting….

“In a way, yes. The Czech population generally is very passive. The society is relatively calm and stable and people are more or less passively waiting to see what will happen in the near future.”

Will a crisis such as this not boost inter-generational solidarity, as it did in the first wave?

“I think it will reappear, perhaps, but now we are in an in-between stage so to speak, in-between something which was in the past and will not return and before something new that will crystalize out of this uncertain situation.”

How may the epidemic influence people’s mental wellbeing?

“That is something that is not very visible to the eyes of a sociologist, but psychologists and psychiatrists say that more sensitive people are already reacting to the increasing stress and that it may effect large groups of the population.”

Can we use this test to our advantage? Can we get anything positive out of it?

“The good we can get out of it is more general. We live in the rich part of the world where we simply counted on things getting better and better, the outlook was of a stable economic growth and growing consumption, most people did not worry about the future. This crisis may – and I say MAY – lead people to re-think their values, but it is going to be a very slow process.”