Peter Sis’s On Flying and Other Dreams is one of the exhibitions of the year in Prague. It places in a fresh context five books focused on freedom by the US-based author and illustrator, including The Wall – Growing up Behind the Iron Curtain, The Three Golden Keys and Robinson. The show was conceived by the team of Michaela Šilpochová, Leoš Válka, Ivana Brádková at venue DOX, and at the opening I asked Sis what he had made of their approach.

“I didn’t expect this – I didn’t know what to expect.

“We spoke with Leoš [Válka] for years about books, about education, about kids, and it was never the right concept of how to do it.

“We were talking about some map of the world, but it was sort of shallow – it was like, Go to some exotic island…

“But with the whole change of media and how children approach the world, I sort of gave up on it – I didn’t know how to solve it.

“But obviously Leoš didn’t give up on it and he was thinking about it, and all of a sudden he came up with this idea.

“He said it’s going to be films and animation and blown-ups.

“And only sort of when I came here did I realise what the connecting factor is – and I’m pretty humbled by that.

“In a way, I agree with it, because I always try to have this subliminal or subversive message of freedom: blue skies, blues seas.

“But I’m really very impressed by what they did.” 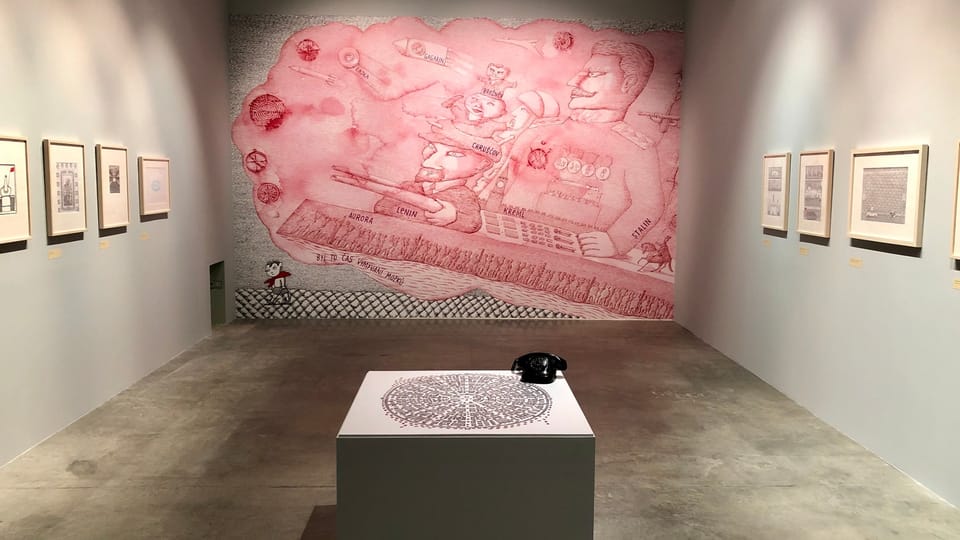 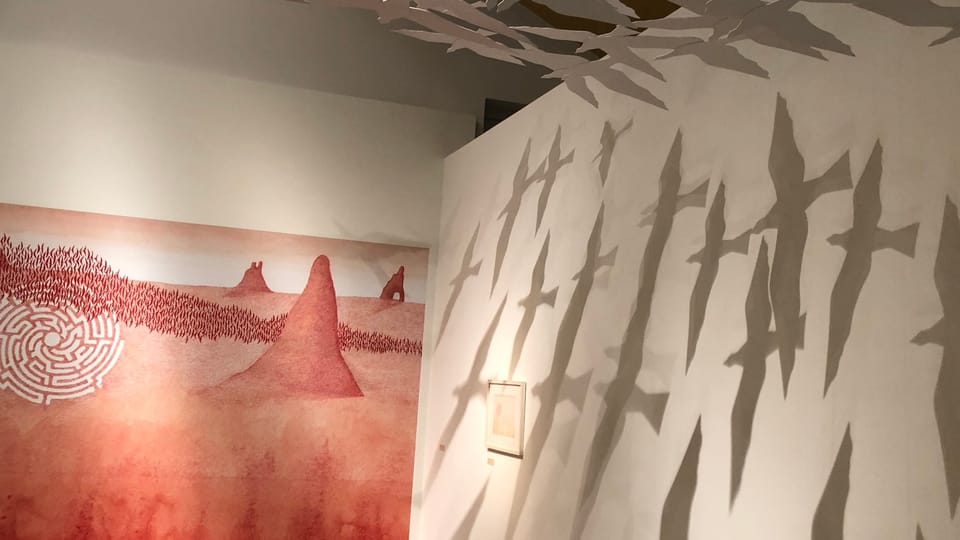 In a couple of months we’ll be celebrating and marking the 30th anniversary of the Velvet Revolution. Given the title of the exhibition, what are your strongest memories of flying back to Prague after the revolution happened?

“My strongest memories are about NOT flying to Prague.

“Because we came here, it was my first visit with an American passport, in September of 1989.

“I came with my girlfriend [Terry Lajtha], my wife to be, and we took a walk in Nerudova, outside of our house.

“I was telling her, it’s a warm September evening, there’s nobody anywhere.

“And all of a sudden we saw all these walking in the fog with backpacks and suitcases.

“They asked in German where the Bundesrepublik Botschaft was.

Photo: Ian Willoughby
“In no time we were leading a group of 60 people up Nerudova to Petřínské sady, and from behind the bushes came more and more people.

“And I thought, This is insane, something has to happen, somebody will come, this cannot go well.

“But we brought them all the way to the West German Embassy.

“They all got in – I would be very curious what happened to them since.

“We experienced this with Terry… It was somehow in the air: Hungary was coming.

“Then there was news [from Czechoslovakia] and I got three TVs; I borrowed two TV sets and I had all the networks at the time, with what was happening.

“Till today I feel sorry I missed [the gatherings on] Wenceslas Square and the event.

“And the first time I went back was only after Havel’s government came to New York [in February 1990]. That was the first government with people with long hair.

“People like [Michal] Kocáb and Joska Skalník and Magor Jirous were all part of this group.

“I remember going for a couple of beers with them. We went to CBGB’s and as the evening was progressing I gave them my children’s books for their kids, which they left behind.

The Wall – Growing up Behind the Iron Curtain, photo: Labyrint publishing
“So it was the time when I could actually have got some political post and I didn’t.”

In the exhibition here there’s one section dedicated to your book The Wall – Growing up Behind the Iron Curtain. You were saying during a tour for journalists that the book started selling more sometime after it came out. Why is that?

“It was a very highly awarded and recognised book in many countries, but as every book it’s got its time and at that time people were forgetting about the Cold War.

“But then suddenly with the Russian aggression, with Putin, with Ukraine, with Crimea, the sales to schools are up again, which in this case is a bad sign.

“Because I was talking about something which is gone and which will hopefully never come back and will never happen again.

“Yet lots of people are now are drawing links between the Russia of today and the Soviet Union of the past.”