Encore: Antonin Rejcha and Josef Suk: music for All Souls

Hello and welcome to Mailbox, Radio Prague's weekly programme where we read from your letters and answer your comments. Before we start, let me remind you that the winter broadcasting schedule starts this Sunday. There have been no major changes in our programmes but you can check out the details on our website www.radio.cz.

Last week we quoted from a letter from Mrs Angelia Beranek from Australia who complained about what she called "a lack of ethics and morality" in the Czech Republic. We've had quite a response to that letter since we aired it. This e-mail came from Stephen Conlin who lives in the English city of Bristol.

"I was shocked to hear Angelia Beranek's description from Australia of her time in Prague, making it sound like the Wild West. It seems to me that she has seen the city through the eyes of her husband, who was presumably a refugee from Czechoslovakia before 1989, and not as she wrote, a political refugee from the Czech Republic. The street crime that Mrs Beranek mentions is very distressing wherever it happens. My stocky brother, a former soldier in his forties, was attacked some years ago by a similar group on the Champs Elysees in Paris and lost his wallet.

"While it seems to me that one of these groups in Prague is targeting older visitors, especially on trams 22 and 23 in Mala Strana, the city generally seems a very pleasant and civilised place in which to spend time. No matter how wonderful and safe life may be in Australia, it can never offer the historical riches of Prague and the Czech Republic. As to the Czechs not wanting to work hard, they have always been recognised as inventive and productive: again I cannot believe what I am hearing from Mrs Beranek. The only negative thing that I will say about the Czechs is that they are always running themselves down..!

"I listened to the comments from the lady from Australia about the corruption issue in the Czech Republic. Prague is a large city not unlike many other large cities such as London, New York, Los Angeles, where these bad things happen as well. Nevertheless, I'm from Santa Barbara, California and my experience was quite the opposite. Of course I spent my time in Prague on Sunday during the day and did not experience any of the bad stuff. Of course I realize at night, just like any big city, the bad stuff begins to surface and one must take care.

"In Karlovy Vary I never had any problems and I worked near there, in Ostrov at Skoda, for almost a year (1995). I found the people very sincere and honest and I consider Karlovy Vary the Santa Barbara of Eastern Europe... In closing, I must say that the Czech people for the most part are well educated, sincere and honest, the Czech government needs to follow through with the same."

Photo: Dr. Shyam Sundar
Thank you for those comments - we are always interested in your impressions of the Czech Republic and especially what you think about the content of our broadcasts.

Two weeks ago in our interview programme One on One Jan Velinger's guest was ornithologist Lubomir Peske who's been involved for years in a project tracking the migration routes of black storks. Black storks from Bohemia have very different wintering grounds. While some fly straight to Africa, others take the longer route to Mongolia, Myanmar and India. And India is where this e-mail came from, sent to us by Dr K. Shyam Sundar:

Photo: Dr. Shyam Sundar
"Last year in November, I had an opportunity to attend to a juvenile black stork with a drooping wing. After X-rays, we knew that it had a coraco-scapulo-humeral dislocation with fracture ramus of furuculum. After conservative management with figure 8 bandage after closed reduction, the stork improved and flew away around three weeks later."

Having heard all that Latin it seems almost unbelievable the poor bird got over it but certainly we are very happy it's well again. And who knows maybe it came from the Czech Republic and is now back on its way to India. 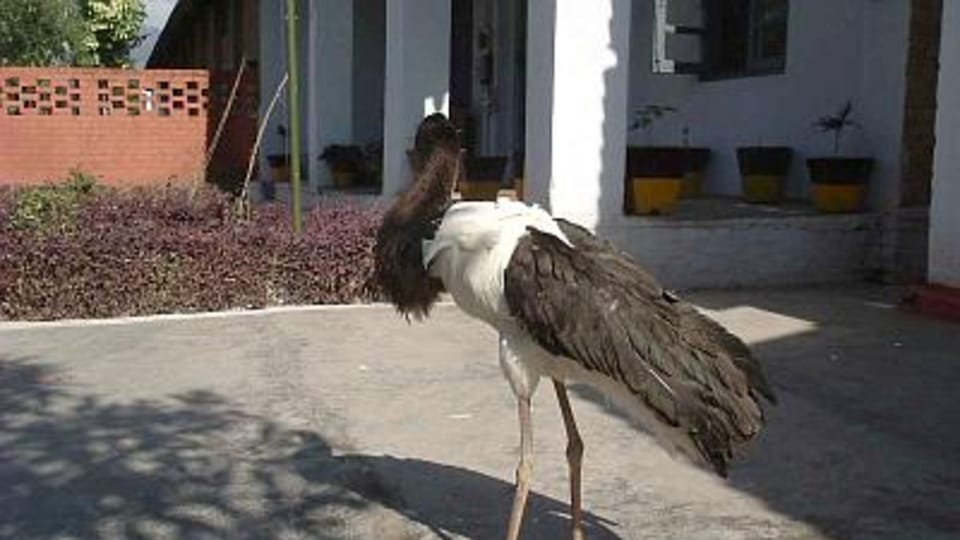 Although October is almost over, you still have two more days to send us your answers to our listeners' competition:

"We are looking for the name of a Czech-born rock musician - guitarist and songwriter. He was born in Prague in 1948 but in the 1960s he left for New York with his parents. At the legendary New York club CBGB's he met the ambitious and talented Patti Smith and the two of them started collaborating. Over the years, he played alongside some other influential rock artists, including Iggy Pop and John Cale. After the fall of the communist regime, he returned to his native Prague. At present, he is a songwriter, film composer and a sought-out producer."

If you'd like to win one of his CDs, please, send us your answers by Tuesday to the usual address, Radio Prague, 12099, Prague, Czech Republic or English@radio.cz