The EU Constitution is "christened" with beer on tap. A Czech is caught with a snake in his pants! Want to set a record? Pick up 500 kilos with your teeth -or drink 100 raw eggs in 9 minutes! Find out more in Magazine with Daniela Lazarova.

Ladislav Hanzel is hanging by the skin, photo: CTK
The main square in Pelhrimov was alive with a fun and games last weekend as the town hosted the 15th international festival of records and curiosities.

73 records were set in the course of the two day event which attracted over 15 thousand visitors. Possibly the most breathtaking and rather horrifying scene on the square was the sight of Moravian strongman Ladislav Hanzel / aged 45, weighs 130kilos/ getting his back pierced with 14 steel skewers and then being lifted by a crane to a height of ten metres above ground - literally hanging by the skin on his back. Ladislav set a new record, shrugging off the pain and telling the crowd that his wounds would heal in about ten days time.

Fifty two year old Petr Kocian spent 41 minutes in a tub packed with ice, Miroslav Helebrant turned many onlookers stomachs by drinking a hundred raw eggs in 9 minutes and 42 seconds, while Miroslav Pokorny managed to squeeze himself through an opening 28 times 16 centimetres big. Rene Golem Richter wowed the crowd with his strong set of dentures - picking up 506 kilo weights with his teeth and lifting them 10 cms. While Lukas Safranek put all his energy into blowing a giant soap bubble which closed around 15 kids. The bubble was close to 3 metres wide.

If you'd like to hear about something that you could try yourself then there is a fairly "safe" record that you can challenge without endangering your health and that is the decibel record achieved by clicking your fingers. When Miroslav Pokorny clicks his fingers you are not likely to overlook it - the sound was 110,4 decibels. Or you could try beating the number of straws that Lukas Safranek managed to stick in his mouth in one go - 160 altogether, each 53 millimetres wide.

Riding a bike from Prague to Karlstejn Castle is no big deal, people do it all the time. But riding a historic bike or "penny farthing" - one of those where the front wheel is miles bigger and you are high above ground is much more of a challenge. A group of penny farthing fans undertook this venture last weekend attracting a great deal of attention along the way. Owning a penny farthing is actually a rather expensive hobby - it costs from 60 to 120 thousand crowns. Of course not everyone uses it for day long outings - some owners preferred to join the one-mile-race or compete for the title of Most Elegant Biker. 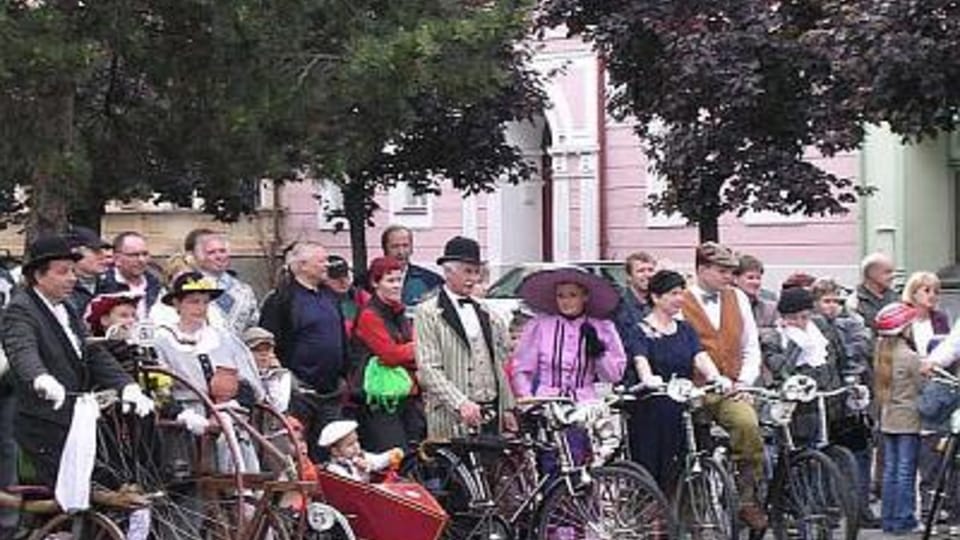 World Greyhounds Championship, photo: CTK
And talking of speed - and grace - last week the town of Mlada Boleslav hosted the World Greyhounds Championship. Greyhound racing was first established in Great Britain at the beginning of the 18th century, but it got to the Czech Republic much later -sometime in the 1950s. The European Greyhound Championship was held in the Czech Republic 30 years ago, but this country had never before hosted a world championship in this discipline. 350 greyhounds from 13 countries took part and although this is still a fairly young sport here in the Czech Republic, Czech breeders did not do at all badly -3 gold medals, two silver and three bronze. Germany won the most gold medals, bagging nine out of an overall twenty. A greyhound races at an average speed of 70 kilometres per hour.

The next time you fly somewhere - better take a good look at your fellow passenger and keep your eyes wide open. There are all sorts of loonies out there. A 32 year old Czech man flying from Tbilisi to Prague caused an uproar at Prague's Ruzyne Airport, when customs officers found he had made the journey with several snakes stuffed in his pants. He was moreover smuggling scorpions in his luggage. The man is in big trouble with the police, but doctors say he can still count himself lucky to have escaped without injury.

Actor Jan Kraus is christening the EU Constitution, photo: CTK
New books usually get a book launch - or as we Czech call it "a christening". The regulars at a frequented Prague pub - The Golden Tiger - decided that unpopular as it was the European Constitution also deserved a proper christening ceremony -especially since it might not be long for this world. The EU Constitution was christened with beer on tap, which pub goers swear to be a natural cure for most ailments. However in the case of the constitution they said there were no guarantees. It would really need a miracle.
Petr and Matej Forman, photo: CTK
The Forman twins - sons of the famous Czech born film director Milos Forman- are anchoring on Czech shores: to be specific on the banks of the Vltava river in Prague. And their boat is not just any old boat - it's a floating theatre where throughout the summer they will be hosting music groups and theatre and dance ensembles who do not have a stage to perform on. "This summer we will present several unknown theatre companies whose performances are first-rate, novel and refreshing but who unfortunately do not have a chance to perform them on stage," Petr Forman told the press. Although the "floating theatre festival" on the river is in itself a great and worthwhile project there is more to it - the money collected will be used to finance an eye operation for a small Afghan boy.

The west Bohemian town of Pilsen is currently enjoying a three day summer festival. Held from the 17th to the 19th of June, the festival includes music and theatre ensembles, dance groups, performances by fencers, jugglers, jesters and arts and crafts salespeople. The highlight of the event is a procession of ghosts which takes place on Saturday night. People have been preparing their ghost costumes for weeks ahead - and the organizers hope that they will make the Guinness Book of Records for the biggest ghost assembly ever. Over 3,000 ghosts are expected to turn up. So if you are anywhere near - feel free to join the ghost party. If you have no costume never mind - the organizers say that there will be stalls selling ghost costumes and people willing to do your make up on the spot. And don't forget your camera - chances are you'll never see so many ghosts in one place again!