The Czech lottery Sazka has announced a competition in making babies! How do Czechs envisage a perfect weekend? Are you a Karel Gott fan? You'll soon be able to visit Gottland! Find out more in Magazine with Daniela Lazarova.

Have Czechs acquired healthier eating habits? The signals you get may be somewhat confusing. The reason is that the eating habits of city people and country folk are getting to be very different. City people are likely to drop into a coffee shop for breakfast, eat lunch at a salad bar and have a microwave pizza with a glass of wine for dinner. An increasing number of them fail to sit down to dinner together as a family. Meanwhile country folk generally have less money and more time on their hands. They eat a big breakfast, take longer lunch breaks and have a hot meal for lunch and dinner in their own home. They favour the traditional Czech cuisine - a big hunk of meat, thick gravy, dumplings and beer. One would naturally assume that this makes city people healthier than country folk, but in reality both groups are in a bad way. City people have back problems, ulcers and varicose veins. Country people have high blood pressure high cholesterol levels and are often overweight. 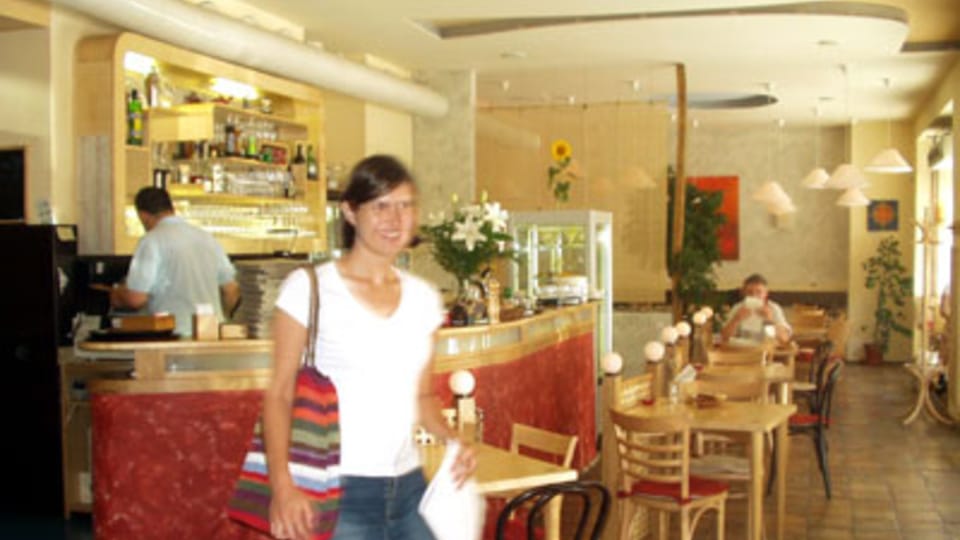 The villagers of Stary Plzenec in western Bohemia got a big scare last week when a huge truck without a driver made straight for the main square. The truck driver had stopped on a hill above the town and had got out without bothering to make the truck secure. The vehicle just started rolling and gathered speed as it went downhill. Luckily it crashed against a tree without harming anyone, but the danger was great. There was a school close by and if the truck had not swerved and crashed into a tree it might have ploughed straight into the main square where several dozen people were going about their business. "It's like being born again," one of the villagers told journalists. "The truck crashed some two hundred metres from us."

Some call him the Czech nightingale, others call him the zombie. Singer Karel Gott is a living legend and three generations of Czechs have grown up with his music. Even after the revolution, when open borders brought in tough competition and pop idol contests brought in fresh young faces, Karel Gott is still singing and selling CDs. He has fans in Germany, Slovakia, Russia, Poland, Belgium and Switzerland. Now he is about to get his own museum. An entrepreneur who recently bought Gott's villa in Jevany -dubbed the Czech Beverly Hills - plans to turn it into Gottland. The singer himself is said to be delighted with the idea and is actively helping to bring it about - making suggestions as to what could be included in the exposition that documents his life and career. Fans who come to Gottland will be able to see for themselves where their pop-idol lived for years - the bed he slept in, the study where he practiced his hits and the studio where he painted his pictures. They will even be able to taste Gott's favourite dishes. The singer himself will be present - large as life - in the form of a wax figurine which the mentioned entrepreneur is said to have secured from the Prague Wax Museum for a vast sum of money and, naturally, the villa will be filled with the sound of Gott's voice - singing his most famous hits.

The Czech lottery Sazka has announced a competition in making babies! To mark its 50 th anniversary next year the lottery has promised to reward all babies born on the day of its founding - September 15th - with ten thousand crowns. One lucky baby born on the day will get half a million crowns. "We want to mark our anniversary with a meaningful gesture and we think that helping the flagging birth rate in the Czech Republic is a good idea," Sazka's director told the media. Czech women have been alerted to the competition by an ad on TV in which a leading obstetrician tells them when to get to work on their baby. Ideally they should conceive on December 21st, but any date around that day could do the trick. So couples who want to go for it had better forget about last minute Christmas shopping and devote themselves to just one thing.

Ivana Trump with her mother, photo: CTK
Czech born Ivana Trump who paid a visit to the Czech Republic last week is said to have been enchanted by the latest fashion show of the Prague based Cuban fashion designer Osman Laffita. "I'll take them all" Trump reportedly said on viewing Laffita's 2006 spring-summer collection called Gypsy. Laffita first met Ivana Trump when she was here in March of 2002 and she has since been a regular client. Osman Laffita has lived and worked in the Czech Republic for 17 years now and his creations are popular with Czech TV and film personalities.

Maintenance work on the road between Davle and Stechovice has forced the inhabitants of Davle to resort to an unusual form of transport - they now use a river barge along the Vltava to get to work and back. "It makes a great change" twenty five year old Zdenka Mlejnska said "it would never have occurred to me to do this if the road had not been closed down. The trip takes about twenty minutes longer than it does by bus, but the experience of sailing up the river to work is worth it." Moreover people using the barge get a free ride because their city transport pass is valid for it. In three weeks time everything should be back to normal, but maybe the change will inspire some of them to use this form of transport more frequently.

Christmas is just three weeks away and many Czech towns and villages are now dressed in Christmas garb. The south Moravian town of Miroslavi has a special attraction this year - it boasts the biggest advent wreath in the Czech Republic. It took the locals a week to build and takes up much of the town's main square. With twenty metres in circumference and dozens of electric candles the wreath looks spectacular and has already made the Czech book of records.