Will Czechs take to purple potatoes? Who is the best cook in the Czech Republic? And, supermodel Eva Herzigova is planning to direct an autobiographic movie. Find out more in Magazine with Daniela Lazarova.

According to the Czech edition of Grand Restaurant just out, the best cook in the Czech Republic is Constantin Plesky, whose La Cambusa restaurant is absolutely the best place to go for sea-food. Constantin himself does not have any special training in this field. He opened the restaurant several years ago after a long career in construction and real estate. He is however a superb cook whose family has been in the restaurant business since the 16th century. His father, received training from chefs in Switzerland and France and he himself ran a restaurant in Tunis. Constantin's family opened the restaurant in a building they own in Prague and it is very select: a small staff and only open five hours a day - from 7pm till midnight. Yet the gourmets in town speak of it with reverence -and call weeks in advance to book a table. Food inspectors shake their heads in disbelief over how fresh the sea food served is - given that the Czech Republic is a land-locked country. Constantin himself says that this is the secret of his success. He has someone buy the produce at the fish market near Orly airport in France and within a couple of hours he picks it up at Prague's Ruzyne Airport. The secret is to keep the fish in the same temperature. "If it lives in four degree temperature in the water you need to keep in four degrees on the market, during transport - in short until you start cooking : then it tastes fantastic," the best cook in the Czech Republic says. Of course, he only uses butter from Normandy and Bretagne and he never touches greenhouse vegetables. "Cooking is my hobby and often when I get an idea for a new recipe in the middle of the night I'll get up and start cooking," Constantin says. He has served both President Vaclav Klaus and his predecessor Vaclav Havel and his regular guests are politicians, financiers and people from the arts world who are all greeted like friends. Constantin Plesky always recommends the best and he knows their likes and dislikes - as well as what the doctor ordered. "I would never give my guests anything I would not eat myself," he says.

Would you appreciate more colour on your plate? Czech scientists have produced a purple brand of potato and by the end of the year Czechs will be able to make purple potato chips, purple mashed potatoes or purple salad. The new brand of potato is not only colourful, it is said to be healthier than the usual yellow or red skinned potatoes. Although Czechs are not likely to see the new purple potatoes in their supermarkets in the coming months - those who are eager to try them before they come on the market will be able to buy them at agricultural fairs.

A group of Czech historic aviation enthusiasts have been working on a unique project - they are creating a perfect replica of the first plane ever made in Czechoslovakia - an Avia BH5 made in 1923. In the same year Czechoslovak sports pilot Zdenek Lhota flew it to Brussels where he won first prize at an international competition, wowing the crowd with his daredevil acrobatics. The plane was later used by the army for reconnaissance and the prototype led to the production of more advanced models. The mentioned group of historic aviation enthusiasts are putting together a fully functional copy which they too intend to fly to Brussels for an air show. "We didn't like the fact that there are no proper historic replicas of planes in the Czech Republic - and we wanted to change that," says the head of the project Milan Mikulecky. The group have been working hard for two and a half years now and the plane is almost finished. They are using the same materials and production technology as were used for the original. All this under the strict surveillance of the Civil Aviation Office, which will have to give the plane the green light before it can soar for Brussels. 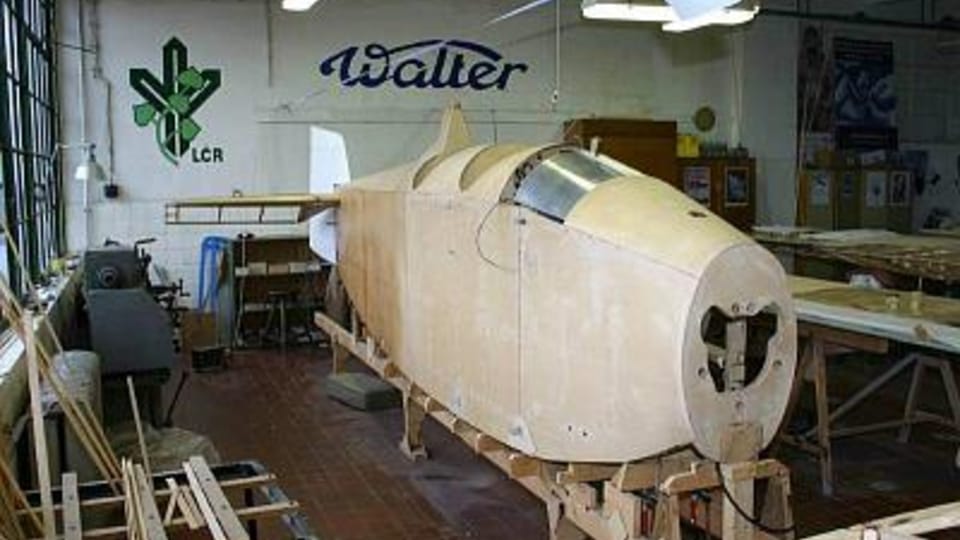 Photo: CTK
The new tobacco law which went into effect on January 1st is considered to be one of the most liberal in Europe, especially since it now allows smoking in restaurants during meal times, which was prohibited in the past. However it does ban smoking at bus, train and tram stops which happens quite often. Most people expected the police to turn a blind eye to smoking outdoors but the police surprised at least one smoker in the first hours of the New Year. A man lighting up at a bus stop on the outskirts of Prague - just hours after the law went into effect - was actually taken into custody. The police spokesman did not say how high a fine he eventually paid -the ceiling is one thousand crowns.
Dagmar Havlova on the stage, photo: CTK
Dagmar Havlova, wife of ex-president Vaclav Havel and a former theatre and film star, this week began rehearsals for what will be her first theatre performance in nearly a decade. She has a role in a Czech production of American playwright Israel Horovitz's "Park Your Car in Harvard Yard", which opens at the Na Vinohradech theatre on March 17. Called "Moment of Truth" in Czech, the play tells the story of the relationship between an ageing professor and his housekeeper. A member of the Na Vinohradech troupe between 1979 and 1997, Dagmar Havlova suspended her artistic activities shortly after her marriage in January 1997 to take up charity work. The 52 year old Havlova was an extremely popular actress before her marriage and has starred in dozens of films and television productions. She always said that she would return to the stage one day.

The Czech supermodel Eva Herzigova, who shot to fame as a Wonderbra model, wants to direct a movie about her life. The Czech papers describe it as a modern-day Cinderella story, after Herzigova herself made the parallel in one interview. But in actual fact the supermodel says she is not looking to direct a modern day fairy tale. She's reportedly aiming for a frank portrayal of her childhood in the eastern block, her life as a model and her brief marriage to the drummer of the rock band Bon Jovi. Like other models Herzigova has tried her hand at acting - you may have seen her as Picasso's wife Olga in Modigliani.