Nothing like a tomato battle to beat the blues! A keeper at Prague's zoo risks his life to save a baby gorilla -and a father and son catch a 36 kg big head on a white bread roll. Find out more in Magazine with Daniela Lazarova.

Photo: CTK
The town of Radvanovice held its 3rd annual tomato battle over the weekend.

Close to a hundred people of all ages took part with 13 tons of very ripe tomatoes at their disposal. Those who were eager for more could follow that up with a free for all in a tub of ketchup. "When we first saw it in Spain it looked kind of crazy but we decided to try it ourselves and you know what - it's huge fun," one of the participants said.

A park in Prague's first district has just been given a very exotic name - Rosh Ha'ayin. It's a name that few Czechs can pronounce correctly, much less spell - but it is official. The Prague 1 town hall said it had named the park after an Israeli town with which it had recently established ties and officials said they hoped people would get used to it. There has been plenty of interest from the media, but the locals are not enthusiastic about the new name. "It's not a very good idea - all the streets around here have Czech names and for many people here -especially the elderly inhabitants - Rosh Ha'ayin is simply too exotic to remember. No doubt people will soon give the park a name of their own liking and Rosh Ha'ayin will just be the official version" one of the locals told journalists. But then, you never know - so if you hear someone saying they are off to Rosh Ha'ayin - they are headed for Prague 1.

A Prague zoo keeper risked his life to save a baby gorilla from drowning last week. Moja - the first ever gorilla to be born in captivity at Prague Zoo fell into the moat surrounding the enclosure and was floating with her head down when the keeper appeared with their morning feed. "I didn't stop to think about the danger," Marek Zdansky says, "I jumped into the water to save her. Just a few years ago in the devastating floods of 2002 one of our gorillas drowned and it was I who found him. For a moment I felt a terrible dread that history was repeating itself. But when I pulled Moja out and shook her and she started screaming and I knew she was safe. It was then I realized that I was in big trouble - standing an arm's length from the group of gorillas who had watched the whole scene. None of them went in to help Moja because gorillas can't swim but they could have attacked me - especially the male Richard who weighs over 300 kg and who is very unpredictable. But they just sat and watched and seemed to understand that I was helping them. Then Moja's mother came and took her from me. She ambled away with her and I got out as fast as I could." It was Moja's first contact with a human being, just one day after her second birthday.

A father and his 13 year old son went on a fishing trip they will never forget. The fish they caught in Palava Lake in south Moravia was so big they fought it for a full forty minutes. "When the head first emerged we thought it was a huge catfish but then I realized it was a big head - a giant big head," Ludek Smrtnik says. The fish weighed an impressive 36kg and was 1m 29cms long. And you'd never guess what the bait was - a bit of white bread roll.

In just a few weeks' time visitors to Prague will be warned at every turn to be wary of pickpockets. More warning leaflets are to be put on trams and busses, stuck on Prague lamp-posts and even someone having a beer in a Prague pub will be alerted to the danger. The police has arranged for thousands of special beer mats to be printed with a warning in Czech and English which reads: Remember pickpockets are everywhere! The mat depicts a white handkerchief with one corner tied in a knot. Now this is likely to be a mystery to many foreign visitors but it actually refers to the Czech saying that you should make a knot on your handkerchief so as not to forget to do something - something along the lines of tying a string around your finger to remind you of something you wanted to do. Most Prague pubs have agreed to use the beer mats - so when you see one -you'll know what it means.

The Prague Town Hall is gradually restricting traffic in the city centre. But there are people who remember the days when cars and trams drove across Charles Bridge and Old Town Square without any restrictions. Traffic was first banned from Old Town Square - a ban that was imposed from one day to the next - in 1960 when experts found that trams in particular were doing serious damage to houses on the square and Celetna street. At the time, trams and cars were still driving across Charles Bridge. The bridge was made off limits to traffic five years later when the famous Gothic landmark underwent a major reconstruction. Tram lines were dug up and never replaced -and sometime later cars were banned from the bridge as well. People could hop onto a tram on Wenceslas Square up until 1985 after which traffic was gradually restricted - but now the city hall is seriously considering bringing trams back to the square. 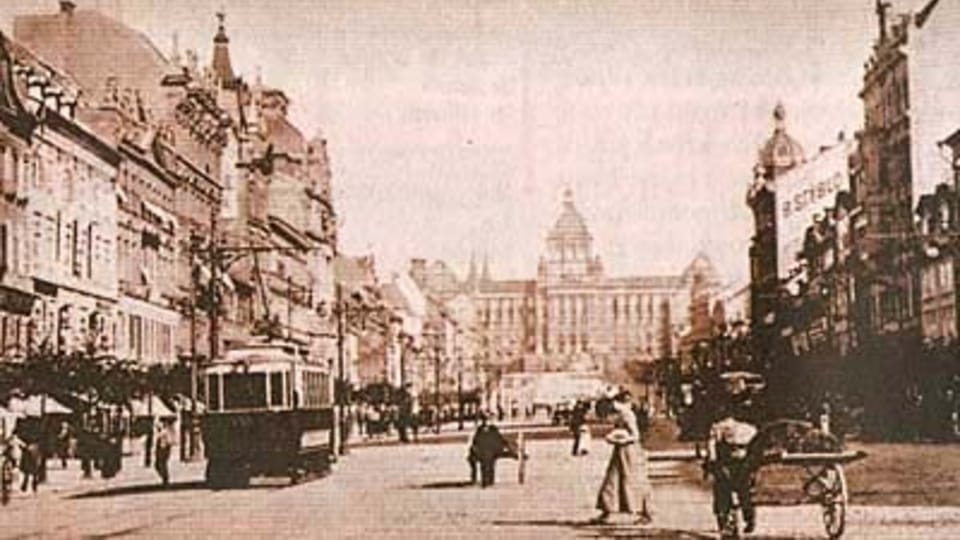 Photo: CTK
Madonna has big fans in the Czech Republic. Those who cannot afford a ticket to her Prague concert (the cheapest come at 6,000 Czech crowns ie. over 300 US dollars ) are willing to do just about anything to get one for free. Private radio stations are giving some out for free as prizes in various crazy competitions. In order to get her hands on a ticket fifteen-year-old Veronica Lucivnakova from Velke Mezirici covered her body with honey, rolled around in feathers then ran around the town square for an hour while passers-by gaped at her and photographers documented the event. "It was worth it - she told reporters later - I would do anything for Madonna!"

A homeless man who'd bedded down in a garbage container for the night can thank his lucky stars that he's still alive. The man was inches away from being sliced to bits by the rotating knife built-in the garbage van. The man was hidden beneath cardboard boxes and rotten fruit from a nearby outdoor market and would have escaped notice, were it not that the driver who has a camera in his cabin noticed a human arm moving amidst the garbage and stopped the compressor mechanism just in time. The homeless man, whom local officers have nicknamed Colombo, escaped with a broken arm and is now said to be back with his street friends - telling them how he escaped death by the skin of his teeth - moreover on a street called Soudni or Judgment Street.