Thieves get into the Prague Castle compound. Impressive micro-surgery: a man gets a big toe in place of a missing thumb. And, a bottle of rum may cost you 30,000 crowns. Find out more in Magazine with Daniela Lazarova.

Passengers on the Pelhrimov-Prague bus line were in for a shock last week. The 52 year old driver fainted and it was left to the passengers to bring the bus to a stop. Luckily two passengers sitting in the front seats saw him slump over and rushed to grab the steering wheel. "It was touch and go" one of them said later. "The bus was going at fairly high speed and it took us a while to get to the brakes. So we wrestled with the wheel over the driver's body - we first drove onto the pavement and hit a wire-fence but then we swung the bus back on the road and stopped it after a bit." Apart from shock nobody suffered any ill-effects but it is a ride that none of the thirty passengers are likely to forget in a hurry. And the lesson to be learnt from this story is - if you are boarding a bus - or train - it's good to know where the brakes are.

Thieves get more daring by the day. The days when Prague Castle was considered an impenetrable fortress are over. Last week two thieves managed to get into the Prague Castle compound in the dead of night and break into a jewelry shop in Zlata Ulicka. Not only did they get in but they escaped with the loot without any of the Prague Castle guards noticing. They were alerted to the theft on the next morning when the owner called the police.

Czechs who have money to burn can now spend it on another luxury product - a new ultra-premium extra-aged rum. There aren't many places where you will be able to can get Havana Club Maximo Extra Anejo- a limited line of what is supposedly the best rum in the world. It will be on sale in just nine countries of the world and the Czech Republic is among them. Maximo was presented to the Czech public this week by Don Jose Navarro and will be available in the country's most exclusive restaurants. A bottle - designed and hand blown by the British glass designer Paul Miller - will cost you 30 thousand crowns (1, 300 US dollars) - and you'd better hurry because only 20 bottles of Havana Club Maximo Extra will be on sale in the Czech Republic this year.

The days when kids couldn't wait to build a snowman when the first snow fell may soon be a thing of the past. A certain firm is putting inflatable snowmen on the market which it expects to become a Xmas hit. It's a sorry state of affairs for someone who has spent their youth doing the real thing - but kids today don't seem to mind. The firm in question says it has sold hundreds of thousands of inflatable snowmen abroad in past years and when it put 300 of them on the Czech market last year they sold like hot cakes. Of course, there are a lot of skeptics out there who scoff at the idea but people were equally skeptical about the sale of artificial Xmas trees a few years ago and now every other family has one. So the time may come when kids who want to have a snowball fight will first go to buy artificial snowballs at their corner store.

Borek Bulicek has a passion for ambulances - real ones and toy models. After the revolution he set up his own private ambulance service and has devoted himself to expanding both his real and toy car parks. When he set up his company he had just two ambulances - now he owns 18 which are on the road every day as well as two very special veterans which are only aired from time to time. One is an armored personnel carrier ambulance of which he is particularly proud. "It is a self propelled amphibious vehicle that can cross water and the roughest terrain - it will get to places which are not accessible by helicopter" Bulicek says. The other is a Skoda veteran - an old ambulance used in the 1950s which he himself repaired and which he shows off at veteran get-togethers. As for the toy models that fill his living room - they come from all over the world and he has more than 700 in his collection. 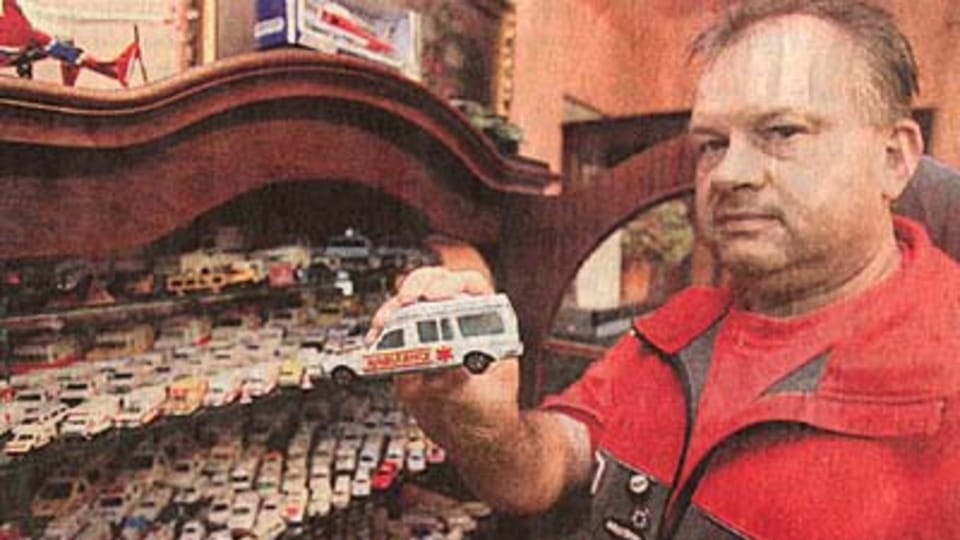 The Prague 4 town hall authorities have their own way of fighting against graffiti art. They have invited children from primary schools in the district to bring out their paint-brushes and paint underpasses and other areas which are usually targeted by graffiti artists. The district's underpasses are thus the most colorful in the entire capital. Unlike the grey and drab ones elsewhere, the Prague 4 underpasses each take you into a different fantasy world - a beach, an underwater scene, a garden, a jungle, a zoo, a work-place and even a lift.

Doctors in the town of Zlin performed a unique operation last week. They successfully transplanted a patient's toe onto his right hand where it is to serve as a thumb. The 57 year old patient lost all the fingers of his right hand in an accident and only two were recovered and successfully re-attached. The missing thumb however would have made it difficult for him to pick something up or hold anything. So he asked doctors if they could use his big toe as a replacement. Not only was the transplant successful but doctors have managed to reconstruct the patient's big toe. The method which was first used by the French specialist Guy Foucher is called "twisted two toes" - but the end result is of course much better than the name suggests.

Stanislav Penc milks a goat in Goats' Place, photo: CTK
It's a small square in the centre of Prague - just off Old Town Square - and it is the site of a raging battle between several goats and the father of psychoanalysis Sigmund Freud. The dispute concerns plans to erect a statue of Sigmund Freud on the square sometime next year. However the square itself has always been known as Goats' Place and several goat-advocates from the Friends of Goats Society have now come forward to say that while Freud deserves to have a statue in Prague it should not be at the expense of this most deserving animal species. They insist that only a statue of a goat is fit to stand on the square and to press their point home they organized a demonstration attended by several goats. The Friends of Goats Society claims that goats should be protected in this country since their number has dwindled from an estimated 1.5 million after WWII to around 18,000 in the present day - which, the society says, viewed percentage-wise is a sharper decline than that in the world population of whales. The goat advocates are planning to open a goat museum in Goat Street which leads off the square -and they say they are ready to do battle for goats' rights. "If Freud's statue is not placed somewhere else we will come back to protest with more goats" - the head of the society Stanislav Penc told journalists. He alone owns 29 goats - so he's probably not bluffing. It would be interesting to know what Freud would have to say about all this -or any member of the goat species for that matter.
Author: Daniela Lazarová
tag:
run audio