A kangaroo on the run steals the limelight from Santa outside a Czech shopping mall. What's to be done with Stalin and Lenin? And, could you pass through the narrowest street in the Czech Republic? Find out more in Magazine with Daniela Lazarova.

Shoppers outside a Brno shopping mall couldn't believe their eyes last week when they came face to face with a kangaroo which was hopping around outside the mall apparently enjoying the morning sunshine. "We thought it was a hoax call," said a local officer who dealt with several calls from the public. Nevertheless a couple of officers grabbed a net and set off to investigate. When they arrived at the mall the kangaroo was still there -and allowed himself to be caught fairly easily. He had escaped from a private owner and actually crossed a three meter wide river to get to the mall. Whatever he thought of the outing - he certainly got plenty of attention - totally overshadowing Santa as children crowded around to see him. However his owner has now bought a new fence so it'll most likely be a while before he's able to give a repeat performance.

Elsewhere a wild boar left the relative safety of the woods to investigate life on the other side of a main road and paid the ultimate price. He scared the wits out a few drivers as he crashed into four cars in succession before being killed by the final impact. The incident happened near Karlovy Vary in the western part of the country. It is an area where you often get boar and wild deer running across the road - and there are warning signs up in many places - but in a case like this there's really nothing much you can do.

They once had pride of place - looking down on the world from their pedestals. Today they are shunted around, covered in moss and nobody knows what to do with them. I'm talking about the many statues of communist leaders which once stood on the country's main squares. The town of Olomouc is one of many which has failed to sell its communist statues to private collectors and so Stalin and Lenin gather moss in the backyard of the local museum. The town hall says they belong there - the museum doesn't want them. Now there is a debate underway as to whether they could not be turned into something useful - like corner stones.

Nativity scenes are an important part of the Czech Christmas tradition and towns and villages vie whose will be better on a given year. Some villages put their own inhabitants in their nativity scene - they go to their local woodcarver and commission a figure of a family member or friend as a surprise present. The local chemist is there with his medicine bottles, the teacher surrounded by children, the baker carrying a loaf of bread, and so on. And with every year the nativity scene gets bigger. However this year's big surprise is a musical nativity scene where the individual figures talk in between carols. It was created by Jaroslav Fejfar from Belohrad. Mr. Fejfar spent years perfecting it and when he added two elderly women gossiping he got an idea. "They looked so real it seemed I could almost hear them talking," Mr. Fejfar said - "and then I thought - well, why not?" He wrote a little play for his nativity scene and the dialogues were read by members of the local theatre ensemble. He also got an electrician to wire up the scene so that when a figure says something it is automatically spotlighted. The nativity scene is believed to be the only one of its kind in Europe - for the time being of course -because other Czech towns will definitely want to go one better next year. 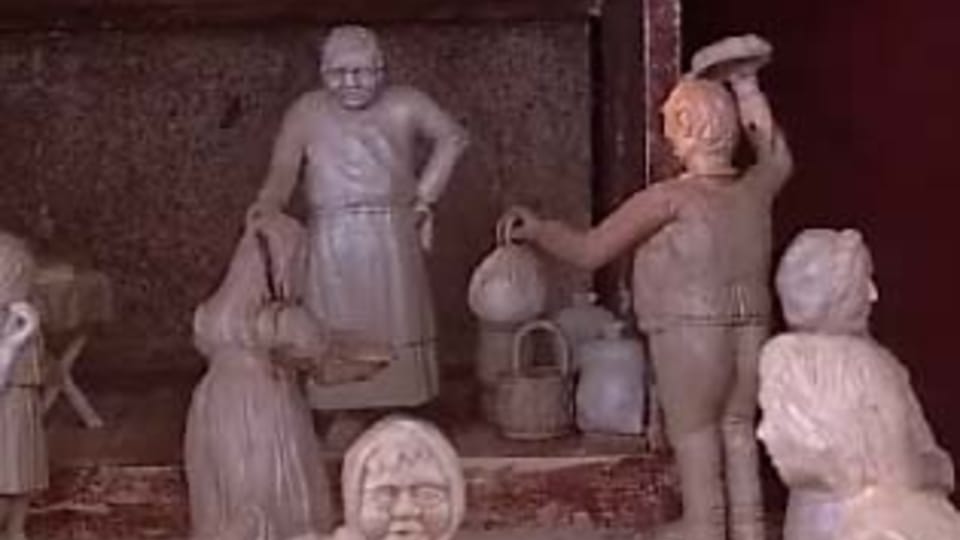 Two Czech teenagers from Horni Jircany near Prague went on a big joyride this week. Eighteen year old Tomas took his parents silver Peugot without permission and together with 14 year old Vojtech the two set off for a trip to Africa. Neither has a driver's license. They disappeared at around midnight and their parents discovered their plans when they went into their son's computer to try and find some indication as to their whereabouts. To their amazement they found detailed travel plans - with the ultimate destination: northern Africa. With 15 thousand crowns and 500 euros between them they could have got quite far. However the police had the car's license plate and the two boys were arrested in Greece several days later. They are now being sent back home.

The town of Kadan in north Bohemia boasts the narrowest street in the Czech Republic. It is called - rather unnervingly - The Executioner's Street and dates back to the 14th century. It is 51 meters long and just 64 centimeters wide. It is basically a very narrow stone passageway linking two parallel streets and at night it can be quite creepy.

Nowadays many people find it hard to imagine not spending a few hours after work at their computers. But what did people do before computers appeared on the scene? The historic town of Cesky Krumlov has organized an exhibition documenting how people enjoyed themselves a century ago. The exhibition shows both the pastimes of the nobility - such as hunting, a variety of sports, visits to the theatre, singing, needlepoint or painting and those of the commoners - such as story telling, singing and a variety of board games. The exhibition's curator says that although many of us may find the options of a century ago boring or restricted - those days have one undisputed advantage - people spent a lot more quality time together and communicated far more than they do today glued to their computer screens.

How many Czechs would be willing to work as a cleaner, a cook or construction worker? According to statistics those back-breaking jobs are increasingly going to workers from the east -and, if Czechs are willing to do them at all they want to do so in western Europe where they would make far more than they would at home. For instance a cook in the Czech Republic will make on average 12 to 18 thousand crowns - while a little further west - in Germany for instance he would make the equivalent of 52 thousand crowns. So the choice is obvious and those who go abroad to make money work hard. The overall amount of money that Czechs working abroad send home is huge - an estimated 30 billion crowns - which amounts to 1 percent of the country's overall production.