How do Czechs test their ski-lifts? With beer of course! Czech bears stay awake to enjoy their first ever Christmas! And, spilt chocolate all over the D5 highway gives maintenance workers a hard time. Find out more in Magazine with Daniela Lazarova.

Jested, photo: Barbora Kmentová
Czechs are inordinately proud of their excellent beer and many beer lovers will tell you it has many uses. Some insist that it is beneficial to one's health because it is chock-full of B vitamins, in the past women used it to give their hair greater volume and there is even a beer spa in the Czech Republic where beer will allegedly rejuvenate your mind and body. But beer is also used where you would least expect it - such as to test the country's new ski-lifts. Last week 330 beer barrels - weighing 20 tons in all - took a ride on the new Jested ski lift as a final weight test before it could be put into operation. The test passed without a hitch and after that picturesque ride up and down Jested the barrels were distributed to pubs in the region. Most people who buy a pint in the coming weeks will most likely be unaware of the fact that their beer has seen more of the world that the regular trip from the factory gates to the pub.

While the country's winter resorts are desperately hoping for snow - people who like a milder winter are making the best of the unseasonable warm weather that had spring flowers blooming on Christmas day. Although reports about blooming trees and flowers have been coming in from around the country - the one which topped them all came from the town of Rokycany on Christmas day. Ten cherry trees were in full bloom on the town's main square creating a colourful circle around the decorated Christmas tree. The locals say there's never been anything like it in living memory. Many of them said it was like a very special Christmas gift. Practically everyone in town has had their picture taken with the cherry trees and Christmas tree in the background to show to disbelieving future generations. But then you never know - it could be a taste of what future Christmases will be like.

At this time of year you'd expect bears to be fast asleep but the warm weather is keeping them wide awake and active. Three bears living in captivity on the premises of Cesky Krumlov Castle are still keeping visitors amused with their antics and demanding proper meals for the performance. Since they are wide awake their keeper Jan Cerny decided to give them a proper Christmas for the first time ever. They got a Xmas tree decorated with real apples, strawberries, grapes and other fruit which they promptly "dismantled" and consumed. "Fruits are a big favourite with them and it was a treat to see how much they enjoyed them," their keeper said. "This is the first year in December when they are not fast asleep - so we are just going with the flow and we'll see how things turn out." Well, now that they know what they are missing maybe he will never get them to bed down before Christmas again!

It's every child's dream - chocolate whichever way you look. And I'm not talking about a film scenario but an accident on the D5 highway last week. A truck carrying liquid chocolate from Poland went into a spin and overturned spilling hot chocolate onto the road. The chocolate was being transported at a temperature of around 45 degrees and despite the relatively mild weather it quickly started to harden. "It was a critical situation," an emergency worker said. "There was chocolate everywhere and the truck was blocking the entire highway. But the main thing was that with 20 tons of chocolate starting to solidify inside the truck we knew we had to turn it over fast before it got too heavy to be moved". Three cranes had to pull simultaneously and took a full four hours before they had the truck the right side up. No wonder chocolate makes you heavy!

The last day at school before the Xmas holidays is always special - most schools forget about lessons and have a party instead. Some a traditional Christmas party with carols and presents - others a disco. The female staff of a school in Zlin decided to go one better this year and give its students an unexpected Christmas present - a parody in which male students or colleagues dressed up as "schoolmarms" and took charge for the day. All of the regular staff contributed old clothes, wigs and cosmetics. "She's great - except maybe she should shave her legs," one of the kids commented, looking at a pair of very hairy legs in stockings and high heels. The day was such a success that the school is considering a repeat performance next year.

Czech drivers do not have the best reputation in Europe. The police are trying to change that using the "carrot and stick" approach. The "stick" is a much tougher road law which went into effect earlier this year. But the traffic police occasionally show a kinder face as well - in some Czech towns the traffic police decided to take a benevolent stand towards drivers who broke the new road law during the Christmas holidays - not speeding of course but bad parking and other smaller offenses. "People are just not themselves at this time of year, it's complete chaos and they will park just about anywhere to get a last-minute gift or pick up their Christmas cookies from the bakers," an officer explained. And, in South Bohemia, the traffic police issued the first ever "Gentleman of the Road" certificate to Vladimir Wasserbauer, a young man who risked his own life to save the passengers of an ambulance which had a bad accident. The ambulance went into a skid, crashed and overturned several times before bursting into flames. Vladimir Wasserbauer jumped out of his car, grabbed his fire extinguisher and fought the flames before pulling out the driver, doctor and patient. "Anyone would have done the same," he said upon receiving his "Gentleman of the Road" certificate, but the traffic police are not so sure and just hope that other drivers will follow his example. For the present time, Mr. Wasserbauer is rather the exception than the rule and if the police were to hand out anti-prizes for drivers who are a hazard to everyone else - they would have their hands full doing just that. 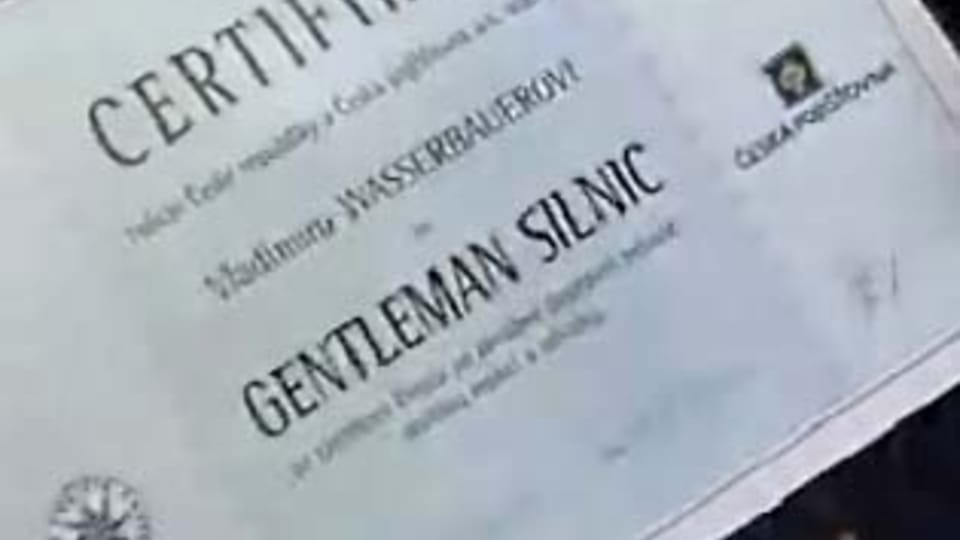