A unique find has been unearthed in the Orthodox Church of St. Peter and Paul in Karlovy Vary, a little Scops owl strays to the Czech Republic and Czechs gather to see a rare sight - a perfect replica of a historic train built in 1891 for the Austro-Hungarian Emperor Franz Josef I and his wife Elisabeth. Find out more in Magazine with Daniela Lazarova.

A crowd of people gathered at Prague's railway station last week to see a rare sight - a perfect replica of a historic train built in 1891 for the Austro-Hungarian Emperor Franz Josef I and his wife Elisabeth. Once you step inside you know immediately that this train was not made to carry ordinary mortals - everything is upholstered in brocade, the seats all have foot rests and satin pillows. Beautiful antique lamps, Oriental carpets, gilded mirrors and framed photographs give you the impression of being in a royal boudoir rather than a train. Many of the articles are authentic and were actually used by the royal family. There are nameplates above the seats of the emperor and his royal consort, brocade curtains, crystal glassware and silver cutlery. Twenty waiters in uniform are present in each wagon ready to fulfill any request and pamper passengers. The dining 'hall' is perfection and the chef will whip up a five course meal at your request. Each table in the dining compartment has a name - one of the cities of the Austro-Hungarian Empire. The replica of the emperor's train was made by a private firm in Vienna fifteen years ago for people who want a taste of nostalgia and are ready to pay for the best that money can buy. Anyone interested in taking a ride can do so - but they must book the whole train and do so well in advance. A five hour ride in the Emperor's private train will cost you the equivalent of one million crowns. As for the authentic train built in 1891, only the dining wagon was preserved. It was later used by Czechoslovak presidents and is now on display at the Technical Museum in Prague. 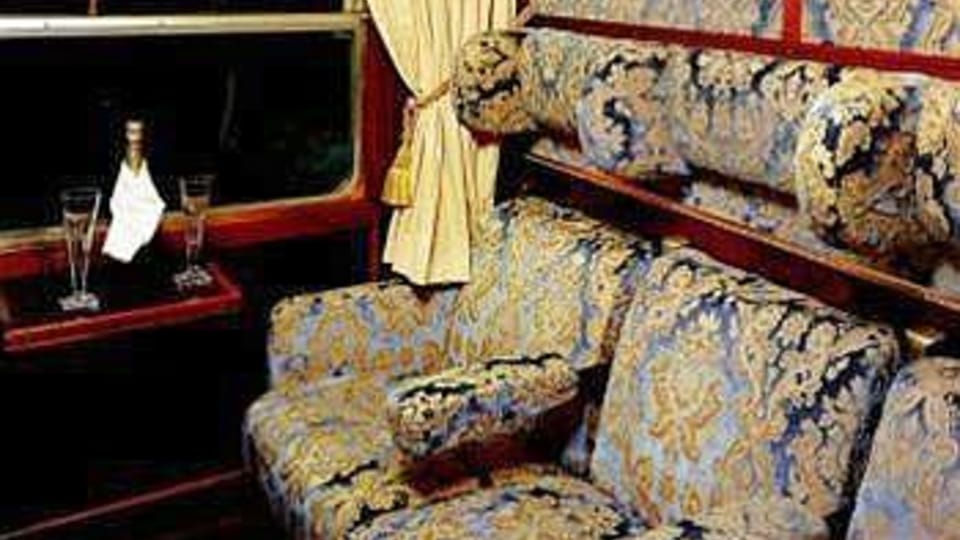 With an average height of approximately ten centimetres the common Scops owl is the second smallest breed of owl in the world. Far from being common - it is very rare in central Europe. Its home is the Mediterranean, from where it rarely strays. However one little Scops found its way to the Czech Republic recently to the great delight of nature lovers. It is the first ever Scops registered living in the wild on Czech territory and it would most likely have escaped notice were it not for the fact that it was found slightly injured and needing help. Ornithologists say it is now on the mend and should be released within a week at the latest. It is not clear why the bird had strayed to these parts but it was found close to the home of a private owner who breeds owls, including common Scops, in captivity. Ornithologists say that the one in the wild may have stayed close after hearing calls from the same breed.

The traffic police in the Zlin district couldn't believe their eyes recently when a huge feathered bird whizzed past them on the motorway. They gave chase and soon caught up with the offender - a young man was riding a motorbike completely covered with bird feathers. He had won a silver medal with it at a local competition of crazy bikes. "The feathers are not a problem," - the officer said - "but he wasn't wearing protective head gear - and he'd been drinking. Birds on the motorway have to respect regulations the same as everyone else."

Shearing lamas, especially in hot weather, is essential to their health. Zoos do it regularly. But this year the zoo in Olomouc decided to do something more for its herd of lamas. Looking to the United States for the latest in lama fashion - the keeper had them sheared like elegant giant poodles. The keeper says that the new style is what lamas currently sport at international competitions - and the animals seem fairly happy with their new look. However parents now have a hard time convincing their three year olds that they are not looking at an overgrown poodle.

How big is the biggest jigsaw puzzle you have ever put together? Fifty-five-year-old Anna Pocarovska holds the Czech record in this discipline. She has just completed her biggest puzzle ever - which is three and a half meters wide and is made up of 18 thousand pieces. It took her six months to complete, putting in four hours every day. Anna says her family originally complained about the fact that she was spending all her free time working on puzzles - but gradually they came to accept it. "In fact now when I am in between puzzles and have time to nag them my daughter says - time to get mum another puzzle," Anna laughs. She has 29 huge puzzles framed at home - among them a painting of New York as "the city that never sleeps".

Offer a Czech frogs' legs and they'd most likely make a wry face. But archeologists digging at a site east of Prague have uncovered a find that suggests that frogs' legs - not dumplings - may have been staple food for the local population five thousand years ago. They uncovered some nine thousand bones most of which were clearly the remains of frogs legs that were roasted on an open fire around which they were scattered, one of the archeologists said. This particular feast must have taken place in the spring when frogs migrate to water and would have been easy to capture in large numbers. Such finds are usually restricted to France but archeologists say that thousands of years ago frogs may have been on the menu across Europe - though rather than being a delicacy they would have been considered quite common - the easiest dinner one could catch.
Author: Daniela Lazarová
tag:
run audio