What is the one thing that infuriates Czech tennis star Nicole Vaidisova about her compatriots? Why was the Czech health minister forced to eat hospital food and, the Czech student who is cleaning up Taiwan. Find out more in Magazine with Daniela Lazarova.

Nicole Vaidisova, photo: CTK
What is the one thing that infuriates Czech tennis star Nicole Vaidisova about her compatriots? The outspoken 14th seed, who appeared on a Czech talk show last weekend, said it was plastic bags. "I really don't understand why Czechs have to carry them around all the time," she said on the show. "It's grand to have Czech fans around, but I wish they would leave those paper bags at home. They'll sit in the third row and throughout the game - when I'm trying to concentrate - I hear them rusting the paper bag - taking out an apple, putting something back in - it's crazy." So remember - if you are off to root for Nicole Vaidisova wherever she happens to be playing - don't forget to leave your plastic bag at home for the day. She'll love you for it and you may even help her win the game!

Ministers rarely have cause to complain about the food they get served. Restaurants bend over backwards to please an important client and the food at receptions is not the worst either. But this week Health Minister Tomas Julinek got a taste of what patients get served in Czech hospitals - and the grimaces he made while tasting the food said it all! The most popular Czech daily Mlada Fronta Dnes decided to test the food that ten Czech hospitals serve their patients - one sample of each dish was sent to a lab, another to a panel of dieticians and the third meal was served to the minister who's agreed to take part in the experiment. The day after the experiment the minister was the paper's front page -grimacing - as the waiter served up yet another hospital specialty. "The mashed potatoes are really disgusting and the meatballs taste like mud" the minister protested. The panel of dieticians was equally appalled - the food was not only bland but the meat was low quality - often minced meat or sausages - and fruit and vegetables were scarce. "If the patients are not already ill - this should do the trick" one dietician said. As for the lab - they found bacteria in one of the dishes. The hospitals tried to defend themselves by saying that you couldn't do better on 60 crowns per meal -which a chef promptly disproved. The minister is still recovering from the appalling experience of tasting the food that patients are given every day, but not everyone is sympathetic - I don't see what the fuss is about, former health minister David Rath told the daily "people go to hospital to get well, not for a gourmet experience". Well, in this country they certainly don't.

Photo: Zoo Dvůr Králové nad Labem
The Dvur Kralove Zoo is fighting tooth and nail to save the precious white rhinoceros from extinction. Last week two white rhinos were artificially inseminated at the zoo and vets are now hoping for a miracle. Zoologists at Dvur Kralove have been encouraged by the experience of their colleagues in Budapest where a rhinoceros gave birth in January after artificial insemination. "With a white rhino it may prove harder, but hope is always the last thing to die," said Jana Mysliveckova, spokesman for the Dvur-Kralove Zoo, adding that it should be known "in the next 30 or 40 days" whether the insemination had been successful. The white rhino, indigenous to South Africa, has come close to extinction due to poaching. Only eight northern white rhinoceros live in captivity in the world today -- six at Dvur-Kralove, in the centre of the Czech Republic, and two at the Wild Animal Park in San Diego, southern California. Some 30 others were recorded in 2000 in the Garamba national park in the northeast part of the Democratic Republic of Congo, but their fate is in question due to conflict in the region.
Tatu with her mother Kijivu
While the Dvur Kralove Zoo lives in hope, the Prague Zoo has announced the christening of the third baby gorilla born in captivity at the zoo. The second, which was expected in may of this year unfortunately died at birth. This one has been named Tatu - which means three in Swahili, and is equally suitable for a boy or girl. It is too early to say whether it is a male of female - but we are happy that it is doing fine, the zoo's spokesman said.
Daniel Hradsky, photo: www.chinapost.com.tw
Sometimes a foreign country is so beautiful you've got to clean it up! Daniel Hradsky, an exchange student from the Czech Republic is helping to clean up Taiwan's environment after falling in love with the country as soon as he set foot in it. Over the past five months he has visited Taipei, Tainan, Kaohsiung and Kentin as well as Taitung and Hualien, picking up garbage along the way. "Taiwan is incredibly beautiful and its people are very kind and friendly to foreigners but they are truly litter bugs," Daniel said. He recalled that his girlfriend in the Czech Republic was a conscientious "garbage collector" who would pick up litter on the street because she could not bear to see it lying there. At the time, he'd considered her actions meaningless, but to his surprise shortly after arriving in Taiwan Daniel started doing the same -picking up litter on the streets, in the mountains and on the beaches. He says his actions have inspired his Taiwanese classmates and friends to do the same. Well, one thing's for sure - when his study stay in Taiwan ends he will have no shortage of litter here in the Czech Republic.

As every summer Prague is currently hosting an exhibition of modern art called Sculpture Grande. This year's exhibits present the work of seven artists from around the world and all are intended for open air spaces - turning the centre of Prague into an art gallery for the duration of the summer. Among this year's exhibits are Sylvie Fleury's "hallucinogenic" mushrooms in chromatic colors which you will find on the Old Town Square, Stephen Balkenhal's The Dancer - a ballerina standing tip-toe on a ball on Dlouha Street and possibly the most popular of all -Jean Jacque Ory's "Venus and the Shoe" -a huge white high-heeled shoe with Botticelli's Venus painted inside. The shoe is constantly surrounded by admirers who pose next to it for an original holiday snapshot. The exhibition is to last until September 30th. 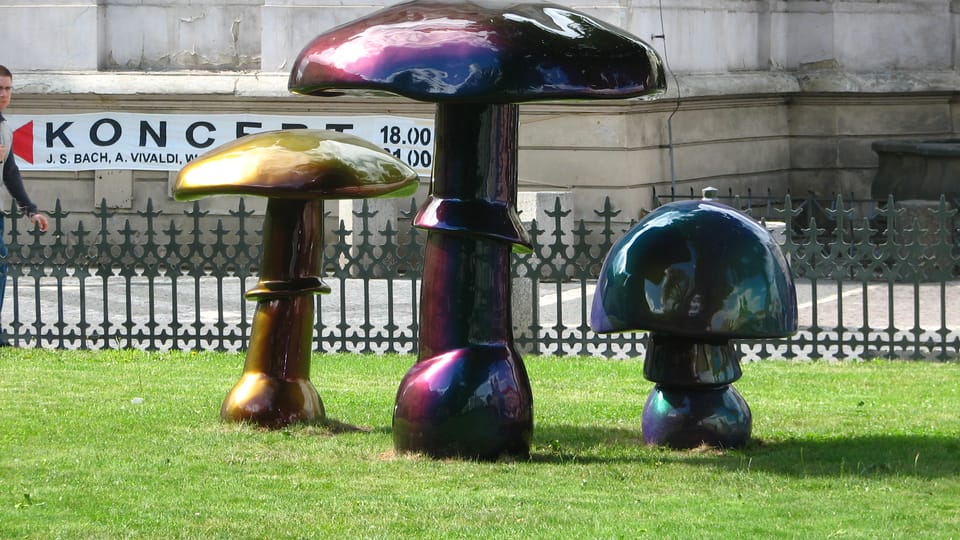