Why are Czech teenagers licking toads? What bugs Czechs most in the office? And, the doormat phantom of Liberec. Find out more in Magazine with Daniela Lazarova.

You know what they say about kissing a frog to get a prince? Well, it may not all be make-believe. Kissing frogs - or toads rather - is said to be the latest craze among teenagers in Ceske Budejovice and plenty of them are going back for more. Some are even keeping toads as pets in order to be able to kiss them as often as possible. The first thing you get is slimy lips but the prince is not far behind. In fact if you kiss the right toad you can marry your prince and walk off into the sunset with him. The secret is in the hallucinogenic substance that some toads produce and emit through their skins. Martin, a twenty-year-old student who is into this craze, says that toads are even better than hallucinogenic mushrooms, from which he and his friends used to make goulash. "Licking a toad gives you a whole different feeling - once I felt I was flying - really flying," he told the daily Mlada Fronta Dnes. Biologists confirm the fact that some toads - primarily the common toad, the European green toad and the Colorado toad - produce a slime with a strong hallucinogenic effect. The same is true of salamanders. However, licking this substance, especially if you are not sure what kind of toad you are dealing with, is considered to be a serious health hazard because the slime some produce can be highly toxic. The whole story may sound pretty far fetched but toads have been used as hallucinogens in the past - in the 1980s there were cases of people in the States smoking cigarettes which contained dried toad and salamander skin. Licking live toads is a new fashion - and teenagers who do it say that disgusting as it may seem after the first few licks you no longer notice - by then your toad has turned into a prince.

Žižkov TV tower
What's to see in Prague? Most people head for Prague Castle and other obvious tourist sites but Sarah Johnstone of Britiain's Guardian newspaper tells readers to look for hidden sculptures, kitsch museums and quirky carnivals - all sights that could easily pass you by on a package tour. So what are some of these exciting finds for tourists? David Cerny's outsize babies crawling all over the Zizkov TV tower and the equestrian statue of St. Wenceslas - but not the one at the top of Wenceslas Square - the one hidden in the nearby Lucerna arcade where the good king hangs from the ceiling astride the belly of an upside down dead steep with its tongue hanging out - likewise the work of David Cerny. Not to be missed - according to Mz. Johnstone's guide to Prague - is the world's only cubist lamppost, the Masopust Festival - five days of pre-Lent revelry - and funky designs such as Wellington-boot porcelain vases, thin-stemmed wine glasses modeled on disposable plastic cups and sperm-shaped tea-spoons. Never seen any? You can't have been to Prague. 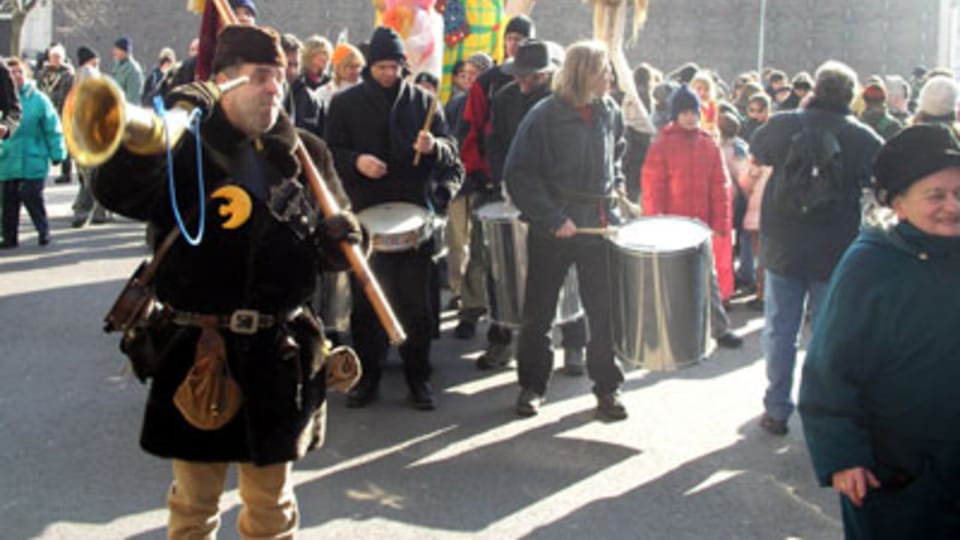 Many Czech towns are fighting a never-ending battle with graffiti artists - the town of Chomutov has put them on its pay list. In an effort to make the entry to the town more attractive it hired a number of graffiti artists to paint some of the city's attractions on grey concrete walls and bridges. Some of the spray paintings are so striking that the traffic police asked for the colours to be more muted for fear of a sudden increase in road accidents on the outskirts of town.

What bugs Czechs most in the office? If your first guess was the boss - then think again. According to a poll just released, it is room temperature and meaninglessly long meetings. The saying that you can't please everyone is only too true when it comes to room temperature. For some it is too hot, for others too cold and other yet don't like air-conditioning as such. You may be interested to hear that Radio Prague is no exception, although we do keep meetings as short as possible. Other office gripes - listed in the poll are finding someone else has taken your parking space and being driven mad by your colleague's mobile ring-tone. As for temperament - well, 85 percent of respondents said they'd seen a colleague of theirs go through the roof at one time or another. Of course, uncontrollable rages are not something we encourage at Radio Prague...

In Czech hops are often referred to as the country's green gold -but what might a necklace of green pearls be? Not a very lasting piece of jewelry. The town of Viskov made it out of 1,185 cabbage heads in order to set a new Czech record. The giant necklace measured over 230 meters and was pulled apart shortly after completion to serve a far more important purpose. The cabbage heads were pickled for the winter when they will serve as one of the main ingredients of the country's national dish - roast port, sauerkraut and dumplings.

The police in Liberec are investigating a bizarre case - the disappearance of hundreds of doormats from around town. Every night tens of metal doormats disappear without trace and some people have had theirs stolen several times over. The locals say they have a fair idea whose taking them - homeless people who are selling them at scrap metal yards and making an extra few hundred crowns. In fact those in the know say that five metal doormats will get you a bottle of rum. However the police have yet to catch anyone red-handed and until they do the doormat phantom - as the locals have named him - can continue to cash in on them. In the meantime people's patience is at an end and many have started buying plastic doormats which are worthless but also rather ugly. So if you happen to pay a visit to the town of Liberec these days and notice the strange new craze for plastic doormats - remember it is not bad taste that is to blame but the doormat phantom.

A web page announcing the opening of a Prague restaurant specializing in dog-meat which sparked outrage among the public was found to have been a hoax. The alleged restaurant called Dog Heaven publicized a menu including caramel chihuahua, greyhound ribs with apple sauce and basset roast with dumplings. People called up animal rights organizations non-stop to complain but before they had time to trace the author of the web page - the offensive article was replaced by an appeal to the public not to eat meat.

Dog owners in Prague breathed a sigh of relief and started letting their dogs off the leash again.