A priest tells his parishioners: sorry, I've fallen in love. Czechs are playing a crazy new sport -woodkopf. And, clearing the way for Santa: an owl drops down the chimney of a restaurant in Zatec. Find out more in Magazine with Daniela Lazarova.

Parishioners at a Roman Catholic church in Frystat, a small town in the eastern part of the Czech Republic, were in for a big surprise last Sunday when instead of launching into his sermon the priest told the congregation that he was leaving them because he had fallen in love and was planning to get married. The 39-year-old priest had been with them for four years and was extremely popular. He will now have to ask the Vatican to release him from his vows, which may take a couple of years, but is apparently not that unusual. Love must be in the air in that part of Moravia because over the past seven years five priests have left the Church in order to get married.

A former deputy for the Civic Democratic Party invited television crews into his garage this week to see a miracle - the image of the Virgin Mary on his garage wall. Jiri Bily said the image had appeared overnight - and when he'd seen it he suddenly realized that it was All Souls' Day. The image on the wall does create the impression of the Virgin Mary, or at the very least a nun and was created by a combination of dripping rainwater, wet plaster and mould. The Virgin Mary made the prime time news, but Mr. Bily's garage has not become a pilgrimage site. Reports of sacred images are rare in this part of the world - although lumberjacks in Slovakia reported having found the image of the Virgin Mary on a log of wood. The log now has pride of place in a local church.

Czech teenagers are playing a dangerous new game. Having tried riding on top of trains and hanging onto metro cars some of them are now sleighing on Czech roads towed by a vehicle going at sixty kilometers an hour or more. Sparks fly as the wooden sleigh whizzes over the road and at every turn the sleigh and rider swing into the path of oncoming vehicles before swinging back into their lane. "That moment of sheer danger is what makes it worthwhile," said a teenager who asked to remain in anonymity. The police have not caught anyone red-handed yet but a group of teenagers were only too willing to demonstrate this latest craze to reporters. It's a tragedy waiting to happen but, the kids doing it say, everything that's worthwhile in life involves a risk. 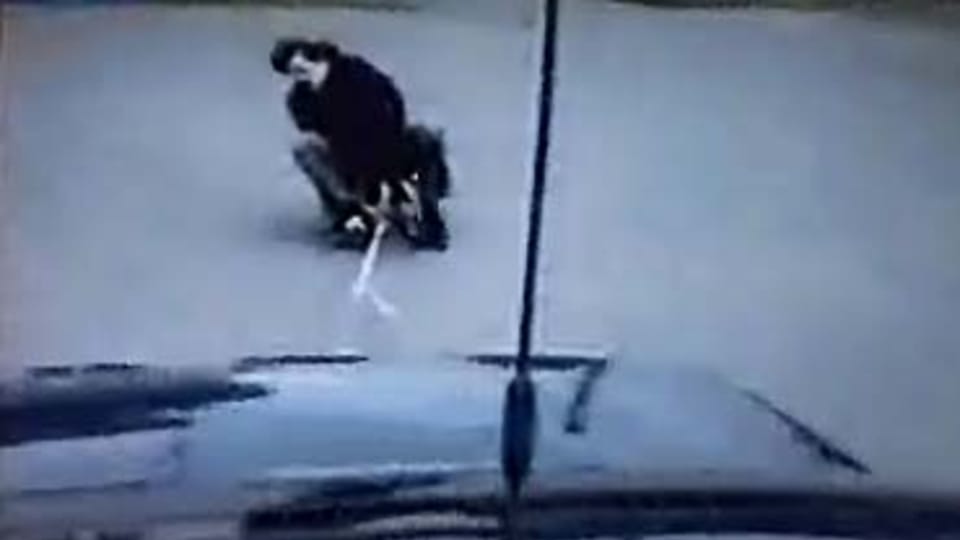 Louis XIII Black Pearl is a limited edition cognac produced by Remy Martin and packaged in exclusive Baccarat dark crystal carafes. Only the crème de la crème can afford it -and even fewer have actually tasted it, among them Queen Elizabeth, Winston Churchill and Prince Albert of Monaco. On November 14th a bottle of this "priceless" cognac is to go on action at the upmarket Hotel Mandarin Oriental in Prague. The Black Pearl was originally made to order for Louis XVIII in the 19th century and was dedicated to Louis XIII, thereby its name. Those rich enough to bid for this little luxury will have to offer a high price - a bottle of this rare cognac was recently auctioned off in Paris for twelve thousand euros and at an auction in Japan it went for 62 thousand euros.

Photo: CTK
You won't see it anywhere else in the world; it is a crazy Czech sport and it is called woodkopf. For some reason it has been given an international name: wood - as in "plank of wood" and kopf as "head" in German. Two protagonists circle each other balancing a plank of wood on their heads and the idea is to knock off the other guy's plank before he manages to do the same to you. The protagonists look like two birds performing some ritual dance. Brute force is not involved - merely a good sense of balance and agility. This bizarre sport was invented in 1992 and was thought to be a passing craze but people are still playing it and having fun, including singer Daniel Hulka and actor Michal Dlouhy. Last weekend a group of theatre actors organized a woodkopf tournament in the very centre of Prague, attracting many locals and tourists. Its proponents have a crazy dream - they would like to see woodkopf included in the Olympic Games if Prague is successful in its bid to host the event in 2016.

Social Democrat leader Jiri Paroubek and his wife are divorced but Mr. Paroubek is still helping his wife's charity fund. Last weekend a caricature of Jiri Paroubek sold for fifty thousand crowns. Its author - popular cartoonist Stepan Mares - said he would send the money to Mr. Paroubek's former wife Zuzana to be used for orphaned children. The auction took place at the launch of a book of caricatures by the same author - called Political Monsters. Contrary to what you might expect politicians vied for a place in the book. Clearly even a political monster is a better fate that failing to get noticed.

It is not just Santa Klaus who comes down the chimney - as the owners of a Mexican restaurant in Zatec could tell you. Last weekend they got an unexpected visitor who whizzed down the chimney and settled down on a wooden shelf above the startled guests. An owl looking for a bit of warmth in the first cold nights of the season must have lost its footing and tumbled down the chimney straight into the restaurant. It seemed happy enough to stay but was caught and shown out by members of the local fire brigade.

Emergency crews around the country have started using a cute toy - a cuddly yellow dragon wearing a red fire-helmet - as a means of winning children's trust more easily. The idea came from a child psychologist and firemen in Liberec who got a few dozen and were so pleased with the effect the little dragon had on terrified children that they ordered dozens more. Now they are being used by road emergency crews and firemen around the country. They all say that communicating with a child through the dragon - which is called Zachranacek, or Lifesaver - saves precious minutes - small children respond to directions more quickly and without panic. Firemen are called to emergencies involving children on average 2,000 times a year and in the past it was up to them to elicit a child's trust by speaking to them gently, promising a ride in a fire-engine or a red helmet. Now it's all up to the little dragon and he has become a fully fledged member of the team. No fire engine leaves the station without two or three of these toys in the cabin.

In the 1960s and 70s being left-handed was considered a handicap - something to be corrected as early as possible - and children who were inclined to use their left hand at school were told by the teacher to put it behind their back and practice with their right hand, because that was the "correct" hand to use. Today it makes no difference whether one is left or right-handed, but being left-handed can still make life a little difficult because there are very few shops specializing in things like can openers for left handed people. There is a single shop in Prague and the father of two little left-handed girls recently opened one in Brno in order to be able to provide for their needs. Both shops sell mainly German goods - can openers, a vegetable peeler, learning accessories and so on. Czech producers have not moved to fill this gap on the market yet - which is pretty amazing, because according to statistics more than a million Czechs are left-handed and now that there is no pressure on children to switch their number is expected to grow.
Author: Daniela Lazarová
tag:
run audio