Is that a fish bone or a car antenna? Christmas is not a good time for carp but some of them get their own back. And, over 100 Czechs head for the freezing cold Vltava River for their annual swim. That and other Christmas stories in Magazine with Daniela Lazarova.

A twenty-six year old Czech woman living in Munich gave birth to her first child all by herself on Christmas Day. The baby came three weeks early and the father was in the Czech Republic at the time. When the young woman felt the first pains she went to lie in the bathtub where she gave birth an hour later. She cut the umbilical cord, cleaned up the baby and only then did she call an ambulance. When the doctor arrived she opened the door with her baby in her arms. The doctors at the Munich hospital where she was taken said she’d given birth like a pro but had taken an incredible risk. Both mother and baby are said to be doing well. Meanwhile, the police are searching high and low for the homeless man who saved a baby from certain death in late December. The man was rummaging around in garbage cans for food when he saw the abandoned newborn amidst the rubbish. He tried to warm the child as best he could, putting it under his own jacket as he accosted various passers by asking them to please call an ambulance and the police. Shockingly, many turned away from him in disbelief and it took a while for him to get help. He stayed with the baby until the police and ambulance arrived and then said they could find him under a nearby bridge. The man has become something of a hero and the town hall authorities want to give him work and a place to live but he’s nowhere to be found. So for the time being the story has a happy ending only for the baby – but people are still looking for his savour.

Houses and gardens brightly decorated with Christmas lights was something that Czechs had long admired in American films. Under communism there were only two or three kinds of Christmas lights on the market and few people had anything original in this respect – although blown-glass and straw decorations abounded. Now that the market offers a wide variety of electric Christmas lights some people are going wild with them and turning their homes into a Christmas fairy-tale. Radka and Pavel from the town of Chotebore put so much effort into decorating their house and garden that they made the Christmas news-bulletin on several TV stations this year. Their house is ablaze with light – 200,000 little bulbs outline the house and garden and many people are drawn to it from afar – going out of their way to admire the sight. Radka and Pavel said they started work on the Christmas decorations in mid-October and their electricity bills are staggering but they claim its all worth it. “We never dreamed our home would one day look like this – and the way children’s eyes light up when they see it is worth all the work. Many of them think that this is where Santa lives,” Radka says.

Another fairy-tale sight is to be seen on a ring road near the south Bohemian town of Strakonice. Right in the middle of the ring you see a larger than life nativity scene – Josef, the Virgin Mary and baby Jesus outlined in white Christmas lights. It first appeared this Christmas and has proved extremely popular – drivers slow down to admire it and some make several circles in the ring-road before going on their way. 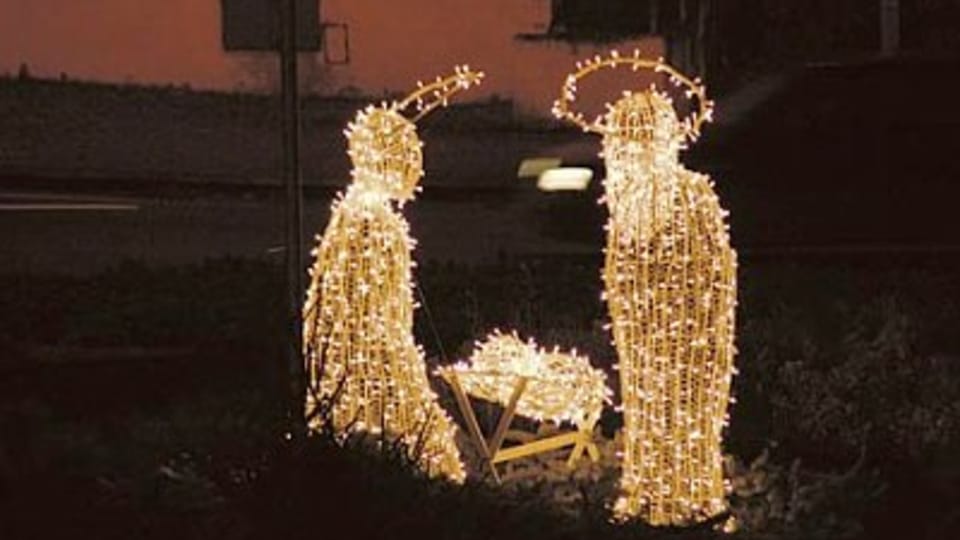 Doctors serving night shifts in emergency rooms on Christmas Eve know they are not likely to have a quiet night – lots of Czechs turn up every year due to the traditional Christmas dish of fried carp. Carp has lots of bones and inevitably some of them get stuck down people’s throats every year. Warning people to take care and watch out for carp bones has become part of the Christmas tradition but quite a few gluttons swallow the bones with the carp and have to be rushed to the doctor. This year was no exception – but among the fish bones – doctors reported one car antenna. A little boy who got a car for Christmas got so involved in the game with his siblings that he managed to pierce his throat with the antenna. Luckily there was no permanent damage and he was soon sent off home with a bandaged neck. The joys of Christmas…
Yvetta Hlavacova, photo: CTK
As every year the country’s “otuzilci” hardy men and women who like taking cold showers and a dip in the Vltava River at this time of year met on the embankment near Prague’s Legionaries’ bridge for their annual winter swim. TV crews and onlookers cheered them on as they waded in and struck out. The oldest was 94, the youngest a 13-year-old girl and they both swam 100 metres in the cold freezing cold water. Most of the others managed 300 meters including Yvetta Hlavacova, the lady with the longest legs in the world, who has swum across the channel La Manche three times. One hundred and fourteen people took a dip this year and some of them say they are the third generation of “otuzilci”. The tradition of swimming in the Vltava in winter goes back to 1920.

The end of the year inspires people to test their strength and make all kinds of New Year’s resolutions. Twenty-four-year-old Petr Benes from the town of Blatna is a whiz with a unicycle. Last week he “jumped” all the way up the Petrin lookout tower -299 steps - without a break, wowing visitors and setting a new Czech record. In training Petr has been covering some 500 steps a day and his goal is to perform a somersault with the unicycle – something that has reportedly never been done before in the world. I hope that your New Year’s resolution is somewhat less strenuous and that 2008 is a happy and prosperous year for you and your loved ones!