Boot camps have become increasingly popularity among Czech managers. What makes carnivorous plants so popular, and a scruffy devoted little dog whose master died five years ago shows up every day at Motol Hospital to wait for him. Find out more in Magazine with Daniela Lazarova.

The Five-Petal Rose Festival in Český Krumlov is an annual summer highlight transporting visitors back to the Renaissance era, to the time when the last of the Rožmberks were lords of the manor. Representatives from all the towns in South Bohemia whose coat of arms bear a five-petal rose are invited to take part in the Tournament of the Rose. The town is filled with knights in shining armour, musicians, conjurers, fencers, fire-eaters and dancers all performing for the crowd while craftsmen sell their wares at an open-air market. The historic city centre – a UNESCO-listed site since 1992 – provides a beautiful backdrop to this annual historical pageant and each year the festivities attract hundreds of visitors. 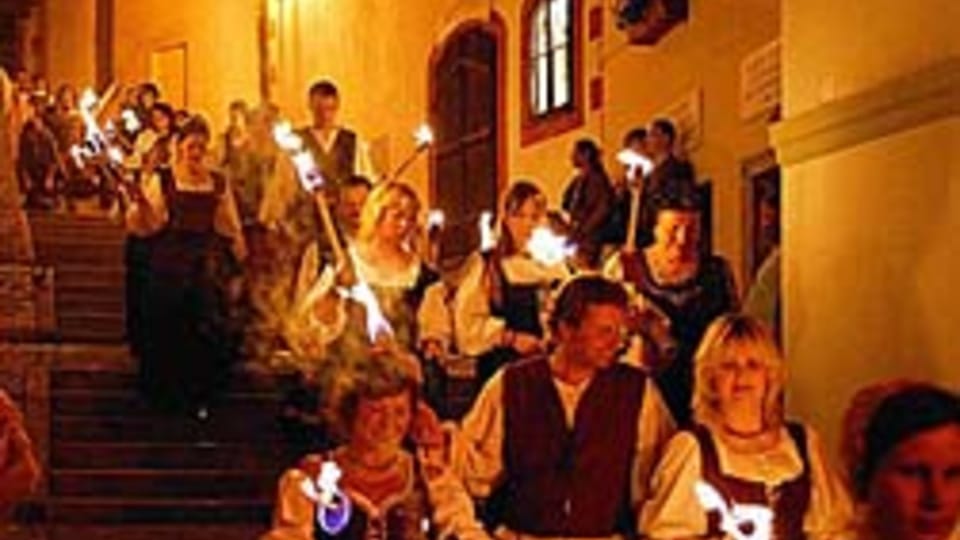 A Czech couple who have bred rabbits for years were astounded to find that one of the newcomers was completely hairless. That is to say, all rabbits are born hairless but this one remained so and has become a local attraction. He resembles nothing so much as a small kangaroo and has been named Karel or Kája – after the bald Czech singer Karel Hála. It is not clear whether Kája enjoys all the commotion that his unexpected appearance caused, but one thing is certain – it has saved him from becoming Sunday’s lunch. His owners say they want to offer him as a pet to a child who is allergic to animal hair and would not otherwise be allowed a rabbit.

There is a growing interest in carnivorous plants among Czechs. A wide variety of these plants is now available on the market and people are buying them for their homes, giving them names and treating them as pets. Apparently carnivorous plants such as Venus’ Flytrap need a minimum of care and give the kids a good show at feeding time. They are also guaranteed to keep the house free of flies and other insects. But the main reason behind the huge popularity of carnivorous plants is most likely a highly successful comedy about an eccentric professor and his carnivorous plant called Adéla. The film, called “Adéla has not had supper yet” was a bright spot in the communist-censured cinematography of the 1970s. Today many Czech families are giving their carnivorous pets precisely that name – Adéla .

The Motol hospital has a sad little mascot. A scruffy, devoted little dog whose master – a maintenance man at the hospital - died five years ago turns up every day in the hope of finding his master there. According to the nurses he is there every day without fail –rain or shine - and waits for an hour or so before crossing the meadow and disappearing into a nearby forest. He sits there in the snow in minus twenty degree temperatures and in the heat of summer. Attempts to catch him and find him a new master have repeatedly failed. The nurses leave some hospital food out for him every day and have given him a name but the dog won’t let anyone approach him. Many patients have been so touched by his devotion they have asked to take him home – but the little dog is clearly not willing to give up just yet.

Meanwhile, a collie named Harry has a far happier life. After working as a railway employee at his master’s side he recently embarked on a political career. Harry is now a fully fledged member of the Social Democratic Party in the town of Chomutov and has a membership card to prove it. The dog attends all local party meetings and has even learnt to vote with his right paw. Unlike some, he always pays his membership fees on time and never complains that the meetings are too long. Harry is the local mascot and the Social Democrats hope that he will help them win the next elections. He may even run for one of the top party posts. Unlike other politicians he is immune to corruption, doesn’t drink-and-drive and is unlikely to put his foot in it.

Czech managers are looking for ways to de-stress and off-set the effects of long business lunches, a lack of physical activity and no sleep. And many say they have found the answer at their local boot camp. Group exercise based on the principles of US marine training is gaining considerable popularity among the country’s top managers. When a boot camp session was launched in Ladronka Park a year ago only twenty people turned up. Today grueling exercises take place in a number of Prague locations several times a day and are attended by hundreds of people. Some come to clear their head before important business talks, others come to loose weight and some people say it helps them stay in shape without hours spent on the treadmill. Managers say that they like the intensity of the exercise and the fact that it is done in a team motivates them to drive themselves harder and longer than they would exercising on their own. And – although many would naturally socialize - the pace is much too fast and too hard to allow them to talk about work.

Sodzi Joshikawa is working at the Pilsner Urquell Brewery, photo: CTK
On the other hand, a manager from Japan has found an altogether different way of de-stressing. Thirty-nine-year old Sodzi Joshikawa left his job in Kyoto and traveled around Europe to find that the best beer he’d ever tasted was made in the Czech Republic. So he asked for an apprenticeship and is now working at the Pilsner Urquell Brewery. When he has learnt the trade he plans to return to Kyoto and establish a brewery of his own.
Author: Daniela Lazarová
tag:
run audio