Czech Radio draws blood - a unique tradition for recruiting blood and bone marrow donors. Prague and Vienna remember the good old days. And, why would anyone want to piece their back with skewers? Another Czech makes the Guinness Book of Records! Find out more in Magazine with Daniela Lazarova.

Magazine
David Copperfield, photo: CTK
Ever since illusionist David Copperfield's first visit to Prague in the 90s many Czechs have been looking forward to seeing him in action again. Well, he's due to perform in Prague once again this November -November 29th to be precise -and there is already speculation as to whether or not he'll make Prague Castle disappear. The illusionist himself is not giving anything away - but it is rumoured that he'll teach people how to win in the lottery - and that alone is enough to draw a crowd. A ticket to the show will cost you between one thousand and three thousand crowns.
Emperor Ferdinand I
Prague and Vienna are presenting their common history to the public. An exhibition called "Prague and Vienna in the course of the centuries" attracted thousands of visitors in Vienna last summer and is due to open in Prague in less than a month's time. It will show more than three thousand unique artefacts, there will be lectures and competitions. In Vienna, the exhibition was opened to coincide with the 500th anniversary of the birth of Emperor Ferdinand I - the Hapsburg ruler who ascended the Czech throne and closely linked the fate of Prague and Vienna for a period of 400 years.

The exhibition's organizers say that one of the reasons why the exhibition was planned was an attempt to diffuse tension in Czech-Austrian relations over the Temelin nuclear power plant. We wanted to remind the two countries how much they have in common - the organizers said - but then anyone who has visited Prague and Vienna can tell that at first glance.

Lada Hanzel, photo: CTK
Lada Hanzel from the town of Prerov made the Guinness Book of Records last Saturday when he dragged an 87 ton locomotive attached to 14 skewers piercing the skin on his back. Down on all fours, he dragged the locomotive a full four and a half metres in 26 seconds, setting a new world record in this bizarre discipline. He had attempted to set this painful record on two previous occasions without success. Hanzel has several other records to his name - without skewers piercing his skin, he can drag a locomotive and five carriages weighing 528 tons. In what way exactly he employs this particular talent in normal life is not quite clear.

Close to 800 people attended this year's Veteran Car Parade in the town of Mlada Boleslav. The event was organized by the town hall and first took place last year when the town hall decided it wanted to launch a tradition that would highlight the town as a leading car-maker -home to the well known Skoda car. Over 80 veterans took part in the veterans ride through the town including a Bugatti, Mercedes, Triumph, Jaguar, Citroen, Fiat and Alfa Romeo.

For years now Czech Radio has been engaged in helping to recruit blood and bone marrow donors. Every two months or so the radio calls on its listeners to come and donate blood in the radio building itself. Hundreds of regular listeners and fans respond to the appeal and on the given day the main entrance hall turns into a medical ward - with needles, nurses and mobile beds very much in evidence. For some reason Czech Radio listeners like the idea of donating blood at Czech Radio - rather than a medical centre or hospital - and they don't seem to mind queuing up for hours, making new friends and chatting about radio programmes in the process ,while they watch their favourite radio personalities come and go. Having donated blood they are rewarded with a hot dog or some other quick snack and a drink to regain their strength and part happily promising to turn up again the next time Czech Radio wants to draw blood. I must say that when I first started work here I was amazed to see this sight - and the name of the event "Giving Blood at Czech Radio" did sound very unnerving. 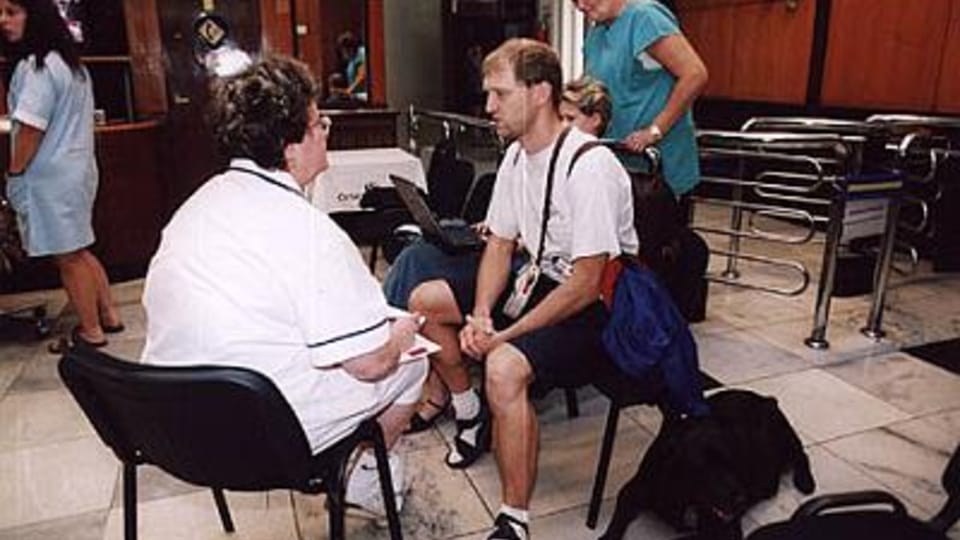 Czechs may soon be able to watch a very different kind of television -as of this week political parties have been given the green light to run their own radio and TV stations. The newly approved law created plenty of controversy in the upper house of Parliament - with some senators strongly opposed to the idea. Some of them warned that Czech democracy was still too fragile to allow for political propaganda of this kind and that the law would open a veritable Pandora's box. "Imagine communist broadcasting" one of them said "Czechs are not ready for that yet". Ready or not, the Lower House of Parliament promptly overruled the Senate's opposition, giving political parties the green light to broadcast their own brand of propaganda. With digital broadcasting in sight that's a real possibility -especially with radio stations, which would not be more expensive to finance than billboard campaigns. It remains to be seen who will be the first to make use of the opportunity - and whether anyone out there will be willing to listen. Czech police recently arrested a gang of supermarket thieves - nothing unusual about that except that the ringleaders were members of a security service employed to prevent theft at the dozen or so supermarkets in question. When their owners reported frequent thefts the police sent their own men to get to the bottom of the problem. What they found was that the security men employed to guard the supermarkets in question were helping thieves to fill their backpacks out of the range of security cameras. The security men - who wore plain clothes in order to move around the supermarket unnoticed - covered for the thieves -who were mostly security men from other supermarkets. When they came off duty they would in turn go and steal at their colleagues' workplace. Occasionally - in order to avert suspicion they would organize "a chase" in which the thieves would get away but the stolen items would be "saved". As a reward for getting them back the security men in question would get a fat commission of several thousand crowns. All of them are now awaiting trial.

Meanwhile the supermarkets in question are left with a big headache - finding security men they can trust.