Forget about mud slinging, girls in the Czech Republic prefer cream cake fights. Why has the town of Usti nad Labem put a three metre dwarf on its main square? And, the man who buried himself underground for ten days to set a world record. Find out more in Magazine with Daniela Lazarova.

Magazine
The Euro 2004 is making a lot of salesmen very happy - the sale of upmarket television sets rose significantly before the start of the championship and the consumption of beer has followed an even steeper incline. Families who were not astute enough to predict domestic fights over what programme to watch are in big trouble. One such couple ended up at the police station after they tried to kill each other over the choice of programme for the evening. The man wanted to watch a football match, the woman -the Czech Pop Idol contest. He tried to strangle her, while she grabbed a kitchen knife and tried to stab him. The police filed charges against both and advised them to invest in a new TV set.
The giant dwarf, photo: CTK
The town of Usti nad Labem has a new attraction: a three metre dwarf spread out nicely in the middle of the town square. If you are wondering why anyone would want to make a dwarf three metres tall - then it is an attempt to reinstate dwarfs in the eyes of the public. "Dwarfs are not kitschy" says the chairman of the local society for dwarfs. Plaster dwarfs were to be seen in many a garden in the past -but are now generally considered a sign of poor taste and have been banned to sheds or simply put on the junk heap. The unveiling of this huge dwarf caused some controversy on the square between two rival factions of local inhabitants - the anti-dwarf and pro-dwarf activists. The town's mayor, who unveiled the little giant last week, expressed the hope that the newcomer would attract more tourists to Usti.
Fakir Ben Ghan after ten days of burial, photo: CTK
Why would anyone want to bury themselves two metres underground for ten days? A fifty year old Czech man has done just that. Zdenek Zahradka - or fakir Ben Ghan as he is known professionally- has just set a new world record in time spent buried underground without food or water. The old record was held by Jim Carter from Ohio who spent six days in such conditions. Ben Ghan is the Czech Republic's leading fakir and he holds a number of bizarre records - including that of swallowing a 55 cm dagger. He spent 24 hours on a bed of 220 nails, which is considered quite an achievement because the less nails you have the more it hurts. The fakir spent 10 days in a state of semi-consciousness induced by meditation, A huge crowd turned up on Thursday to see him return to the world of the living. People watched with bated breath as two men started shovelling earth to get to the coffin. It was pulled up and -as the lid came off- the first glimpse of Ben Ghan were who hands raised in the sign of victory. Then the man himself emerged -more or less unharmed by the experience. He had to be helped out and appeared slightly disoriented but he was smiling and ready to face TV cameras and newsmen right away. Eight and a half kilos lighter, he said he had not suffered greatly during the first 9 days but that the tenth day had proved to be a major challenge. Just one more day would have been too much -he admitted. And, exactly as he had planned, the fakir concluded this unbelievable feat by opening an international Festival of Magic in his home town Jaromer.

Now I'd say that in the town of Letovice they have a better idea of how to have fun. Last weekend the town organized a girls' cake fight - inviting girls and young women from around the country to come and join in the fun. Some twenty girls responded to the challenge, changed into bikinis and set about winning the Cake girl title. A few of the guys watching couldn't resist joining in and it soon turned into a very messy free for all. The winner was Marika Shonova from Brno. Her reward was 5,000 crowns and a huge cake! As far as sports goes this is definitely worth trying! 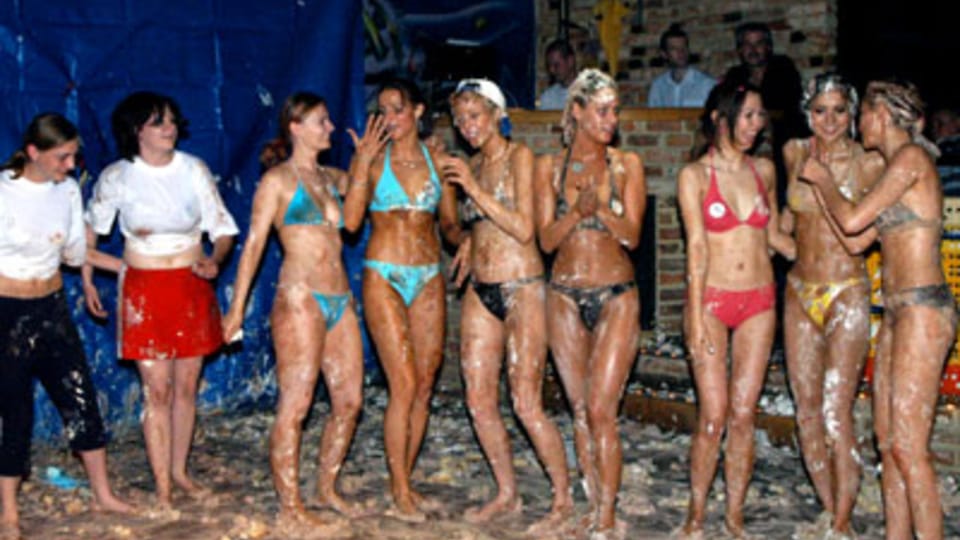 Are you a Ferrari fan and can't afford to indulge in such a luxury? Then you are certain to enjoy the Ferrari car parade organized by German Ferrari Club Deutschland in Cesky Krumlov this weekend. From Thursday through Sunday over 50 proud Ferrari owners are flaunting their darlings in and around Cesky Krumlov -viewing the sites and giving Czechs an eyeful. Jitka Zikmundova explains what the four day event entails:

"They have a programme in Cesky Krumlov and the surrounding area. They will explore the town, they will visit the castle and they'll also be driving through Bohemia forestland."

Will visitors be able to take a closer look at the Ferrari cars - or even get a peek inside?

"Well, I'm not sure if they will get a peek inside but they will be able to see and admire the 50 Ferraris parked on the main square of Cesky Krumlov ."

Will there be some veterans?

"I don't think so. I believe they are all new cars, new models. There will be plenty to do for people who turn up -a Beatles revival band and competitions for children and of course people can admire the Ferraris."

We said this was organized by the German Ferrari club - are there any Czech owners of Ferraris do you know?

Viper, photo: Zdeněk Fric, CC BY 3.0 Unported
If you suffer from snake-phobia the last place you want to be is in the town of Hlinsko. This year Hlinsko is reported to be infested with snakes -some of them poisonous - and the locals are increasingly nervous about wondering off the main paths or working in their gardens on a sunny day. "I really look where I tread now, and I don't dare let the children out of my sight," a local woman says. The mayor has had to call in a "pest control" team to capture the offending reptiles and transport them to a more suitable location. The town has never had this problem in the past and experts believe it is most likely last summer's tropical weather that made snakes in the region over-breed. It was dry and there were plenty of rodents to feed off. Well, lucky for the town this summer is predicted to be moderate with plenty of rain.
Author: Daniela Lazarová
run audio