Hockey fans at the opera? Believe it or not Czechs are producing an opera about their 1998 hockey victory at the winter Olympics in Nagano. Democratic presidential frontrunner John Kerry and his distant relations in Europe: the American who is so popular three European states are laying claim to his ancestors. Czech chefs give the public a taste of the best -and demand recognition! And, the price of a condom rocks Parliament. Find out more in Magazine with Daniela Lazarova. 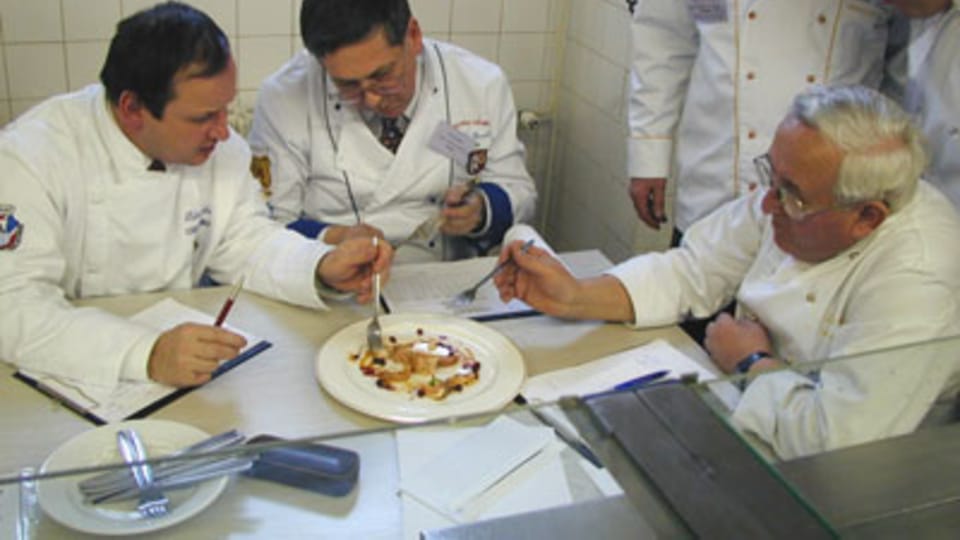 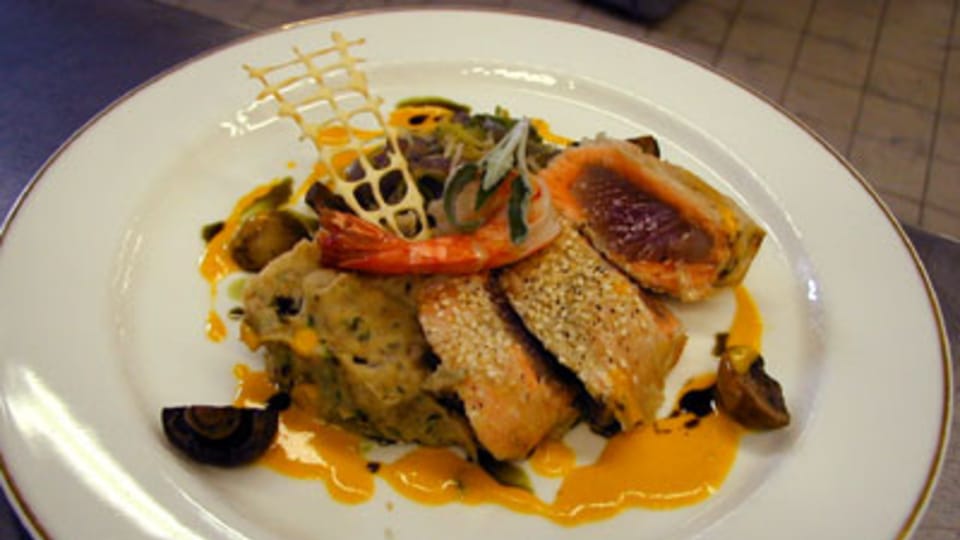 Everything on the menu was original -specially created for the contest. In a different hall the public was invited to sample delicious looking dishes from around the world while people from the profession attended lectures and debates on gastronomy. Outside barmen served drinks, and waiters offered visitors hot tea or some goulash out of a gigantic kettle and pot. 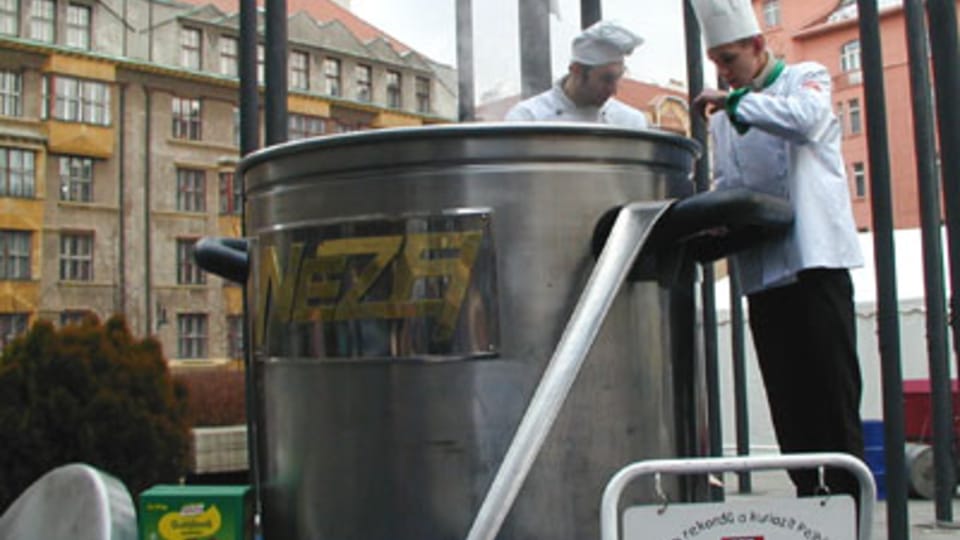 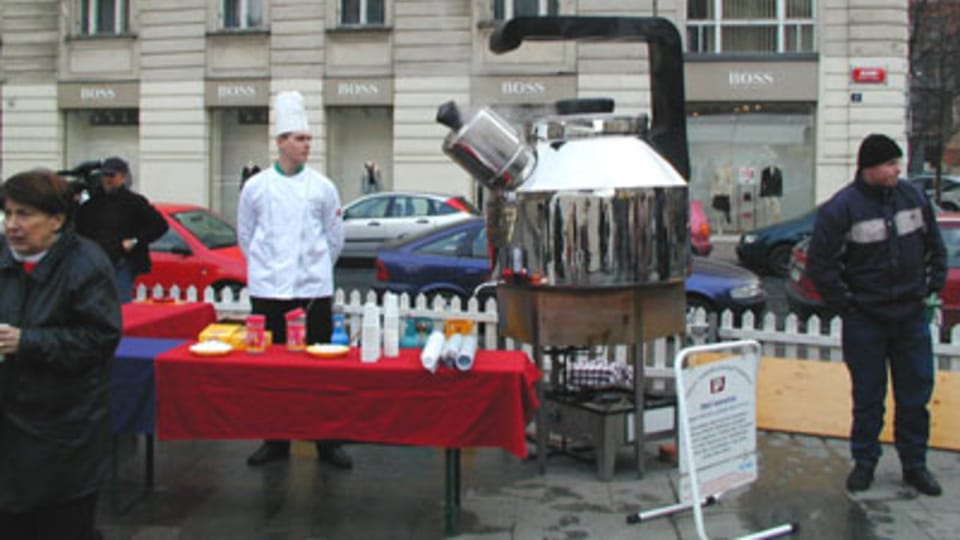 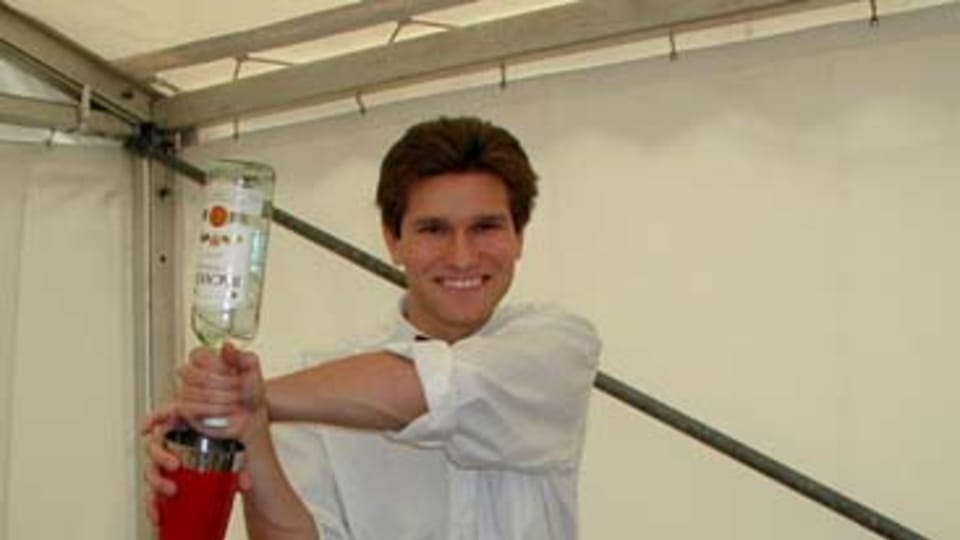 This was merely to lure more people to where the real food festival was taking place. "We would like to educate Czechs about the art of gastronomy," said the head of the jury Jiri Kral. "The profession still does not get the recognition it deserves in this country. In France everyone can name the country's top chefs. Here people only read cook books written by celebrities," Kral says.

Josef Richter is a member of the junior team and he too feels that Czechs need to stimulate their taste buds a lot more than they are doing.

"We've just finished cooking -in the juniors category. We had four hours in which to do it and as you can hear from my voice I'm knackered. I made milk veal with sweet bread, lightly sautéed vegetables, veal demi-glace and for dessert -gingerbread parfait with fresh cranberries in San Remo sauce. I work in a French restaurant and I've learnt three key words as far as food goes: simplicity, beauty, and taste. Unfortunately 80% of Czechs still like to see dumplings, meat and a rich sauce on their plates -but there is so much more out there. A world of fish and vegetables that Czechs almost ignore. But we're confident that this will change. Already there are restaurants which offer the kind of menu you'd find in London or Paris and there are now people who select their food carefully not just after giving the menu a cursory glance." 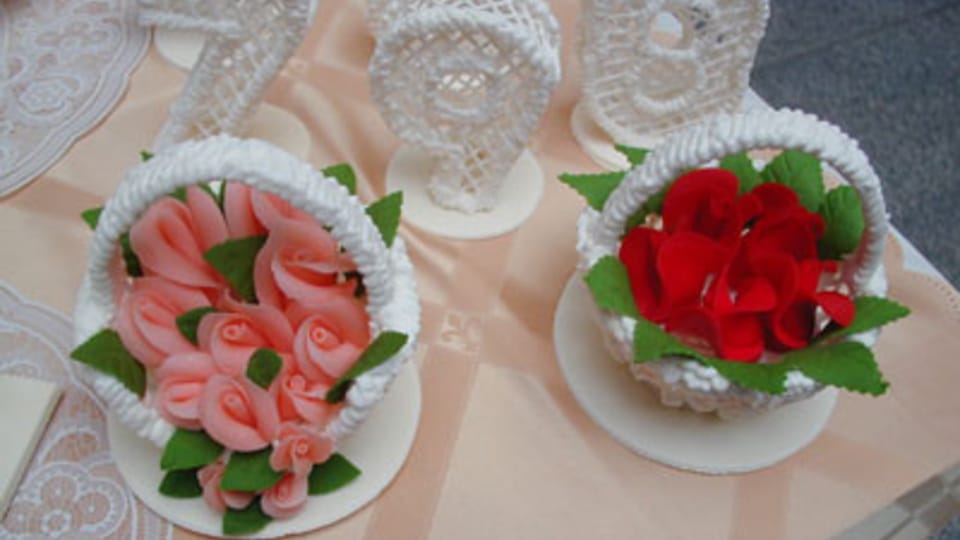 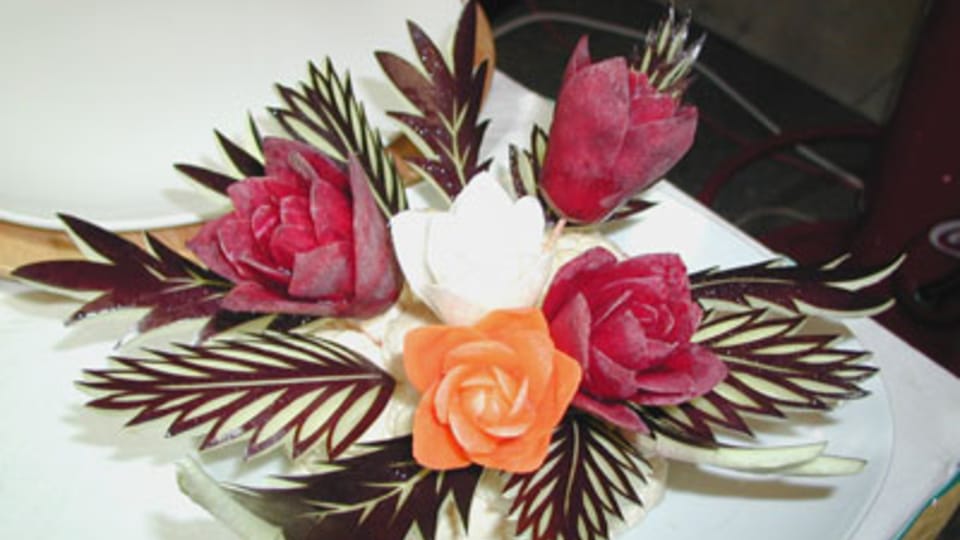 Outside Milan Sahanek, one of the senior chefs, was carving dolphins out of ice. Ice carving as a form of table decoration is a fairly new discipline in the Czech Republic but some clever cooks are already collecting prizes.

"In Germany I won the gold medal in ice-carving -and from time to time I carve."

What shapes can you do?

"Music instruments and animals, predominantly. They are very successful. For example now I'm carving an eagle."

You've barely touched this block of ice -how long will it take you to carve an eagle from it?

"One statue of this size takes me three to four hours. /3 metre high block of ice/ But in competitions we have just one hour in which to do it."

How did you start doing this?

"I have a few very good friends in Europe who are ice-carvers. My mother is a painter so...."

So you are an artist basically.....When you carve this magnificent statue how long does it last?

"At room temperature -five, six, seven hours at the most." 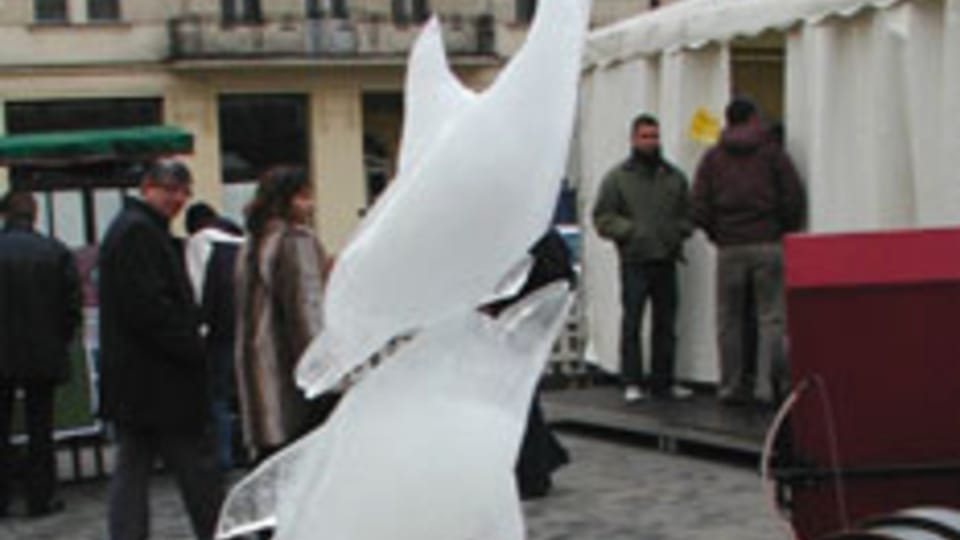 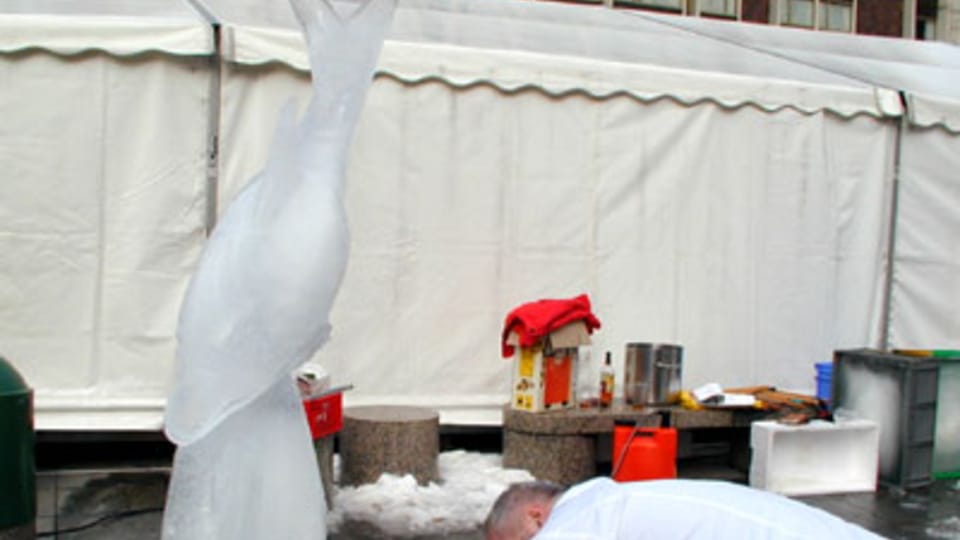 And the winner of the 2004 Chef of the Year Contest was Jan Pipal -from Hotel Intercontinental - which, incidentally, hosted the show. So now you know where to go for the best meal in Prague ...

America's Democratic Presidential frontrunner John Kerry -has certainly generated interest on the European Continent. In fact he is so popular that three European states are laying claim to his ancestors. The north Moravian town of Horni Benesov has been in a fever of excitement ever since it came to light that John Kerry's Jewish grandfather Fritz Kohn was one of the town's former inhabitants. According to a study carried out by the Boston Globe Fritz Kohn lived and worked in Horni Benesov as a brewer before emigrating to America, converting to Catholicism and changing his name sometime at the beginning of the last century. John Kerry is our man - say kids from the local school. Never has the town watched presidential elections in the United States with so much interest. The town has even sent John Kerry an E-mail to cement the relationship, promising that if he wins the election Horni Benesov would make him an honorary citizen. Senator Kerry sent back a greeting via Czech television saying he hoped to pay the town a visit as the next US President. It is not clear who's keeping their fingers crossed for him in Budapest, Hungary, where one of his grandmothers was allegedly born, but we do know that Mr. Kerry has some strong supporters in Vienna, where the mayor of Vienna's eighth district Josefstadt, is allegedly a distant relative. One way or another, it seems John Kerry will always find a warm welcome on the Old Continent.

It is not often that the unity of the governing coalition is undermined by something as unlikely as condoms. It was actually the price of condoms that put the governing coalition at loggerheads during a recent vote on an amendment to the law on value added tax. At the very last minute a deputy of the Freedom Union, one of the smaller parties in government, took the stand to propose that condoms should remain in the 5% VAT rate rather than the 19 % VAT rate as proposed by the governing coalition. The call was immediately taken up by other Freedom Union Deputies as well as the opposition Civic Democrats and the Communists. "Keep condoms cheap" they clamoured. The ruling Social Democrats ground their teeth and demanded a twenty minute break during which the Freedom Union was brought to order and reminded of its responsibilities to the governing coalition. Twenty minutes later the Freedom Union deputies walked back into the assembly hall contrite and ready to vote for more expensive condoms. The opposition Civic Democrats jeered openly. Condoms nearly brought down the government, they told reporters. Fighting to save face the Social Democrats countered that it wasn't a question of condoms - it was a matter of principle!
Sale of the fifth volume of Harry Potter, photo: CTK
You'd think that after 40 years of queuing up Czechs would have had enough. But some things are just worth standing in line for and Harry Potter appears to be one of them. Last Saturday at midnight was the magic hour when bookstores across the country opened with just one book on their shelves and thousands of kids jostled to get their hands on the Czech translation of Harry Potter and the Order of the Phoenix. Wenceslas Square in the centre of Prague presented an incredible sight - kids in Harry Potter costumes were everywhere - having got there at 8 in the evening to make sure they got a copy. Some 15 thousand copies were allegedly sold before dawn.

The Czech Republic's hockey victory at the winter Olympic Games in Nagano in 1998 is something that Czech hockey fans will forever remember. Many own video and DVD recordings of the event or the book which came out shortly after -in order to relive the moment of triumph over and over again. Now they can look forward to the premiere of Nagano at the Estates Theatre in Prague. It is indeed an opera about hockey - the country's hockey victory in Nagano with some romance thrown in for good measure. Young opera singers have taken on the role of the country's national team players and their coach -Dominik Hasek, Jaromir Jagr and Milan Hnilicka on stage singing their way to victory! Will there be a puck - is the question that many people ask first. There will, indeed -and it will be symbolically represented by a woman - a beautiful soprano. A glimpse of rehearsals suggests this will be one of the most avant-garde performances Czech opera audiences have ever seen. But hockey fans are ready to savour the Nagano victory yet again - in a fresh light. The premiere is on April 8th.