Six years ago Czech film director David Ondricek scored a huge hit in the Czech Republic with the film "Samotari" - or "Loners" - a hip and funny comedy depicting the quirky and wayward lives of twentysomethings in the Czech capital. Ever since, audiences have come to expect a lot from the director -more so following the disappointment that was his third film "One Hand Can't Clap". Now, the director is back with "Grand Hotel" (Grandhotel in Czech) - just released in the cinemas. What's the film about? In today's Arts you'll find out.

Jested
The first thing one can say about "Grand Hotel" is that it is beautifully filmed, set in an unusual location not often explored on Czech screens: the town of Liberec and its surroundings in northern Bohemia. In this film especially, location is everything: the camera often dwells on images of the far-off mountains and the ever-changing weather, that are the perfect setting for the film's main protagonist Fleischman. Why? Scriptwriter Jaroslav Rudis explains:
Fleischman (Marek Taclik)
"I was thinking about Liberec because that is, in my point of view, one of the most interesting cities in the Czech Republic. It's a bit lost, I the north, surrounded by mountains, and it is raining there all the time and it has a very special atmosphere, also because of its history. I had a story in my head about a thirty-year-old guy who is not able to move from this town. He is full of anxiety, he has never had a girl, and is living in an old hotel, and the only thing he is interested in, is the weather. Everyday he checks the temperature, the pressure, and he knows everything about clouds."

It turns out Fleischman, an eccentric but ultimately friendly spirit, works in one of the Czech Republic's most instantly recognisable hotels: a 1960s architectural jewel, the rounded metallic spire known as Jested that sits atop the Czech Republic's Jested Mountain. Setting the film there, says Rudis, wasn't a difficult decision:

Grandhotel - Jaroslav Rudis in a cameo (centre-left)
"It was the end of May and it started to snow. The sun was shining and within a minute there was a storm with snow. And we said 'Yeah! Fleishman is observing the weather: that's the right place for him'. That's it!"

In effect, for better or for worse, Fleischman is "lost in Bohemia", unable to escape the area of his birth. He'd like to, but he simply can't, deeply affected by his parents abandoning him at an early age. Whenever he tries to leave he suffers anxiety attacks of such severity he is always forced to turn back - a source of some of the films dark but comic scenes.

Klara Issova and Marek Taclik
If there is an "escape" of sorts, it is in the clouds. Fleischman watches them day by day, even as ordinary life seeps in around him. There are arguments with his boss, there is something of a friendship with the wonderfully sleazy local waiter Patka, and of course there is the love interest, played by the petite and wide-eyed Klara Issova, all employed at the hotel. Did I say love interest? Fleischman, in all his geekiness - is of course the last to see it, though Issova's character grows closer to him as the story progresses.
Observing the ever-changing clouds
Who is Fleischman? In a sense, a character following in a long line of naïve little guys in Czech cinema, outcasts, or even idiot savants in everything from "Closely Watched Trains" to "Return of the Idiot" to "The Buttoners". He - and all of the other characters in the film are effectively trapped "in" the Grand Hotel, their lives not going anywhere, turning in circles. Fleischman, meanwhile, is excellently played by actor Marek Taclik, whose face, depth, and expressiveness are still largely undiscovered country, and he is fascinating to watch. Taclik nails the character making him convincing in all but a very few of the film's scenes. Screenplay author Jaroslav Rudis again:

"I saw only a few screen-tests that David did with him and for me it was from the first moment sure that he is the right Fleischman, that he was maybe 'born' for this character. I know him just a bit as a person and I know he also came from the 'North' form Usti nad Labem and I can imagine that he was really able to relate to Fleischman and I really appreciate it. He's great."

Jaroslav Plesl as Patka
At the core is Fleischman at thirty, and the question is "will he - and the others - break the spell and find happiness and freedom? Slowly, Fleischman finds his way, planning on escaping Liberec in, of all things, a hot air balloon. As Klara Issova's character grows closer to Fleischman as well, the question becomes, will she accompany him? Things slowly reach a head: a fight ensues between Issova's character and sleazy boyfriend Patka (Jaroslav Plesl) in one of the film's best scenes in the hotel kitchen. Realising she means to leave him he displays an unforgettable fireworks of ineffectual jealousy, insecurity, and rage. Many utensils are scattered and eggs destroyed. Director David Ondricek:
Director David Ondricek
"I very much like all the scenes in this film but the one I like the most and that I liked the most on the set, was the fight in the kitchen, two-and-a-half minutes all done in one shot. To be honest I was very moved after this shot on the set and I like this scene very much."

Looking into the microcosm of life in the hotel, one has to wonder why characters like Fleischman and the others trapped there - especially the beautiful Klara Issova - don't just pack up and leave earlier? A lot has to do with the region itself: even if it's a backwater it's a gorgeous and magical one. And, Jested, even more than Fleischman, is perhaps the film's most important character. Director David Ondricek again:

The lovely Klara Issova
"One of the most important things in this film is the setting and location. The location is a very magical place and we stayed there for three months, at that hotel on the top of the hill. For us - the crew and the actors - it was a kind of psychotherapy! One thousand metres above sea level. After the film, I say we are different than before!

Marek Taclik and Klara Issova
There's no question that patience paid off: many of the shots are stunning and we see the surrounding hills at all times of day and night, in all kinds of conditions: early morning mist or summer afternoon. By the end, the audience too will feel at home. Different than before, says director David Ondricek? Yes, why not. "Grand Hotel" is different in the sense that it is unafraid to explore fully the genius loci of an area and to incorporate it intrinsically into the story, far more than any backdrop. And, while the story of the late bloomer Fleischman may not appeal to everyone - some will find it too lyrical or not take to its quirky humour - at least he is a character most of us can understand. When at last he overcomes his irrational need to leave, we know why: Jested is a beautiful place. One that he and his new girlfriend love. 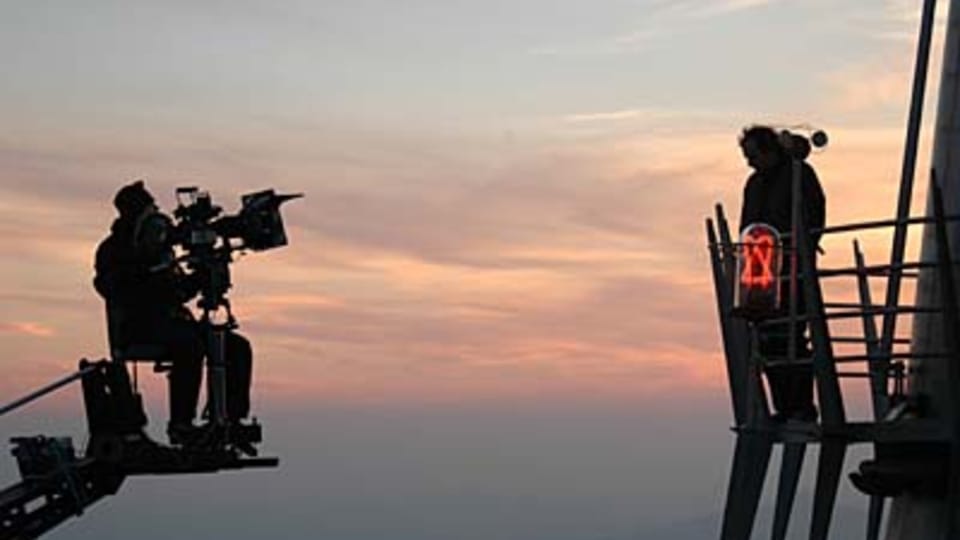 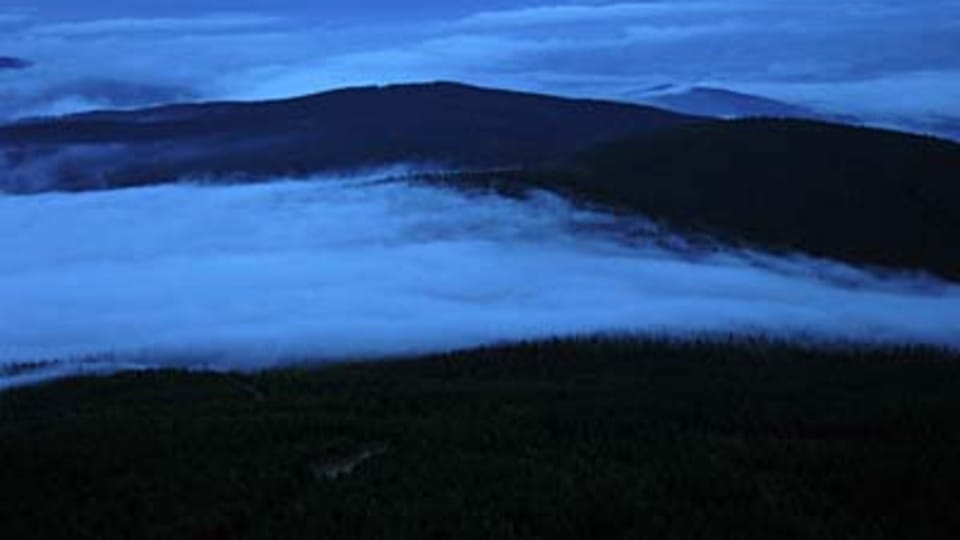 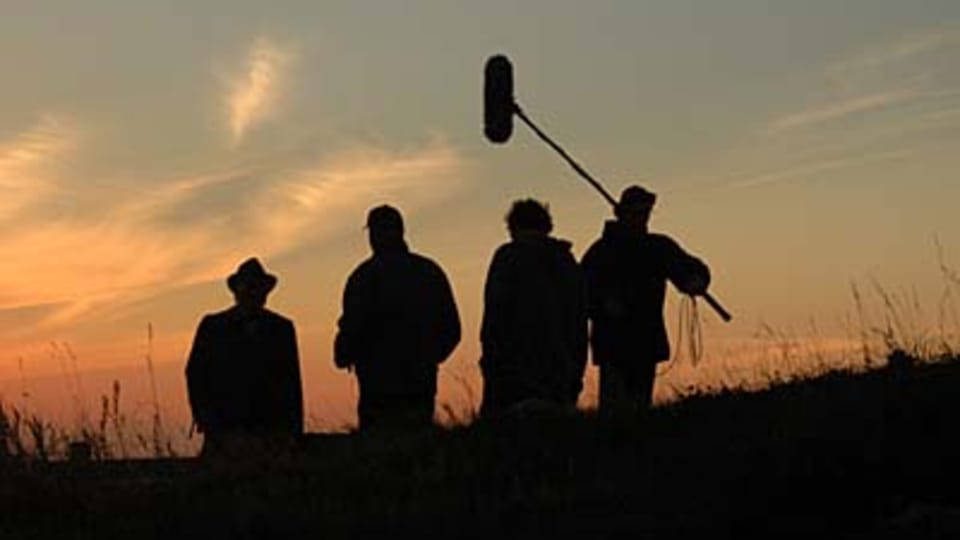