Kokořínsko is a unique protected landscape area (or CHKO in Czech) just north of Prague. The area feels like it has battled with its surroundings to fly the flag for natural beauty – to the south are the looming chimneys of the giant coal-powered Mělník power station. To the east the factories of Mladá Boleslav. And to the south-west, the vast agricultural plains that stretch all the way down to Prague. But once inside, it’s remarkably easy to leave all that behind.

Máchovo jezero, photo: Miloš Turek
There’s a distinct atmosphere in this northern part of Bohemia, which differs from other parts of the country – for this is very much Prague’s rural and largely unspoiled northern backyard. Log houses – roubené in Czech – are very common here, featuring a characteristic zebra-like design of dark horizontal beams sandwiched between white mortar, traditionally made of lime covered mud. Such homes offer the prospect of a rustic holiday home for many Czechs – but there are downsides too, as they are high maintenance and require considerable investment to restore and insulate them according to modern standards.

You can actually get a very good sense of the area just by taking a regular bus from Prague's Nádraží Holešovice station to Česká Lípa. The route winds its way along a B-road that goes through the heart of Kokořínsko, passing small towns and villages such as Medonosy, Dubá and Chlum. Or there’s another bus route, which involves changing at Mělník and heading towards the charming town of Mšeno. In both cases, the bus trip is basically a sightseeing tour, passing rolling countryside evocative of English fields. All along the way you’ll also pass numerous log cabins tucked away within the forest – these have in many cases become exclusive holiday homes for the wealthy. 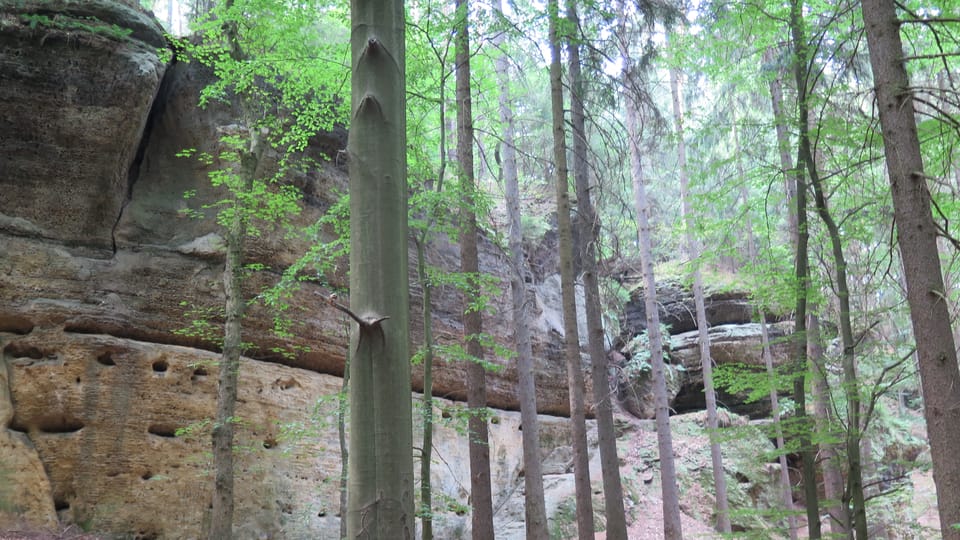 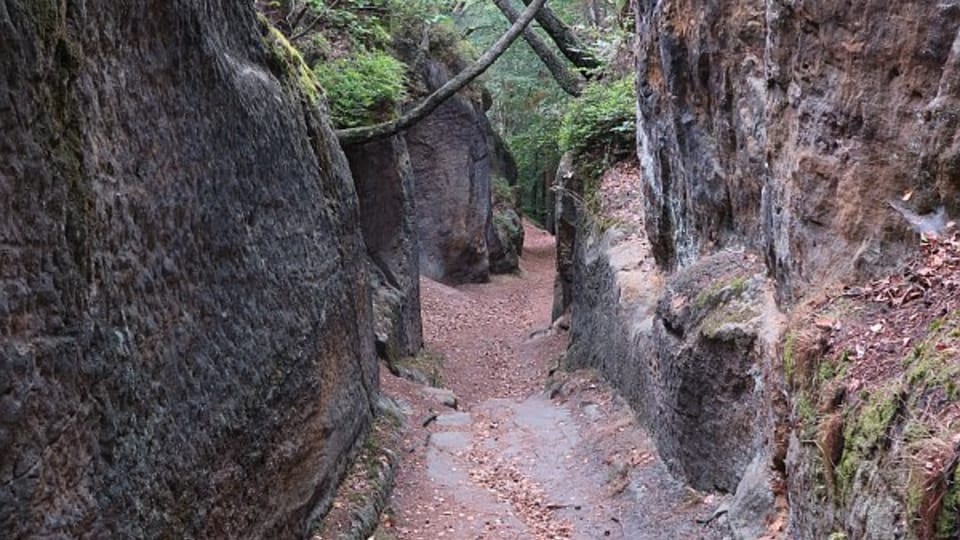 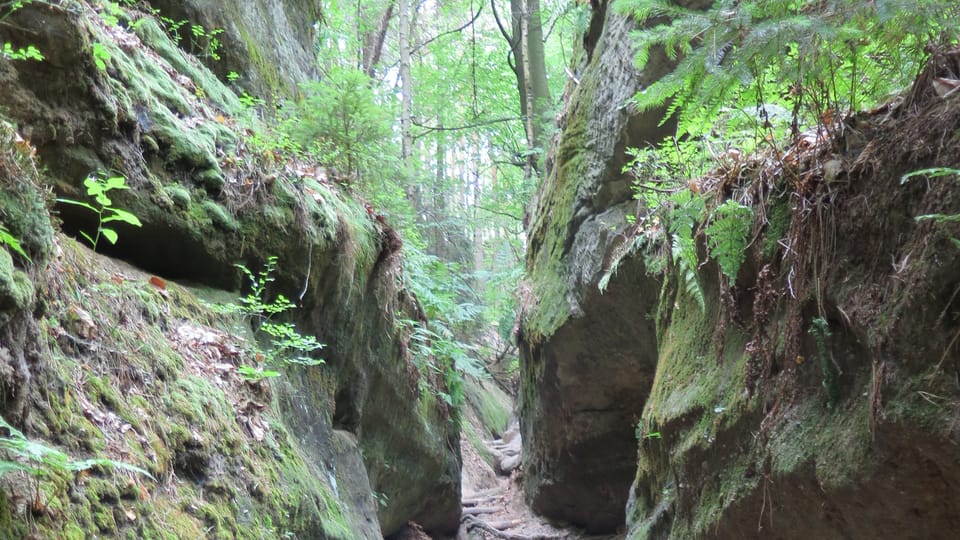 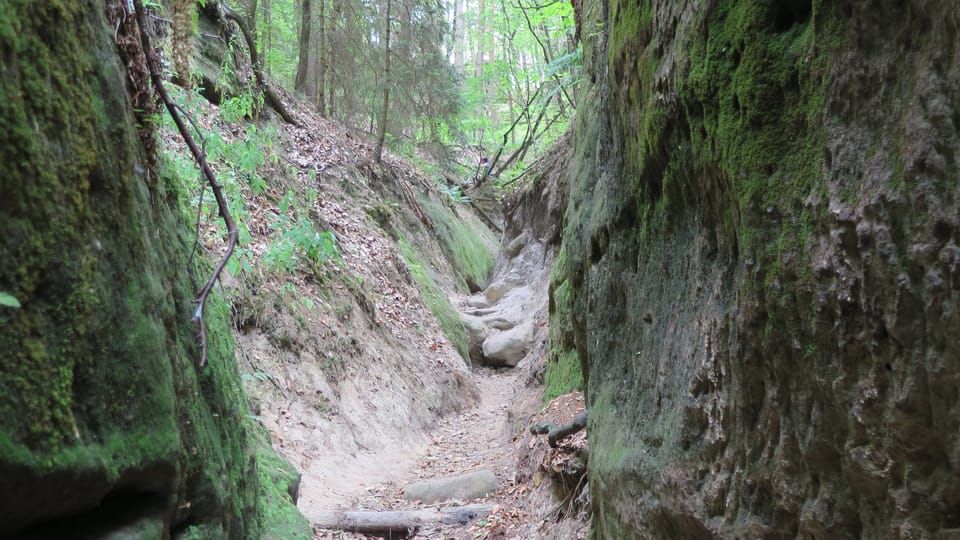 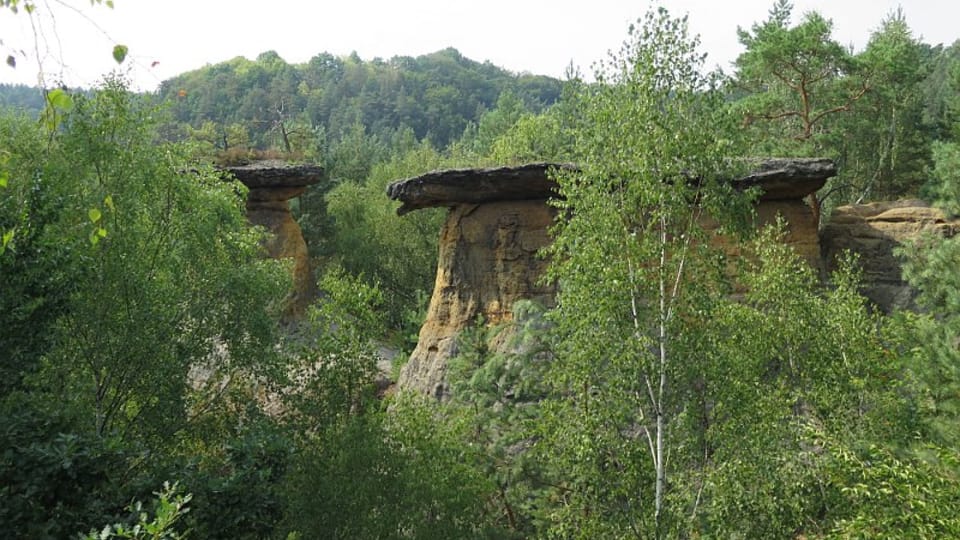 But many of the towns are still dominated by a prevailing sense of grim beige colouring on houses and buildings evoking an ongoing sense of disrepair harking back to communist times. Interestingly, the area just to the north of Mělník was the deepest point inland – very close to Prague – from which the Sudeten German lands were taken from Czechoslovakia in 1938, and the area was predominantly German-speaking until 1945.

While you can get a very good sense of Kokořínsko through a simple bus trip, the reserve is naturally best explored on foot. The very reason why this area is protected is immediately apparent via a walk between Dubá and Mšeno. The entire landscape is dominated by weathered sandstone rock formations creating an assortment of cliffs, slopes and stone slabs. Kokořínsko is filled with hiking trails, and the reserve was recently expanded north-eastwards to include an area called Máchův kraj, which features a large lake called Máchovo jezero, founded in 1367 for fish farming by Charles IV. The lake also contains a small island in the middle housing the ruins of the Myšlín castle, likely abandoned around the same time as fish farming activities began.

Kokořín, photo: Jan Sovka / Creative Commons 3.0 Unported
Speaking of castles, one shouldn’t overlook the namesake of this nature reserve – Hrad Kokořín. Located just west of Mšeno, the relatively tiny structure sits tucked away amidst the hills and forests, its current visage the result of extensive reconstruction undertaken at the start of the 20th century. The Kokořínsko reserve offers a relatively quick, easy and quiet escape from the hustle and bustle of Prague. Well worth seeing...
10
50.430690800000
14.567490600000
default
50.430690800000
14.567490600000
Author: Dominik Jůn
tag:
run audio