The National Museum in Prague is currently running a special Exhibition called “Knights of the Heaven”. As the name betrays, it is focused on the Czechoslovak pilots who fought in the Royal Air Force during World War II. Located in the newly renovated historical building of the museum, it features a massive array of personal items and uniforms of the fighting men, who dedicated their lives to their country, only to be hunted by the communist regime later on.

They were the aces in exile, the legionaries of their age. Yet many would end their days in jails and uranium mines. Incarcerated by the country they fought for. To honour the deeds of Czechoslovak pilots in the Second World War and keep them in public memory, the National Museum in Prague is currently holding an exhibition in its revamped historical building.

The museum’s curator, Ondřej Štěpánek, says that the exhibition tries to bring the pilots’ lives closer to viewers by offering them a comprehensive glimpse into their personal possessions.

“This exhibition is special because it attempts to cover the whole spectrum of activities when it comes to Czechoslovak RAF members. That mean not just pilots, but also navigators, gunners, radio operators and engineers. It displays over 100 original items that belonged to 17 outstanding Czechoslovak personalities, for example Frantisek Fajtl, Vladimir Nedvěd, and Miroslav Liškutín.”

Photo: Magdalena Hrozínková
For many Czechs the names Fajtl and Nedvěd are well known. Today, the last pilots who are alive are ancient men often holding the rank of general, and it may be difficult for some to understand why their contributions were so meaningful.

What is forgotten is the extraordinary danger they put themselves into. Mr. Štěpánek says there were 2,500 Czechoslovak members of the RAF, a quarter of which were pilots. Out of this number more than 500 died during the war, a full fifth of the entire cohort. Casualties were considerably much higher among the pilots, who were most often exposed to direct danger, especially among the members of the bomber squadron, where death rates were highest. More than half of its crews would lose their lives during the war.

Among the bomber squadron members was Vladimir Nedvěd. He was 22 years old when he decided to escape the Protectorate of Bohemia and Moravia, after the Nazis’ closed down the universities in the autumn of 1939.

His journey into Britain alone sounds like the pretext for a screenplay. Escaping through Hungary, he landed in prison, but after being released he went on to make his way through Yugoslavia, Greece, Turkey and Lebanon into France. There Nedvěd joined the Czechoslovak air unit fighting in France, before eventually being evacuated into England through Gibraltar after France fell in June 1940.

He served as a navigator in one of the Wellington bombers of the Czechoslovak No. 311 Squadron and proved his bravery shortly after joining the RAF, says Kristína Kratochvílová from the Museum of Czech and Slovak Exile in the 20th Century, which provided most of the objects for the exhibition from its vast collection.

Photo: Magdalena Hrozínková
“His airplane crashed in Britain and it was fully loaded with bombs. Despite this, Nedvěd went on to save his fellow airmen, because his life was not as important for him as those of his friends. He received the MBE for his effort as well as the Distinguished Flying Cross.”

Nedvěd would go on to become the leader of one of the squadron’s 30-man strong flight detachments, going on to serve in Burma at the Far Eastern front before being discharged and returning to Czechoslovakia in August 1945.

Like so many others of his kind, his career under the Third Czechoslovak Republic seemed promising. He was promoted to Lieutenant Colonel and served as an instructor at the country’s Air Force College. However, the Communist takeover in 1948 meant he and his fellow pilots who had fought on the allied side became persecuted. Nedvěd was lucky. He and his friend hijacked a civilian plane and flew it to a US air base near Munich, where they were able to seek refugee status. He would go on to live out his life in Australia.

Nedvěd was one of the lucky men to live to see themselves eventually honoured by their homeland. In 1996 he was awarded the country’s highest honour, the Order of the White Lion, for outstanding service and leadership in the fight for freedom, by then President Václav Havel. His recorded memories and many other personal items can be seen and heard at the exhibition.

Placed on mannequins and lined up in a row as if on parade, are the many different uniforms belonging to the pilots themselves. Accompanied by objects such as pistols, navigation devices and medals, the Order of the White Lion among them, they give off the feeling that the men themselves are there. 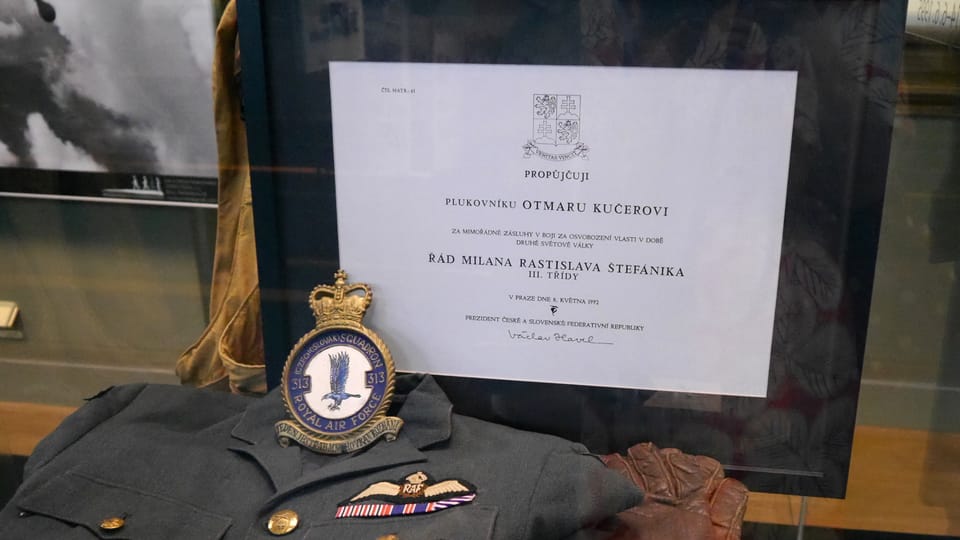 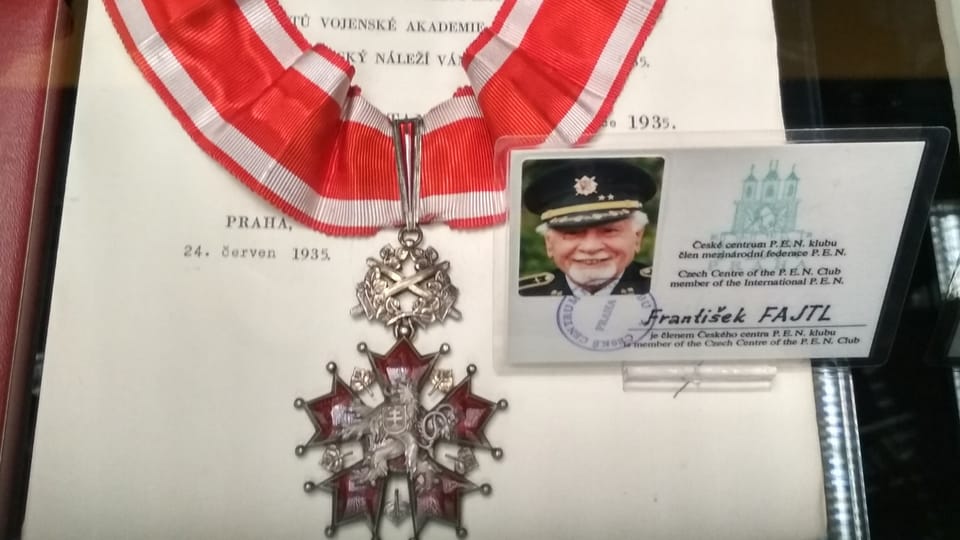 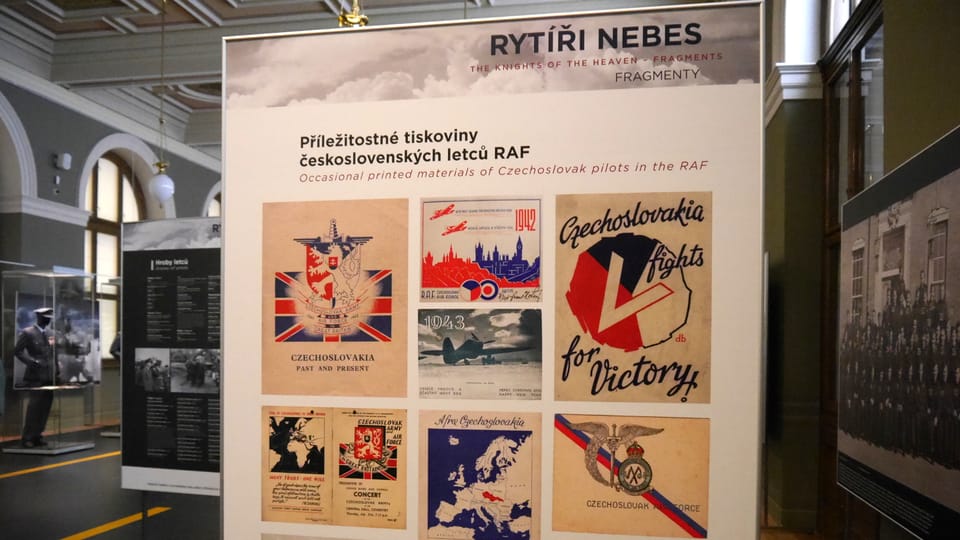 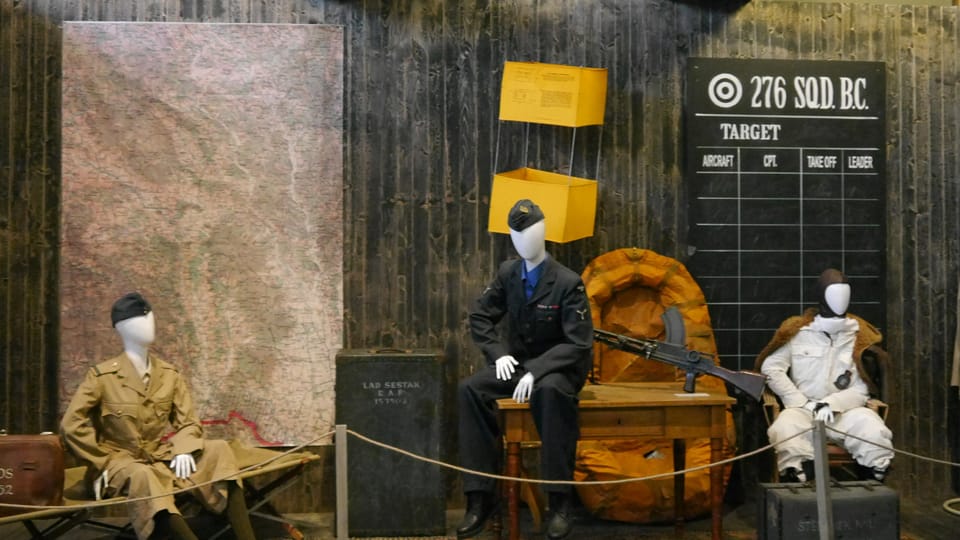 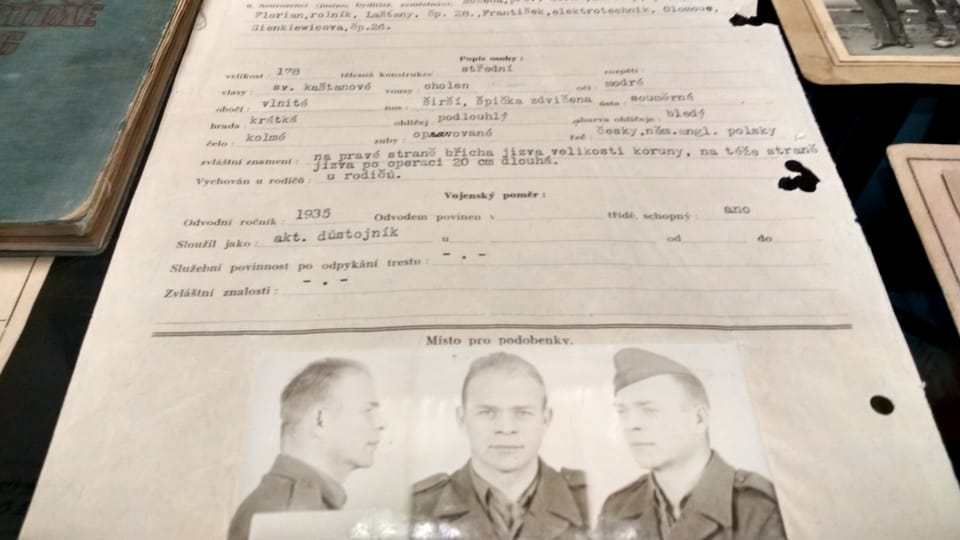 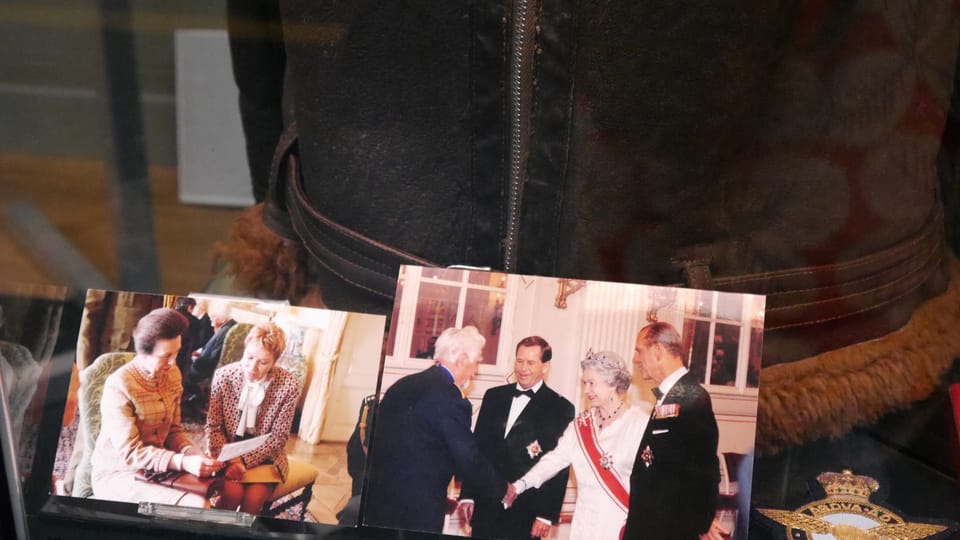 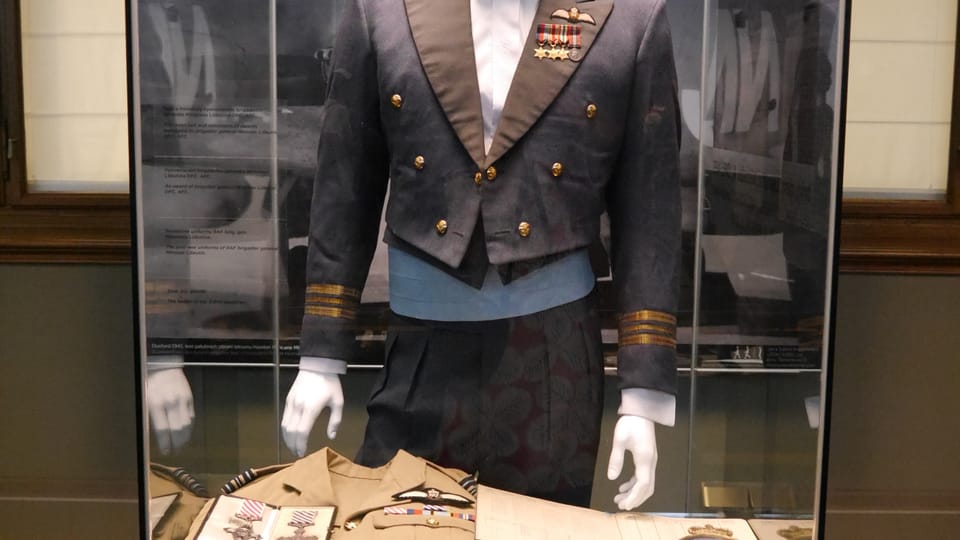 Given the volume, it is understandable that Mr. Štěpánek hesitates when asked about which item he finds most interesting to display. In the end, he settles for perhaps the most elegant item of clothing.

“I would say it is hard to pick out because we have more than one hundred exhibited pieces that belonged to Czechoslovak RAF personnel here. For example, the jacket of Miroslav Liškutin is particularly interesting. It is what he wore during his audience with Queen Elisabeth II in 1953.”

Displayed next to those of Nedvěd and Liškutin is the uniform of a less fortunate pilot, Josef Bryks.

Bryks was an air force pilot already before he joined the RAF, serving in the Czechoslovak Air Force during the First Republic era. Like Nedvěd, he escaped to Britain through the Balkans and went on to serve in the No. 310 Squadron, flying a Hawker Hurricane fighter.

However, he was shot down while fighting over France in June 1941.

Taken Captive by German troops, Bryks was in particular danger as a Czech fighting for the British, says Kristína Kratochvílová.

Photo: Magdalena Hrozínková
“When they left the country they immediately became traitors. When they were fighting against the Germans, they could not wear the Czechoslovak flag on their uniforms, because if they would have been captured, they would have been treated as traitors and executed straight away and not taken as prisoners.”

Bryks lived out the rest of the war as a prisoner. But that does not mean he was inactive in his attempts to escape. Some say he mounted jailbreaks 11 times during his life.

Bryks was certainly involved in one of the most famous – the largely unsuccessful escape action undertaken by allied POW from Sagan prison in Poland in 1943, upon which the famous 1960’s film “The Great Escape” is based. However, the exact number of escapes he undertook is a matter of speculation says the Ms. Kratochvílová.

“We cannot be sure he really escaped 11 times in total, we just think that happened. He was the master of jailbreak, once he escaped in a barrel full of excrement. Our museum actually has all of his diaries which are connected to his life where he lists all of his escapes.”

The Czechoslovak pilot could claim fame already in the immediate years after the war. The 1946 British war drama Captive Heart was based on Bryks’ experiences. But that was a problem rather than an advantage in communist Czechoslovakia. In 1948 he was arrested by the security services and again sent to jail.

By then a celebrity, the prison guards were aware of Bryks’ reputation as an escape artist and after discovering his plans in 1950, the communists handed him a further 20 years in jail. Eventually he was transferred to the uranium mines, where he died in 1957.

Apart from items relating to individual pilots, visitors can also see objects related to the units where Czechoslovaks served. There were four purely Czechoslovak squadrons during WWII, but many Czechs and Slovaks also served in other, multinational squadrons.

For example, some of them made up the 30-man flight group in the No. 68th Squadron, and it was this group of Czechoslovaks that ended up leaving a permanent imprint on the unit, says Ms. Kratochvílová.

“Elizabeth II, then a princess, visited them and appreciated the sight of Czechoslovaks, because they took her to this black cinema where they were training night vision. She said she could not see anything and that the Czechoslovak’s have owl’s eyes, which is why there is a picture of an owl on the badge of the 68th squadron.”

Photo: Magdalena Hrozínková
Furthermore, a few dozen Czech and Slovak women also served in Britain’s air war with Germany. They were members of the Women's Auxiliary Air Force, which was created just before the beginning of the war and exceeded 180,000 members at its height. These women were active in areas such as radar, meteorology, aircraft maintenance and catering. While they were not combatants, they did face the same dangers on the airfields that often came under attack during the opening phase of the Battle of Britain.

The exhibit is also dedicated to them, says Mr. Štěpánek.

“We have portraits of 15 of the women here, as well as a picture which they took with President Edvard Beneš. Furthermore, we also published a special book alongside the exhibition which features all of them.”

The exhibition is likely to be very attractive to anyone interested in military aviation history, or the Second World War, and the splendour of the National Museum’s historical building provides the gravitas for the various objects, many of them the highest honours a country can bestow.

However, filling only two rooms, it is hard not to get the feeling that it could be a bit larger.

The real air war buffs are perhaps more likely to be awed by the artefacts in the collection at the Brno-based Museum of Czech and Slovak Exile in the 20th Century, which Ms. Kratochvílová says numbers in the thousands.

“We have the biggest collection of objects that belonged to Czechoslovak airmen in the world. We have their passports, guns, personal belongings, the pictures of their families as well as all of the other documents, uniforms shoes and more.”

For those with a more general interest, or just visiting Prague, the exhibition, which goes on until January 31 next year, is likely to be an exciting addition to their cultural experience.