American singer Joan Baez was the surprise guest at the opening ceremony of the Forum 2000 international conference on Sunday night. She flew to Prague to personally congratulate the conference's initiator Vaclav Havel on his 70th birthday. Linda Mastalir was there and spoke to the former advisor to Vaclav Havel and Forum 2000 Foundation Executive Director Oldrich Cerny about the surprise performance of the famous singer, who Vaclav Havel once called a great inspiration and influence in Czechoslovakia's Velvet Revolution:

Joan Baez performs during an opening ceremony of the 10th Forum 2000 Conference in Prague, photo: CTK
"I read Havel's latest book and he devotes a few paragraphs to her and remembers her stay in communist Czechoslovakia in 1988 when she was invited to sing at a communist music festival. Havel was with her and in order to avoid getting arrested by the communist secret police he carried her guitar. So, they didn't dare because they didn't want to risk a scandal. Then, when she was on stage, she began by greeting her friends from Charter 77 [dissident human rights group], which was a very courageous thing to do. The organisers switched off the sound and she sang 'a cappella' to 3,500 people and it had a much greater impact than with the sound on. This is what Havel remembers in his latest book and I thought it would be a nice surprise for Vaclav Havel."

How did you keep the secret. Who else was in on it?

"Karel Schwarzenberg who provided her shelter at his place in Trebic. Her long-time friend Honza Urban, his wife and his son, and two other people from the Forum 2000 Foundation. She arrived in Prague today [Sunday], we checked her into a hotel incognito, and we waited for the ceremony to begin before she was brought here."

Joan Baez and Vaclav Havel, background: Mary Robinson and Oldrich Cerny, photo: Linda Mastalir
On another note, we have now officially launched Forum 2000. What are your feelings as this event gets underway for the tenth year?

"I think this was a good start and a good start is extremely important. Hopefully it will continue like this for the next two days. We managed to bring some interesting people to Prague such as Mary Robinson, for example. So I think this is going to be a very interesting conference in uneasy and uncertain times." 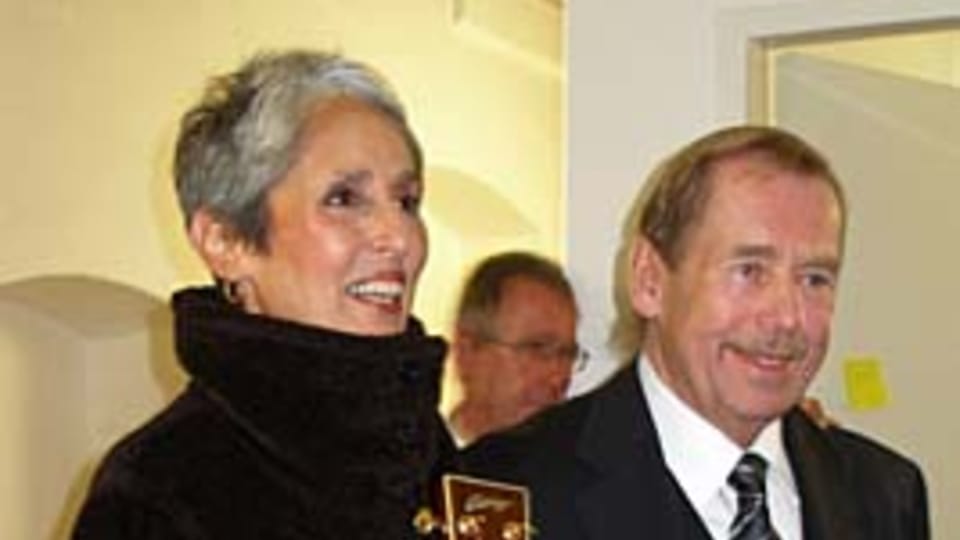 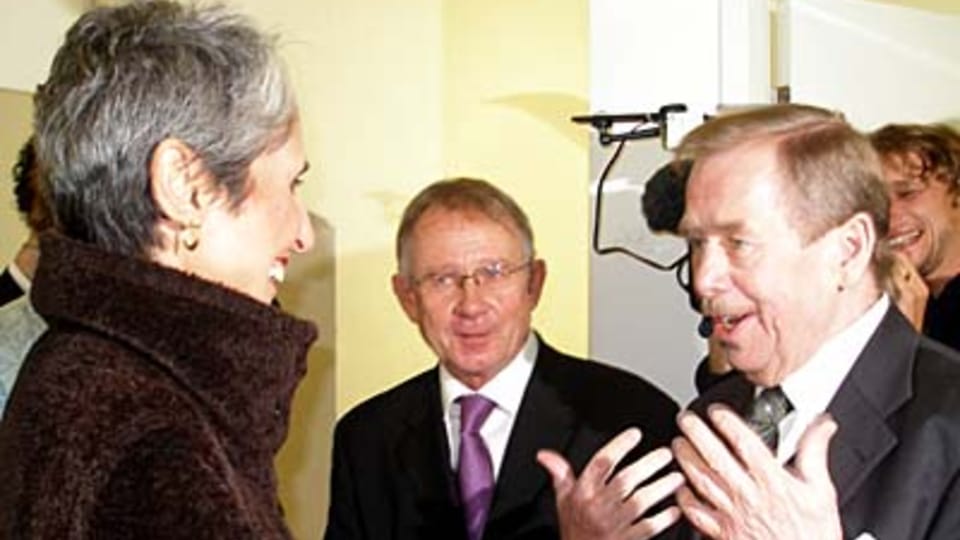